We’ve all seen these numbers, but what to they actually mean? It’s time to get technical

We’ve all seen the T.O. and AN distinctions before WWII era document numbers, but knowing the history of these numbers can give great insight into the information contained within them. As with most things, the military was very organized when creating the system for categorizing their technical documents. It’s impressive to think that during one of the most intensive periods of modern military history, there were people who understood the importance of a well maintained library cataloging system!

The first mention of a “TO” number was as early as 1919, but it wasn’t until several years later, in the early 1920’s that the beginnings of the document numbers we are familiar with started to take shape. However, before we continue, I’m going to jump ahead a bit and give an example of a document number to use as a reference throughout this explanation! 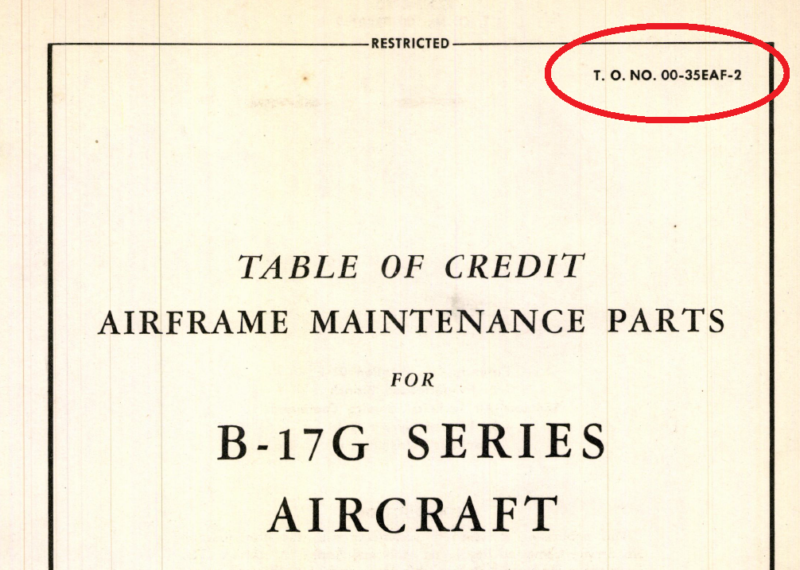 Document numbers for WWII era military published manuals are always found in the upper right corner of the cover page.

It was in the early 1920’s that the first 2 digits of the document number were established – they were called Air Service Property Class Codes. The Class Codes categorized documents into general groups, The chart below gives several examples of the categories that manuals would have been grouped into – look familiar?

Returning to our example document number, and using the class code chart, we can see that our manual relates to an aircraft, by its "01-" distinction.

An Increase In Production Creates Changes

In the 1930’s the number of manuals being published by the military began to increase at an incredible rate, and this called for a more organized and detailed document numbering system. It was during this time that two very important documents were released that are still in use today.

The first of these was T.O. 00-1, titled “Numerical List of Technical Publications”. This manual was a list of every document published and distributed up to this point, and its document number, title, and revision date. T.O. 00-1 was (and still is) an incredibly useful resource when looking for manuals on specific topics, and checking for revision dates. The second manual, T.O. 00-5 covered the document numbering system itself, and how to use and understand the system.

Again, returning to our example document number and using the Manufacturer chart, we can now learn that the "20" found after the Property Class code, indicates that this manual relates to a Boeing Aircraft.

Also during the mid 1930’s, alphabetical Type and Model Codes were added to document numbers, in order to assign manuals to specific airframes. Like manufacturer codes, type and model codes were assigned at random, and did not reflect a system that matched codes to the technical names of aircraft. Below are several early examples of document numbers that cover, and surround our example document number.

Here, by sheer memorization, we can know that this manual is specific to the Boeing P-12E aircraft.

An interesting fact – up until 1936-7, all the information regarding a specific airframe was contained in a single manual! This illustrates both the simplicity of these early aircraft, and how many gaps in technical information were likely present. However, in the late 1930’s aircraft were becoming much more complicated, and manuals much more detailed, and a new distinction was needed to address both scenarios.

The solution was adding an additional digit at the end of the document number that indicated different types of manuals related to a specific model of aircraft. You’ll notice that several of these digits are still used to indicate specific manuals up to modern times, although the names have changed slightly. The chart below lists the TO numbers that would have covered the most basic (and important) airframe manuals for the Boeing P-12E, our example document aircraft.

Finally, we see the whole picture of what this manual is about - Operation and Flight Instructions for the Boeing P-12E!

Also at this time, additional distinctions became necessary to indicate later models of aircraft, engines, propellers, and so on. Separate manuals were not created for these later models, but instead information was added to the existing manual for that series. In order to indicate that a manual now included additional information, a second, and sometimes third letter was added to the document number after the original manufacturer code. Again, these letters did not correspond to the type or model that they were indicating within the manual, so memorization of what these letters meant at the time was key.

The chart below gives examples of how a document number would have changed for a service instruction manual covering the Pratt & Whitney R-1340 engine.

When the US entered World War II in 1941, the bones of the Tech Order system were already in place. However, several changes were made during this period that were more out of necessity than anything else. Up until this point, manuals read like a standard book, with few images and diagrams, and single column text that ran the width of the page. In early 1942 the manual format was changed to double columns of text. This change was made to more easily accommodate the increasing number of illustrations, and cartoons, the latter of which had just started to appear in manuals.

Cartoons and colored diagrams were inserted in an effort to increase interest in manuals, and entice maintenance workers and pilots to actually read them! Cartoons were used with abandon during the war, sometimes being present on almost every page of a manual. Cartoons are often informative on a technical level, but also give the modern reader a peek into the mindset of the 1940’s artist. As can be expected, many cartoons depict women in what we would consider today to be extremely sexist ways. However, they are simply a sign of the times, and I often find myself laughing out loud as I come across them. Some of my favorites are below. 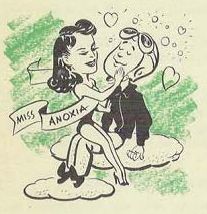 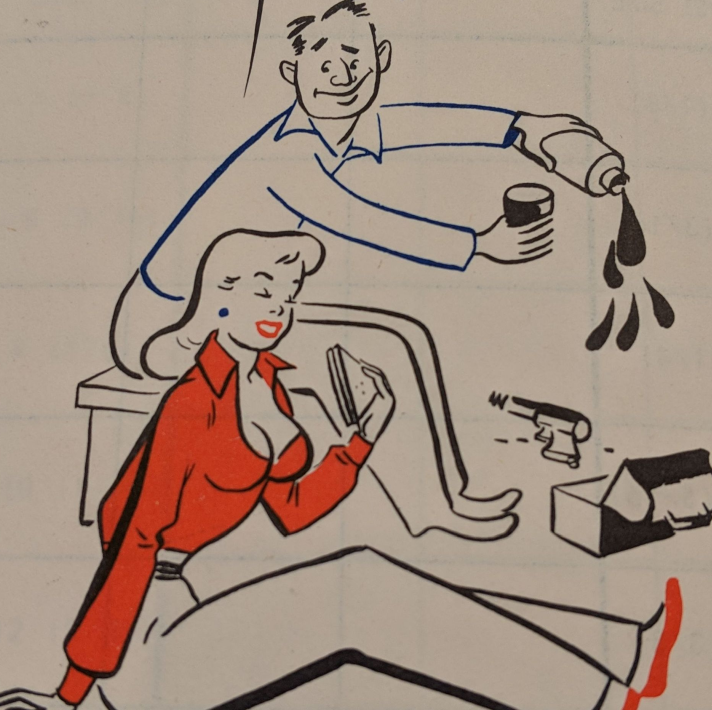 Top left: Miss Anoxia has always been my personal favorite - you get a bathing suit, but it's funny in a dark kind of way. Above: A classic name for a military published pamphlet. Left: Ah, the days when being politically correct wasn't even on the radar!

Another change that occurred in the early 1940’s was a reduction in font and paper size due to paper shortages, likely saving massive amounts of paper given the number of manuals that were being published during the war.

The All Important Parts Catalog

During this time, changes were not only made to conserve resources – in 1942 the Illustrated Parts Catalog that we know and love today became mandatory. Previous to this, parts catalogs were simply lists of part numbers with their corresponding description. Maintenance and factory workers were finding it difficult to identify parts quickly without knowing a specific part number, or identify and find parts on the shelf. The illustrated parts catalog, with its exploded views of assemblies, and detailed drawings solved both these problems, and was a huge benefit to anyone who worked closely with military aircraft. 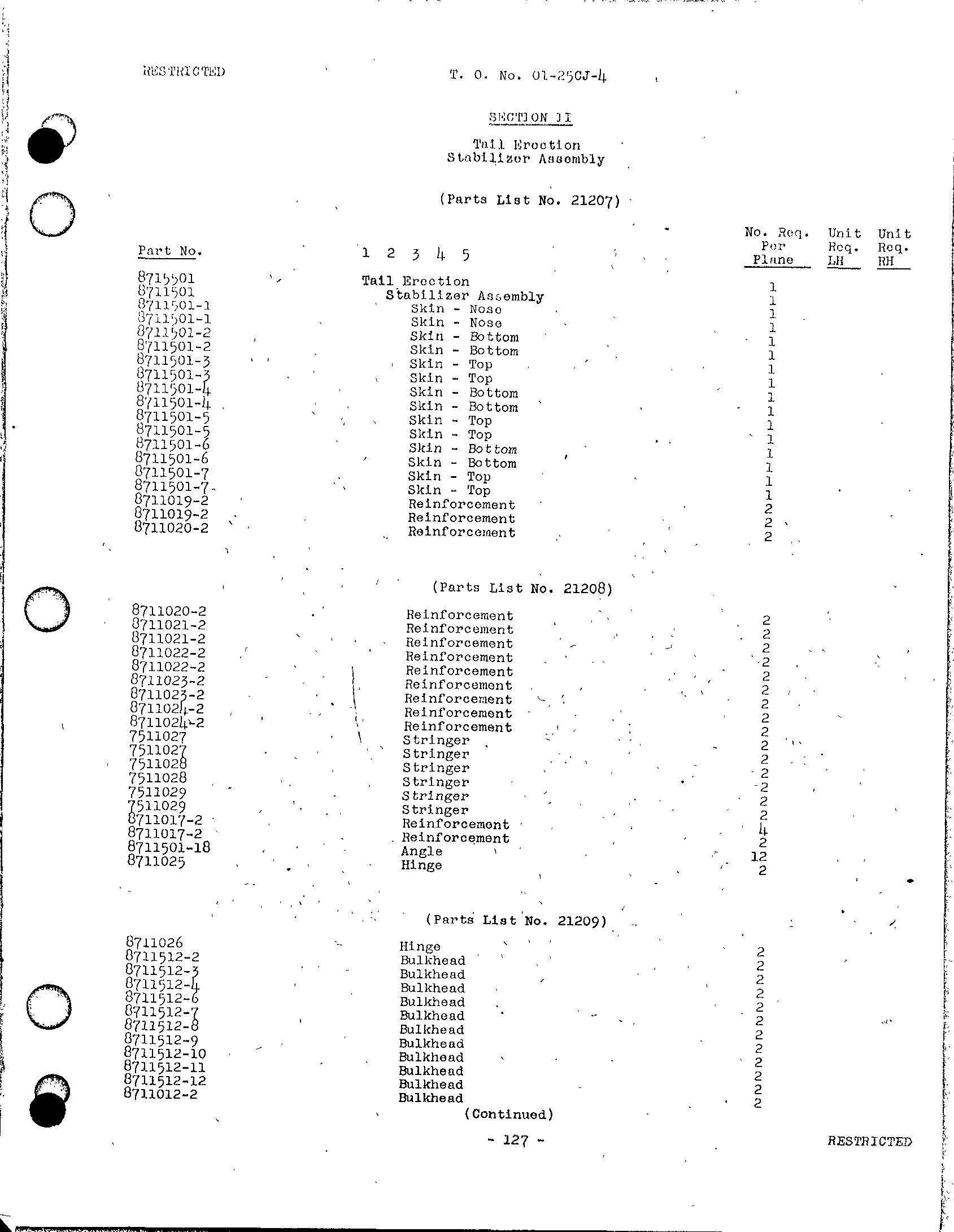 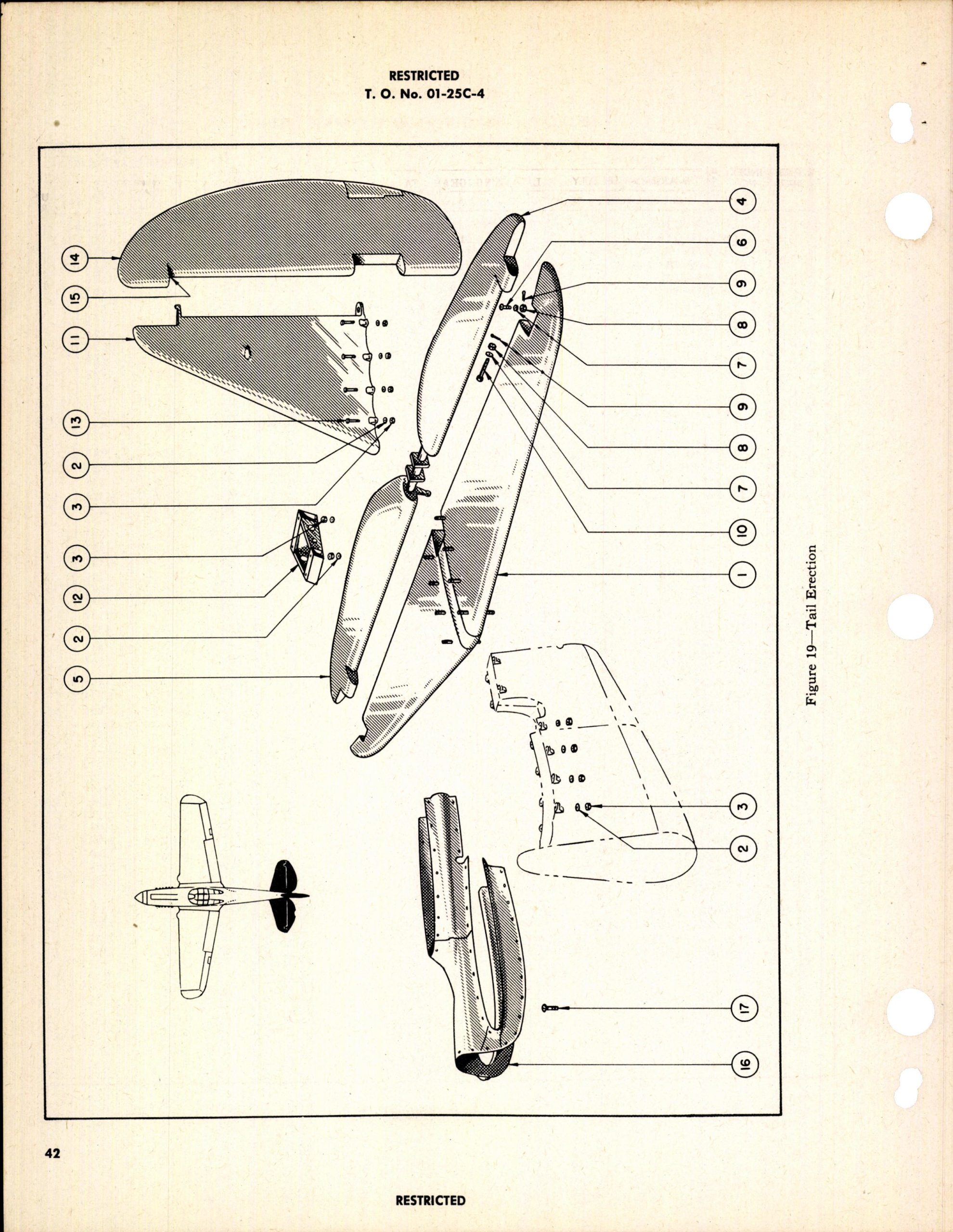 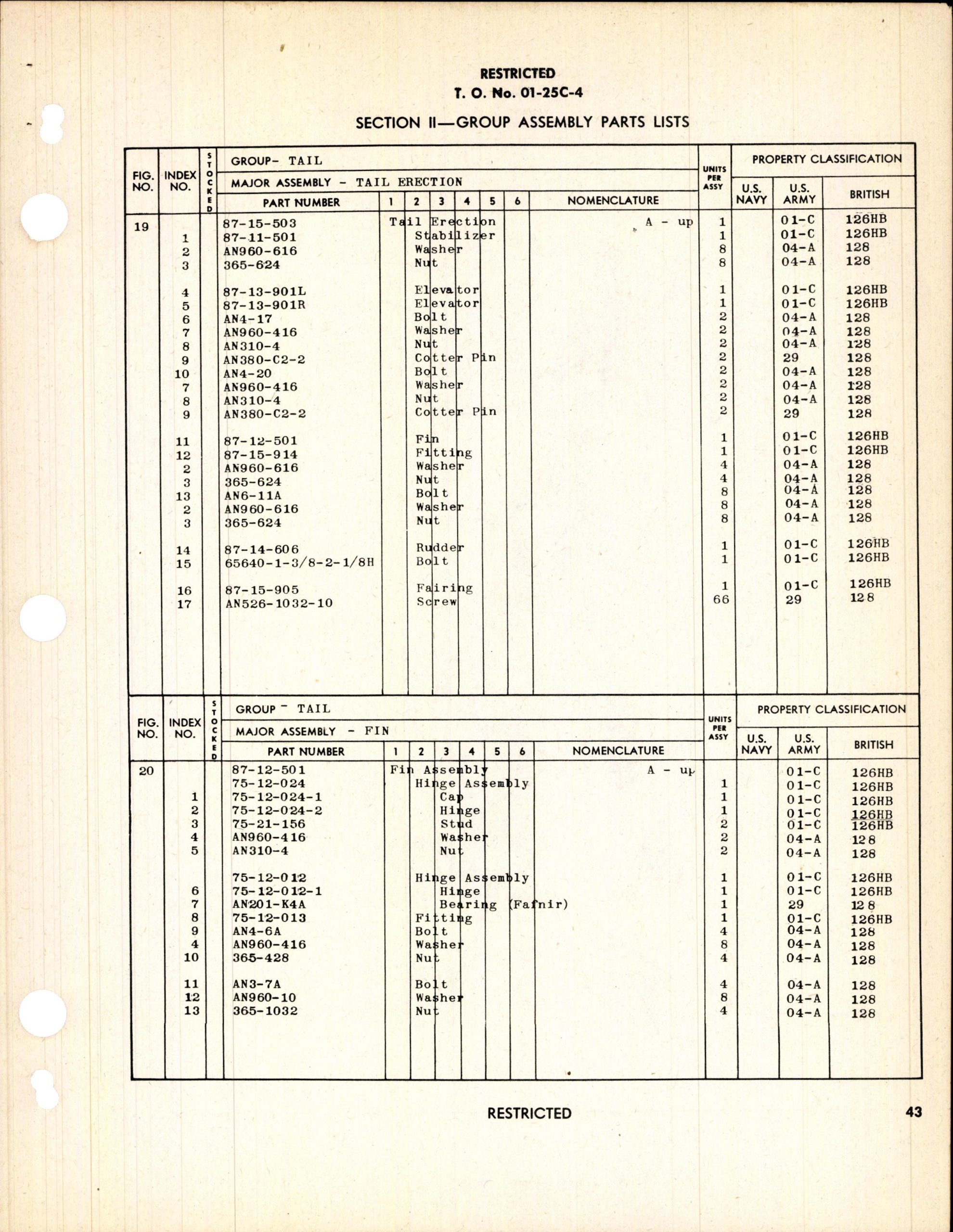 The “AN” Distinction is Born

During 1942, General Arnold merged the Army and Navy document systems to make printing and distribution easier during the war years. Note that up until 1942, all published military documents carried the “T.O.” distinction (standing for Technical Order). This new standardization system lasted through 1953, and changed all documents that were published to carry the “AN” distinction, rather than “TO” (AN standing for Army/Navy).

The Army and Navy Separate

In 1953 the Army and Navy decided to separate their document numbering systems again. While the Navy opted to keep the previously developed AN system (that would later morph into the NAVAIR, NAVWEPS style we see today), the Army went back to the original TO designation, but changed almost everything else!

To make the document system easier to understand, the Army decided to scrap the arbitrary manufacturer, type, and model codes. In their place was inserted the technical designation of the aircraft (or engine) that the manual was about. The example below indicates how a manuals document number would have changed post 1953.

After this new system was implemented, it was estimated that approximately 25,000 manuals would need to be given a new number using this system – no small task! You may have noticed on some later revision manuals that a TO number is listed, but below in parenthesis is the former AN number. The new document number would also have only been printed on subsequent revision packets, unless a manual was completely redone, so sometimes the cover page of a manual will indicate a TO number, and the headers on the internal pages show an AN number.

Those of us who deal mainly with manuals from war years, will be more familiar with the AN system of document numbering, and plenty can be learned from understanding it. I have used the system to organize the internal library of materials that we have at AirCorps, and have also modeled the AirCorps Library website after the system. Using many revisions of TO 00-1 and 00-5, I have also compiled an index that lists exactly what each manufacturer, type, and model code means, not just for aircraft, engines, and propellers, but for all components, ground equipment, and much more (to give an idea, it’s an almost 2,000 line spreadsheet!)

It’s nice to have a system that makes sense, where every manual has its proper place, and not have to reinvent the wheel! Unlike the Dewey Decimal System that only librarians can understand, the TO system can be used for a variety of purposes, including just sounding smart when you’re talking about documents!

We remain fully committed to ensuring a safe work environment while performing essential work and delivering for our customers worldwide. To reach representatives from our team and departments please reach out directly with contact information below. Thank you.