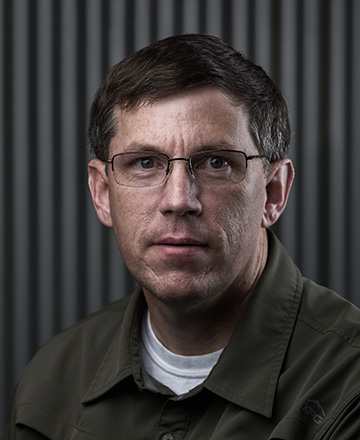 Growing up Mark lived on a small farm in western Washington working with machinery, and always had great interest in aviation. He graduated from Eatonville High School in 1983 and later attended Washington State University. By the time he graduated with a BS in agricultural mechanization in 1987, Mark had acquired a healthy interest in WWII aircraft and also received his private pilot’s license in the fall of 1985.

With the idea that he wanted to find an opportunity to restore WWII aircraft, Mark enrolled in the A&P school in Fargo, ND. While finishing school, he learned that Gerry Beck had started a collection of WWII aircraft in Wahpeton, ND. Mark spent several weekends working with Gerry on the Grumman Avenger, and just before graduating from the A&P program, asked Gerry if he could spend the summer working on his F4U-4 Corsair. The rest, as they say, is history. Mark worked for Gerry at Tri-State Aviation from June 1988 to April 2011. During this time he gained invaluable knowledge from one of the most well-known and respected individuals in the warbird community, and forged lasting relationships with many others. In his 23 years at Tri-State, Mark was involved with the restoration of the Corsair, TBM, T-6, Seafury, 9 different P-51s, and many other aircraft and parts.

Mark made the move to Bemidji and became part owner in AirCorps Aviation after leaving Tri-State. His expertise in restoration practices and encyclopedic warbird knowledge continues to be an asset to the entire AirCorps team on a daily basis. In his spare time, Mark flies his Van’s RV-8 kit plane and works on his Boeing N2S-3 Stearman biplane project. His other hobbies include gun collecting and gold mining.