Our prior AirCorps Library blog post explained the methodology behind North American Aviation’s part numbering system. This week, we will examine the science behind reading and understanding a simple individual part drawing. AirCorps Library has a plethora of North American Aviation resources including engineering drawings, manuals, and specifications for the P-51 Mustang, AT-6 Texan, T-28 Trojan, and B-25 Mitchell. While the part number on a drawing gives a great deal of information about the function of a specific part, an original drawing provides all the specifics that are needed to understand its makeup, manufacture it to FAA standards, and understand its related assembly, and specific airframe applications.

The example landing gear spring drawing (below) referenced throughout this blog post is part number 102-54259, SPRING – LDG. GEAR POS. IND. SWITCH PROTECTOR SEAL. Using this drawing, we will attempt to illustrate exactly how much information it is possible to glean from what looks to be a relatively simple resource. 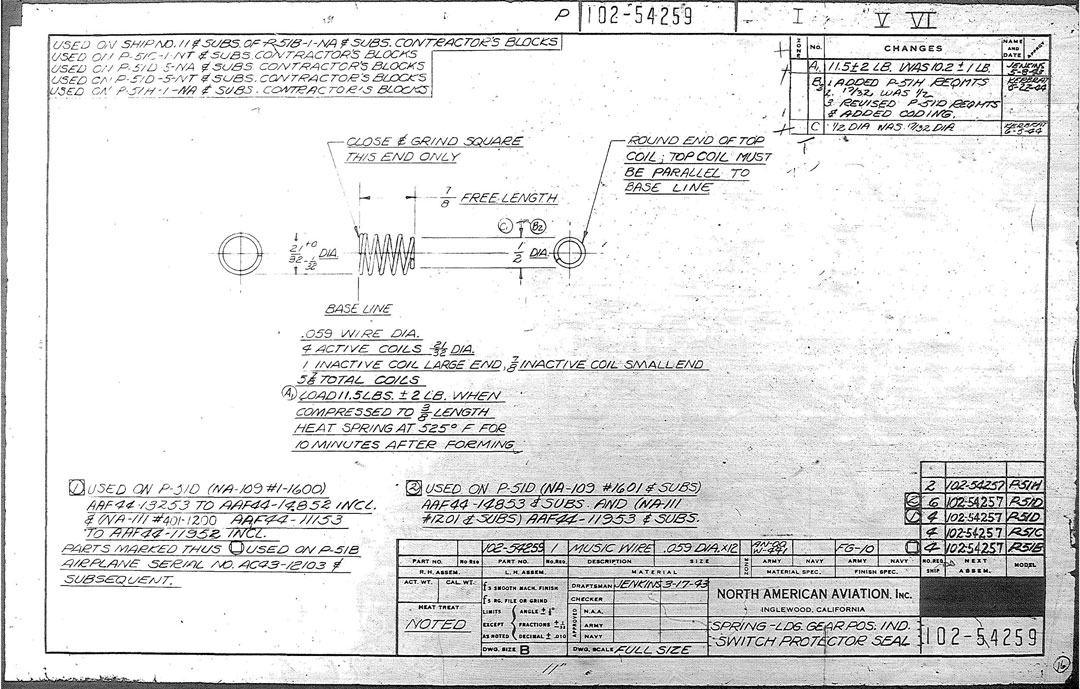 Apart from appreciating the craftsmanship it would have taken to draw this part, and thousands of others by hand, the amount of technical information found on this drawing is incredible. The notes in the upper left corner denote the ships (by model) that this part was used on. The “Changes” block in the upper right corner indicates in chronological order any adjustments and updates that were made to the part during its life. Here, it can be seen that three changes were made between May 1943 and June of 1944, involving the weight and diameter of the spring. On a historical note, the individuals that notated these changes have signed and dated the entries, leaving viewers wondering more about the draftsman who worked so hard to unknowingly provide modern users with important technical information that is still extremely valuable today. We are currently working to implement the ability to tag drawings in Library. With this added feature, members will be able tag any relevant information they choose, including the names of the individuals that created these drawings! With the new ability to search tags, it is possible that we may be able to connect the draftsman with those interested in family history and genealogy worldwide.

The technical information regarding the construction of the part itself is clearly indicated in the title block and notes throughout the drawing. Specifics such as dimensions, gage, and temper are all listed, along with any other particulars that are required to identify, inspect, or reproduce this part. Here we can see notes on the length and temperature of heat treatment, specifics on grinding edges, and the diameter of wire used in production. 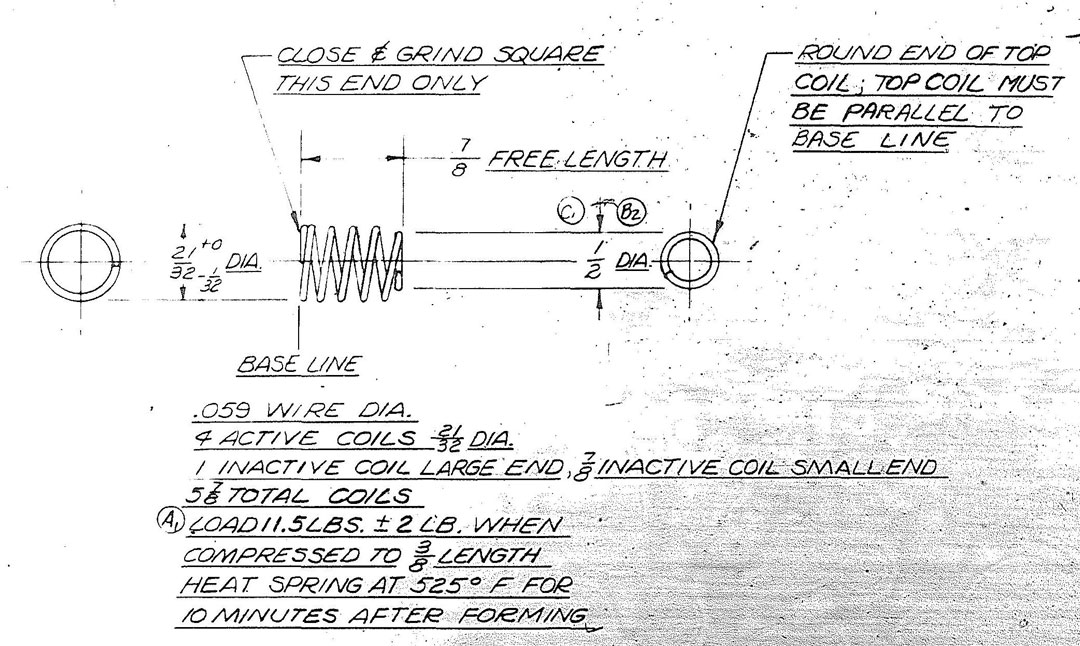 Moving down into the bottom right corner of the drawing, additional technical information is housed in an organized grid surrounding the part number in the corner. The boxes directly above the part number serve several functions. The first column titled “NO. REQ. SHIP” indicates the number of this specific part required per ship (aircraft). The second column indicates the next assembly this part is used and installed on when building the model that is indicated in the third column, called “MODEL”.

Referring to the screenshot below, on the first two lines we can see that two of these springs were needed when constructing the P-51H. Six were required on one contractor block of serial numbers for the P-51D. However, the third line also refers to the P-51D model, but shows a quantity of four springs required. To understand whether the model in question uses six springs or four springs you must refer to the notes depicted by the circled numeral within a box to the left of the NO. REQ. SHIP. column. These notes are the critical link in connecting the aircraft serial number to a component and understanding both the quantity required and the next assembly it is used on. In this case, we can see from note one that the 4 springs referred to in line three pertain to the first 1,600 P-51D models that were constructed (AAF Serial Numbers 44-13253 to 44-14852 / P-51D-5-NA thru P-51D-10-NA respectively) and 800 P-51K models (AAF Serial Numbers 44-11153 to 44-11952 / P-51K-5-NT). Note two specifies that the 6 springs were used on the 1,601st P-51D model and all subsequent models produced thereafter (44-14853 & Subsequent) and the 1201st P-51K model and all subsequent aircraft (44-11953 & subsequent)

The column between the number of parts and model refers to the assembly that the part belongs to and is labeled “NEXT ASSEMBLY”. For the layman, the term “assembly” means the larger grouping of parts that a single part fits into. Assemblies can be large (a completed engine) or small (a pilot control stick). The assembly numbers listed correspond directly to the model they are installed in. Assemblies allow a viewer to effectively “move up the chain” of drawings, allowing for a better understanding of how specific parts work as part of a whole. They also allow users to work in reverse by breaking down assemblies to individual parts (We will follow up with a blog post on reading assembly drawings next). In the drawing above for our spring (P/N 102-54259), the next assembly numbers are the same no matter which model is being discussed.

Below is an image of the seal assembly that our particular spring is installed on: 102-54257 – SEAL ASSEM. – LDG. GEAR POS. IND. SWITCH PROTECTOR. Notice that the original spring is labeled with it’s part number as well, allowing a viewer to identify that part, even if the part number on the original drawing had been obscured! This process can be continued by finding the next assembly, and so on, until the assemblies are extremely large. 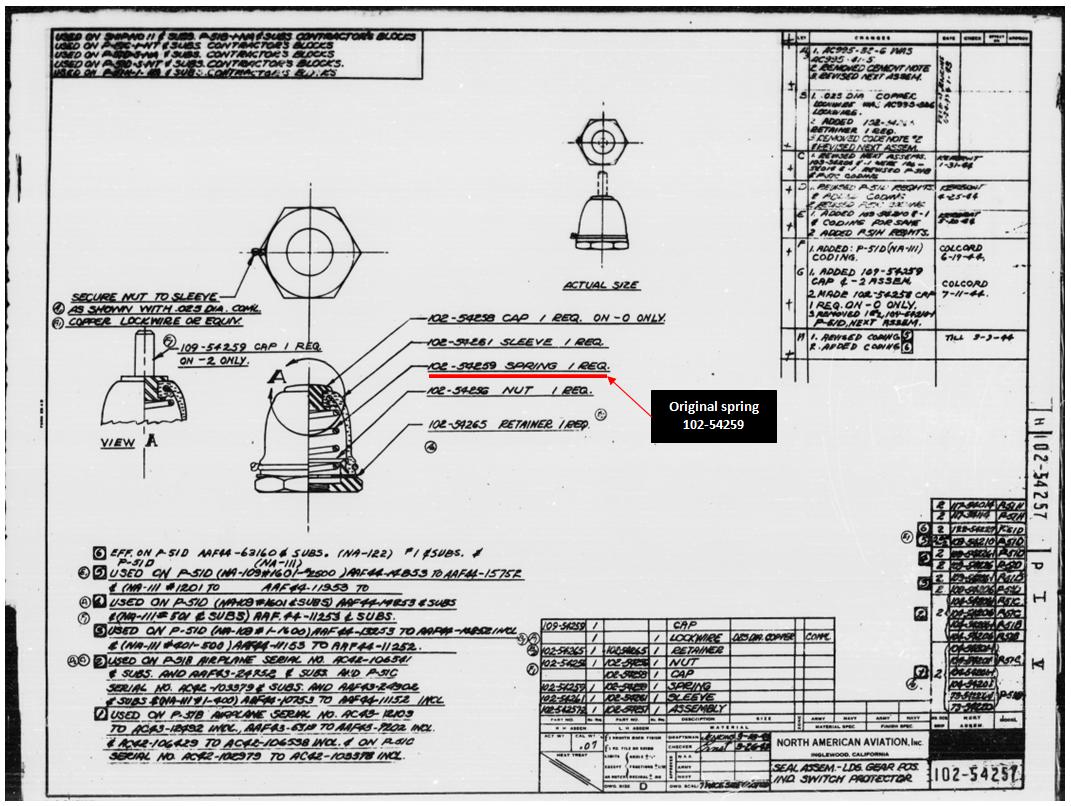 The title block also contains several more fields of important information related to the makeup of parts in the assembly. In the “Zone” area, Army and Navy Material and Finish Specification publications are listed as references pertaining to the part. A description of the material type and size to be used are specified to further to the left, which is followed by the original part number. Below this, is information regarding heat treatment, which in this case needs to be performed as specified in the notes below the spring drawing, and the signature of the draftsman, along with the date. Further below, the drawing size and scale are listed, in this case size B, Full Size.

Bringing it all Together

Much of the information contained in part drawings is extremely helpful to us here at AirCorps whether we are researching, repairing, or fabricating parts. However, this spring drawing is incredibly simplistic and cannot be used as an explanatory example across the board. Although it provides great information, most part drawings are not as straightforward, taking longer to dissect and understand.

Some would say that explaining the complexities of an aviation drawing from 1943 seems irrelevant. However, one of our goals at AirCorps is to understand and use this information to learn, teach, train, and engage enthusiasts, both within and outside of the aviation community. While this spring drawing may seem insignificant among the millions that exist, the ability to use it to teach, makes our efforts at Library seem all the more worthwhile. We believe that this information we preserve on AirCorps Library is incredibly valuable, and we are proud to be able to share it with our members, and continue to acquire and preserve new material.