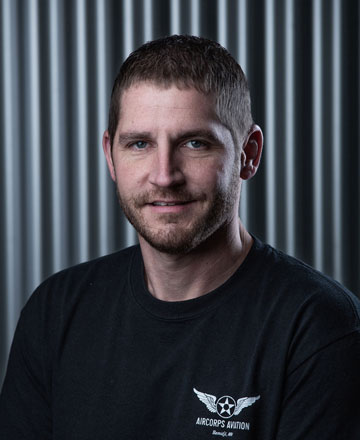 Dan grew up on a farm south of Wahpeton, ND and was always in the shop whenever he could be. His first aircraft project was an rc airplane that he built at the young age of 14 and he’s been flying them ever since. Dan went to college in Wahpeton for Machine Tooling. After his first year, he went to the airport and begged for a job at Tri-State Aviation working for Gerry Beck. Dan got the job, and worked there while finishing school, and continued to work there until March of 2011.

During his time at Tri-State Aviation, Dan worked with Mark Tisler and Eric Trueblood, and in 2011 the three of them made the move to Bemidji to become part owners in AirCorps Aviation, along with managing partner Erik Hokuf. Dan has managed the AirCorps fabrication shop since 2011 which specializes in producing warbird parts and sheet metal forming, along with doing build-to-print work for modern aircraft companies such as Elbit Systems and Dassault Aviation. Dan’s machining experience, and exacting attention to detail, continues to guide the AirCorps Fabrication team to produce the highest quality of aircraft parts.