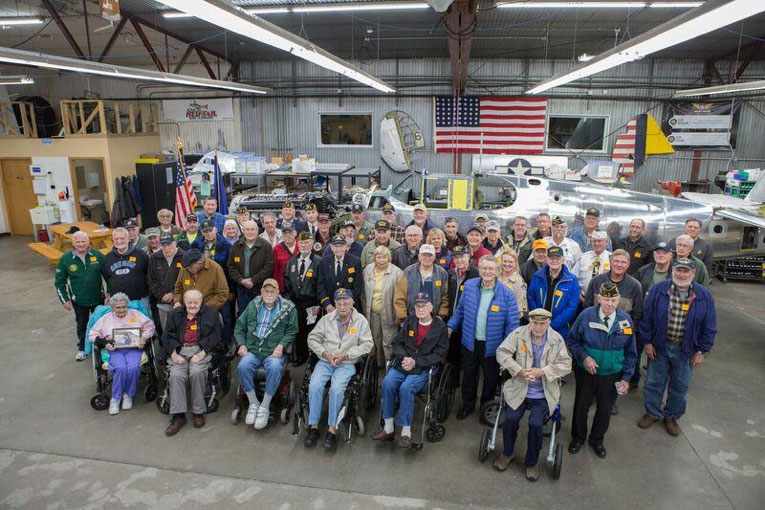 The morning of November 11th, 1944 was clear and cool on the 75th fighter squadron’s base at Chihkiang, China.  The squadrons had been pushed back to Chihkiang by a recent Japanese ground offensive.

Their primitive but effective warning network told them there were enemy planes in the air near their former airfields at Hengyang, Lingling, and Kweilin.

Group operations decided to send up 16 fighters to look for them. Captain Donald Lopez led one flight of eightin his recently painted P-51C, Lope’s Hope 3rd. Donald’s wingman had to turn back with a canopy problem halfway to the target, leaving seven Mustangs.

It was his 100th combat mission and was supposed to be Captain Lopez’s last, but it didn’t turn out that way.

The other flight of eight was led by Captain Stanley Kelley, a recent arrival who had prior ETO combat experience.  Lopez headed for Lingling and Kelley to Hengyang.

Japanese planes weren’t in the immediate Lingling area where they went first, so Captain Lopez turned toward Kweilin.  Right after the course change, Lopez heardKelley get on the radio and call him: “We found ‘em. They’re at Hengyang. Come on up here!” and he altered heading to go and help over Henyang. It was a thirty minute flight to Hengyang, even at nearly full throttle.

Once at HengyangCaptain Lopez’s flight circled, looking for other aircraft. Fifteen Japanese planes were spotted several thousand feet below, flying toward Lopez’s flight.

The P-51s dove on them and Donald picked one out to attack. It waslater identified as a Nakajima K -84 “Frank” but heinitially recorded it as a Zero in his log book.  He saw strikes on the engine as he fired at the unaware Japanese fighter.  Heavy smoke poured out and Lopez claimed it as a probable victory after losing sight of his quarry. Another member of his flight had a probable claim. Both victories were later confirmed. Donald’s victory was his last of a wartime total of five and qualified Captain Lopez as an ace.

One of the characteristics of the C and B model P-51s became an issue as he lined up on another enemy.  His guns all jammed as he began firing and his chance at another victory was lost.  This was a common occurrence during heavy maneuvering in Bs and Cs, probably due to the tilted guns.  The later D models rectified this problem by mounting the guns upright. Contrary to some opinions, it wasn’t necessary to make the wings thicker to accomplish this on the D model.

Kelley’s flight was already back at Chihkiang when Lopez landed.  His flight had been surprised by a mixed group of Oscars, Tojos, and Franks. They lost four Mustangs in the fight and claimed four enemies shot down with two probables.  Those two probables were also confirmed by Chinese intelligence for a total of nine enemies shot down on the mission.  Three of the four lost 75th squadron pilots shot down on November 11, 1944 survived. One was taken prisoner and the other two made it back to the squadron.  All three survived the war.

Both flights refueled and rearmed and headed back to Hengyang with 12 Mustangs.  No more enemy activity was found.

This second November 11th mission made 101 for Captain Donald Lopez and it was his final combat mission of World War Two.  Some pilots had been lost after over 100 missions in the CBI and at this point in the war, replacement plots were not in short supply, so CBI pilots were supposed to fly no more than 100 combat missions. 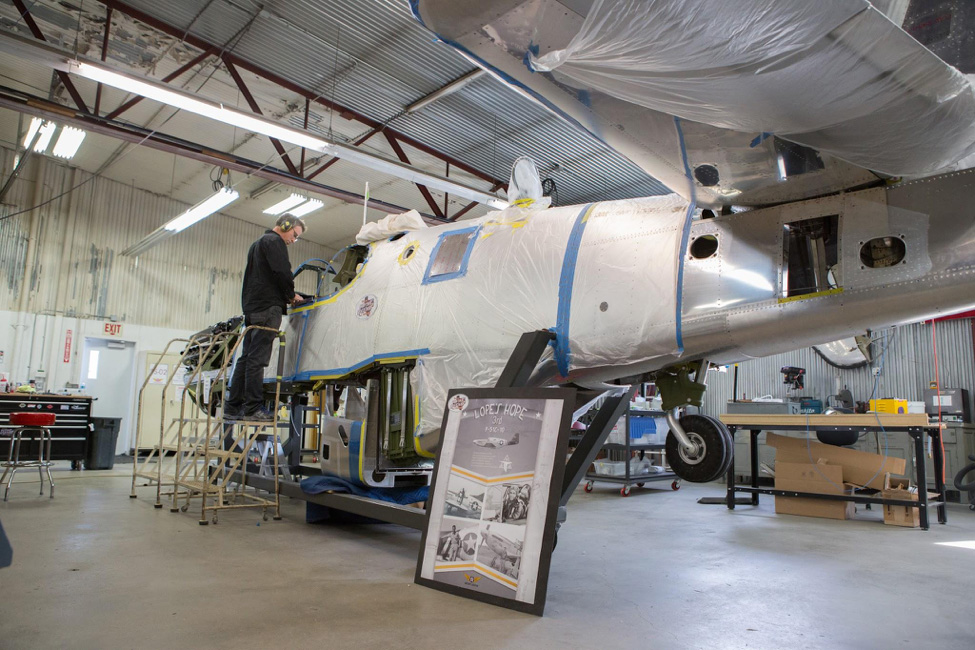 Lope’s Hope 3rd is in the restoration facility with Ryan looking over the cockpit area. 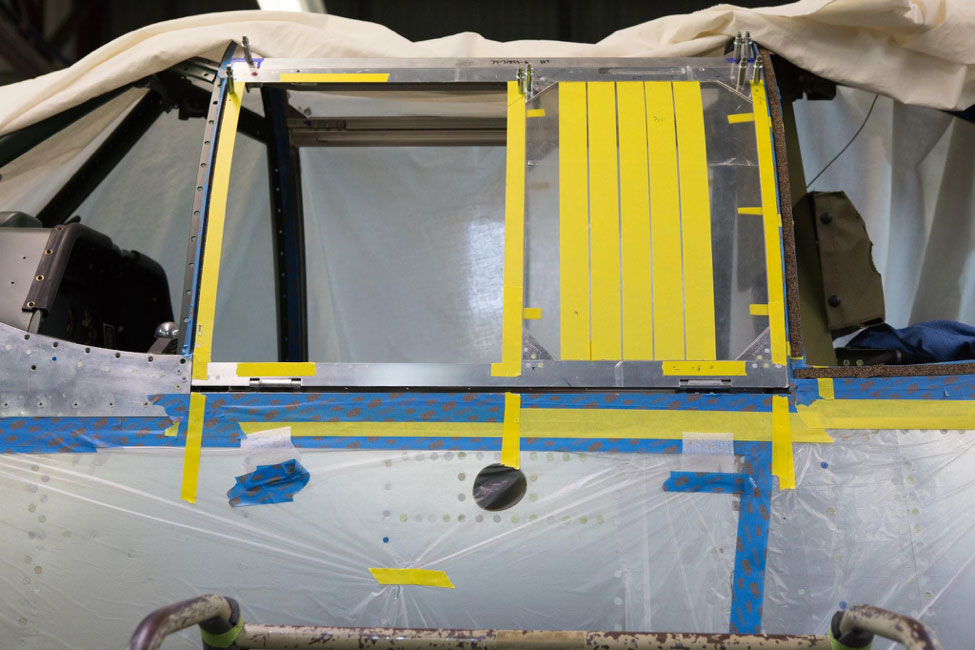 The side window of the cockpit enclosure isn’t easy to fit. 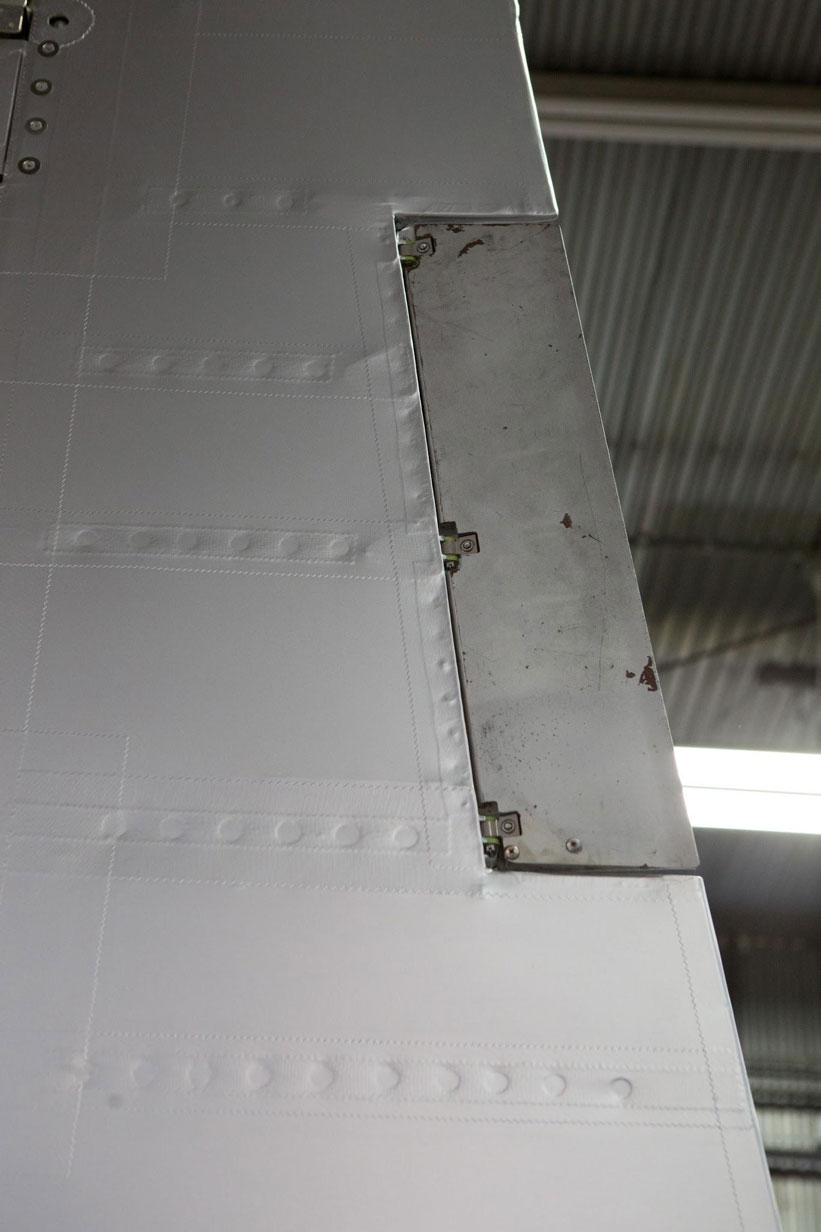 The rudder trim tab shows up well in this image. 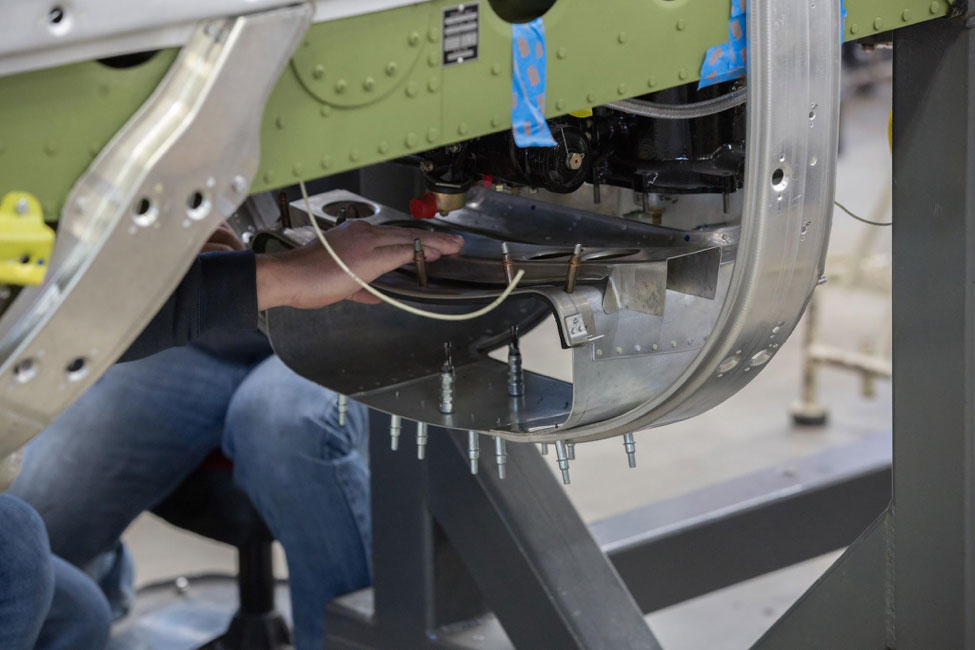 A lower cowl former is in place as the air intake ducting is fitted for final installation. 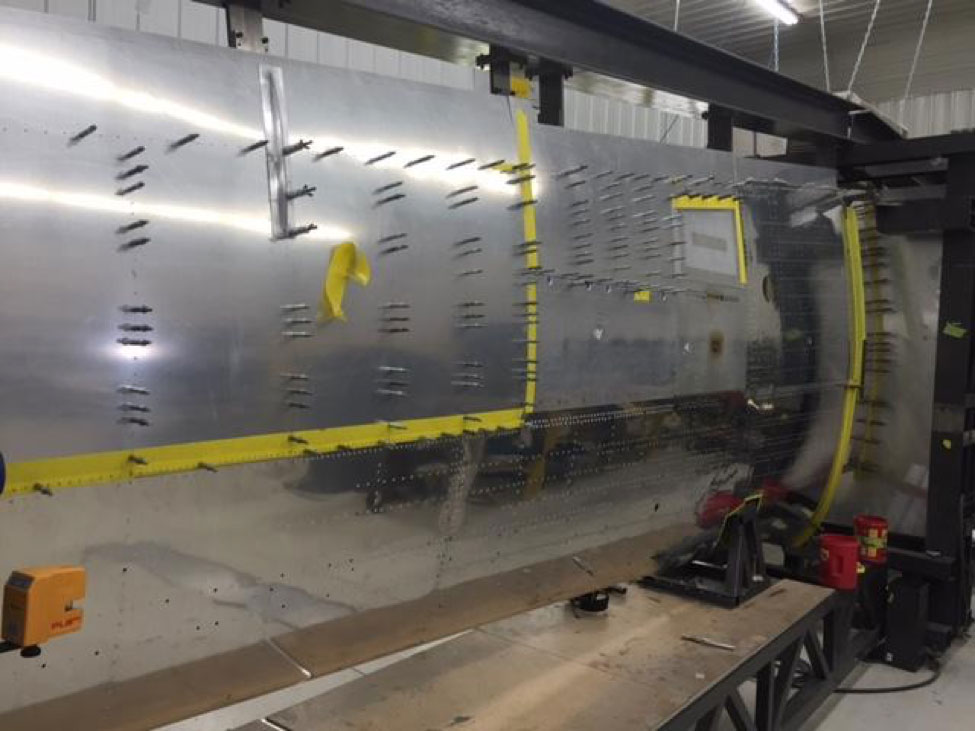 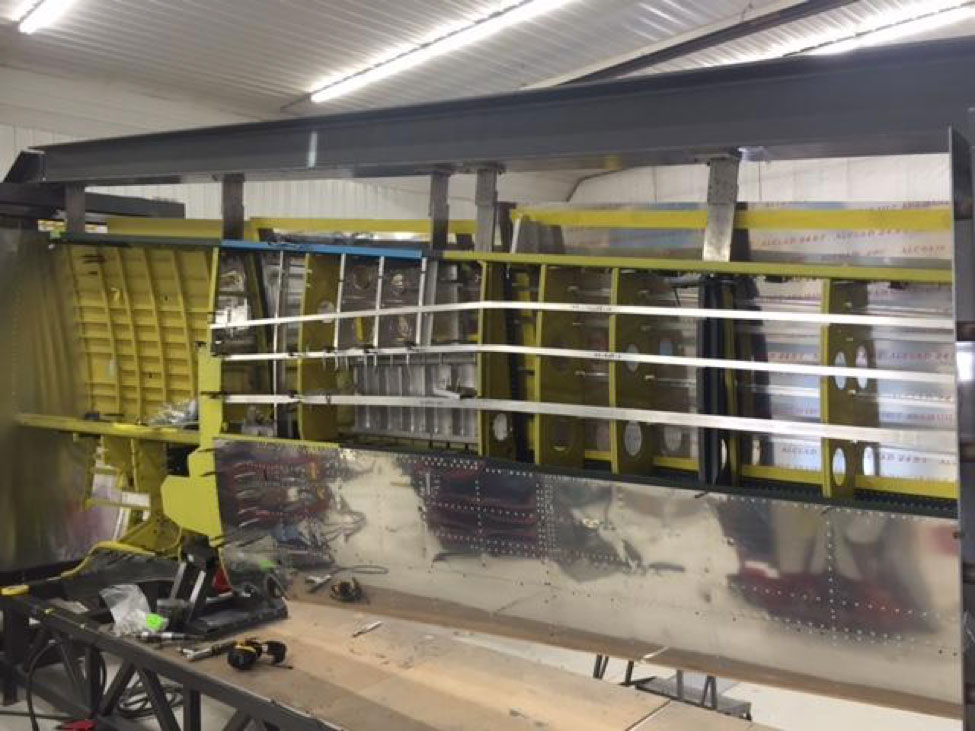 The forward skins are riveted on in this view under the right wing. 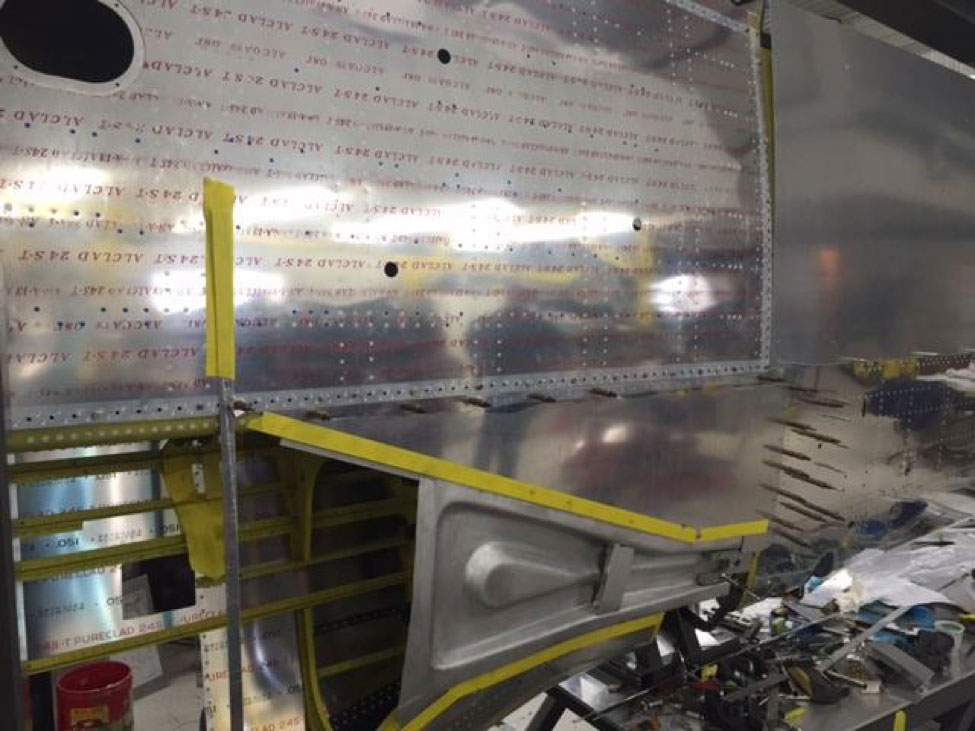 Skin pieces as well as the inner skin of the main gear door are fitted in this later view. 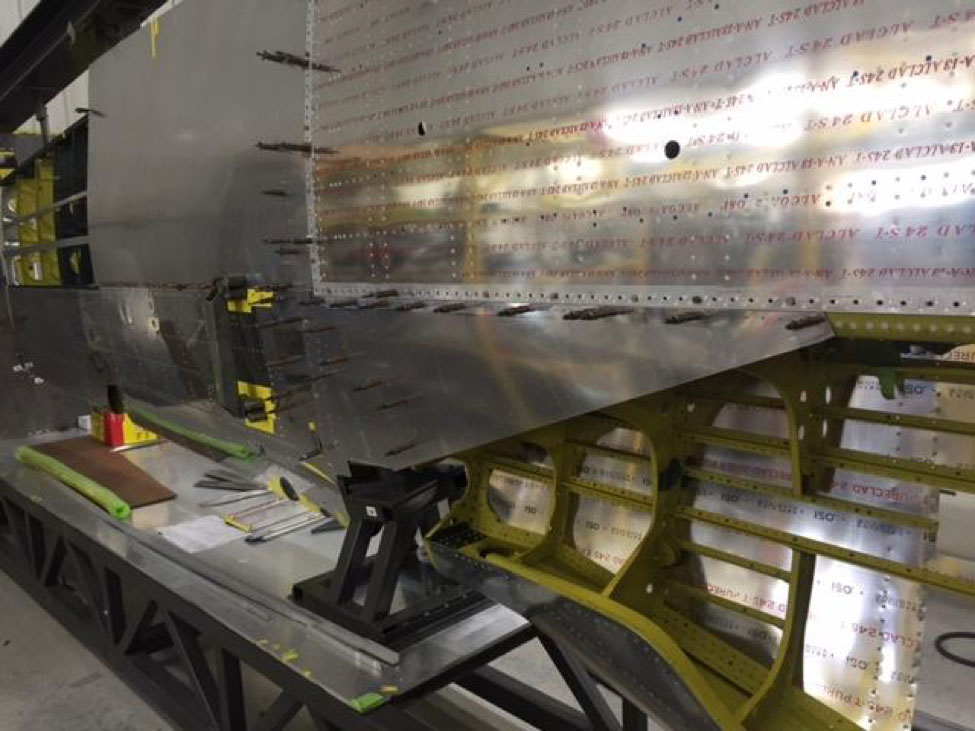 The lower left side of the wing is also progressing nicely. 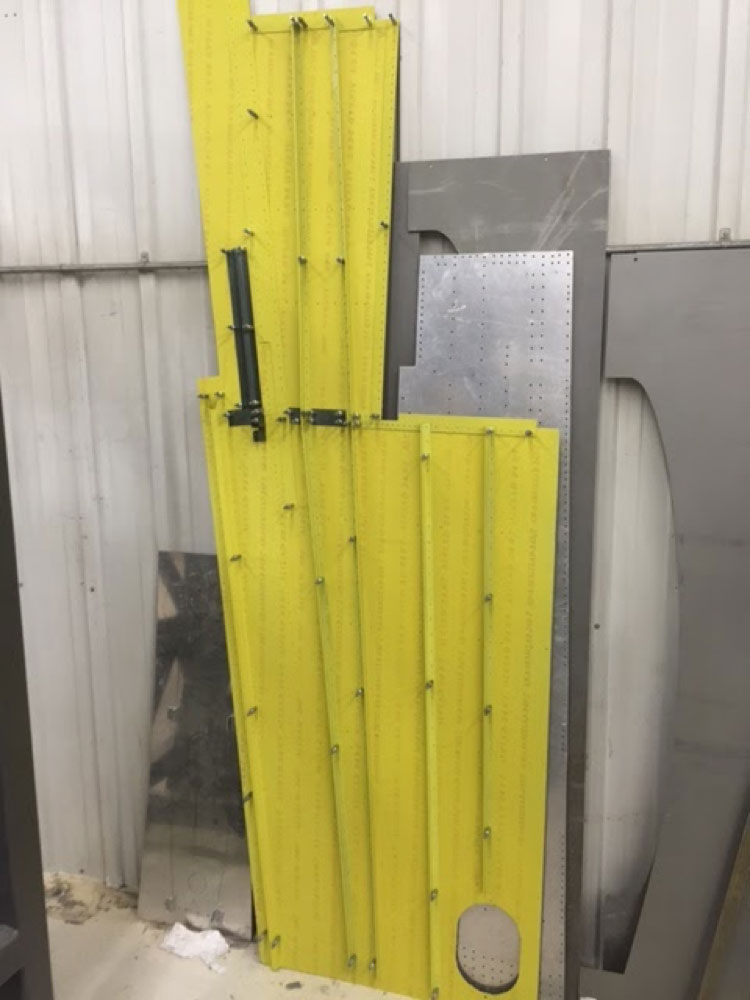 Here we have a section of outer wing skin. 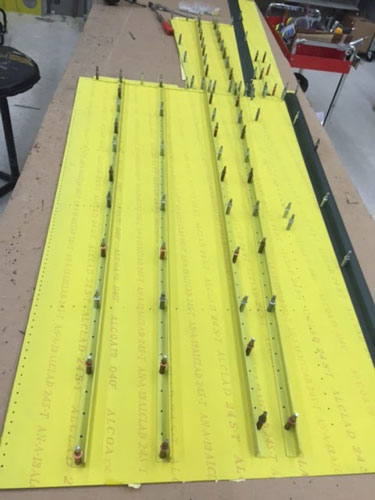 The same piece is now laying on the bench.