John owns Blayd Corporation, an aerospace product and parts manufacturer.  John made the decision to build an A6M-2 Zero. To begin with, Blayd Corporation used parts from a wreck that was discovered in the Ballale Island jungle in 1965 .  Ballale is in the Solomon Island chain.  In 1968 Bob Diemert recovered several wrecked Japanese aircraft from that site.  A few of those parts were used and more were used as patterns for fabricating new duplicates.

Ballale Island is about 560 miles from Dobodura, where our P-47 was abandoned.

It would be great if they could be connected as possibly opposing one another in a combat situation.  However the paint scheme of the Zero is one that was downed in 1943, while the P-47 didn’t exist until March of 1944. This particular Zero, painted as A1-1-129, is a Nakajima-built A6M2 s/n 1498. The paint scheme is from one of the very few Nakajima built A6M2s for which, at the time, both the tail code and serial number were known. This was A6M2, s/n 6544, tail code A1-1-129, downed over Russell Island on 4 February, 1943. This Zero was photographed by the Americans when they occupied Russell Island. Some artifacts which confirmed the serial number were also collected. The tail code identified this aircraft as being from the carrier Zuikaku. The serial number 6544 also provided a date of manufacture in late December 1942. Given the markings and date of the loss of A1-1-129 ,it must have been flown by one of the two Zuikaku pilots lost on February 4, 1943. Circumstantial evidence seems to suggest that the pilot was PO2c  TANAKA Sakuji. 1

The Zero and the Texas Flying Legends‘ Corsair had a minor taxiing accident at Midland, Texas, enroute to the Los Angeles County Airshow.  There were no injuries, but the Zero requires some repairs before rejoining the airshow circuit in 2017.

With that goal in mind, Aircorps Aviation has been tasked with repairing the fuselage and empennage structure.

Picking up the Zero parts at Blayd Corporation

Blayd Corporation, the original manufacturer of the beautiful A6M-2 had already made many parts that will become necessary for the repair.  Their first class work on starting the process will do much to speed the date that the Last Samurai retakes the air.

The parts  were boxed up and shipped across the border to AirCorps’ Bemidji, Minnesota facility on January 20, 2017. The cooperation of Earl Calverley and the other folks at Blayd was very much appreciated.

Here Hunter is working near the back end of the fixture. This isn’t the more familiar Mustang or Thunderbolt and both guys need a little thought before proceeding. 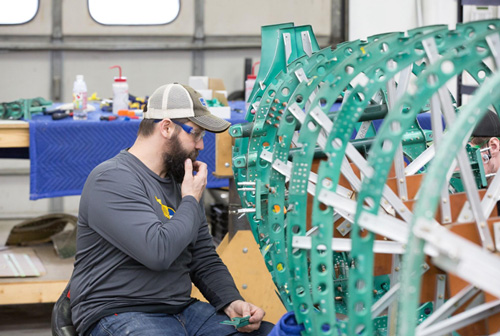