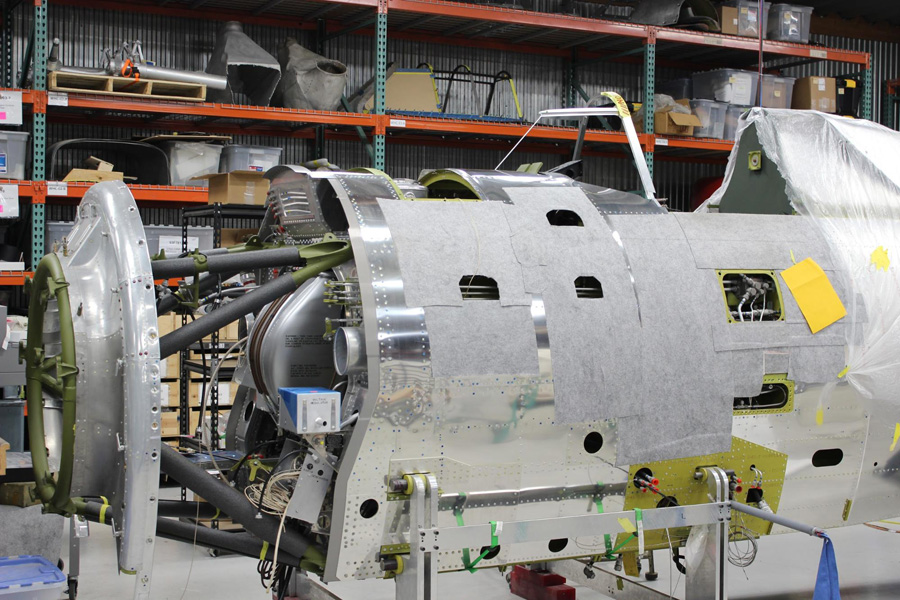 Grey protective felt has been attached to the forward fuselage for protection as restoration continues.

The P-47 is progressing nicely. This month we will look at some fabrication shop work, fuselage and cockpit restoration progress, and several details of the wing restoration.

It has been a while since we highlighted fabrication shop work, but parts are constantly being created as they are required by the restoration shop.

Aaron continued working on cockpit installations this month. One of the major items was the main switch box.

Creating a new set of wings is a complicated task that has been ongoing for months now. But progress is made every day.

One of the interesting facets of the restoration of P-47 42-27609 is the radio equipment, because the mounting had to be changed to accommodate the Christmas tree tank. The tank was placed where the radios originally mounted.

Despite being reequipped with SCR 274 comm radios, the airplane contained a terminal strip for an SCR-522, which wasn’t used for SCR 274 installations. It also had a BC 966 IFF (Identification Friend or Foe) unit.

The BC 966 was normally used with an SCR 522 comm radio, so it seems that 42-27609 left the Evansville factory with the very high frequency SCR 522. At the time it arrived in Townsville, Australia, the Fifth Air Force was using the high frequency SCR 274.

Since the P-47 had SCR 274s installed, they were undoubtedly installed upon its May arrival in the SW Pacific theater.

During the time span of 42-27609’s service, a June 16, 1944 Fifth Air Force order came out, requiring the squadrons to remove the Christmas tree tanks. There were three primary reasons for the order. One was because of the fire hazard they presented, the second was to facilitate the installation of VHF radios, which would be SCR-522s. The final and perhaps most important reason, documented in James Curran and Terry Poprovaks’ fine book, Check Six, was “Aside from the supposedly better communication thus afforded, such a change was essential in order to communicate with naval aircraft.”1 This modification is also documented in the squadron histories of several 5th Air Force squadrons.

This conversion back to the SCR 522 VHF radio was never done to 42-27609, nor was the Christmas tree tank removed. Because that is true, it is unlikely that 42-27609 saw actual combat after July of 1944 when those changes were implemented at squadron level.