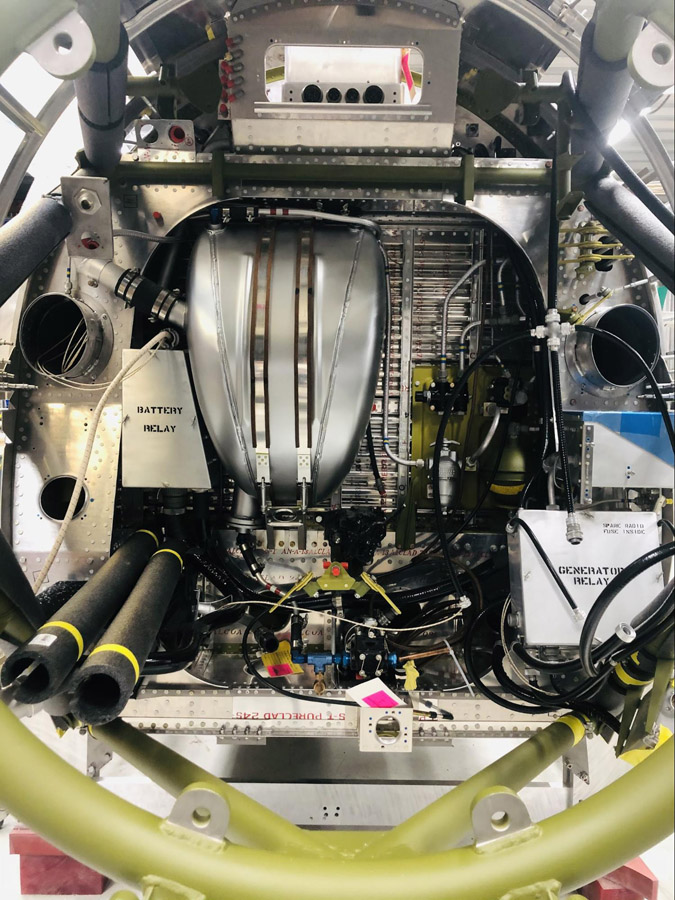 This view is through the engine mount and shows the firewall with relay boxes, oil tank, and other accessories in place.

This month work on the secondary cowl and turbosupercharger connections began. The modified oxygen bottle brackets were installed. Progress on the wings and cockpit systems continued. This restoration has been a long process, but every little step brings us closer to the test flight of the only Republic built Razorback under restoration.

The wings gained some skin panels, extrusions around the gear openings, and inspection panels this month.

42-27609 has a non standard location for the oxygen bottles that was necessitated by the field installation of the Christmas tree fuel tank. 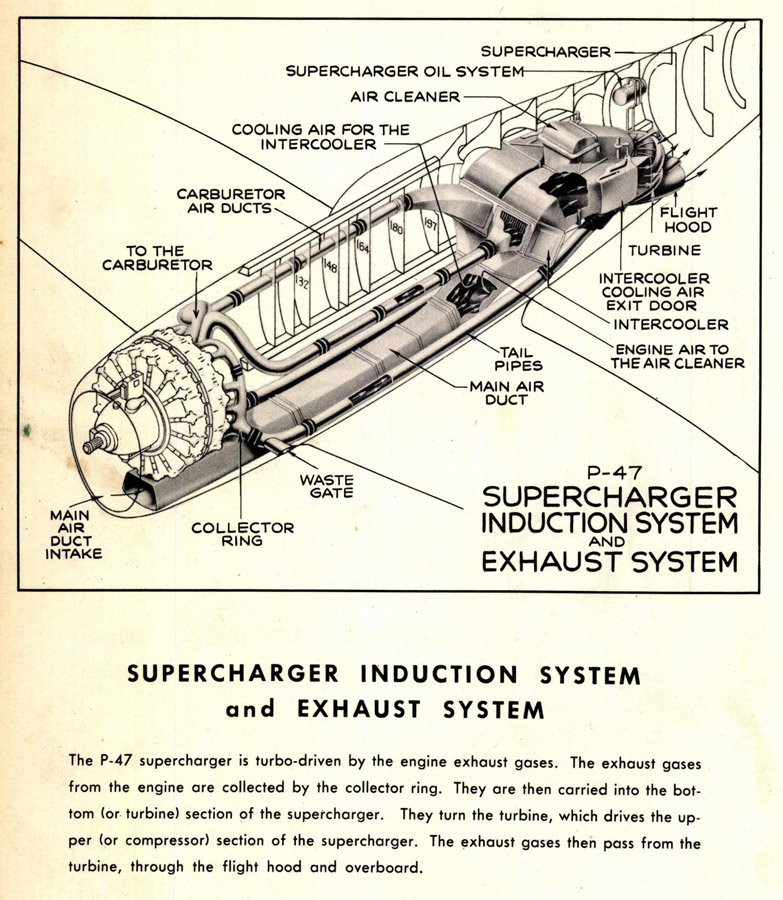 The P-47 had the ability to perform well at high altitudes as an escort fighter or in air to air combat, but it also could operate at low altitude as a fighter bomber with great success. That flexibility was attributable to its Pratt & Whitney Double Wasp R-2800, twin-row, 18-cylinder radial engine and a complicated turbosupercharger system.

The turbosupercharger system made the P-47 Thunderbolt a complex fighter for the time period, perhaps the most complex single engine fighter in the American arsenal. 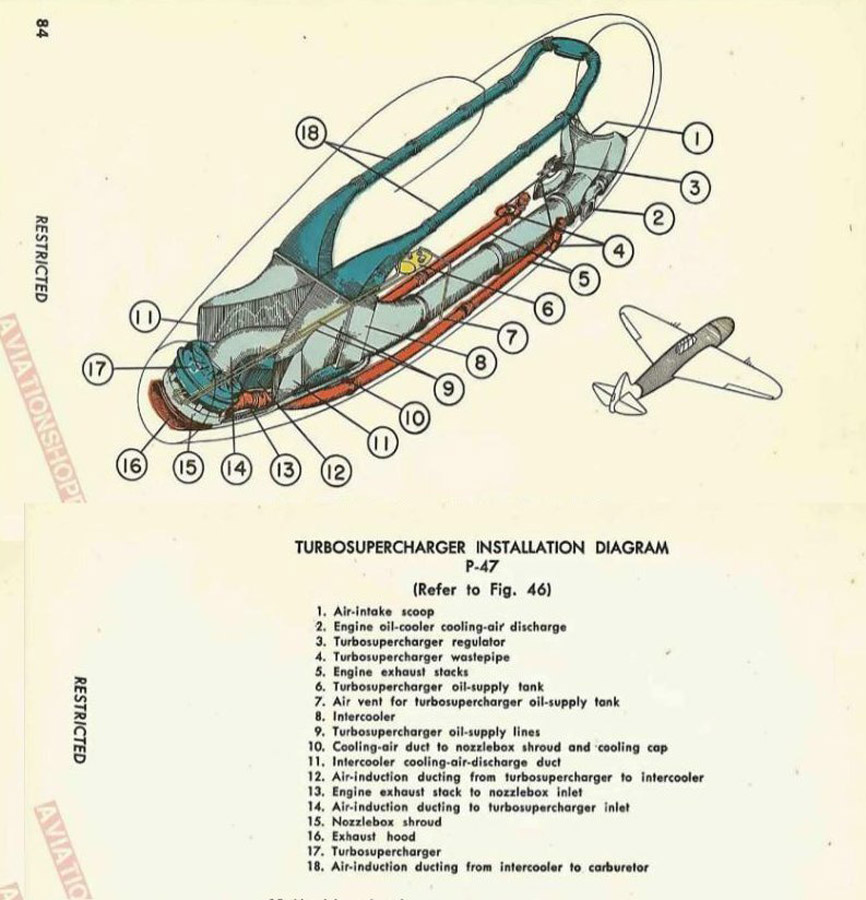 This is a diagram of a P-47 turbosupercharger system from the Turbosupercharger Field Service Manual (General Electric), GEJ-1630, Aug-1945, manual from AviationShoppe.com collection.

It may be  helpful to think of an aircraft turbosupercharger (#17 in diagram) as a big air pump.  It takes in cool intake air (light blue in the diagram), and pressurizes it. That air, now hot from the heat of pressurization (dark blue in the diagram) is pumped through an intercooler (#11) to bring the temperature down, because cooler air is denser. Passing through the intercooler, the hot air is cooled and continues on to the carburetor. When it arrives, it is mixed with fuel, and the mechanical supercharger pushes it into the cylinders of the R-2800 via the intake manifold and intake valves. 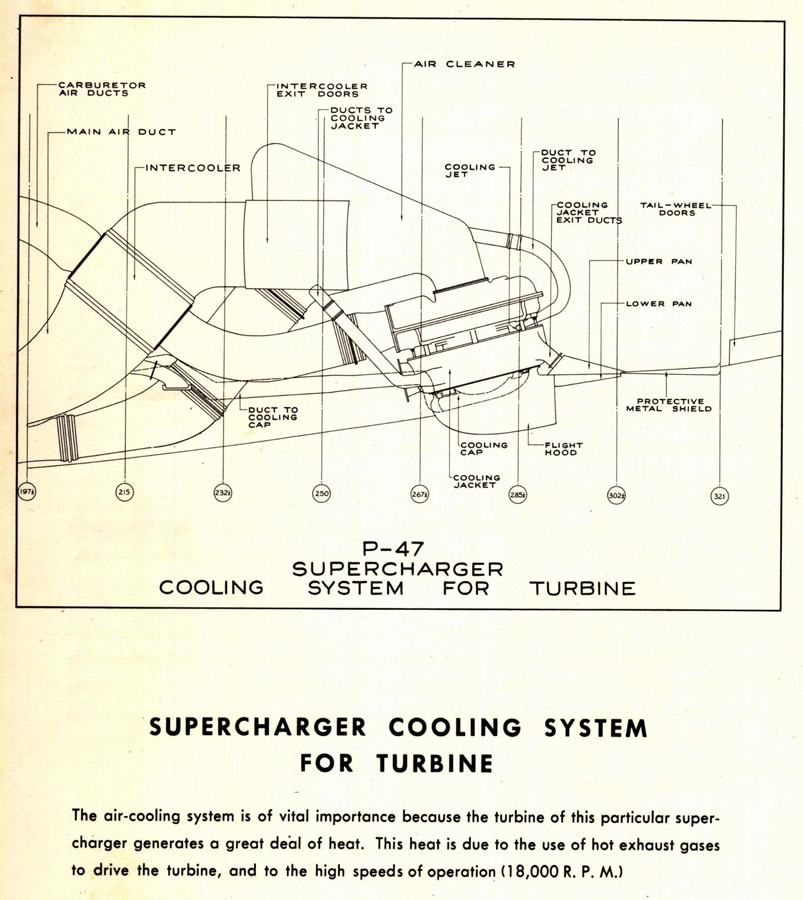 This diagram gives an idea of how the heat from the turbosupercharger was dissipated. Diagram from T.O. EX 00000 manual (Page G26)

The ideal air/fuel mixture for a normally aspirated gasoline internal combustion engine is around 14.7 parts air to 1 part fuel by mass. When an engine is supercharged, it can produce maximum power at a somewhat richer ratio of roughly 12.5-13 to 1. It is critical to always have sufficient air coming into the engine to maintain the correct ratio.

As an airplane climbs, the air becomes much thinner, and as a result, weighs less per unit of volume. The fuel volume also expands somewhat, but to a far lesser degree. At higher altitudes a larger volume of air must be pushed through the engine in order to maintain proper fuel/air ratio. This need for increased air volume is why the use of either a turbocharger or the second stage of a two stage supercharger is needed at altitudes above approximately 15,000 feet.

What Drives the Two Superchargers? 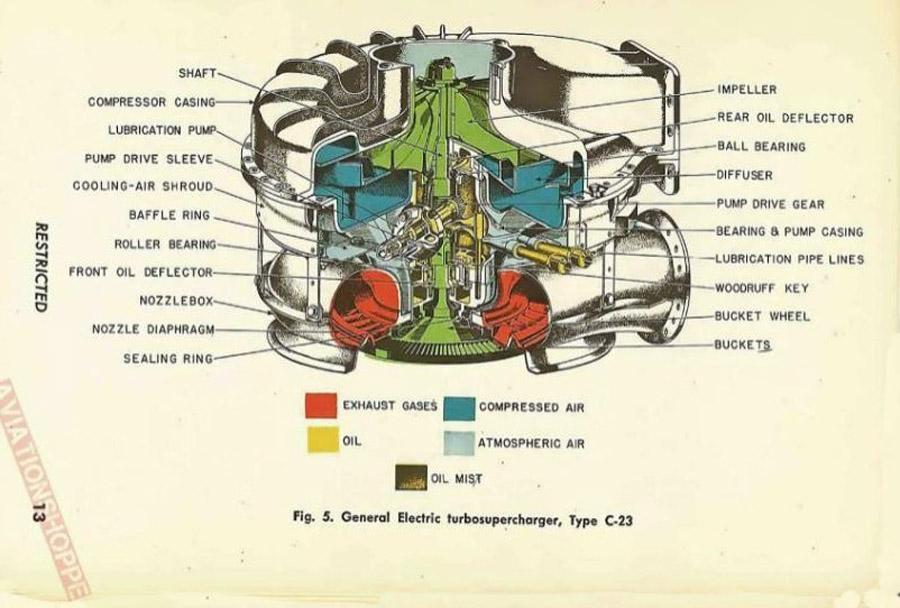 The turbosupercharger is spun by exhaust gasses (red in the diagram) ducted to a “bucket wheel” in the lower half of the C-23 General Electric turbosupercharger. In turn, that bucket wheel turns the impeller. The impeller takes in cool air in the center and by centrifugal force spins it outward, pressurizing and pushing it out through ducting to the intercooler. 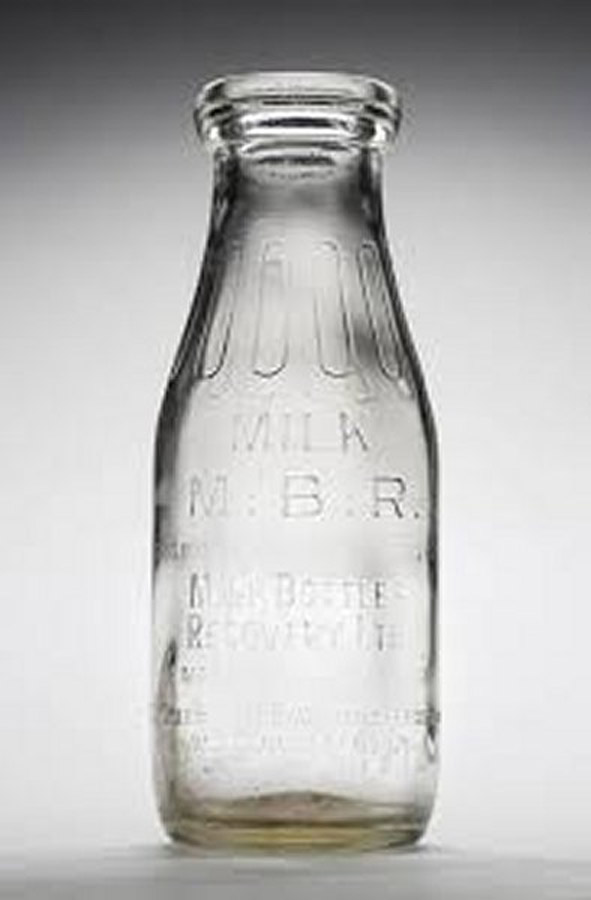 One nickname often heard attached to the P-47 is “Jug”. The origin or the name is frequently disputed and otherwise explained. But one of the more popular origin stories is that the name came from the resemblance between the deep bellied Thunderbolt fuselage and a milk jug of the forties.

The milk bottle shape was part of the many design decisions made by Republic engineers, and was largely dictated by the turbosupercharger system in the P-47 fuselage. The oval cross section fuselage looks bulky because the belly curves from the engine back to the turbosupercharger. It was necessary to design it this way to allow room for the large R-2800 and the ductwork, intercooler, and turbocharger hardware enclosed within the fuselage. 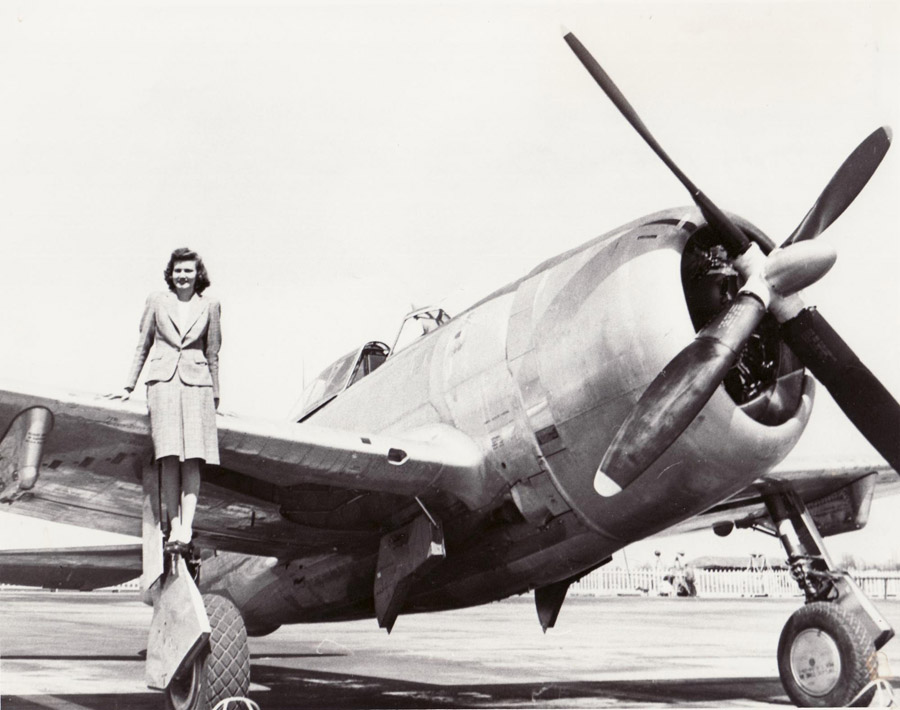 The oval shaped cowl and curved belly are clear in this image. The air intake is the area at the bottom of the cowl. Republic Aviation, Evansville factory courtesy of the Harold Morgan collection

Even the unique ovoid shape of the cowl opening is related to the turbocharger. The main air duct intake opening is located in the lower cowl, so the cowl had to be designed around it. That’s why the P-47 cowl isn’t basically circular like other R-2800 powered fighters. 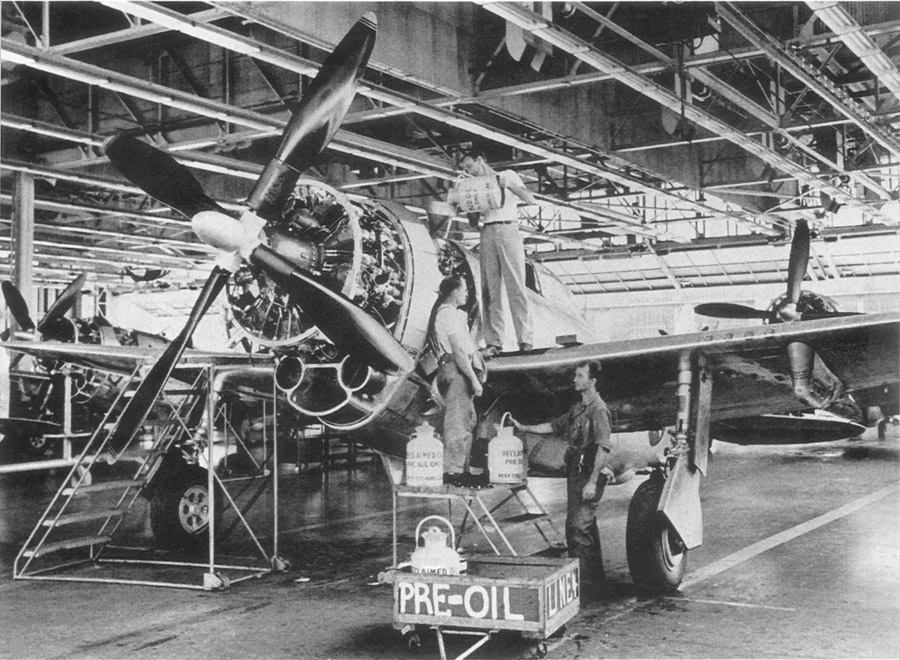 With the cowl off, the three intake ducts are visible. The primary duct (center opening) is somewhat trapezoidal in shape. The smaller circular openings take in air for the left and right oil temperature regulators (oil coolers). Republic Aviation, Evansville factory, courtesy of the Harold Morgan collection