How has the program & its resources helped you?

Immediately I was able to begin drawing out parts in my cad software based on clearly legible measurements on the blueprints. I started by modeling the engine control panel, as it was a simple drawing of a basically two dimensional design. It was also the first thing I printed on my own 3d printer. I picked up a complete RepRap Prusa i3 for $220 on aliexpress. I measured the finished prints against the blueprint/cad model and it is accurate within 0.1mm. I’ve finished modeling the main body of the rudder pedal, added lettering and logo printed a test in PLA, and am currently printing a test in ABS. The next step is modeling the arms that the rudder pedals are suspended from. Right now I split screen between the website and my cad app, transferring value to my design file. Just having such a close look at these design drawings has given me a lot of respect for the people who did this by hand back in the day. 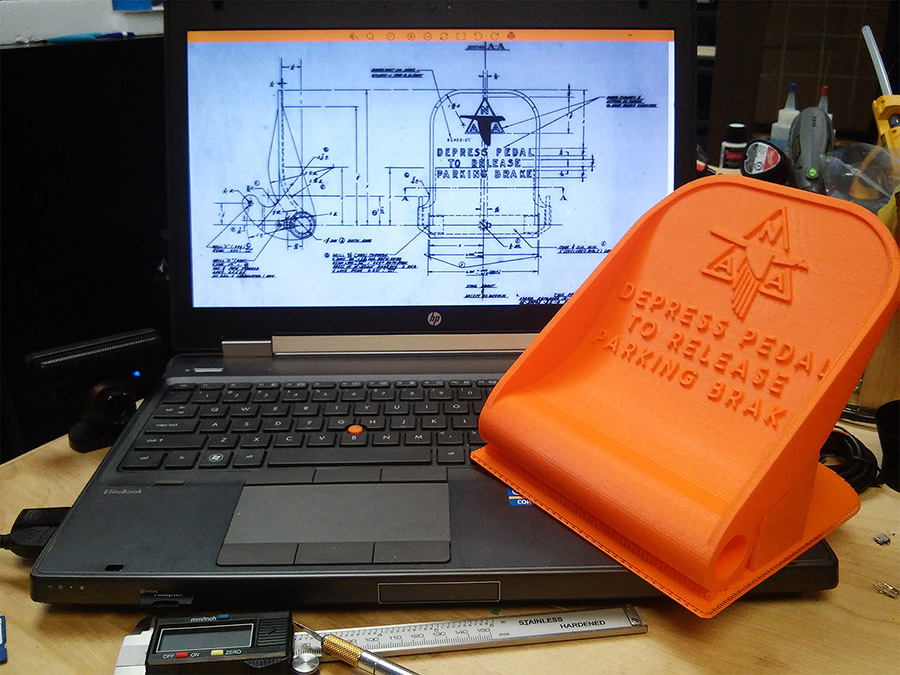 Within the P-51 drawings, being able to search based on keywords like “pedal”, “control panel”, “lever”, etc. has made it a pleasure to browse the collection looking for other possible 3d printing projects.

Having the official sources for every last dimension of my subjects has given me more confidence in my work, and more determination to get things just right. There’s no reason to “guesstimate” any more.

Describe your experience level working with WWII aircraft blueprints and drawings prior to having AirCorps Library at your disposal?

Almost none. I like to look at blueprints as I happen upon them online, but I’ve never had full scale drawings of exactly what I wanted before. I think I got lucky running into www.aircorpslibrary.com when I did. I was feeling like I’d hit a dead end unless I wanted to buy a collection of drawings on DVD.

What would you like the world of enthusiasts, flight simulator, and model guys to know about the program?

As far as sim folks, the cockpit builders are going to benefit from this site the most without a doubt. More than anything, I think they just need to know that it is there! They need to see the quality and ease of use first hand. I’ll be posting my flight control projects on several forums when they are farther along, and will certainly link to my resource for the drawings.

If the aircraft someone is interested is available in this collection and they’re not finding the quality of drawings they need through the normal resources, the subscription price is worth every penny. I was apprehensive about the lack of a “download drawing” button at first, but as someone who’s had a smartphone for less than a year, sometimes I forget we are all online all the time.

What kind of community do you hope to see evolve through a growing base of users?

I’d hope to see anyone (hobbyists, collectors, aircraft owners/restorers, museums, manufacturers, really any who see the value of this project and has resources) begin to make their resources available. There is a good foundation here for something much larger. More than that I look forward to being able to communicate with other users from all backgrounds. A forum or wiki style system for adding resources, sharing photos, stories, building advice, parts/material sources, etc. is the missing piece of the puzzle in my opinion. Allowing users to rate the quality of user generated content would probably be a helpful feature as well.

What interest motivated you to sign up for AirCorps Library?

I’ve been into flight sims since I was a kid in the mid 90’s, playing games like Jetfighter II, and Microprose F-117. The genre seemed like a pretty big part of pc gaming back then. If someone was into pc gaming back then, odds were they had at least one flight sim and joysticks were a common peripheral. Around my high school years, other pursuits took my free time. (read: I should have continued my education instead of partying for a decade) It wasn’t until a few years ago that I saw an article online about an upcoming open beta test for a game then titled “World of Planes” (later renamed to “War Thunder”). It reminded me of the last sim I was into years earlier, the original Il-2 series. I felt nostalgic, and it was a free-to-play game, so I figured I’d try it out. I was impressed with how much the audio/visual experience had improved, and this was the first time I’d flown against human opponents online. I was hooked on wwii dogfights again.

A few years of “fast food air combat” as a friend called it, and I was eager for a more demanding and realistic experience. I was told that Digital Combat Simulator was the obvious choice. It was mainly a modern jet sim, but they’d had a Mustang add on available for a while, and I’d heard of the plans to add several more wwii aircraft and locations in a project known as “DCS: Europe 1944”. The Spitfire has always been my favorite wwii fighter but that wasn’t available yet. After test flying and being very impressed with the civilian Mustang that is available free of charge, I purchased the P-51D module.

When I was a kid I remember getting a Thrustmaster FCS for my birthday and being blown away by how much a realistic control stick improved the whole flight experience over my old two button stick. I’d always wanted a throttle and pedals to go with it, but that gear was a little out of my price range. I remember trying out a microsoft sidewinder force feedback in a game shop. These ones simulate control loading, and the effects are great for prop fighters. I picked one up at a thrift shop a few years ago when I was getting back into flight sims, but the force feedback effects in war thunder were pretty lackluster. In DCS on the other hand, this thing was amazing. The load changes in relation to speed, you can feel high AoA buffeting before you can see it, and the stick moves by itself when you adjust your trim. The immersion was just terrific. I still didn’t have a throttle or pedals though.

About six months ago while working at a pc repair shop, I found a job listing on craigslist that mentioned soldering electronics and 3d printing. They hired me to build infrared lamps and modify digital cameras, but I took the job mainly to get access to 3d printers. I immediately thought of the applications these things could have for custom flight sim gear. Years ago, flightsims were a big genre and their were a large variety of good peripherals to choose from. These days there are a lot less of each. My first 3d printing project was just a rough joystick grip and some random knobs. Something to explore what these machines might be capable of. After that I began designing infrared head tracking devices for looking around in game. The next was a fully 3d printed throttle quadrant prototype powered by Arduino (more specifically, Teensy LC). Something to take home and use with DCS. That worked out better than expected, but I didn’t really want to design a generic controller. Now it was just a matter of deciding what flight controls I wanted to model. The Mustang was the obvious choice. I felt good about investing the time and effort since the quality was there to match on the software side of things. Every last switch, knob and lever is functional in the cockpit. I’d already modified my sidewinder to a realistic control stick length, but now I needed an accurate throttle, grip, and rudder pedals.

How has our customer service and responsiveness been?

I’m not sure if Eric handles all customer service the site, but he’s been very helpful and responsive to my ideas and few bug notifications. I have seen a few of my ideas implemented, and the only bugs I’ve found have already been fixed. Some things were fixed in a matter of days. As a total amateur to aircraft, blueprints and cad, I never felt like I was being spoken down to. That has happened from time to time when contacting professionals in the past.