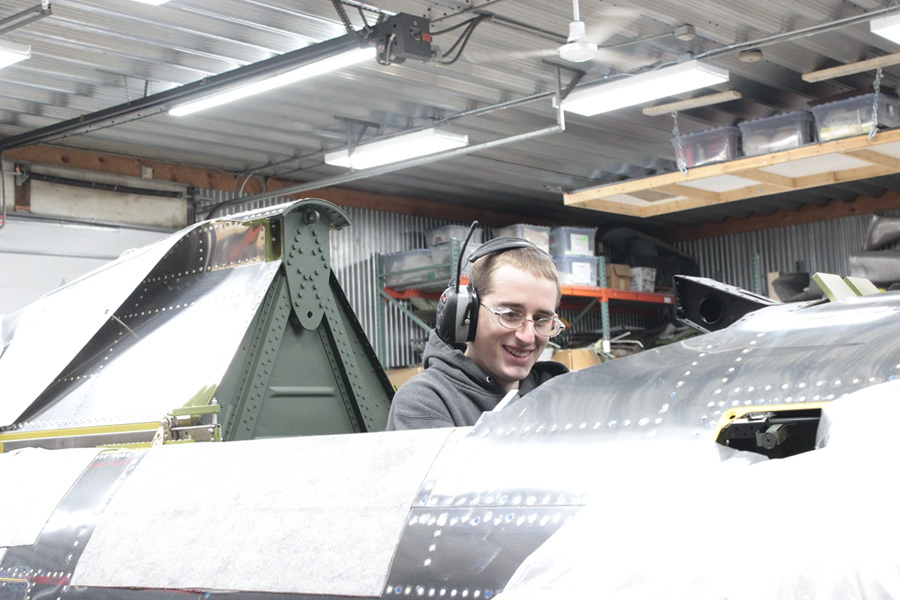 Aaron works at system installation in the P-47 cockpit.

Wing work and fuselage systems installation again took center stage in the restoration effort this month. Much of the fitting of wing parts has been completed and in the coming weeks, the wing will be broken down for internal painting, final riveting, and assembly.

Work on installing various systems in the fuselage continues. A few of the areas worked on in the fuselage were hydraulic lines, tail wheel lock system, and the fuel selector.

As wing assembly continues, parts are still being fabricated. Fitting various reinforcement plates related to the gun installation was part of this month’s restoration progress. Skin fitting for the leading edge has also been started.

This month I thought it might be interesting to include some pages from an aerial combat tactics manual published by the Fifth Air Force in August of 1945. Margo Prudente, Major Bill Dunham’s daughter, generously allowed us to scan this official Army Air Force manual.

The portion of the manual written by Colonel Edwin Doss, Commander of the 35th Fighter Group is reproduced here.

The 35th Fighter Group was the only Fifth Air Force group flying P-47D-23s in combat before very late August/early September according to what is legible in the 5th Air Force squadron history records.

This booklet has been republished (ISBN-10: 1576380645) and also appears to have been used as a source for both Tony Holmes’ Twelve to One’ V Fighter Command Aces of the Pacific1 and in the book Fighter Combat Tactics in the Southwest Pacific Area by Ray Merriam2.