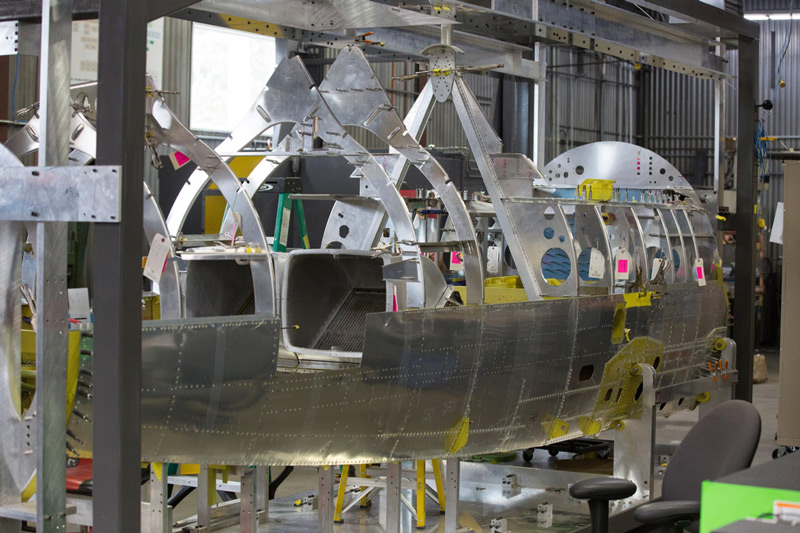 The rectangular notch in the skin on the fuselage side in this image is the hole for the exit door that controls the intercooler cooling airflow.

Our P-47 restoration continued in late July and early August despite the busy times surrounding AirVenture in Oshkosh, WI. While some of the AirCorps folks were in Oshkosh displaying Lope’s Hope 3rd, others were hard at it on the P-47. The progress on the upper fuselage was remarkable to see after being away for a couple weeks.

To clear up any confusion about the logo change on our updates and correct some speculation, Texas Flying Legends Museum (TFLM) in Houston and the Dakota Territory Air Museum (DTAM ) in Minot, ND, have been sister museums since TFLM was established in 2010. DTAM was established in 1987. Both museums have shared in the operation and display of the TFLM collection for eight years. Both museums have also shared two major donors, one of whom has decided to step back from the warbird industry to contribute to another foundation.

A few of the warbirds have been, or are being, sold. The remainder of the collection, nine airworthy aircraft,will continue to be maintained, operated, and displayed by DTAM in Minot, ND. These planes include a Normandy invasion veteran Spitfire Mk IX, P40E, FM-2 Wildcat, C-47/C-53 Skytrooper “Duchess of Dakota”, Harvard Mk IV, P-51C “Lope’s Hope 3rd”, P-51D “Little Horse”, Iwo Jima veteran Stinson L-5 Sentinel and an F8F Bearcat recently emerging from restoration by Ezell Aviation in Breckenridge, TX. www.ezellaviation.com

The museums have always had a commitment to not only campaign flying warbirds, but also to bring them back to life. To this end, they have a long standing, close working relationship with AirCorps Aviation based in Bemidji, MN. AirCorps has completed two award-winning projects for DTAM so far – the Harvard and the P-51C “Lope’s Hope 3rd”.

DTAM currently has two other projects in progress with AirCorps, this P-47D Razorback and a P-38, both Pacific theater veterans. They also have a Hurricane being finished up next year by Ray Middleton in Fort Collins, CO and a P-51D Mustang expected to fly next year after restoration by Casey Odegaard in Kindred, ND.

For eight years these owners, pilots, and crew have given us the gift of displaying their aircraft throughout the U.S. They have tirelessly moved aircraft and engaged enthusiasts, honored veterans from all service branches, and flown for both President George H.W. Bush and the Air Force Academy. Most importantly, they have honored our greatest generation while inspiring our future generations.

DTAM will be updating its website later this winter so you can come back and check the site for more information at that time: www.dakotaterritoryairmuseum.com. Thanks for your continued interest.

This month, considerable work was done inside the fuselage frame. On a P-47, the spaces aren’t that closed in compared to other warbirds like Mustangs, Spitfires, or Warhawks.

The sharply ridged turtleback is the reason the early P-47s were called razorbacks.  As that structure takes form, our Thunderbolt establishes its identity as a D-23, the last of the razorbacks.