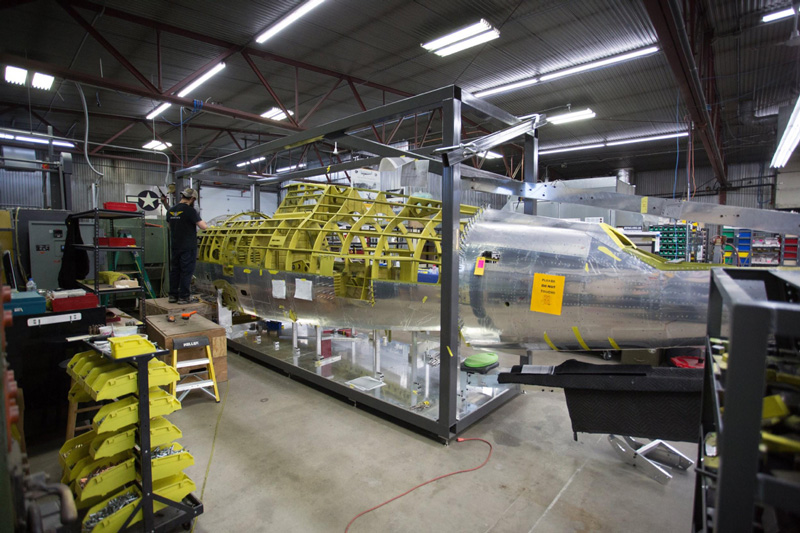 With the tail cone attached, the fuselage is 7 feet 2 inches longer!

A milestone was reached this month as the tail cone was fitted to the forward fuselage. Other areas of focus were the tailwheel assembly and cockpit enclosure.  As skin sections undergo final fitting, clecoes are replaced with permanent rivets. Other new skin sections go through the fitting process, with hundreds of clecoes holding them in place.

Work always continues away from the main fuselage fixture. This makes sure that parts and assemblies flow smoothly to the P-47, when they are called for in the assembly sequence.

The distinctive “greenhouse’ cockpit enclosure of the razorback Thunderbolts is a challenging structure to restore. Like many assemblies in this restoration, new parts were made using originals for patterns.  In this case the original’s value as patterns was incalculable. New old stock parts were also used when they were available. On the cockpit enclosure, the window emergency release hardware is new old stock. 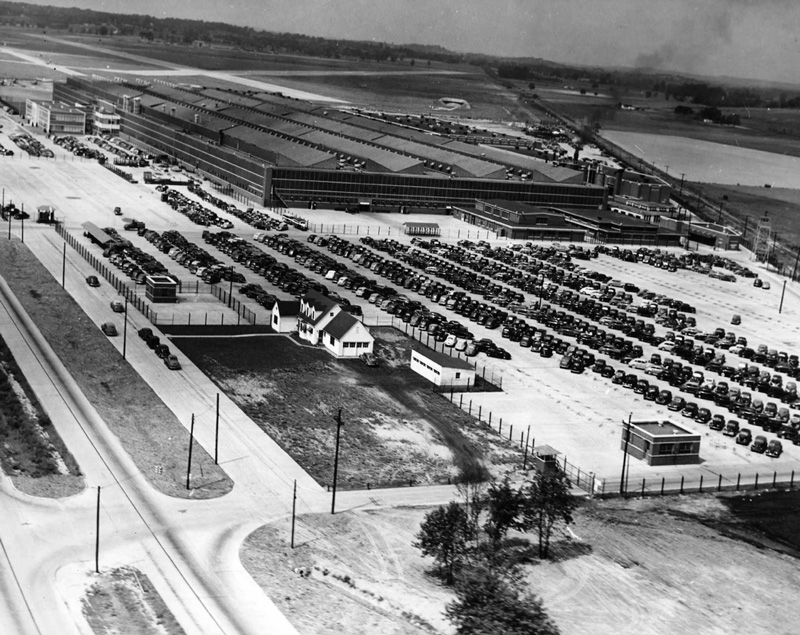 Last month, I detailed the early history of the Thunderbolt through the prototype’s first flights. This time we will look at the production of the P-47 from the earliest versions through the end of the D model series.

The first production versions were the P-47B models. 171 were built and most ended up being modified.  You may recall that that the XP-47A was a completely different, lightweight airframe, so that is why the first production Thunderbolts carried the “B” designation.

The P-47C introduced shackles that allowed a bomb or belly tank to be attached on the fuselage centerline.  C models were also the first equipped with cockpit heating. Beginning with the P-47C-1-RE, the fuselage was extended by 8 inches, forward of the firewall.  The change was done to improve handling through relocation of the center of gravity. The “C” models sent to the European Theater of Operations were the first to see combat in any numbers.

The “D” series P-47 was the most produced.  Unlike the North American P-51, the change from “C” to “D” did not happen concurrently with the switch to a bubble canopy. The P-47D through P-47D-23-RA were all razorbacks .  The bubble canopy was first used in production models on the P-47D-25-RE and continued through all subsequent models with the last of those being the P-47N-25-RE.

Republic had two factories producing the P-47.  Additionally, Curtis built 354 P-47Gs on license. The first Curtiss versions, the P-47G-CU and P-47G-1-CU were comparable to the P-47Cs built by Republic, while the P-47G-5-CU through P-47G-15-CUs were comparable to “D” models.   The Curtiss built P-47Gs were used stateside, primarily in a training role. 1 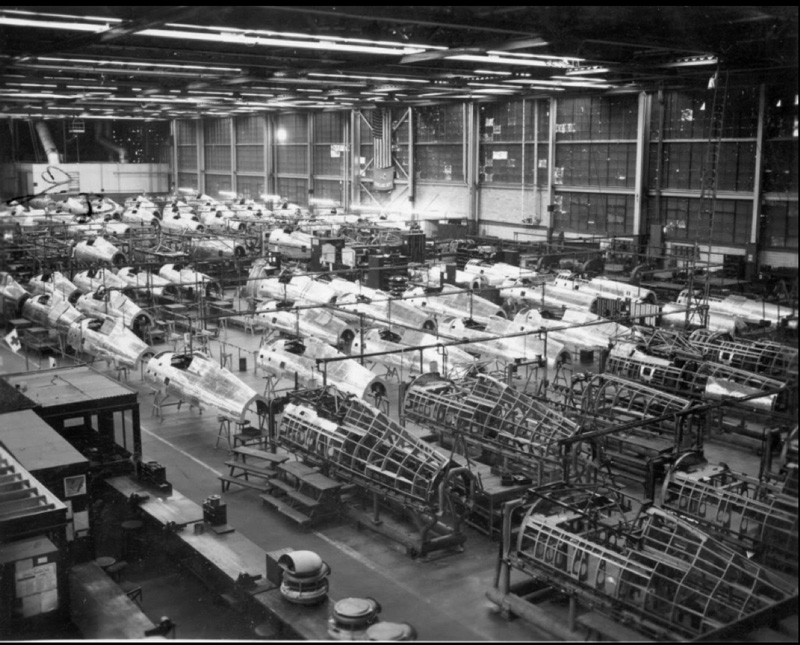 In almost all cases the RE suffix meant that the P-47 was built at the Farmingdale factory and the RA suffix indicated an Evansville, Indiana built airframe.  The exception to that is the first two Evansville P-47 production blocks. The plan had been to use the “D”model designation only for Evansville Thunderbolts. But with the introduction of manufacturer’s identification letters, the first P-47s built at Evansville were P-47Ds with no letter suffix, the next 110 Evansville Thunderbolts were designated P-47D-RE.2

Subsequent to those first 114 Evansville produced P-47s, the naming system was standardized to designate P-47s from both Republic factories as “D” models with a manufacturers letters of RE for Farmingdale and RA for Evansville produced Thunderbolts. 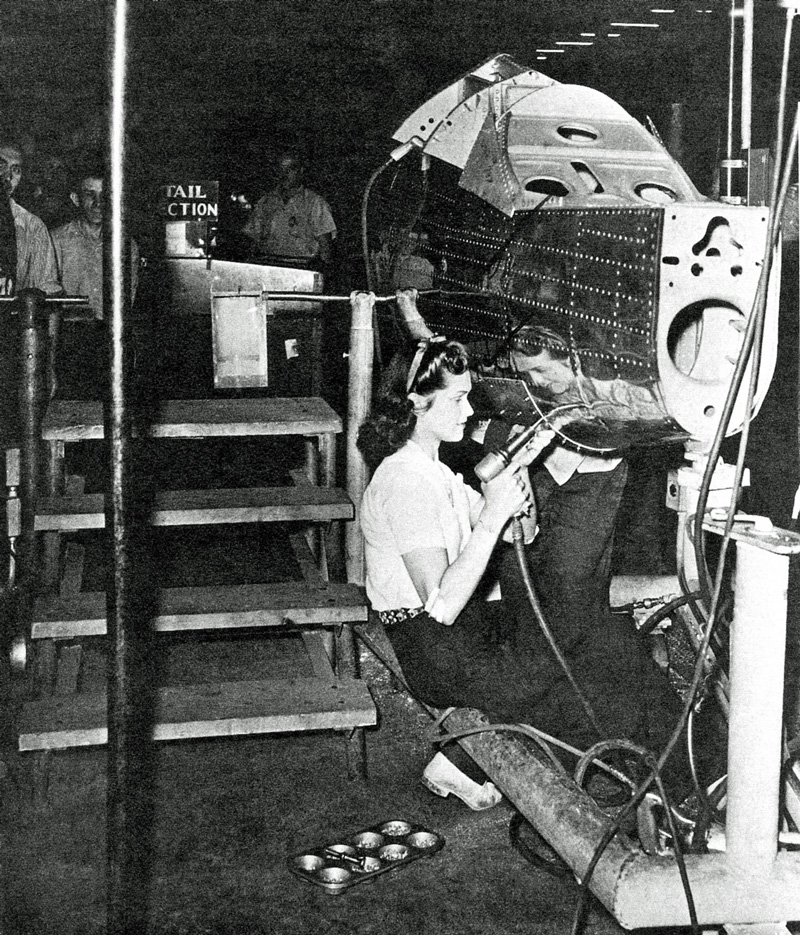 “Rosie the Riveter” worked at Evansville among hundreds of other wartime factories. Photo courtesy of Harold Morgan collection 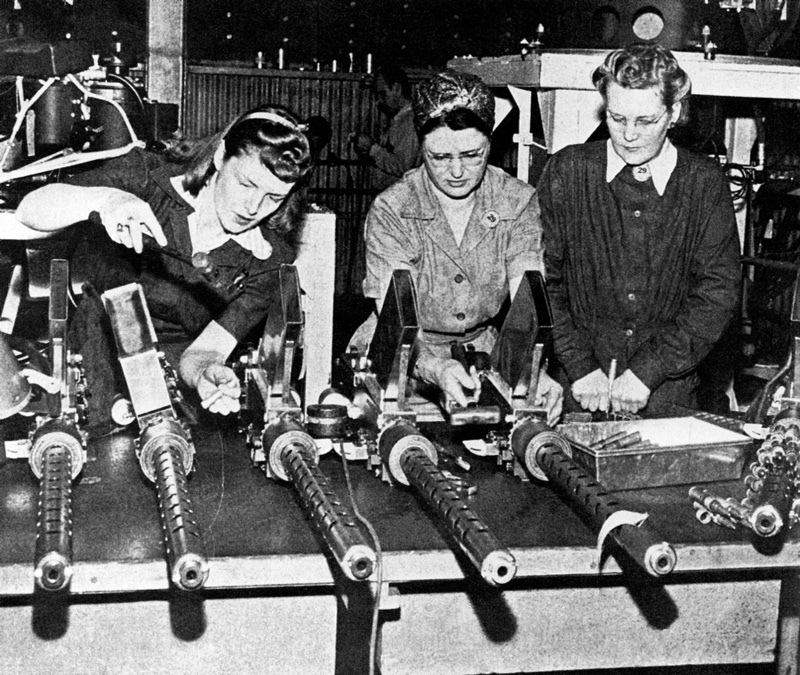