**Updated 2/1/17 – Upon thorough inspection of the recovered wing panel containing Eva & Edith’s signatures we’ve determined the wing was built by the Curtiss-Wright Company in Buffalo, NY.

The body (fuselage) and many of the components of the P-47D aircraft being restored by AirCorps Aviation were produced in Evansville. We will continue to capture the remarkable stories of the men and women who worked on the original aircraft (S/N: 42-27609), and at the locations providing components, until it left the factory in March 1944.**

The Restoration team is focusing heavily on the P-47 Thunderbolt project in January. To help tell the stories behind the planes, hundreds, or even thousands, of photos are taken of individual parts, process steps, and the progress that occurs while they live at AirCorps. Clicking through them is always interesting, but there’s one in the Thunderbolt folder that immediately captures attention. This photo begs the questions: Who are Eva & Edith? Can we find them? 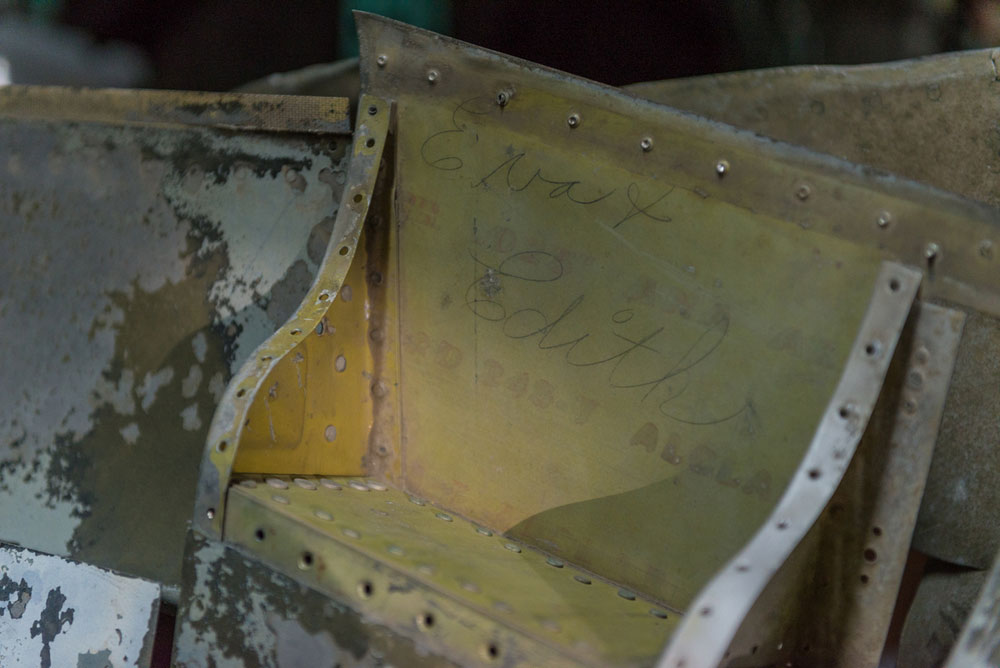 To begin answering those questions, we look to the plane for more clues. This Thunderbolt was completed in 1944 and is identified as P-47D-23RA with the “RA” indicating it was produced in Republic Aviation’s Evansville, Indiana factory. The U.S. Army Air Forces assigned the two-letter manufacturer site codes; just one more detail accounted for in the unprecedented effort to build more than 300,000 military aircraft in a 6-year span. Bill Yenne’s “The American Aircraft Factory in WWII” is a terrific resource for learning more about how the U.S. organized a way to soundly obliterate every previous plane production record.

Profile of P-47D-23A as it would have looked rolling out of the factory (photo: Bertrand Brown)

Evansville during war time was bustling with a workforce that had quickly grown by 66,000 people1. The city that was home to Republic’s latest factory also included a newly built shipyard producing LSTs (tank landing ships) and a Chrysler plant re-purposed to make .45-caliber automatic ammunition, as well as other local businesses working to meet demand for military supplies. The movement of women into positions necessary to accomplish such a feat during those years is well-documented and Evansville certainly mirrored the rest of the country in this regard. In fact, roughly half of Republic Aviation’s 5,000 workers were women2 so imagining Eva & Edith working side by side on a production line is quite logical.

Notes, signatures, and measurements were often written on the inner surfaces of aircraft during manufacture, sometimes for convenience and sometimes for posterity. Chuck Cravens discusses how AirCorps preserved more of these types of markings found within Sierra Sue II in his book “Combat Vet P-51.” Could these two ladies have possibly fathomed that 72 years after becoming part of the “army at home” their signatures inside a P-47 would still exist as evidence of their contributions?

Those who know AirCorps Aviation’s history of results are aware that every effort will be made to remove any speculation from the answers to these questions. While the design, engineering, and sheer power of the fighters in the shop warrant reverence, it is truly the tales of the people who surrounded them, in service to country, that make them shine a bit brighter. 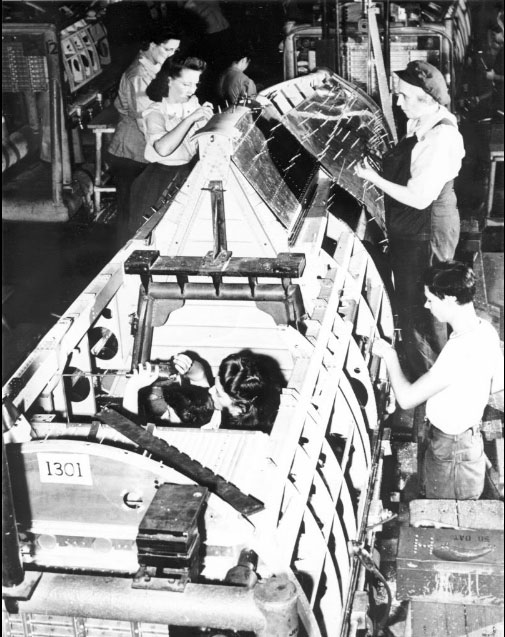 Work in progress on a razorback-style P-47 (photo: Republic Aviation)

Look forward to updates on additional research and news on the search for Eva & Edith. Have a resource you think will help? Contact us!