The P-47 project is starting to pick up as we start to tear down and inspect assemblies that we have. We have also begun making the parts that we have completed CAD models for and know are missing.

We are working with Mike Breshears of Vintage Airframes/Allied Fighters to make some parts he needs but doesn’t have the capability to make. He needs them in the short term and we need them in the long term. Examples are the leading edges  and some belly skins.

We have pulled all hydraulic components and landing gear. Disassembly and inspection of these components has begun to determine what is good and what will need replacement.  P-47 components can be difficult to find, so we wanted to know what is needed sooner rather than later.

Another component we have been sorting through is the propeller.  The P-47D-23 uses the Curtiss four blade steel SPA-3 Paddle Blades.  These blades are hard to find and we fortunately have one set of those and 2 sets of the standard Steel Blades.  We will continue to look for the missing parts to get at least one prop assembly complete and ready to go.

The stabilizer has been disassembled, inspected and the usable frame members are ready for reassembly.  Once the spars and usable parts are assembled, fitting of new parts like ribs and skins will begin.  It was a big time savings to find the extruded spar caps are in perfect condition as these would  be considerably expensive  to manufacture.

Work continues on the CAD drawings of fuselage and wing components, this will be vital to production of those parts in the upcoming months.  We, of course, have added the scanner to our equipment list and it has already helped in establishing the models and contours necessary to fabricate the needed  parts.  We have also used the scanner to verify the Horizontal and Vertical fixtures that came from Mike Breshears as part of the Allied Fighters P-47 parts purchase.  We were very happy to learn that the fixtures were very straight and only required minor adjustment, it also verified that our drawings of the horizontal and vertical are correct. 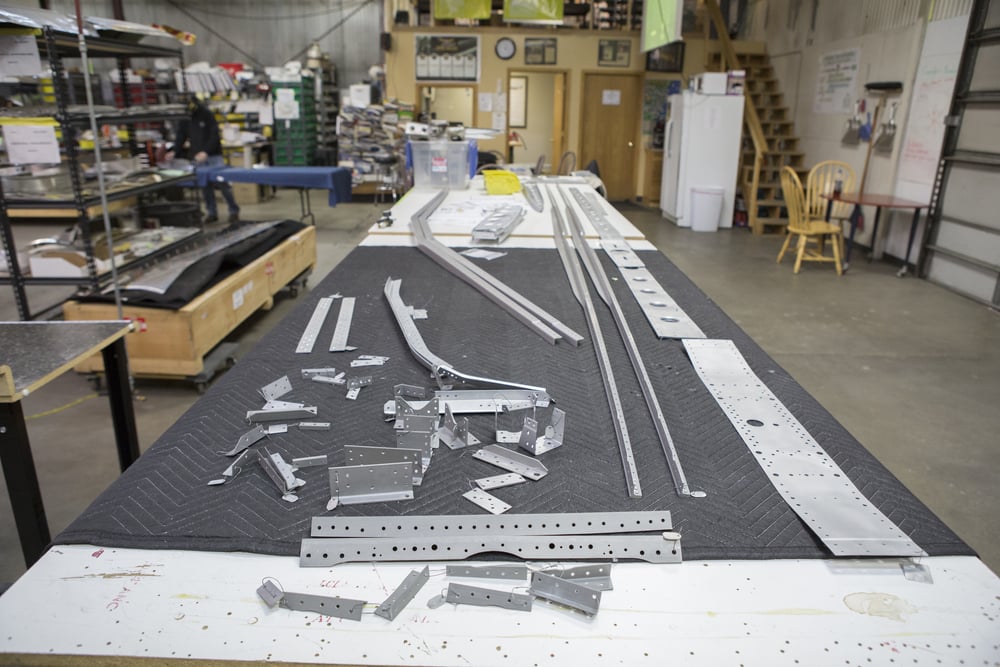 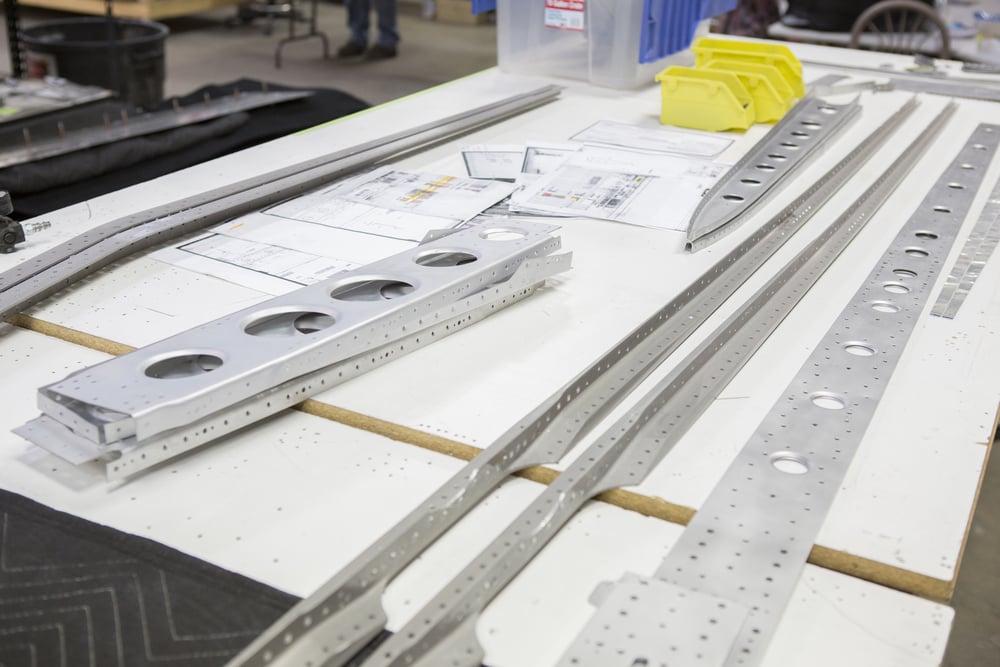 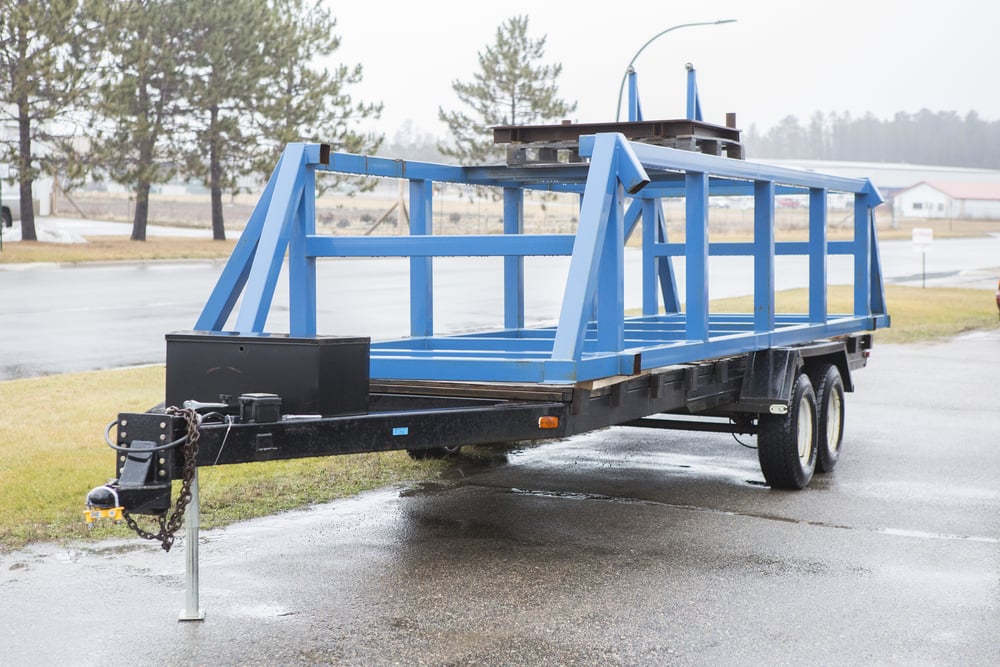 Fuselage fixture from storage in Minot back in Bemidji.

The fixture from Mike Breshears was picked up in Minot and I can’t wait to see the fuselage take shape in it later on.

There has also been a great deal of scanning and cad work done to produce skin sections.

Another use for the scanning system is to ensure that the horizontal and vertical stabilizer fixtures and their attachment points are straight and true. 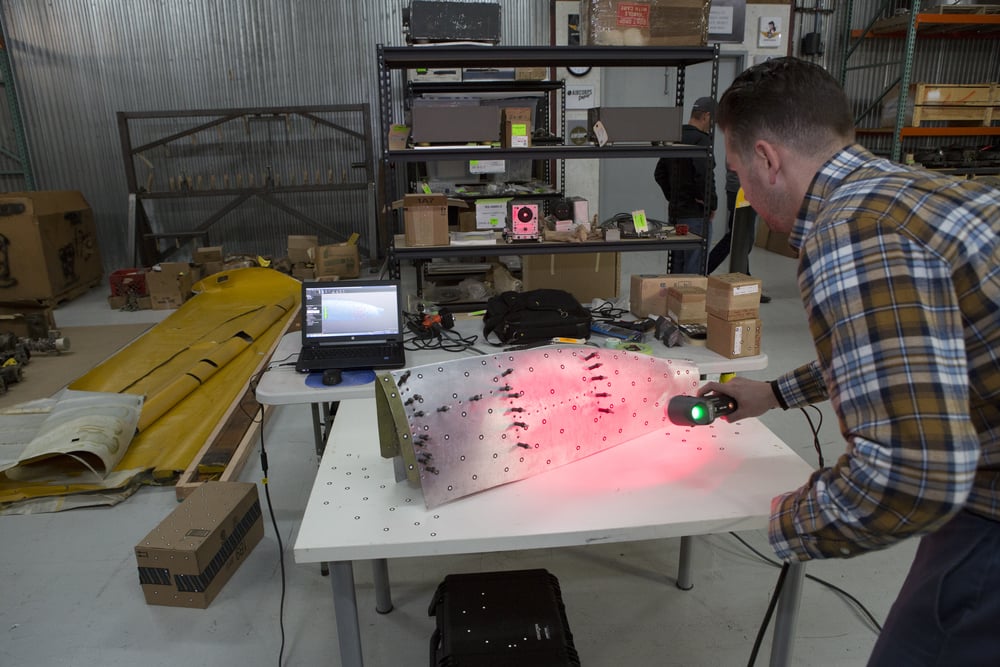 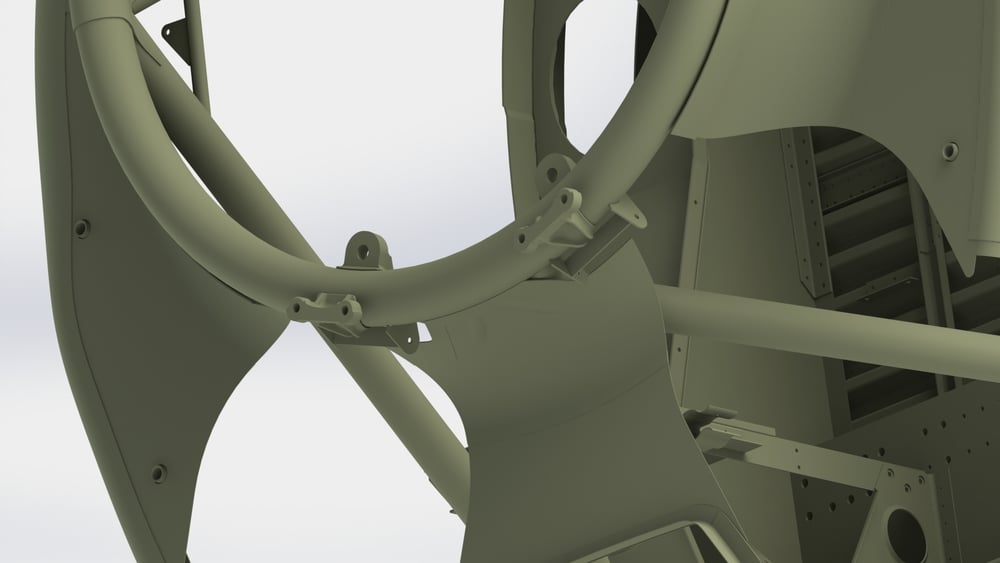 CAD work on the engine mount 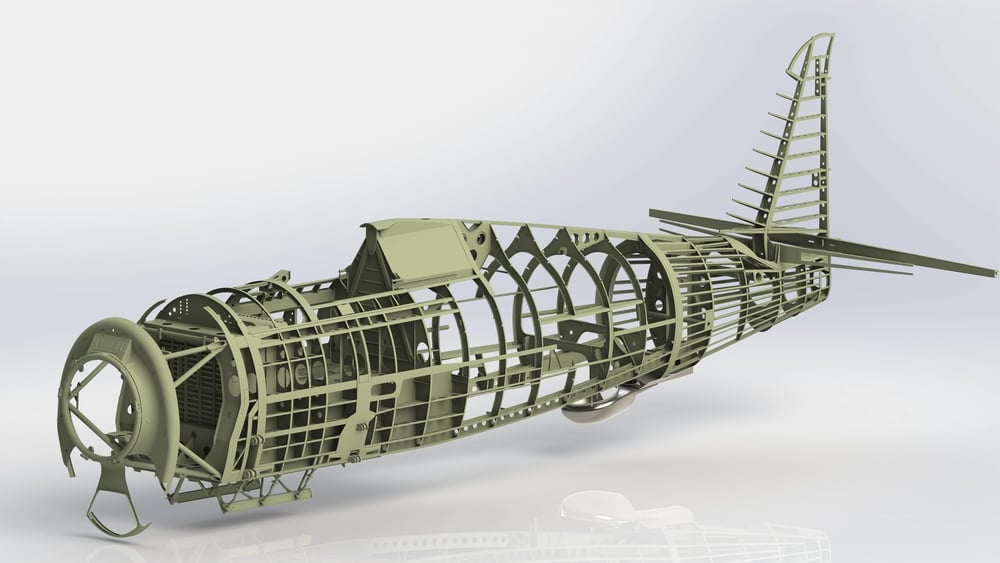 Cad drawing of fuselage structural members. Rob McCune is a big contributor to the whole process with his 3D work.

Cad drawing of fuselage structural members. Rob McCune is a big contributor to the whole process with his 3D work.

From the drawings the process progresses to machining the forming blocks from tooling plastic.  We also received a belly form from Mike Breshears.  He needed the skin section so we made one for him and also 2 for the P-47 project and one spare. 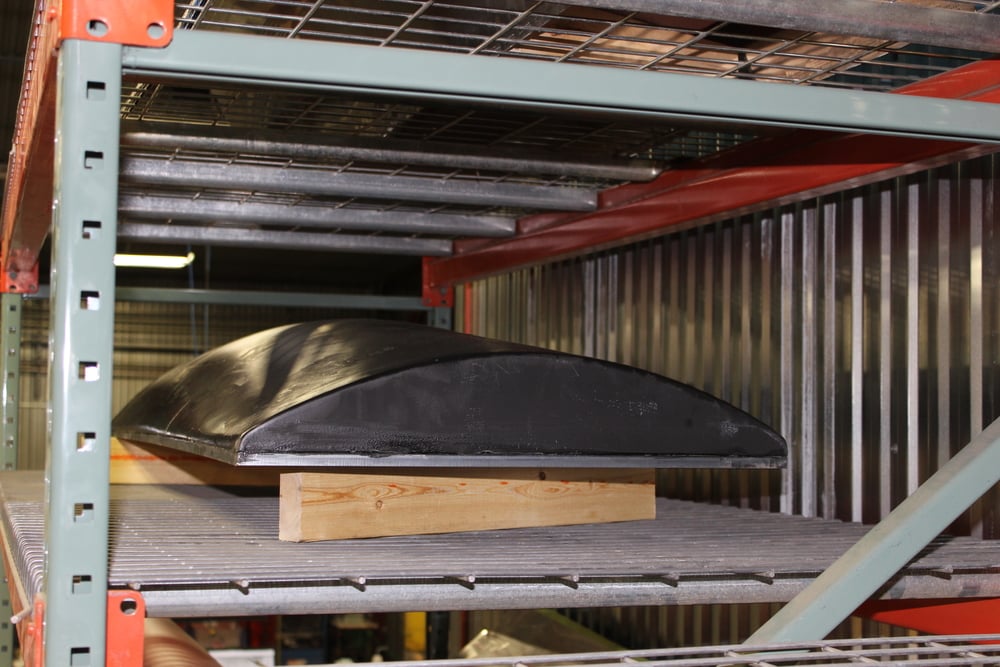 Rob McCune, our draftsman, also discovered some information about the strange tank placed just behind the cockpit in the top of the razorback area. General George Kenney of the 5th Air Force didn’t like how short the combat radius of the P-47 was, so he had his engineering staff devise a couple different methods to extend the range. One was a 200 gallon drop tank designed and built by Ford of Australia. Another was this added triangular tank behind the cockpit.  The tank required cutting a hole in the side and it was only test fitted to a few  P-47’s. It ended up giving the plane balance problems because it was too high up in the fuselage and it wasn’t self sealing so it became a fire hazard. It was quickly discarded and never used on a large scale. Turns out ours was one of the test models. 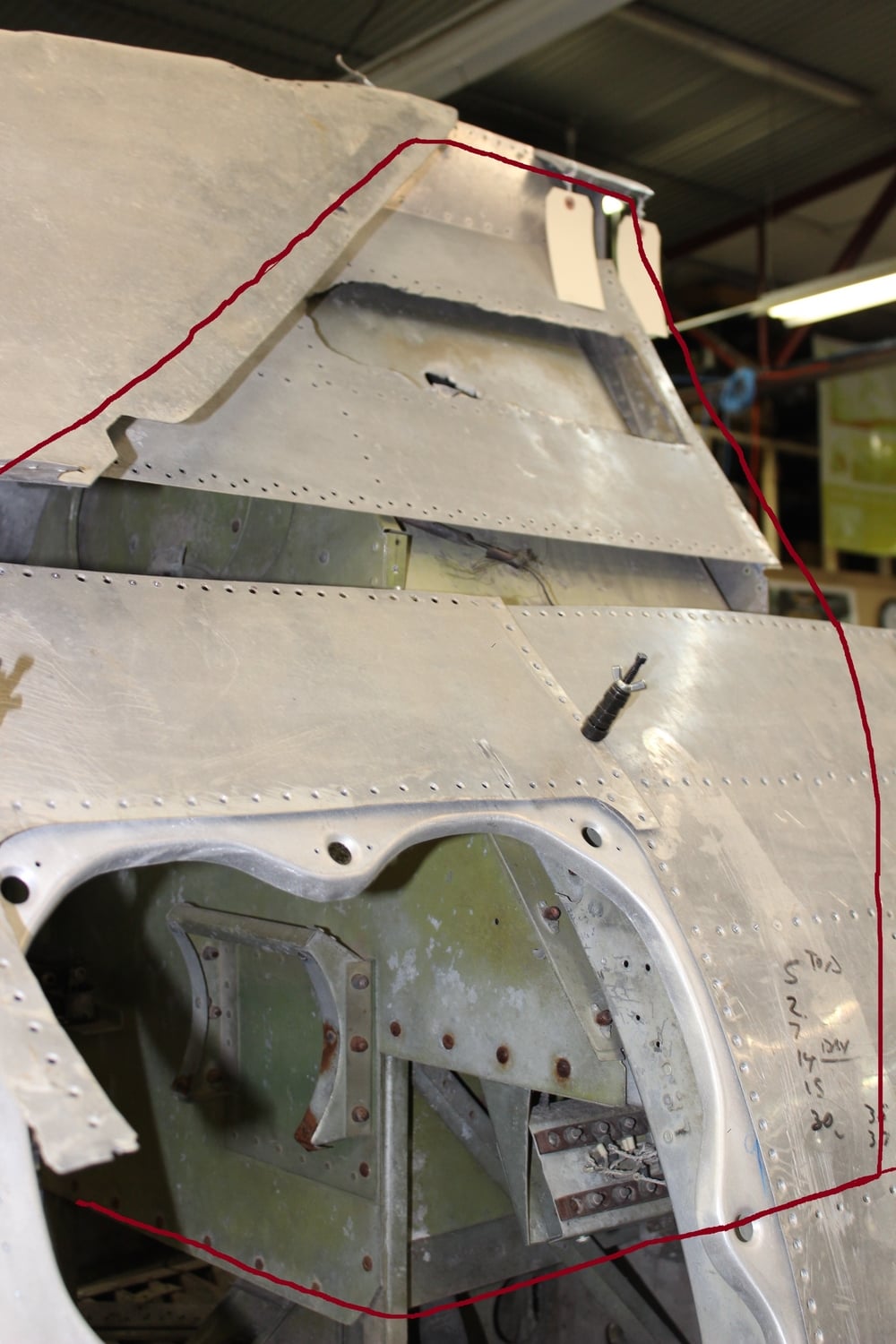 Because only a few P-47s were equipped with the tank to test, it is kind of unique.  At some point we will have to decide whether or not to incorporate it in the restoration.

Once the form has been produced aluminum skin can be stretched over it to make skin parts with complex compound curve shapes. 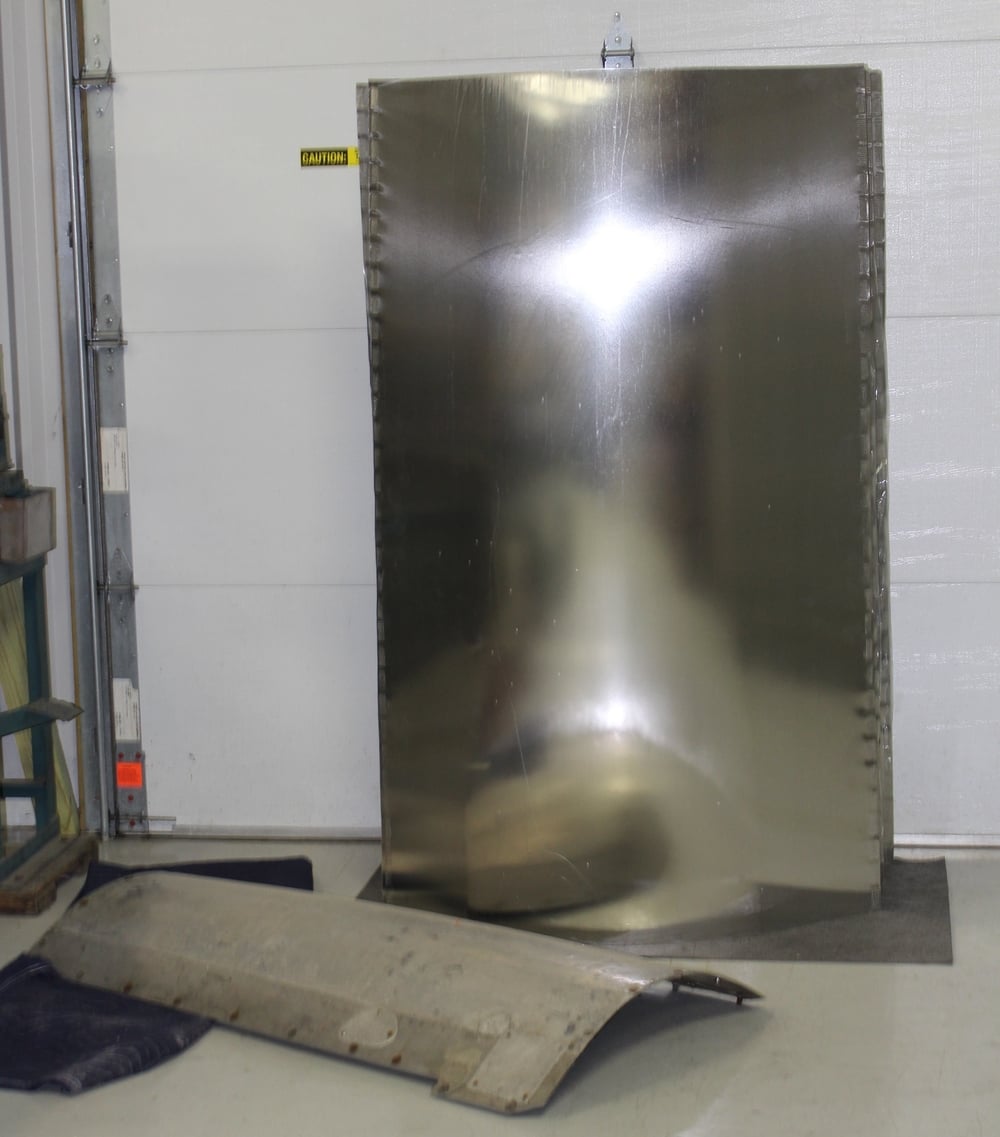 The 35th Fighter Group added a mast to the vertical stabilizer to lift their antenna up a foot for better radio reception.  They  were in Morotai, Dutch East Indies by September of 1944.  There is no evidence of an added mast on our original fin and it is unlikely that a war weary P-47 would be flown over 1000 miles from Morotai to Dobodura to be written off.  That eliminates the 35th with reasonable certainty.

The 318th also had P-47s but were flown off carriers directly to Saipan in June of 1944.  So they were far enough away to rule them out as well.

That leaves the following Fighter Group and Squadron possibilities:

The 460th is pretty unlikely because of the date they began operations.  All of the serial numbers from 42-27608 through 42-27637 that I can track down went to either the 58Th FG or the 348th FG , so that adds credence to the conclusions.

If anyone has photographs of 42-27609 while she was in service, we would love to hear from you. They would have to be shots that haven’t been online since and exhaustive search has been conducted.  If you or a family member served in one of the squadrons listed and you have a picture that shows 427609 on the fin, please contact me at chuckc@aircorpsaviation.com.  We’d happily pay for the photo or for reproduction costs.  It would be great to return this Thunderbolt to accurate wartime colors.