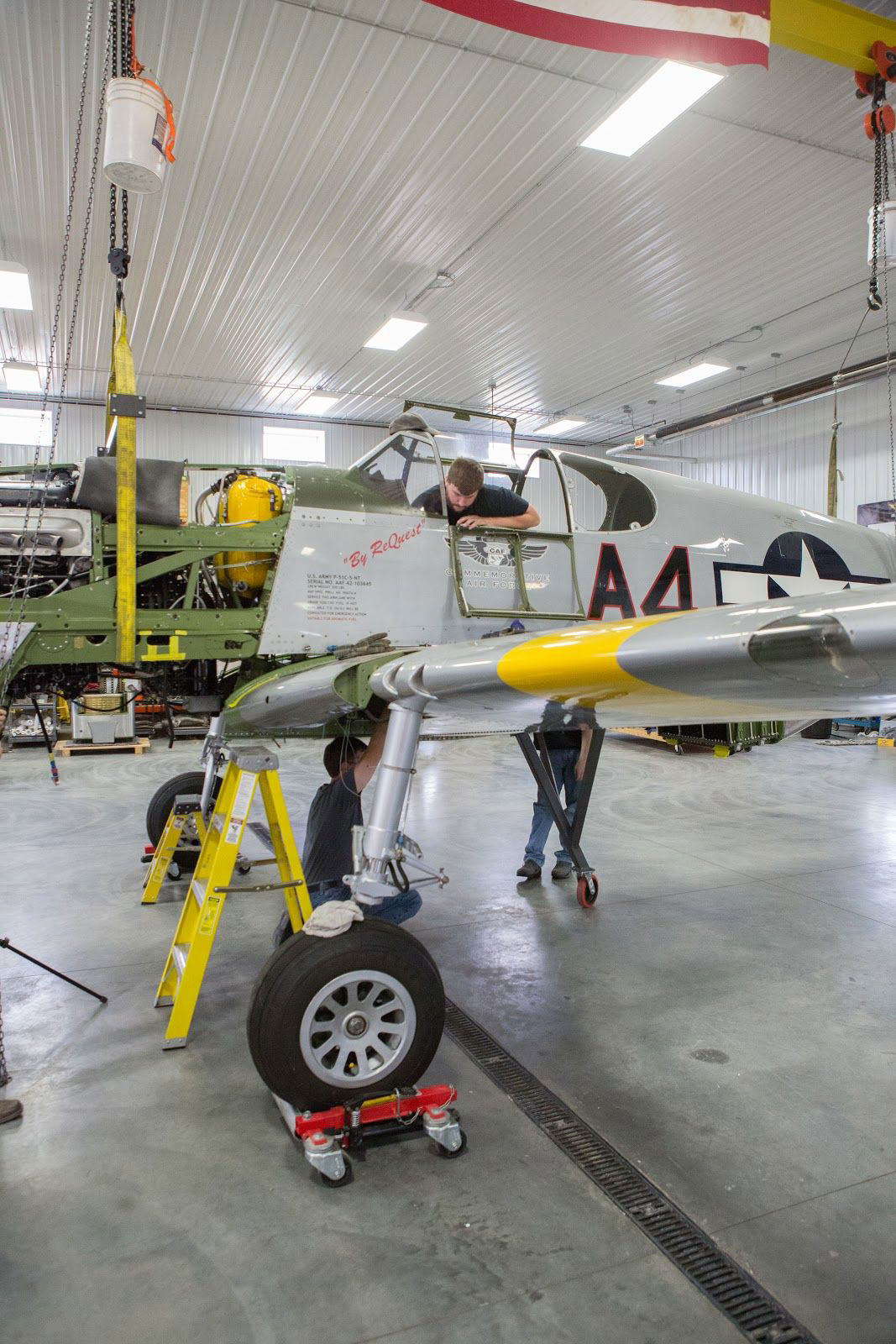 One more wing assembly photo: Tye and Mark install one of the four large bolts that attach the wing to the fuselage.

The milestone events of last month (moving out to the hangar, receiving the wing from Odegaard Wings and assembling the wing and fuselage) call for follow up in this month’s update. We will look into the details of the various systems that must be connected.

The wing center section and fuselage systems, the landing gear and gear wells, the cockpit, and some more air intake system work are all part of this update.

After the wing is attached to the fuselage, a great deal of hydraulic, oil, and coolant plumbing comes next. With the radiator and oil cooler under the belly back near the trailing edge of the wing, a Mustang has some pretty long coolant and oil lines. 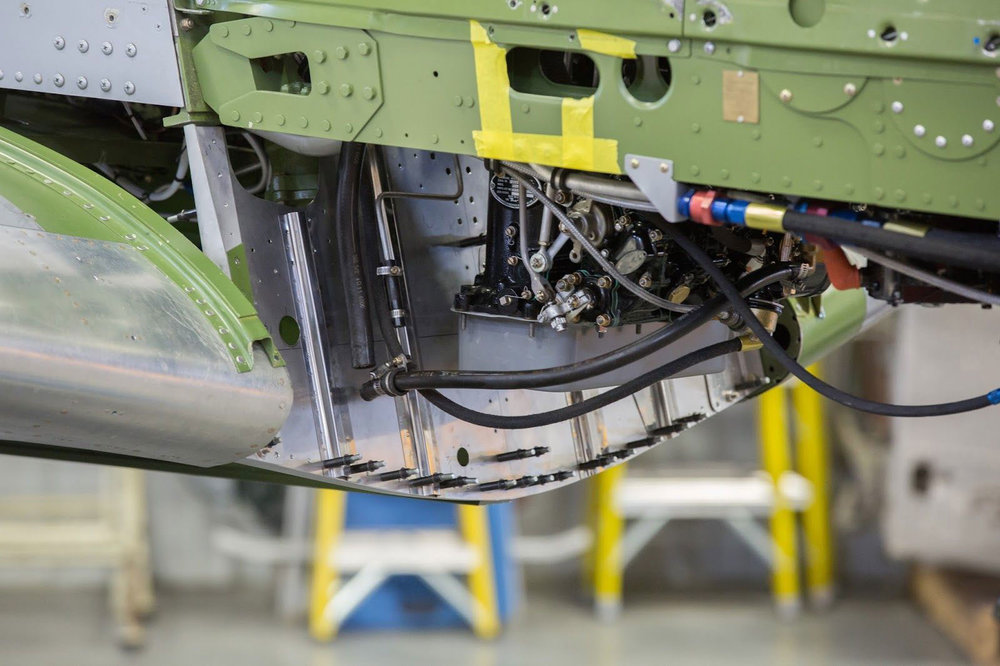 The front of the wing assembly as it looks after mating to the fuselage. The lower part of the firewall shows on this shot. You can see the carburetor and some of its linkage. 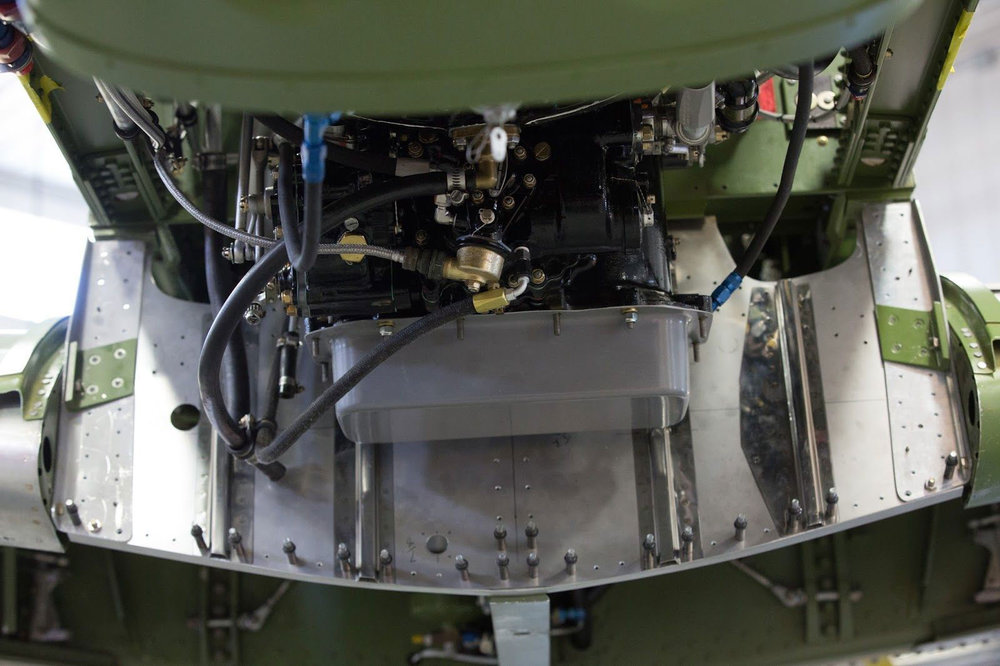 Another view shows the same area where the front of the wing center section meets the fuselage from the front. 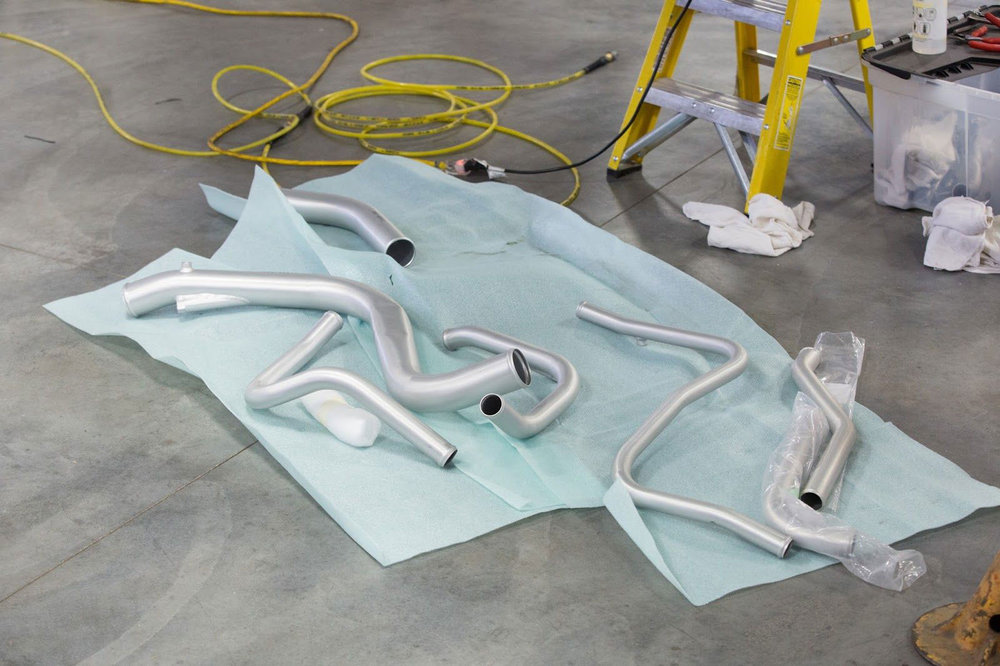 The larger of these hoses are coolant hoses, the smaller ones are aftercooler and oil lines. 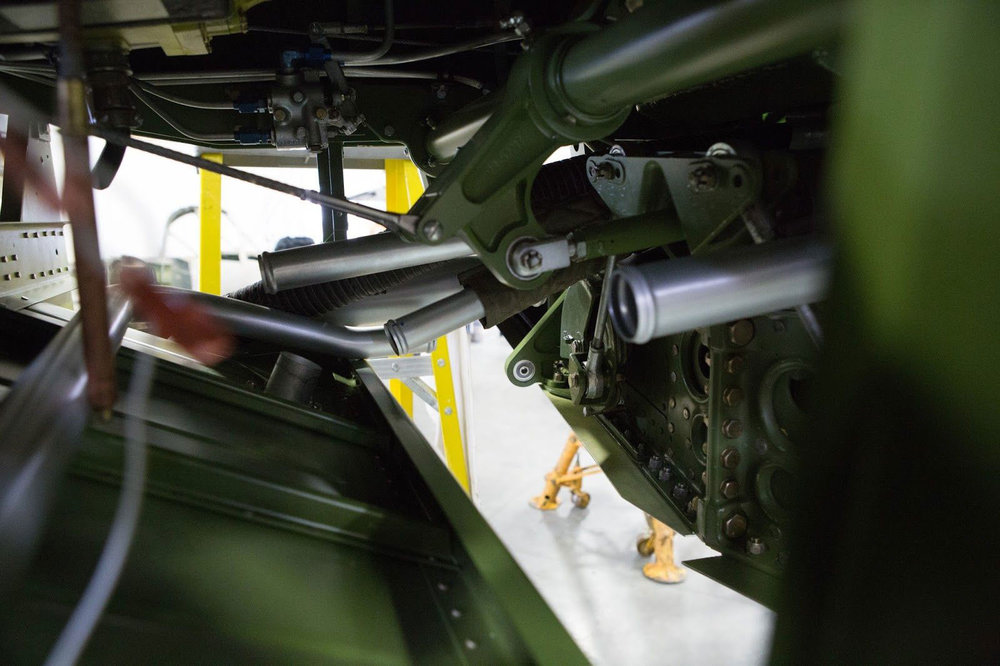 The flap actuating torque tube shows here. The horn in the middle of it is the elevator bellcrank that pivots on the flap tube. 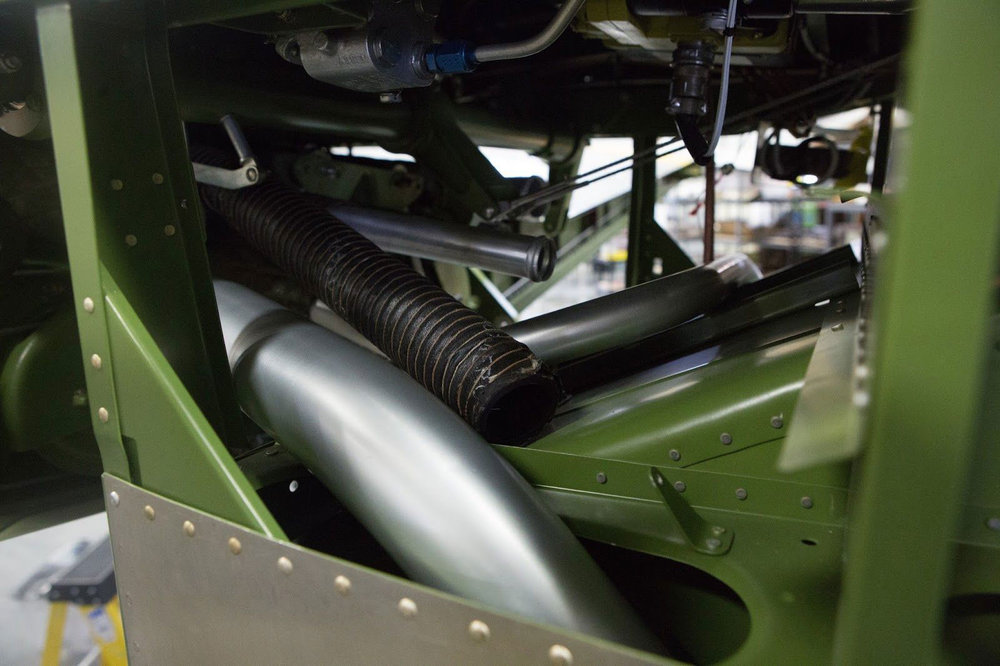 The metal hose is a coolant hose. The ribbed brown hose leads to a high pressure area above the radiator where the hose picks up warm air to carry to the cockpit. 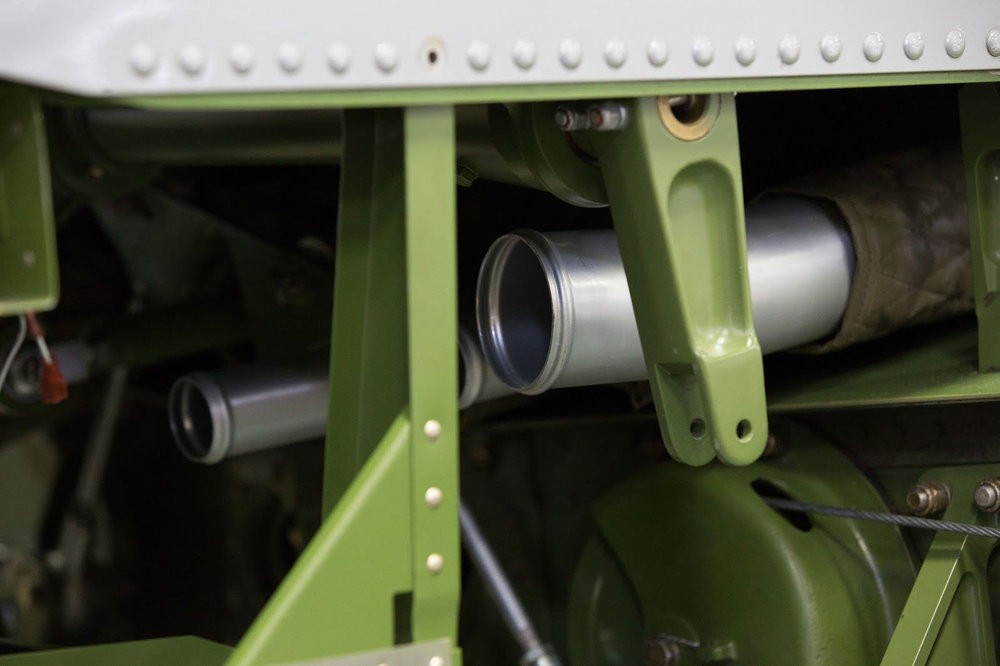 This image shows the control arm on the end of the flap actuating torque tube. Also visible are the coolant and aftercooler hoses. 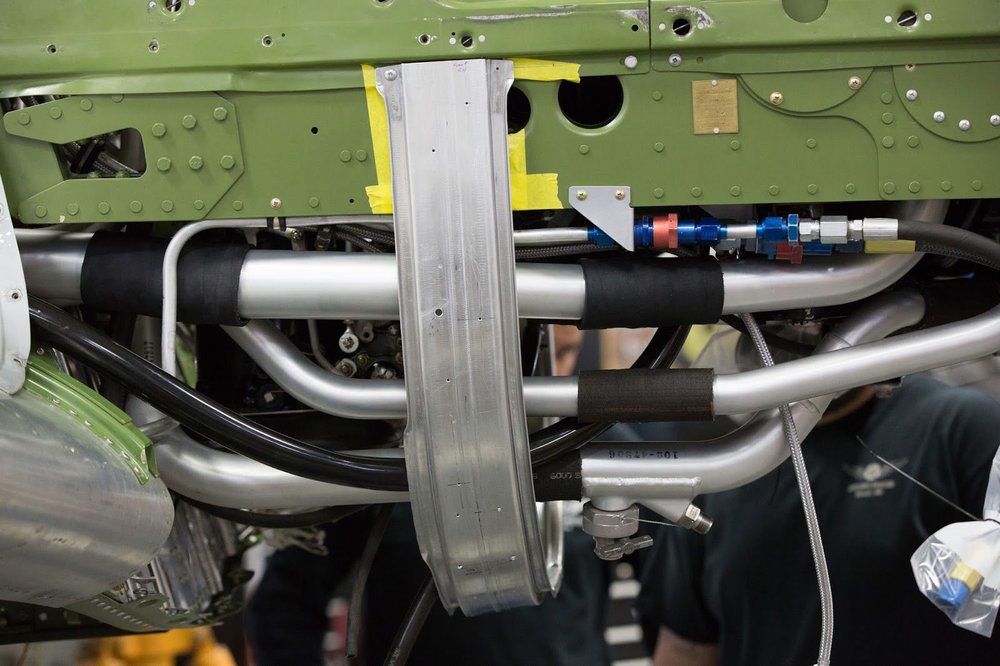 The same hoses as they look after the connections have been made. 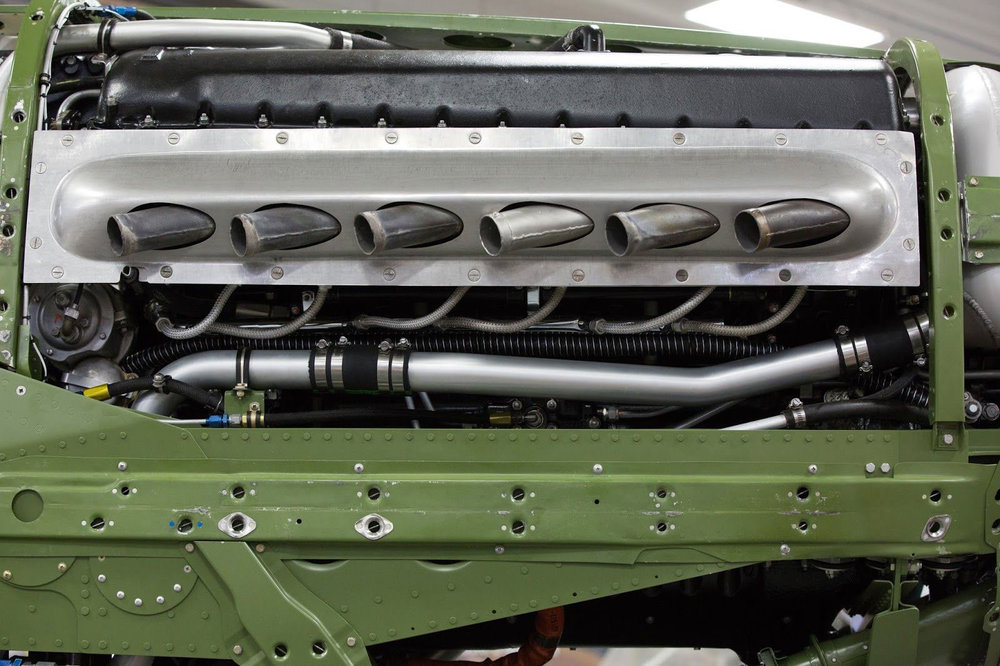 There is another coolant hose that runs above the engine mount. 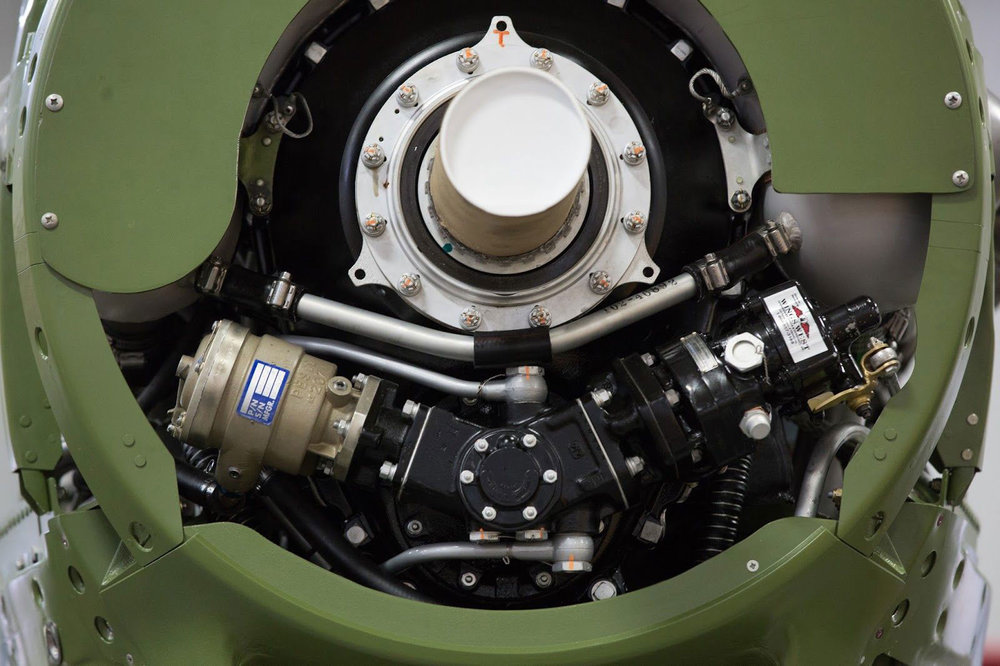 The vacuum pump (left) and hydraulic prop governor are installed.

Here we see the the doghouse and radiator in place with the rear spar of the wing showing. The pulley and cables on the back of the spar drive the ailerons. 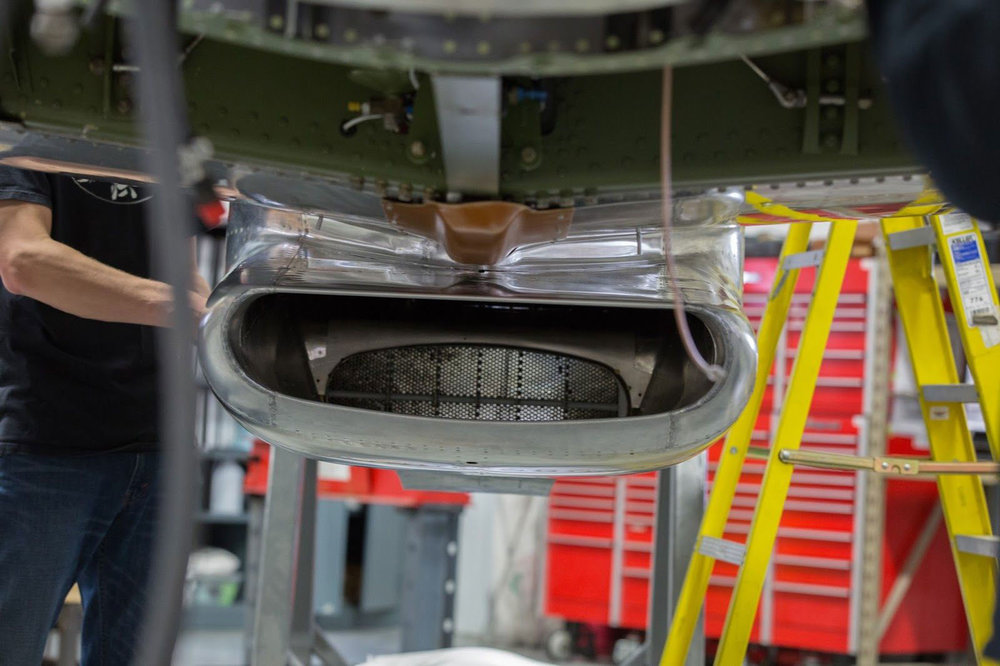 The scoop itself can finally go on now that the doghouse and wing are permanently attached. 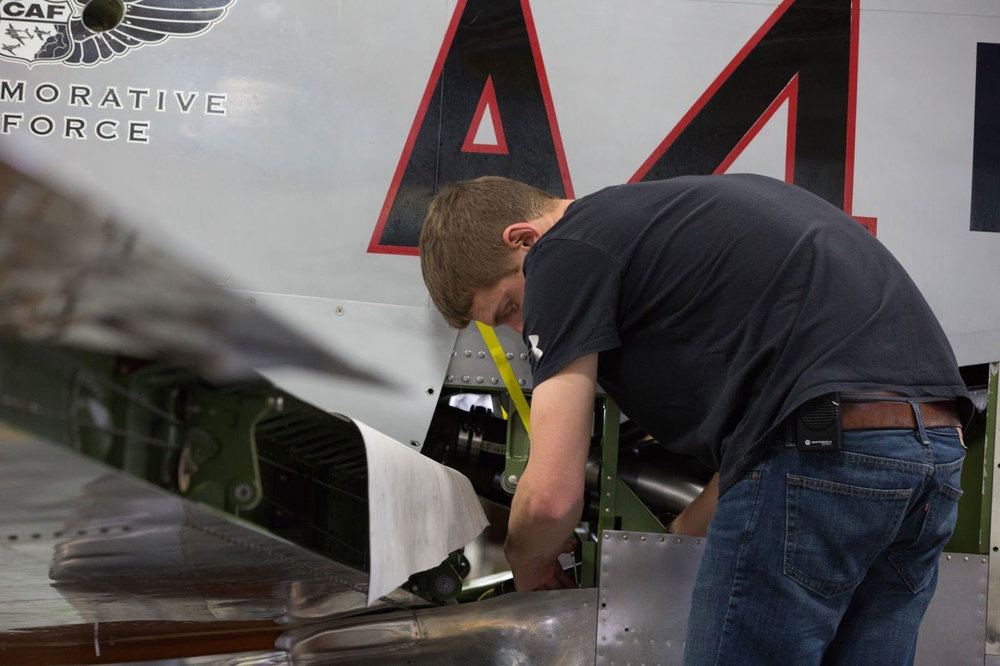 Chad is installing the scoop that he made.

Close shot of the plumbing coming from the landing gear selector valve.

Mark works on a precise fit of the skin under the wing center section. 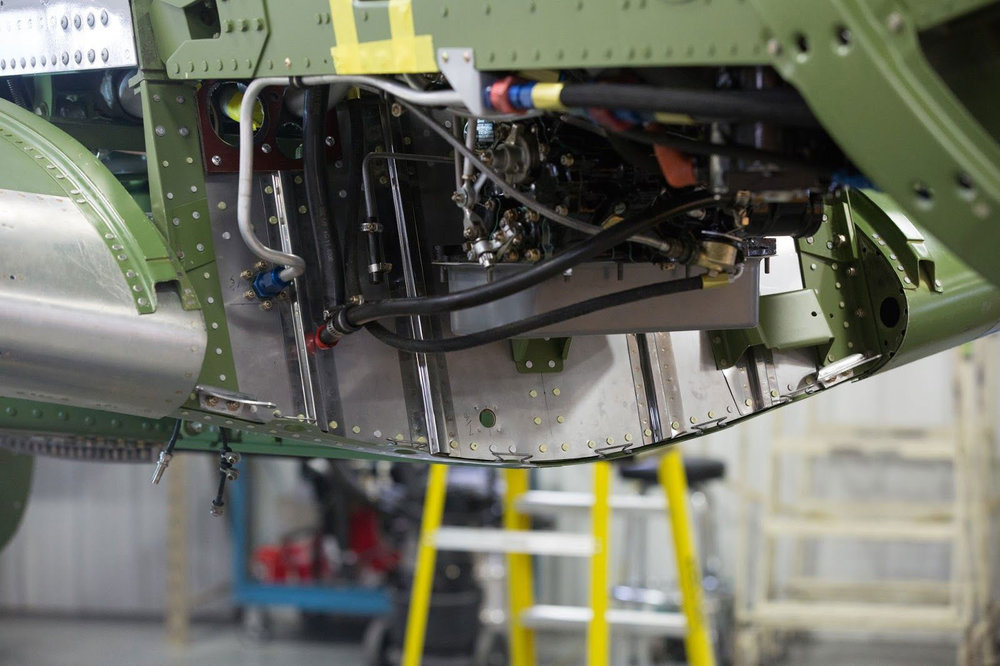 System installations continue on the lower part of the firewall. The line with the blue end couplers is an engine hydraulic pressure line that leads to a junction. That junction supplies the landing gear fairing door system as well as the landing gear selector valve. 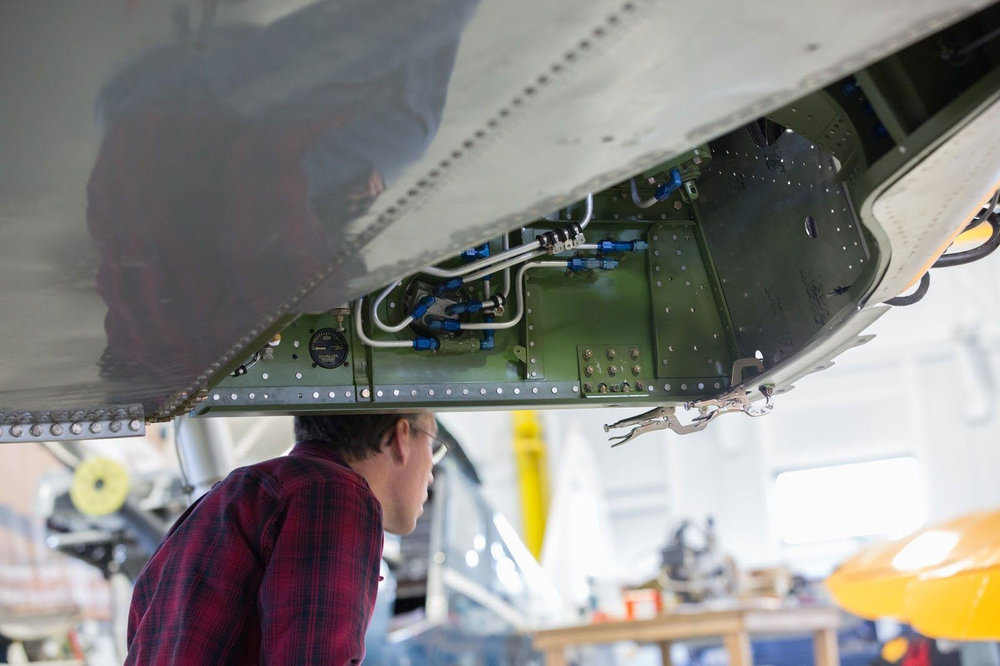 Mark Tisler inspecting the left wheel well. Mark has a long history with the Red Tail. He has been involved with this P-51C through its two restorations at Tri-State and now the repair being done at AirCorps. 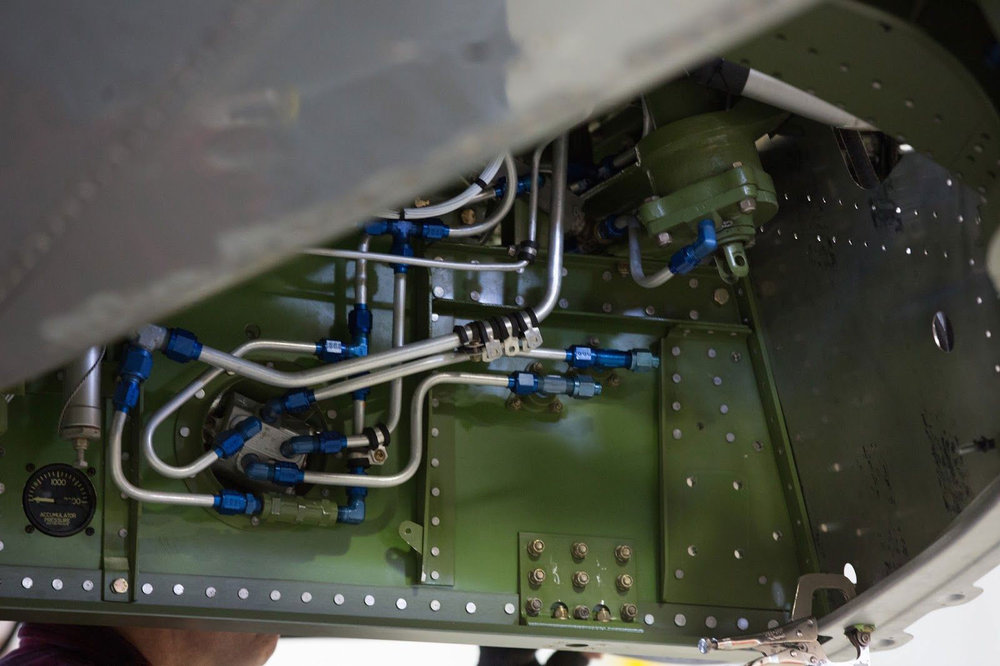 The wheel well plumbing shows clearly in this image. 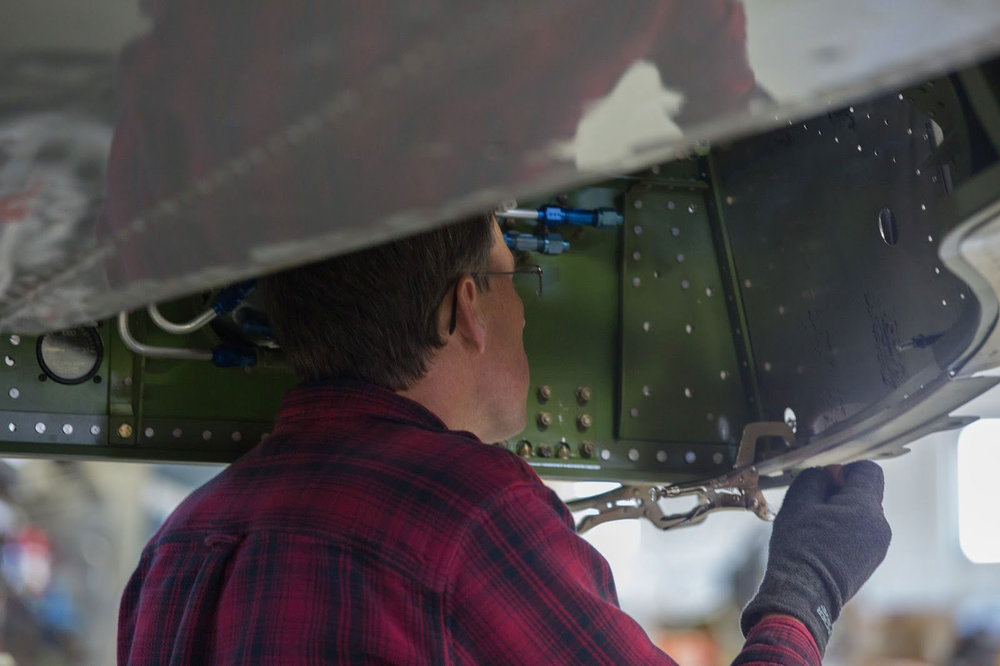 Here is a close view as Mark looks over the right side wheel well. 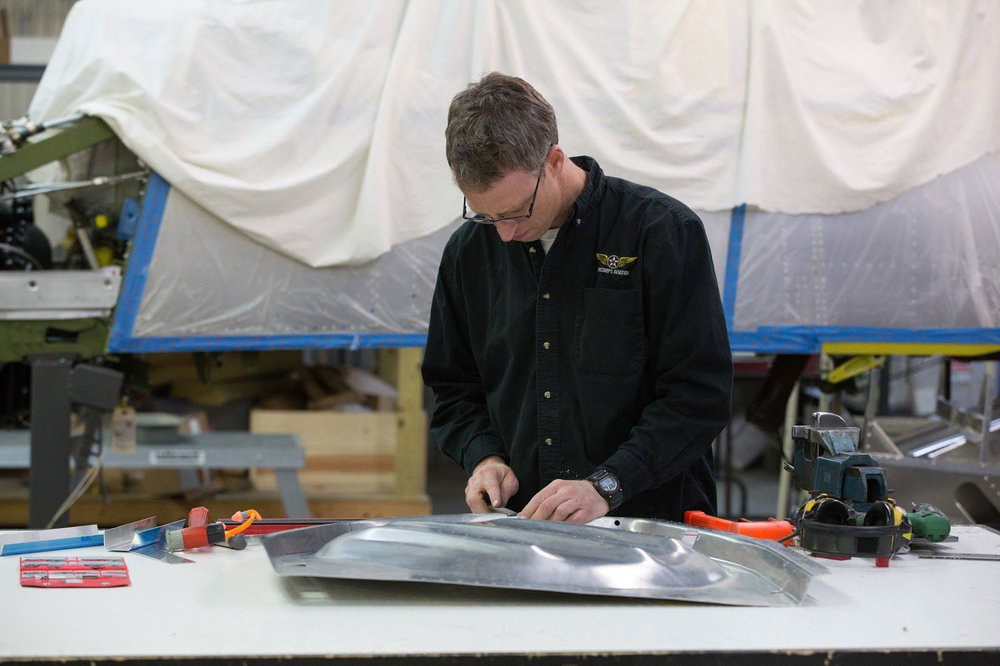 Ryan works on one of the “clamshell” main gear doors. 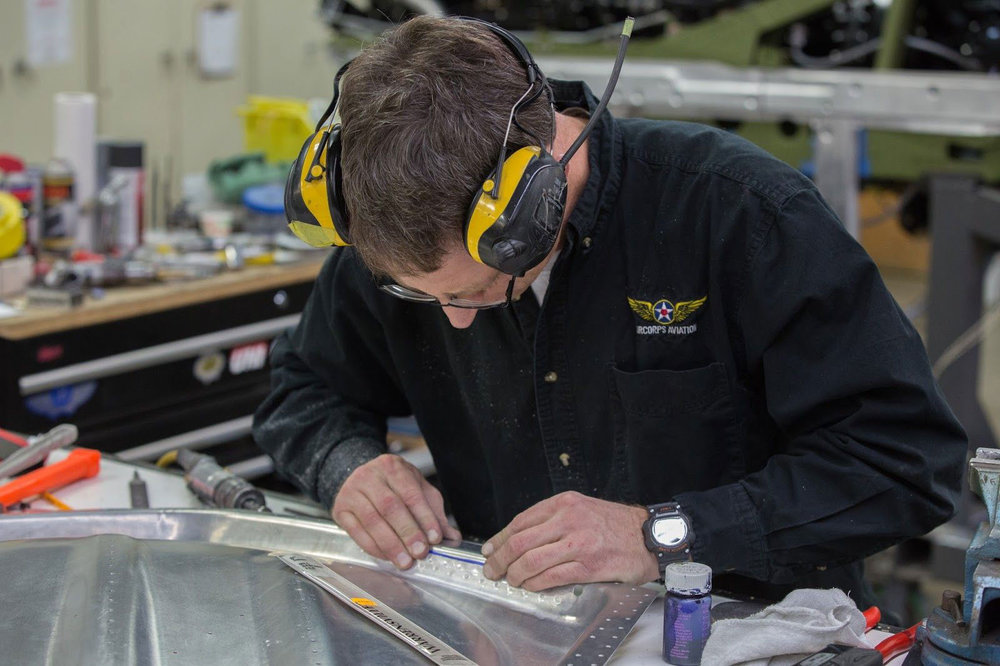 Ryan lays out where spot welds will be placed on the gear door. 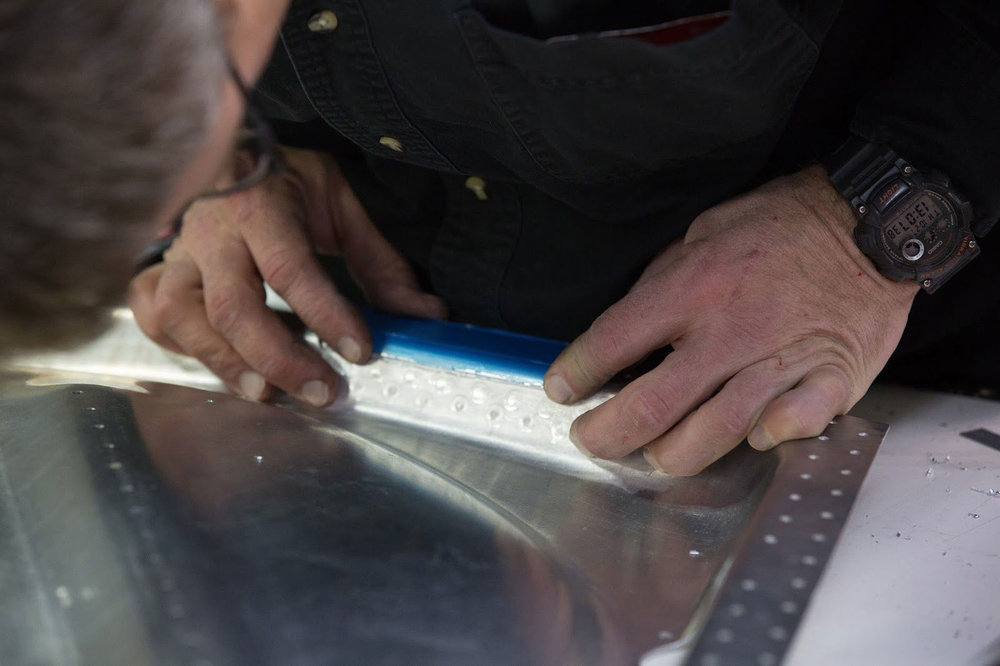 A closer view of the laying out of spot weld placement shows in this image. 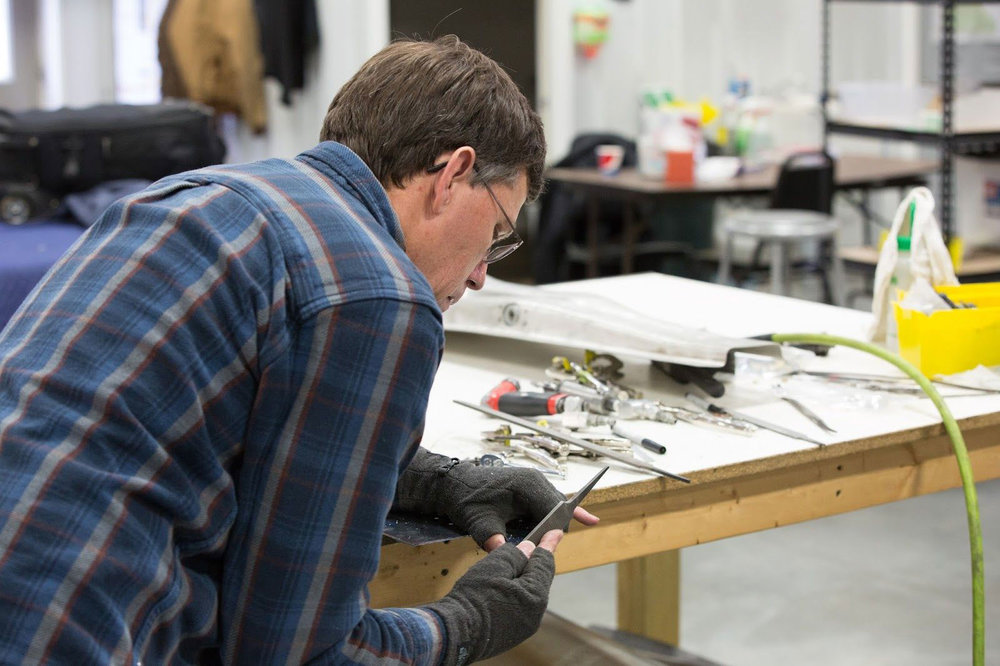 Mark finishes the edge of one of the main gear spade doors. 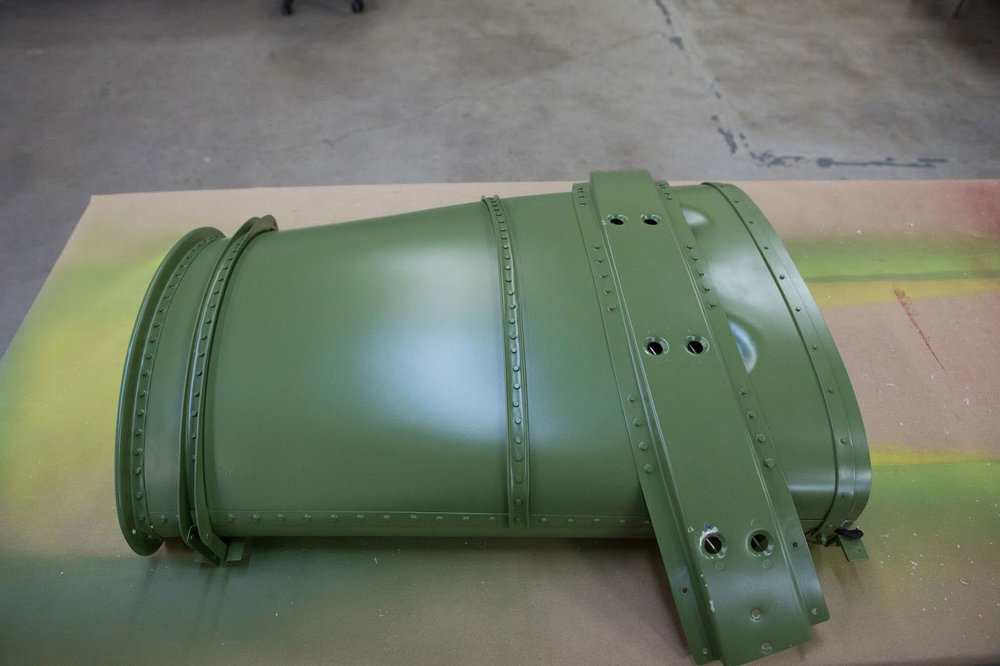 The assembly shown is the forward portion of the air intake duct. It leads to the supercharger and carburetor. The left side in the picture connects to a shorter piece bolted to the “smile”. That piece is actually listed as part of the engine mount. 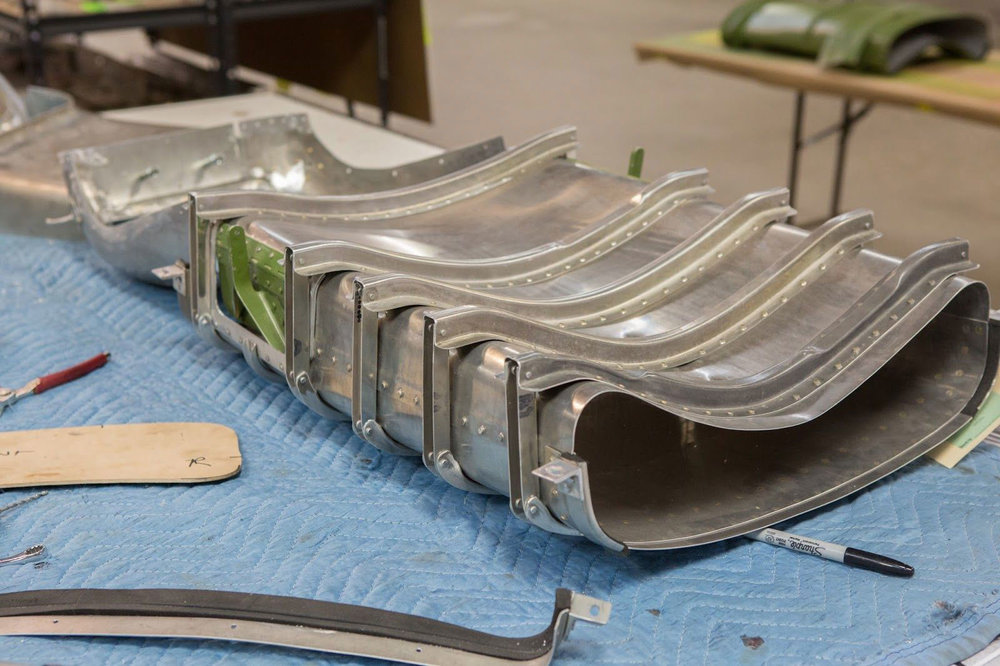 The middle section of the intake ducting has alternate air doors on each side. 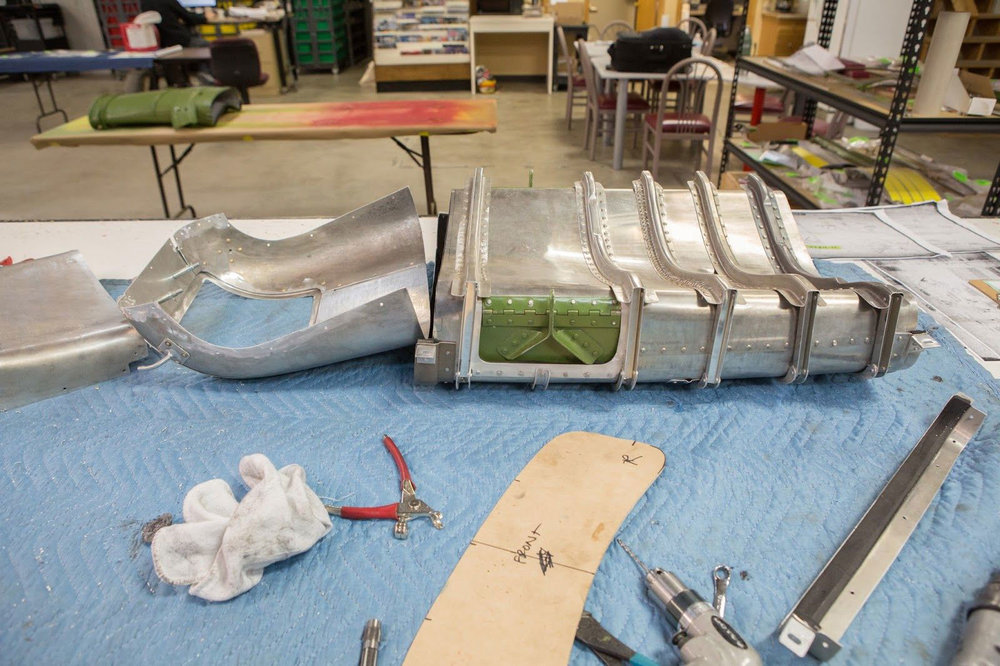 The alternate air door in the photo is the green painted piece with the hinge. If the normal air induction gets restricted these open against light spring pressure. The lowered pressure in the blocked or partially blocked system pulls them in. They provide alternate air to compensate for whatever restriction is in the normal intake route. 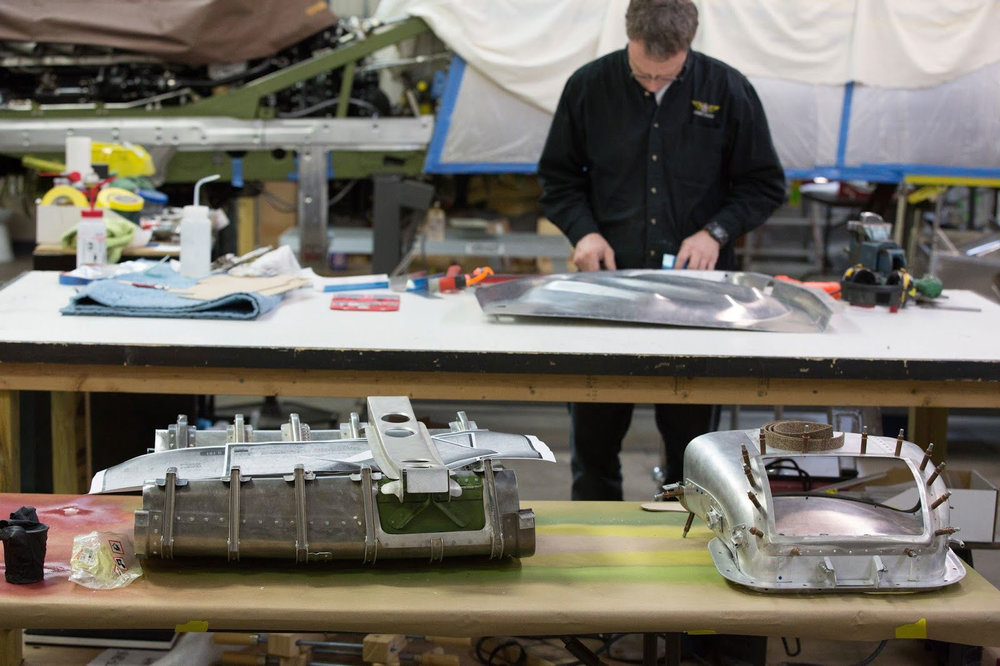 There is an alternate air door on each side. 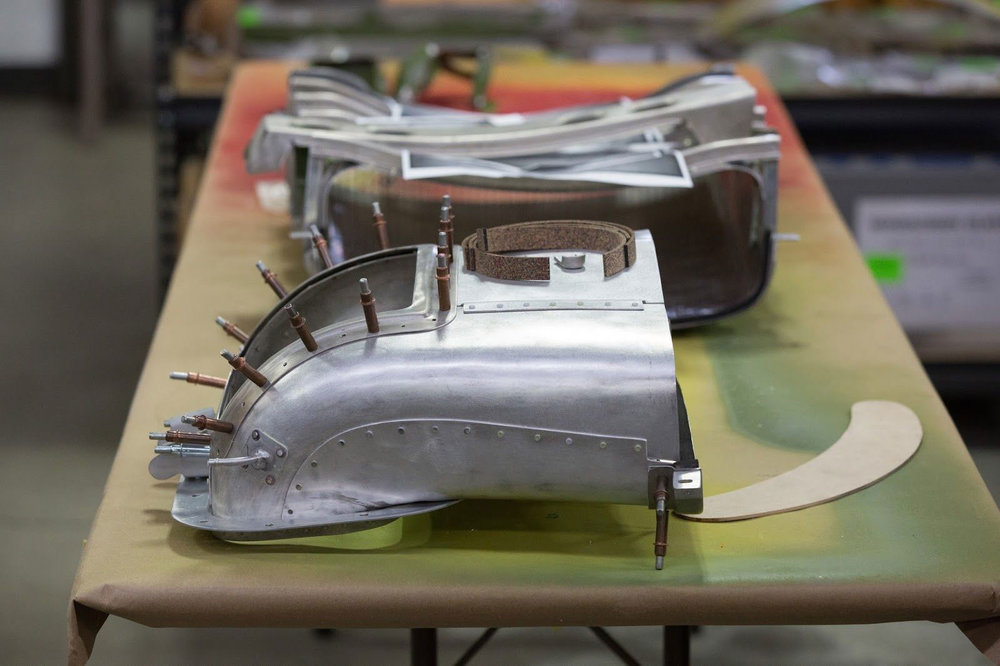 This image gives us a nice tight shot of the elbow in the air induction system. It connects the intake ducting system to the carburetor.

Now that the wing has been mounted and all those coolant, intercooler, and oil hoses are connected, the cockpit floor can be permanently installed. At this  stage, the instruments and flight controls for the wing can be connected 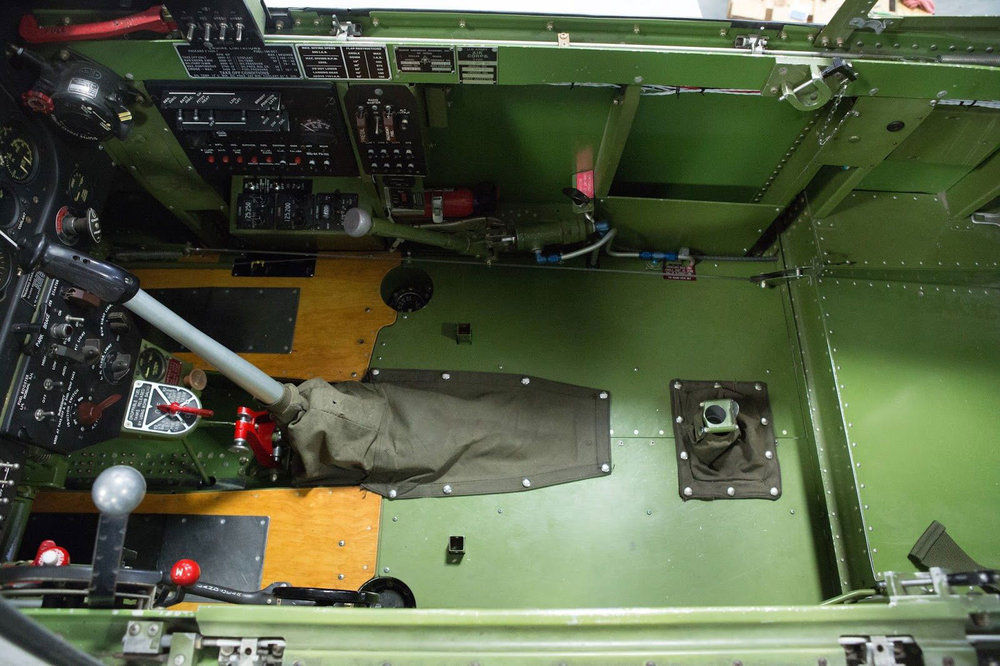 In this nice side view of the cockpit, the pilot’s seat hasn’t been installed yet. 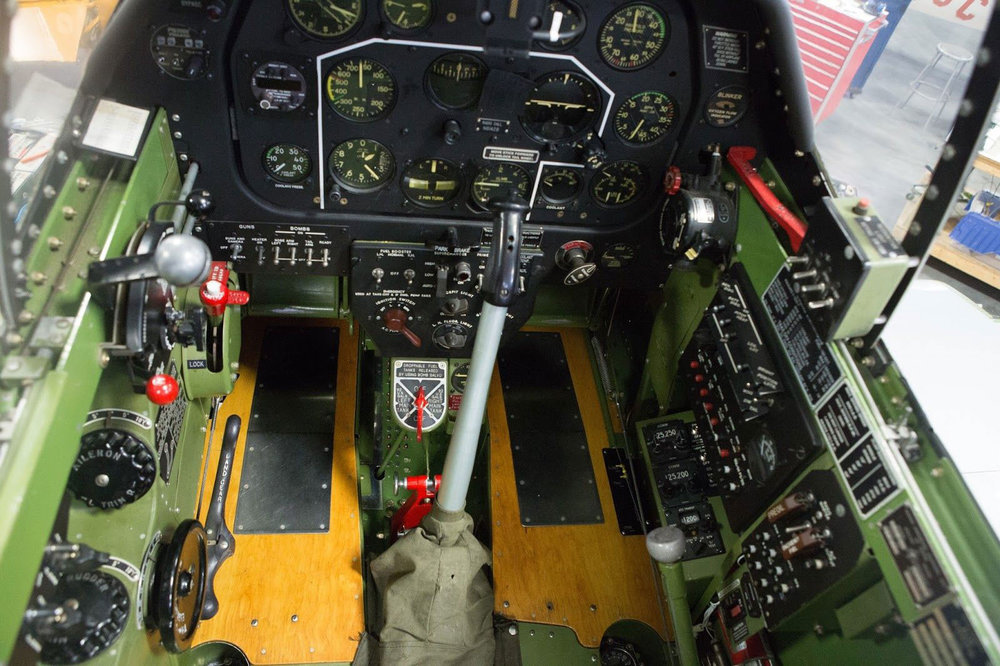 Another view of the cockpit, this time it is from the pilot’s position. 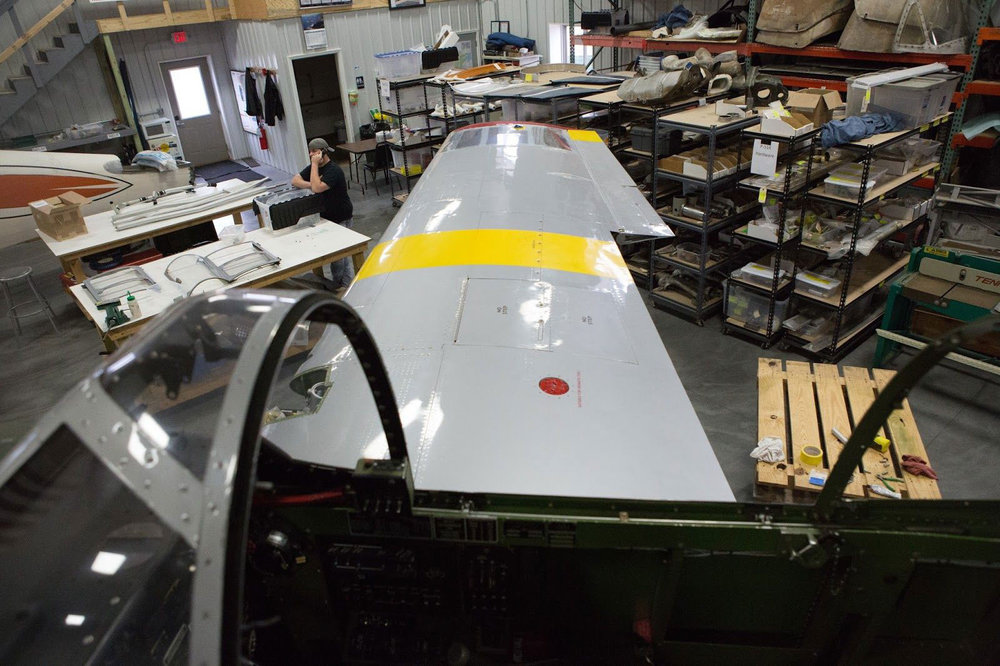 The right wing extends out over the hangar floor.