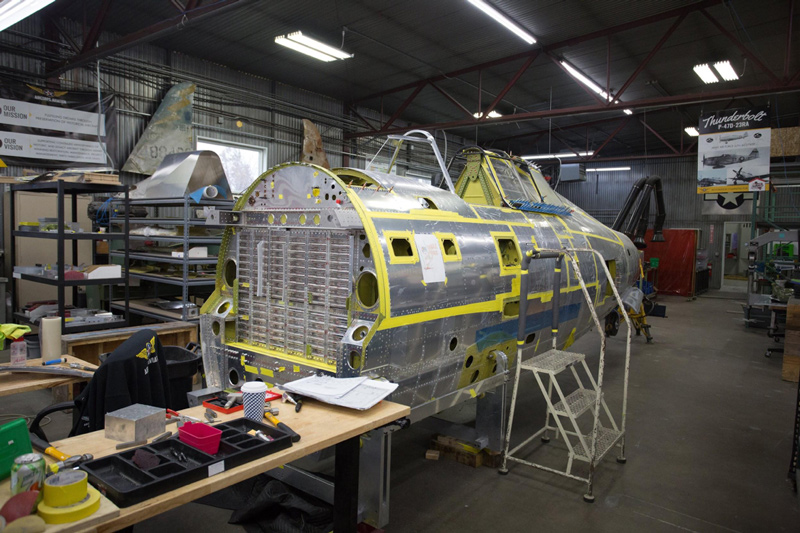 Work continues on the fuselage as cockpit fittings and the ducting for the turbocharger and intercooler are installed.

This month work progressed on the fuselage cockpit interior and cockpit enclosure, the same general areas as last month.  Equipment installation on a complex, rare fighter like this one takes a lot of time! In this update we will also look into the connections between women pilots and the P-47.

Most of the fuselage work this month centered on equipment installation.

The WASP and WAF Connection 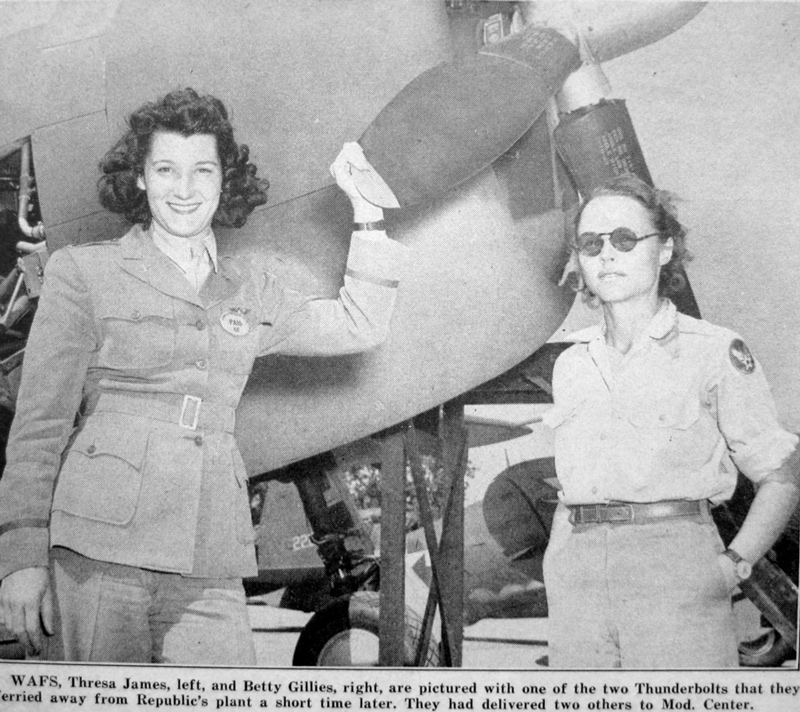 Betty Gillies was one of the “originals”, or the first 27 woman to sign up for the WAFS. In fact, Betty was the very first to sign up, and she was also the first woman to fly the P-47. Photo courtesy of Harold Morgan Collection

One of the lesser known and definitely under-appreciated contributions to the war effort came from women pilots. 1,102 women served in either, or both, the Women’s Auxiliary Ferrying Squadron (WAFS) and the Women Airforce Service Pilots (WASP).

The WAFS were hired as civilian ferry pilots, and were organized and commanded by Nancy Harkness Love and the USAAF Ferry Command.  Nancy was originally restricted to hiring 25 women, but she eventually hired 27. The women hired for the ferry command were all experienced, trained pilots, and were required to have at least 500 hours of flying time.  In the beginning, the WAFS were only authorized to ferry light trainers and utility aircraft. That policy was soon to change, however, and in time the WAFS/WASP flew every aircraft type in the USAAF inventory.

During the same time period a second group of women pilots was also established. The Women’s Flying Training Detachment or WTFD was organized and commanded by Jackie Cochran.The WFTD pilots were trained to fly by going through exactly the same pilot training as the male Air Force cadets. At its onset, the program was based at the Houston, Texas Municipal Airport. Once the training program was in full swing, it became clear that Houston was too congested, and flight training time was too limited by morning fog and frequent thunderstorms for efficient training purposes. Therefore, the training program was moved to Avenger Field in Sweetwater, Texas in February 1943.  By August, the WAF and WFTD were combined into a single organization , the Women Air Force Service Pilots or WASP.

At the time of combining the two groups, Jackie Cochran was named overall Director of Women Pilots, and Nancy Harkness Love the  Director of the Women Pilots in the Air Transport Command. 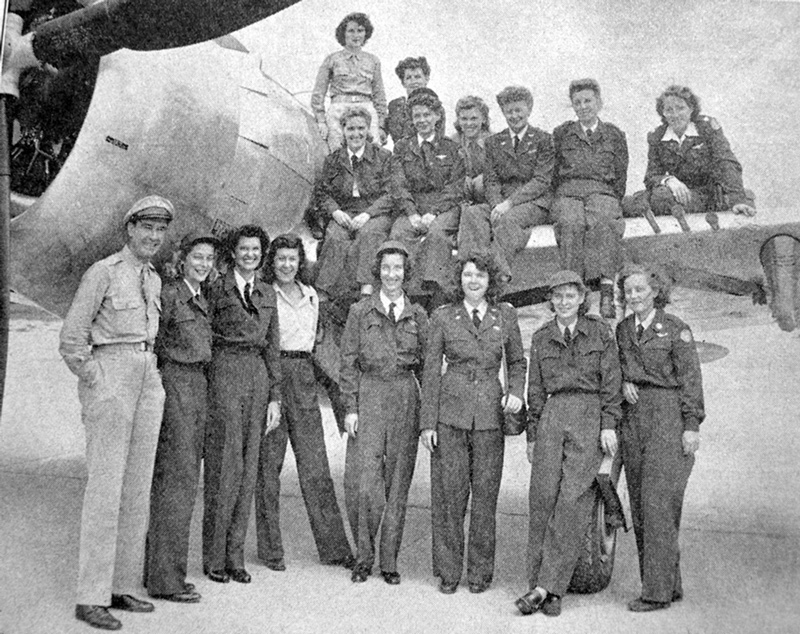 While the WASP and WAF contributions were varied and numerous, including providing flight training, target towing, flight testing and other missions; the focus here will be on ferrying fighters. The need for ferrying fighters was greater than transports and bombers because, for the most part, they were shipped by sea to combat areas.  Bombers and transports were ferried by women pilots as well, but many made the flight to Europe or other theaters instead of being shipped.

The logistics of getting planes to combat areas presented a real challenge. In the east, Republic had factories building P-47s in Farmingdale, N.Y. and Evansville, IN.  Curtiss was building P-40s in Buffalo, N.Y. and Bell was pushing P-39s and later P-63s out the door of their factory in Niagara Falls, N.Y. Further west, North American had fighter factories in Inglewood, CA and near Dallas, TX.

From each of these geographically widespread factories, a portion of these fighters were destined for Europe and needed to be shipped from Newark, N.J., while others needed to get to Long Beach and Alameda, CA to be loaded on carriers and sent to the SW Pacific or the China, Burma, India Theater.  Other fighters went west to Great Falls, Montana to be picked up and flown to Russia via Alaska through the Lend-Lease program.

The location of these factories in relationship to their ports of embarkation required the ferrying of thousands of fighters. This need was the original impetus for forming the WAFS. Nancy Love set up four ferrying squadrons, the 5th Ferrying Group, at Love Field in Dallas, the 2nd Ferrying Group at New Castle Army Air Base in Wilmington, Delaware, the 3rd in Romulus, Michigan and the 6th in Long Beach, California.1

It was common for WAFS and later WASP, to fly a Mustang from Dallas or Inglewood to Newark, take ground transportation to Curtiss, Republic or Bell, pick up a fighter and fly it west to Long Beach or Great Falls. Many Farmingdale P-47s went to Evansville’s modification center to get equipment suited for the SW Pacific or the CBI, and those as well as Evansville Thunderbolts were flown by women and men ferry pilots to Long Beach and on to Alameda Naval Air Station to be loaded on carriers. 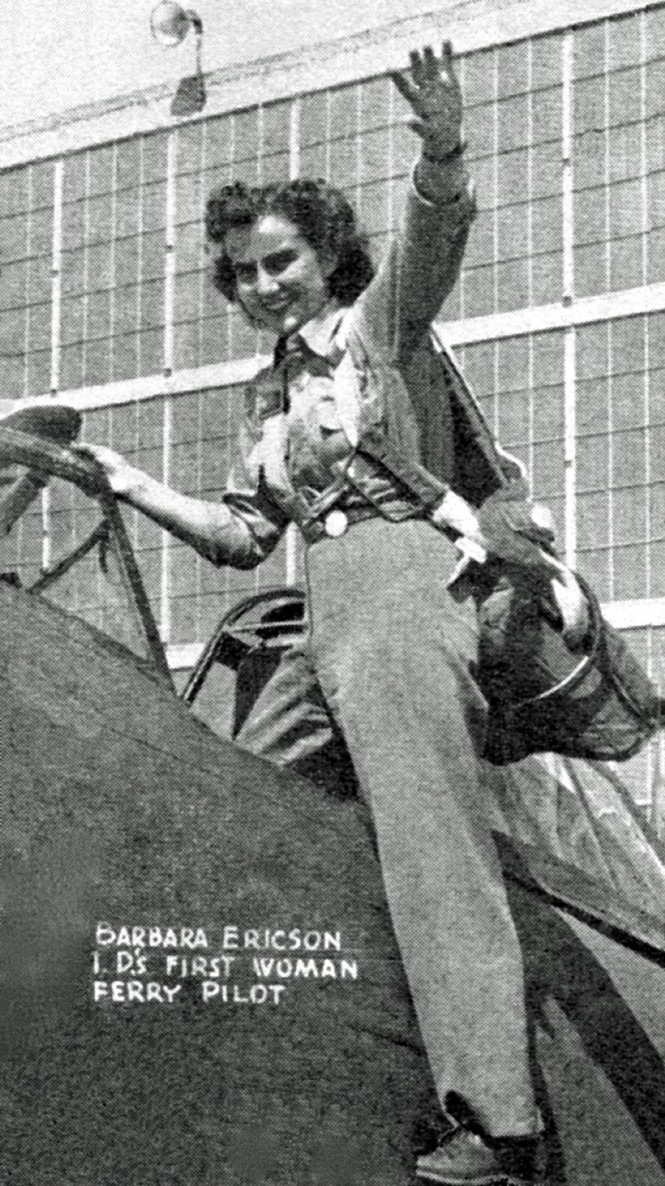 Barbara Erickson became the first WASP to receive the Air Medal for Meritorious Achievement as a pilot. Erickson received her medal for completing four 2,000 mile deliveries of three different types of aircraft in slightly more than 5 days of actual flying. She was also the second woman to check out in the P-51/A-36. 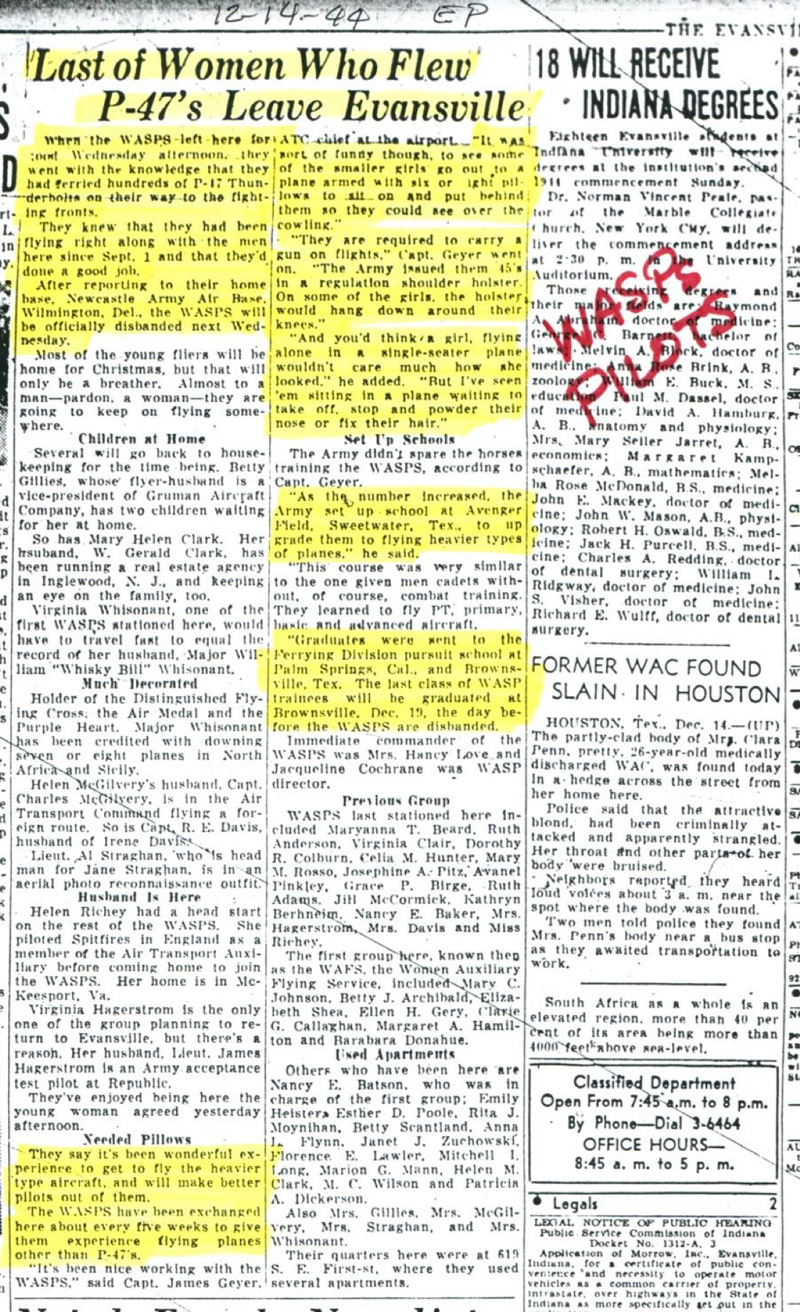 The Evansville Press published an article on the departure of the WASP ferry pilots just before the disbanding of the WASP on December 20, 1944. Scanned image courtesy of Harold Morgan Collection

The WASP were never militarized as an official auxiliary force. Because that was the case, the 38 women who were killed while serving in WASP were not entitled to burial expenses or survivor benefit. The cost of shipping home the bodies of the dead was often covered by fellow WASP collecting funds among themselves.

Their contributions and sacrifice should never be forgotten.

For more information on the WASP, there are a number of fine books like Sarah Byrn Rickman’s WASP of the Ferry Command . Also  check the National WASP WWII Museum website at: https://waspmuseum.org/, or better yet, visit them at Avenger Field in Sweetwater, Texas! 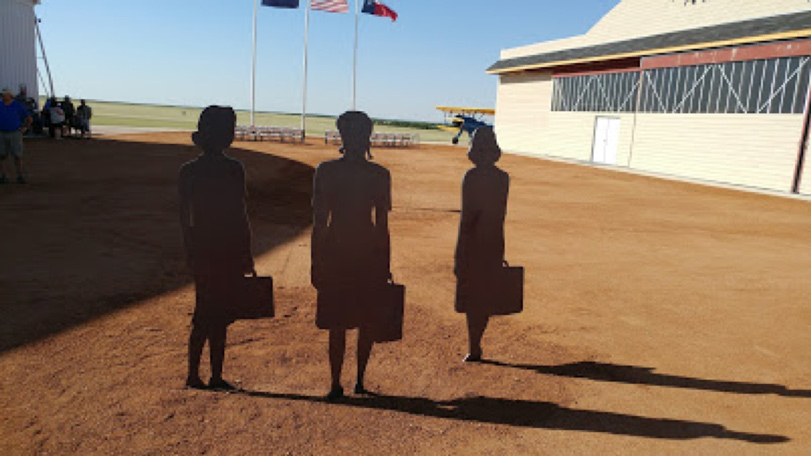 A scene in the courtyard of the National WASP WWII Museum