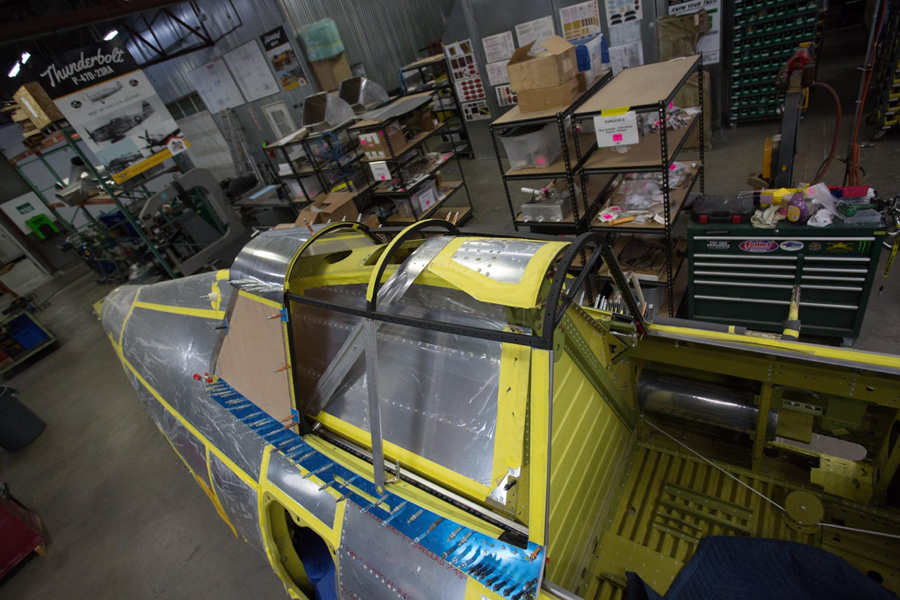 The complicated cockpit enclosure is getting closer to a finished assembly.

The fuselage extension, cockpit enclosure, and wings were the centers of activity in the restoration shop this month. We will also look into Republic Aviation and Evansville, Indiana’s part in the Arsenal of Democracy.

Republic Aviation Corporation and Evansville, Indiana, Big Contributors to the Arsenal of Democracy

The ongoing planning for next spring’s Arsenal of Democracy Flyover, celebrating the 75th anniversary of VE Day, suggests that a brief history of Republic Aviation Corporation’s part in the famed arsenal is a timely subject.

The Arsenal of Democracy term was first used by President Franklin Delano Roosevelt in a 1940 radio broadcast to describe the need for production efforts to aid Great Britain to defeat the Axis Powers.

After the United States entered the war, the Arsenal of Democracy term expanded to signify the massive unified effort that men, women, manufacturers and the military forces accomplished to produce and utilize the tools of war.

Again in FDR’s words, a month after Pearl Harbor “Powerful enemies must be out-fought and out-produced, It is not enough to turn out just a few more planes, a few more tanks, a few more guns, a few more ships than can be turned out by our enemies,” he said. “We must out-produce them overwhelmingly, so that there can be no question of our ability to provide a crushing superiority of equipment in any theatre of the world war.”

The ramp-up in manufacturing was extraordinary and every sector of American society played its part.

Figures that illustrate the production increases in the aviation sector include growth in annual production from 6,000 aircraft in 1939 to a peak of 9,000 in the single month of March of 1944.

Republic Aviation was a major part of the expansion of production that made victory a reality . 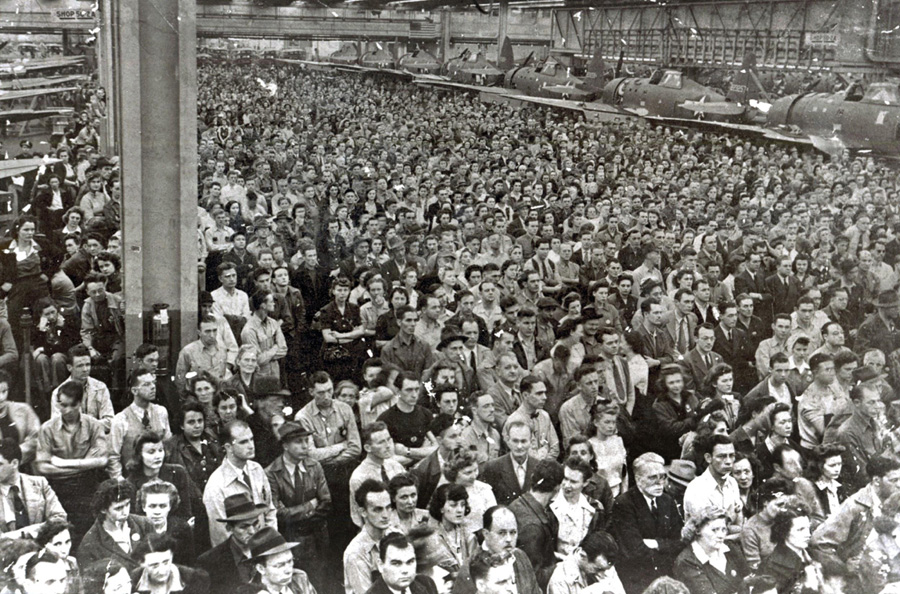 Part of the workforce gathered to celebrate the completion of the 1,000th P-47 at the Evansville Republic Factory1. Photo courtesy of Harold B. Morgan Collection

The first P-47s reached England in late December 1942. There were 88 of the big fighters shipped to the 8th Air Force. These were P-47Cs produced at the Farmingdale, N.Y. Republic factory. It was March 10, 1943 before the first operational sweep by the 4th Fighter Group consisting of 14 P-47Cs.2

By February 1943, the P-47D was coming off the production line.  Republic had foreseen major demand for the Thunderbolt and ground was broken for another factory in Evansville, Indiana on April 11, 1942.  By September, the first Evansville P-47 flew. Eventually, 15,579 P-47s would be built, more than any other USAAF fighter.  They equipped 40 percent of overseas fighter groups in 1944 and 1945.

Design changes were a large part of the cost reductions.

Republic and all the other major aircraft manufacturers depended on subcontractors to support the massive production effort that was needed during the war. Many of those were companies that produced consumer goods before the war and had to completely change their production over to aircraft parts or assembly. A few of the more important subcontractors for the Evansville Republic plant were:

Evansville, Indiana had many more contributions to the Arsenal of Democracy. Parts and subassemblies for the F4F Wildcat, F4U Corsair, PBY, B-29, and others were built in Evansville. The major non-aviation related product was 167 LSTs (Landing Ship Tank) produced at the Missouri Valley Bridge and Iron Company shipyard.

In fact, during World War II, Evansville became the most productive war materials manufacturing city in the world per capita.5