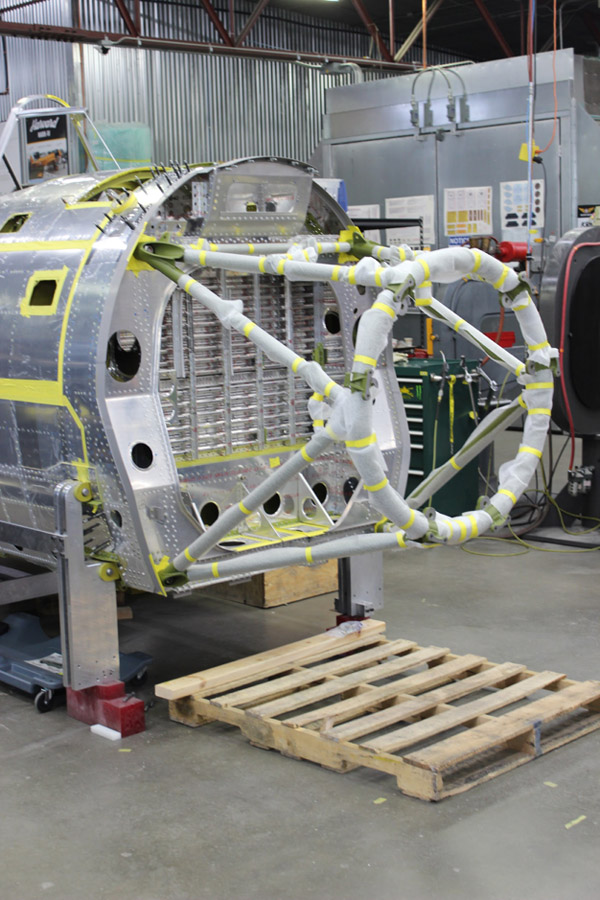 2,360 pounds of engine will be supported by the engine mount.

This month the engine mount was fitted and work continued on the unique radio installation necessitated by the Christmas tree tank field modification. Wing structure was added to the fixture and parts fabrication continued.  We will also examine the missions that were conducted during 42-27609’s time in the Papua New Guinea combat zone.

An exciting and visible sign of progress is the motor mount attached to the firewall for trial fitting. It is still wrapped in protective plastic foam sheet.

One of the unique features of this Thunderbolt is that it had a field modification by the 5th Air Force to increase range. The modification, called a Christmas tree tank because of its shape, was usually removed by late summer of 1944, but 42-27609 still had the tank.

The 42 gallon tank was placed right behind the pilot and occupied the space where the supercharger oil tank and the communication receiver were originally placed. Consequently, those installations had to be modified to make space available for the new tank.

Without having the original parts to either duplicate or repair and use, it would have been impossible to install this unique modification because engineering drawings aren’t available for this field modification.

We’ll take a look at how the original installation was configured and then show the modifications.

Progress continues on both wings. This month, the work was mainly related to the spars.

The Southwest Pacific War, May and June, 1944

Early in the Papua New Guinea campaign, the US and Australian ground forces, the 5th Air Force, and RAAF had defeated the Japanese land attempt to take Port Moresby by attacks on the Kokoda Trail and amphibious landings at Milne Bay. The Kokoda Trail leads over the Owen Stanley Mountains from the northeast coast of Papua. 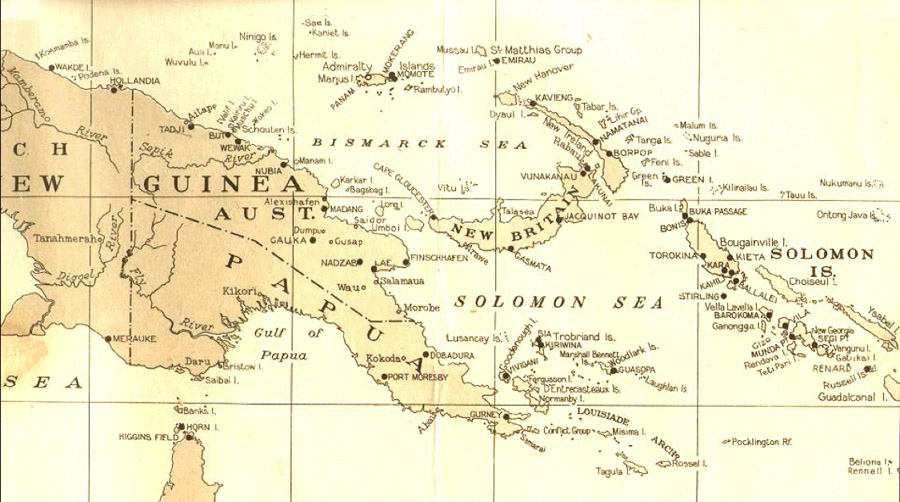 Map of WWII airfields in Papua New Guinea, from MILITARY AIRFIELDS IN AUSTRALIA AND THE WESTERN PACIFIC AREA DURING WORLD WAR 2, https://www.ozatwar.com/airfields.htm , downloaded 7/12/2019

The early air operations for this period were designed to eliminate the Japanese air threat in the area from Wewak to Hollandia in western New Guinea. By March, Hollandia had been reinforced and had 250 Japanese aircraft. About half were combat ready at any one time. Allied air superiority had been attained in the Wewak area after months of pounding the Japanese stronghold with B-25s, A-20s and P-47s.  However, the Japanese were still able to use it as a staging base.1

General Kenney ordered attacks on both Hollandia and Wewak. The attacks in late March eliminated the threat of Japanese air attacks on the coming invasion of the Holandia area and allowed the use of carrier air forces to aid in the invasion.

Sunday April 16, 1944 was a bad day for the 5th Air Force. By this time the Japanese air resistance was eliminated, but weather hazards were not. 130 bombers and 40 fighters set out to attack Tadji in the Hollandia area but bad weather contributed to the loss of 32 crewmen and 31 aircraft.2 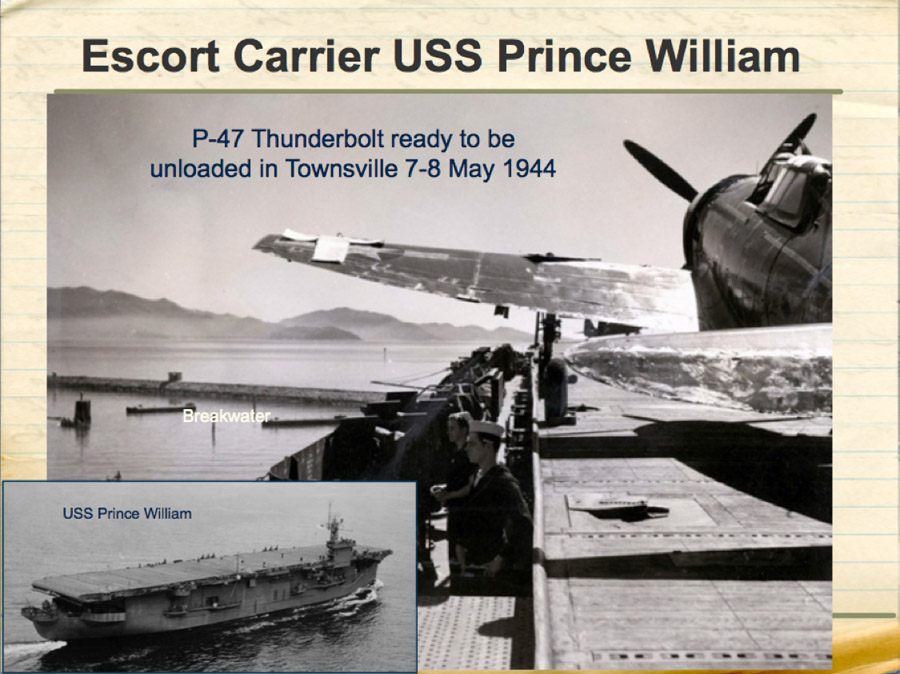 It is interesting to note what missions the 5th Air Force was flying during 42-27609’s combat career. From a publication of the Center for Air Force History,  Kit Carter and Robert Mueller’s, Combat Chronology 1941-1945, I have taken the 5th Air Force’s missions for the dates that our P-47 could have been in combat.

Note that on 15 June, 1944 the 5th Air Force was incorporated into the Far East Air Force (FEAF). FEAF was formed with jurisdiction over the Fifth and Thirteenth AFs with General Kenney in overall command .

The following list of missions are those that either definitely included P-47s (by naming the type), or possibly included Thunderbolts because either the acronym FB for fighter bombers or fgtrs (fighters) was used. There were other missions in this busy period that only listed HB (heavy bombers) or MD (light bombers) as participating aircraft.  Acronyms, punctuation, abbreviations, and grammatical choices in the listing are those of the original authors. The bolded dates are an addition by me, in the interest of visual clarity.

The mission list for 42-27609’s active period is long, so this month we will list the missions that took place in May and June of 1944. Later updates will have missions from July through September 18, 1944; when 42-27609 was struck from flying status.

5/8/44  Fifth AF B-24’s and P-40’s operating in Geelvink Bay area attack Mokmer A/F and nearby shipping. A-20’s and FBs continue to pound T/Os along NE New Guinea coast from Wewak to Hansa Bay and along Sepik.

5/15/44  Fifth AF Wewak-Hansa Bay area is again hit by A-20’s, B-24’s, and FBs. B-24’s and B-25’s attack numerous tgts in Wakde-Sawar-Sarmi-Maffin Bay areas and on Biak I. Thirteenth Air TF B-24’s from the Admiralties bomb supply and bivouac areas on Mariaon and Tagaulap Is and AA guns on Woleai and Paliau Is.

5/29/44  Fifth AF B-24’s pound gun positions, defense areas, and troops, as first tank battle of SWPA is fought W of Parai on Biak I. Other B-24’s pound A/Fs on nearby mainland at Timoeka and Babo. A-20’s, B-25’s, and P-47’s, along with RAAF airplanes and a few HBs from the Biak strike, saturating Wewak area with continuous air strikes. In WakdeSarmi battle zone, B-25’s and P-40’s hit forces in Mount Saskin area. B-24’s of Thirteenth Air TF bomb Woleai and other nearby islands in the Carolines 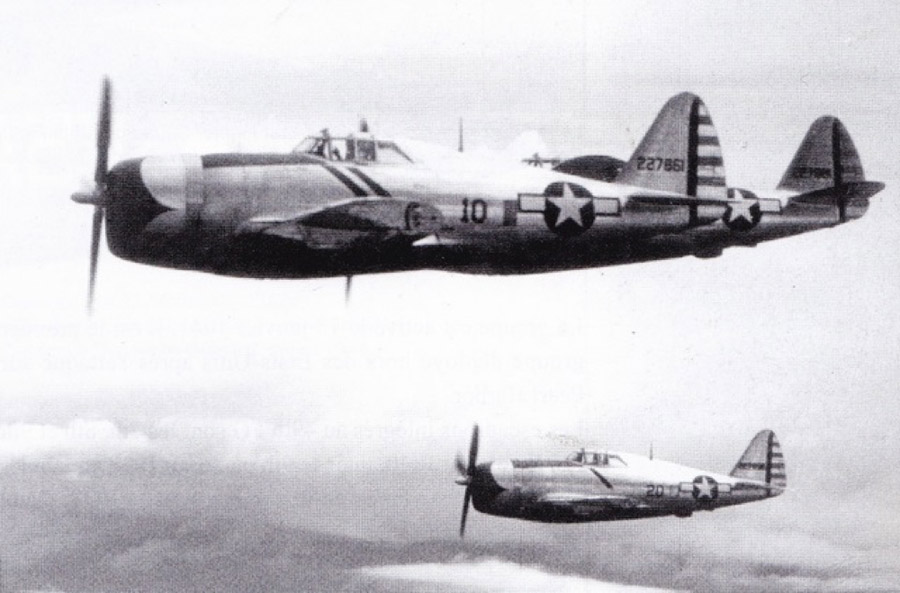 6/3/44  Fifth AF B-25’s, A-20’s, and B-24’s hit Timoeka A/F and nearby villages, shipping off Manokwari, Seroei Village on Japen I, and positions N of Mokmer, and strafe Mokmer, Sorido and Kamiri A/Fs. P-38’s and P-47’s battle ftrs over Biak I and over Babo area. P-47’s and P-40’s hit Sawar A/F, supplies and fuel dumps in Sarmi and Orai R areas, and hideouts and occupied areas along coast. B-24’s and FBs maintain consistent pounding of numerous tgts in Wewak-Hansa Bay coastal region. B-24’s of Thirteenth Air TF bomb Eten and Dublon.

6/16/44  FEAF Bmrs and ftrs hit widespread tgts in SWPA and in SOPAC. Personnel areas and barges along coast in Wewak and Hansa Bay areas are hit throughout the day. A/Fs and shipping at Efman and Samate Is and at Babo and Sorong are attacked. Dublon and Yap are bombed. HBs hit Vunakanau A/F at Rabaul. HBs, MBs, LBs and ftrs attack a large variety of T/Os on Gazelle Peninsula from Tobera A/F to Rabaul.

6/18/44  FEAF A-20’s, B-25’s, and ftrs, along with RAAF airplanes, continue to pound supplies and occupied areas along coast in Wewak area. B-24’s hit tgts in Truk. A variety of ftr and bmr aircraft unload 18 tons of bombs on numerous tgts around Rabaul. Ftrs continue sweeps against T/Os along coastal areas of Bougainville.

6/25/44  FEAF Wewak area continues under attack of Fifth AF and RAAF aircraft. Personnel areas at But, Dagua, and Suain and barges at Mushu and Kairiru Is are hit. P-40’s and B-24’s strike Kamiri A/F while A20’s, P-47’s, and B-25’s hit villages along Tor R and P-47’s hit tanks along Wiske R. B-24’s pound Yap and Sorol. MBs and ftrs, along with other Allied airplanes, hit AA positions near Wunapope and blast plantations along Wide Bay.

6/26/44  FEAF Wewak area is hit throughout the day by Fifth AF B-24’s and P-39’s, along with US Navy and RAAF airplanes: P-38’s, P-47’s, A-20’s, A-26’s, B-24’s, and B-25’s attack A/Fs, shipping, villages, town areas, roads, and numerous other tgts at Efman, Noemfoor, Japen, and Biak Is, at Manokwari and Ransiki, and near Sarmi. B-24’s bomb tgts on Yap and Sorol Is; others on armed rcn bomb airstrips at Woleai and Peleliu. AAF and other Allied aircraft hit A/Fs, AA positions, and other tgts in Rabaul and Cape Orford areas.

6/27/44  FEAF Fifth AF and RAAF LBs and FBs continue to attack Wewak area, hitting troop concentrations, villages, ammo dumps, and warehouses. B-24’s, B-25’s, A-20’s, A-26’s, P40’s and P-47’s hit A/Fs, gun positions, and various other tgts in or near Babo, Manokwari, Biak I, Noemfoor I, Ransiki, Waren, and Moemi. B-24’s bomb Yap and Sorol; others on photo rcn flight bomb Woleai and Ifalik Is. Thirteenth AF ftrs and bmrs join other Allied airplanes from the N Solomons in bombing AA positions at Ralum and other tgts in Rabaul area.

6/29/44  FEAF Japanese concentrations at Aitape and a variety of T/Os including barges, villages and bivouacs in Wewak area are hit by A-20’s, B-25’s, and FBs. B-24’s, B-25’s, A-20’s, and FBs attack A/Fs and AA guns at Babo, Manokwari, Waren, and Moemi, barges at Noemfoor, and villages E of Maffln Bay. AA positions S of Ralum are bombed.