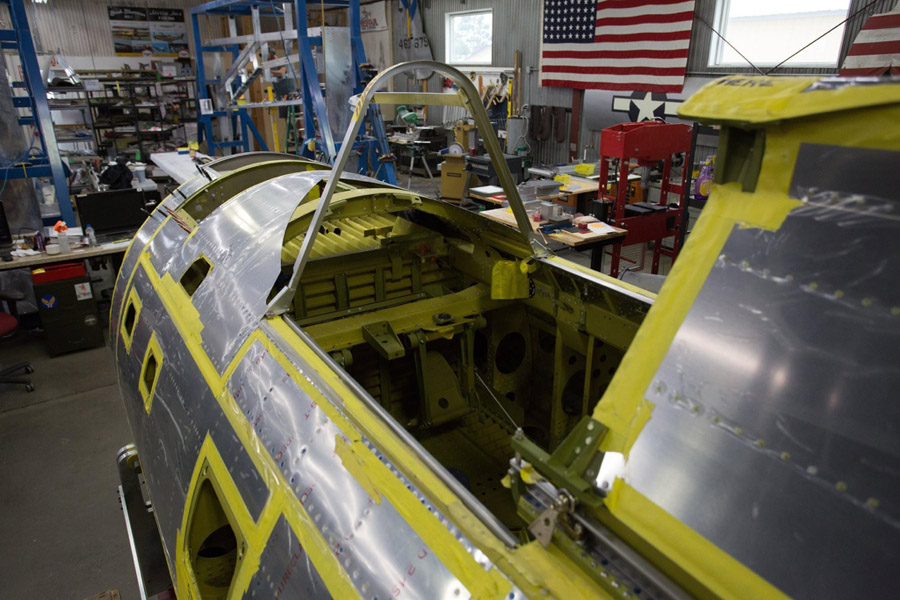 The cockpit area has received its darker green paint. It is a variation on medium green, Shade 42. We will detail how the correct color was determined next month.

Work continued on the fuselage and wings this month. The fuselage was rolled into the paint booth for Dave to paint the cockpit interior.

Also this month, I had the honor of meeting WWII P-40, P-47, and P-51 pilot, Kermit Bjorlie. This month’s history section of our update will detail his interview.

The Window That Isn’t

Behind and under the sliding cockpit enclosure is an oddly named section of aluminum skin, called “rear window” (part number 89F11829). However, it consists of sheet aluminum rather than clear panels. The mystery of the name was solved by examining some photos of very early P-47B prototypes and early production versions. (You will remember that the P-47A is a completely different design, despite the similar name designation). On those early versions there was a clear window in this location, and the name must never have changed to reflect the deletion of the clear panel in later variants.

The wings were also a part of this month’s tasks. Progress here depends on parts flow from the fabrication shop, as well as careful fitting by the restoration guys. 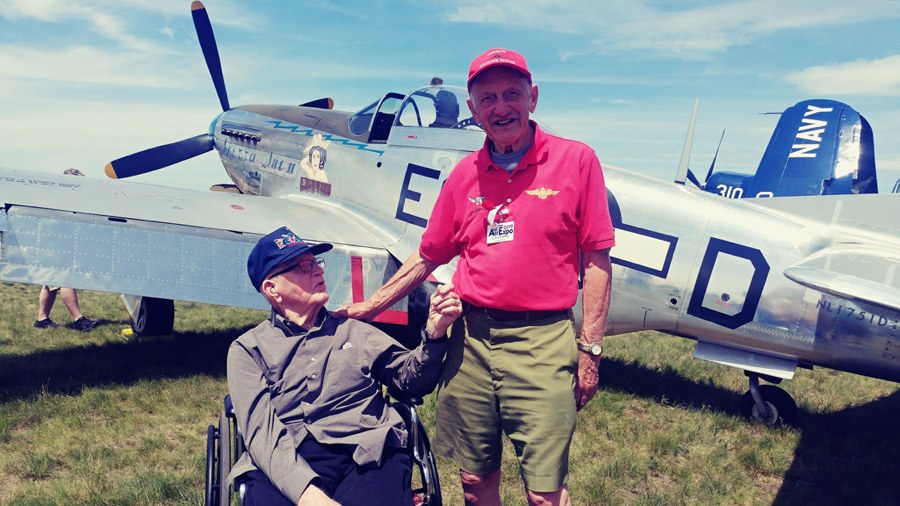 I met Kermit Bjorlie and his son, Jon, at Wings of the North Museum’s AirExpo. The event took place at Flying Cloud Airport in Eden Prairie, MN on Saturday July 13, 2019.

Kermit is 100 years old and a veteran of the Southwest Pacific Theater in WWII. Kermit flew P-40s, P-47s and P-51s during his training and his combat tour.

Bjorlie was born on April 3, 1919,  on a farm in Pekin, North Dakota, about 95 miles northwest of Fargo. Kermit graduated from North Dakota State University with a degree in agricultural engineering. Bjorlie was involved in the ROTC program at NDSU and enlisted in the Army Air Corps in February 1943 after graduating. He served from 1943 to 1946. 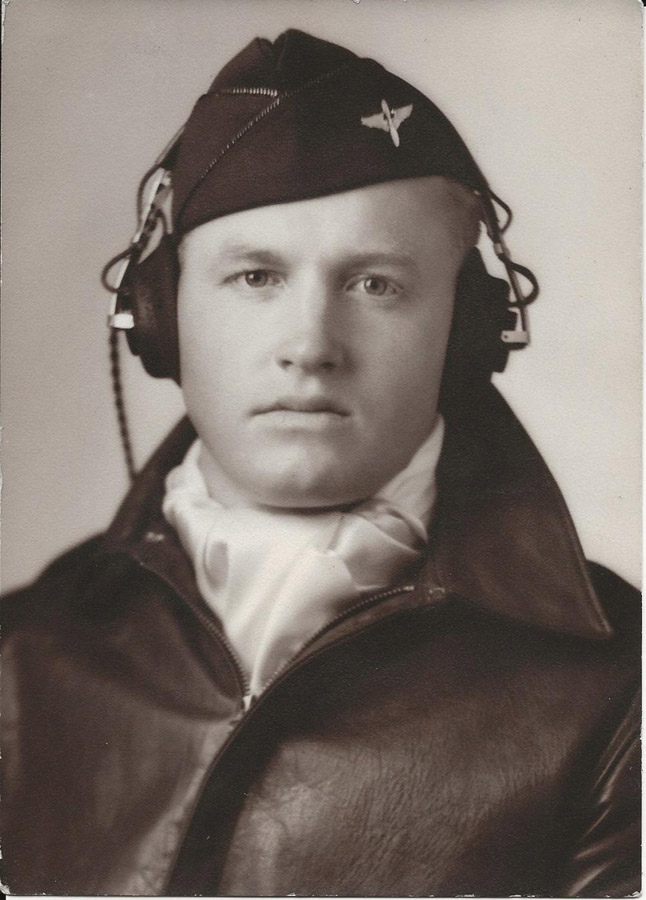 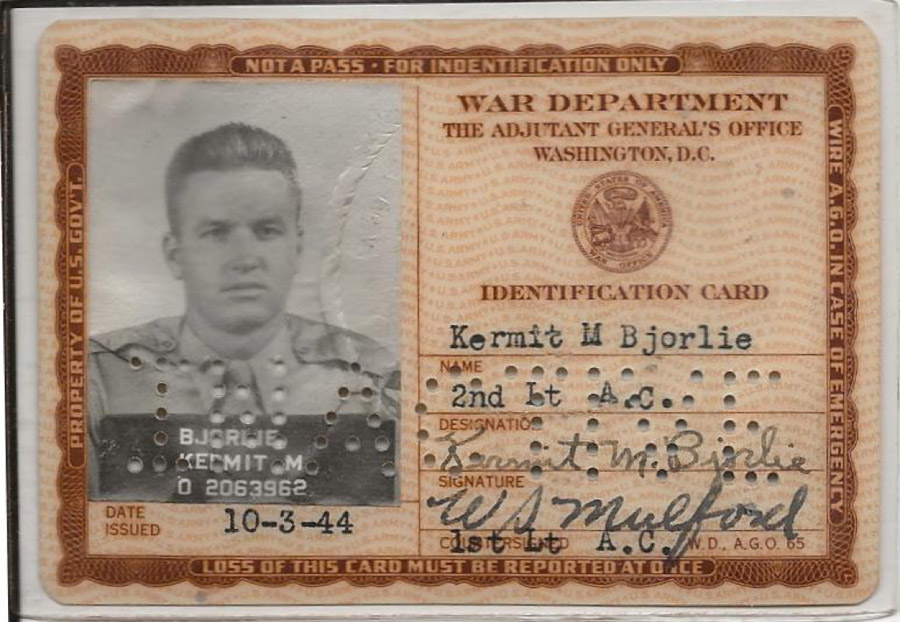 Kermit Bjorlie completed primary, basic, and advanced training in several states, including Michigan, Texas, Louisiana, and New Mexico. A training incident at Fort Sumner Army Air Field, Sumner, New Mexico was one Bjorlie never forgot. In May of 1944, he was playing follow the leader when his flight leader went into a very steep climb. Kermit lost too much airspeed following him and stalled in a nearly vertical attitude. His P-40 fell into an inverted spin, definitely a prohibited maneuver in the Warhawk. Kermit was able to get the nose down enough to break the spin with rudder and he recovered after gaining enough airspeed.

In April, 1945 Second Lieutenant Bjorlie was sent to Nadzab, New Guinea for jungle flight familiarization. Enroute to Hawaii, somewhere over the Pacific, he learned of the death of President Franklin D. Roosevelt. 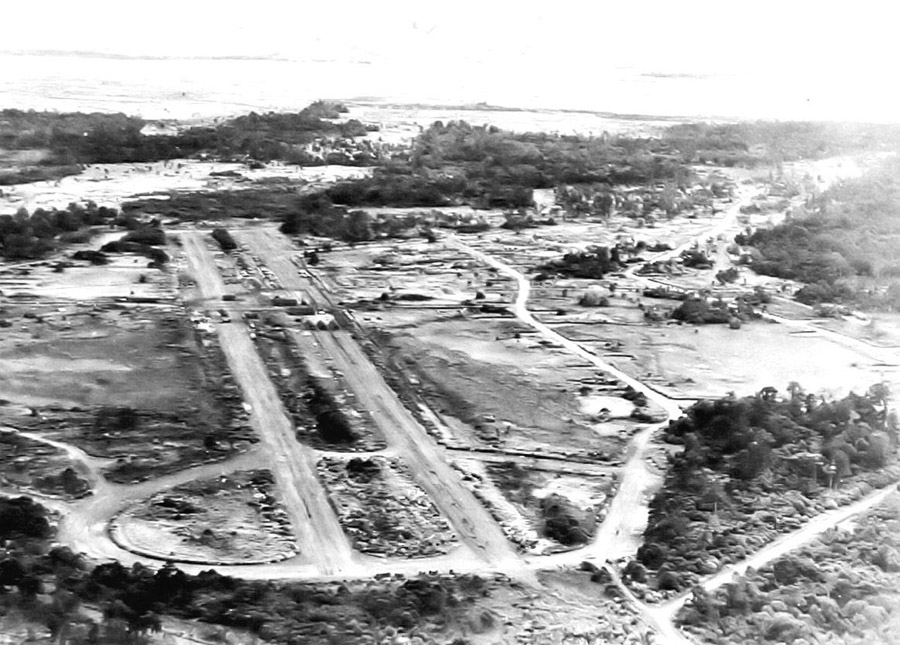 The Nadzab Airfield is located East of Nadzab Village, and was the site of the only Allied paratrooper assault in New Guinea on 5 September, 1943.  The airport is about 26 miles west of Lae.

In the summer of 1944, the New Guinea campaign was rapidly coming to a close and westward movement to the Philippines was on the horizon. The 310th Fighter Squadron moved to Noemfoor, an island on the western end of Papua New Guinea, then on to Leyte in the Philippines, and San Roque Airfield, on 18 November 1944. The nature of the war was island hopping at that stage, and by 22 December, 1944 the 310th was at McGuire Field, Mindoro, Philippines.  On 8 April, 1945 the squadron moved on to Porac Airfield, Luzon, Philippines.

Lt. Bjorlie was assigned to the 310th Fighter Squadron when it was at Porac, and there he flew his first combat missions.

“Flying over jungles and getting acquainted with what we had to put up with moving down.”

His daughter, Carol O’Neill, said he flew the P-47 Thunderbolt with combat missions, giving support to U.S. forces fighting the Japanese in the Cagayan Valley hills.

The war moved closer and closer to the Japanese home islands and Bjorlie and the 310th ended up on the Bolo Strip in Okinawa, flying five- to six-hour missions over southern Japan and looking for “targets of opportunity” 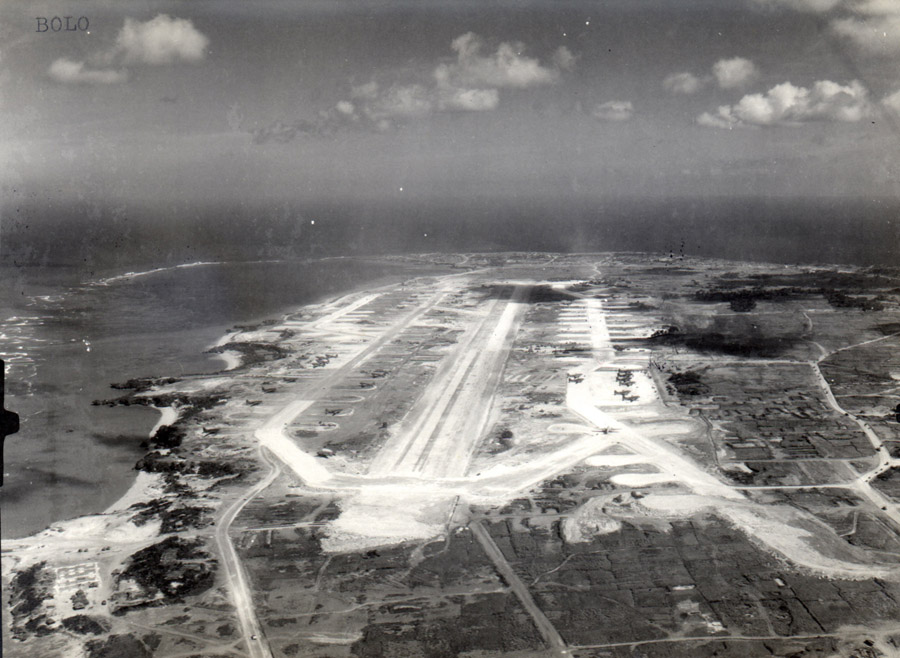 “I wasn’t a part of any major battles, but we had battles all the time,” Bjorlie said in an interview with Grace Zaplatynsk of the Forest City Summit, Forest City, IA.

Bjorlie told me his favorite of the three fighters he flew was the P-47 because it was large, strong, and carried a heavy load of fuel, ammunition, and bombs.  In fact, he credits the P-47 with saving his life. 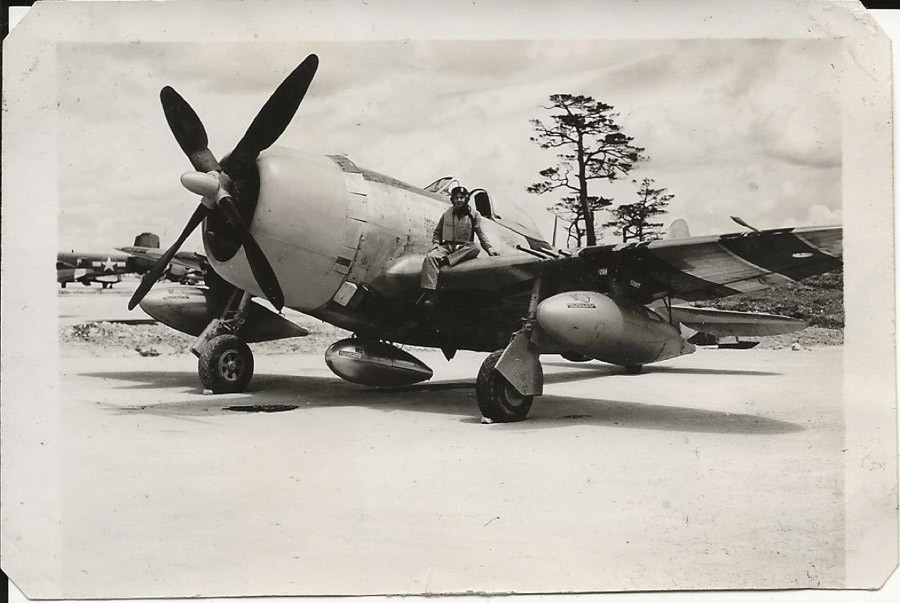 Kermit and one of the P-47s he flew. Photo courtesy of Jon Bjorlie.

Bjorlie recounted flying a mission from Okinawa to Kyushu where he had to attack a Japanese destroyer making fast “S” turns tight against a coastal cliff.

He dived bombed the destroyer and as he pulled out of the dive bombing run, he passed low over the top of the cliff where an enemy anti-aircraft battery was camouflaged in a shack near the cliff’s edge.

Lt. Bjorlie heard the AA fire hit the bottom of the plane and then shortly after, he saw shrapnel holes appear in his wing. He turned and flew back toward the water, not wanting to end up crashing on land occupied by Japanese troops. He figured his odds of survival were better on the ocean and that he might be picked up by the Navy.

As he evaluated the condition of his Thunderbolt, he determined that the self sealing tanks had worked as advertised and the plane was handling normally. He would try to make it back to Okinawa with his squadron mates.

It had to be a great relief to spot his home air base after the long overwater flight in a battle damaged P-47, but he did, and landed successfully.  In his Forest City Summit interview, Kermit also mentioned “I never did see the airplane again. I think it was taken into the repair depot because it had too much damage.”  He observed that this was his closest call in his military flying career.

On Okinawa, Kermit recalled surviving the typhoon that bombarded the Third Fleet with 50- to 60-foot seas, sustained winds of about 115 mph, and gusts probably up to about 150 mph on June 2 and 3, 1945 east of Okinawa. This typhoon damaged 33 ships and destroyed 76 airplanes, mostly on the flight or hanger decks of aircraft carriers after the airplanes broke free of the chains holding them down.

Lt. Bjorlie weathered the typhoon in a Japanese cemetery under half a tent (shelter half) spread over and tied down to the urns in the cemetery.  He said the planes tied down at the airfield were lifting off and “flying” on their tie downs.

As Kermit recounted his war time flying career, he got a bit emotional as he told me that one of the saddest days of the war was when he was part of a ferry flight to take the 310th’s war weary P-47s to Clark Field. On the way, the squadron hit towering cumulus clouds and had to “climb to daylight”. Turning in the beloved Thunderbolt was a hard thing for Kermit. 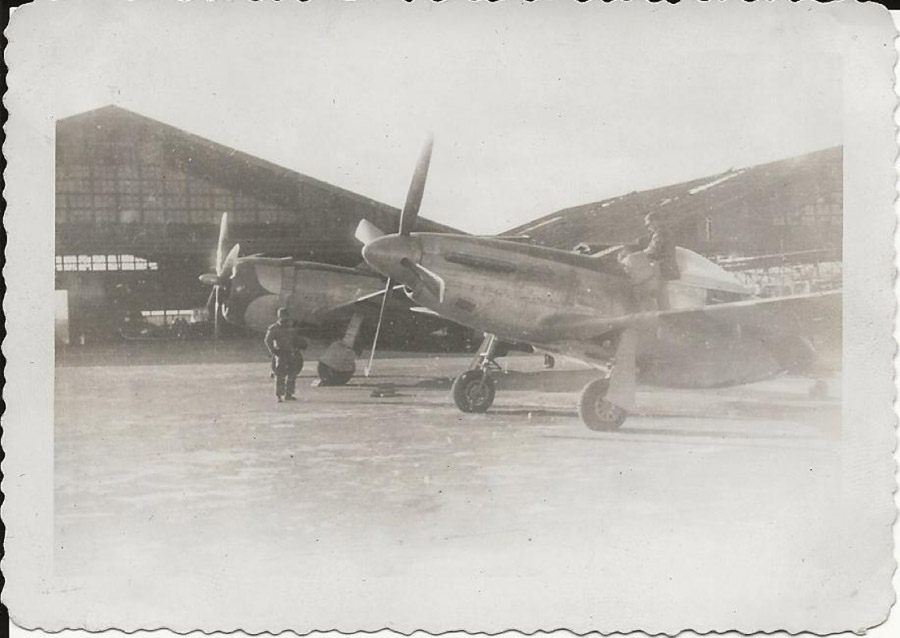 P-47 and P-51, probably at Clark Field, the Philippines in March of 1945, photo courtesy of Jon Bjorlie

The 310th squadron flew the P-51D for the remainder of the war, and after Okinawa, were moved to Irumagawa Air Base northwest of Tokyo for the occupation, where Bjorlie also flew the P-51 Mustang.

In 1947, Kermit married Ruth Lewis, a USO volunteer who he had met at a USO dance during training at Waco Army Airfield in Texas.

They made and lived in their home in Forest City, Iowa until 1966 and then moved to Zumbrota, Minnesota where Kermit currently lives in a nursing home.