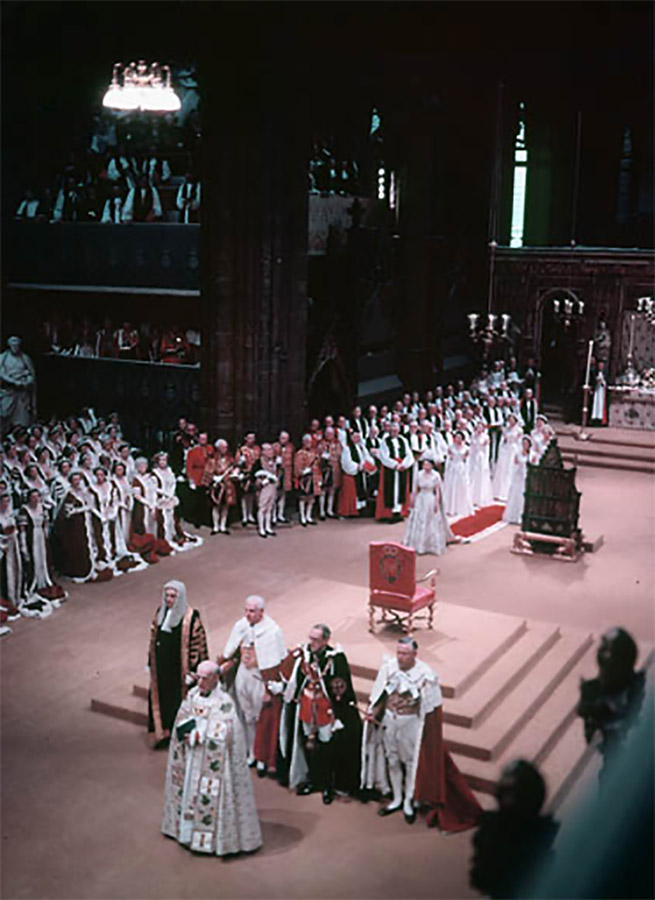 The biggest event in world news during June of 1953 was the coronation of Queen Elizabeth II. The crowning of a new United Kingdom monarch has always been an historical and newsworthy event, but in 1953, for the first time, it was possible to televise a coronation ceremony. Remarkably, Thunderbird/Mr. Alex had a part in the unprecedented coverage of the coronation.

While there was great popular excitement at seeing the coronation on live television, there was also political controversy over allowing the BBC to show the ceremony. Traditionalists, like Prime Minister Winston Churchill and the Queen Mother, were opposed. However, when their decision to forbid TV coverage was leaked by the BBC, it became clear that a vast majority of the British general public favored coverage. This public pressure resulted in a go-ahead for the British network to cover the event live on June 2, 1953.

Unfortunately, North American television networks didn’t have the same option for live coverage.
In fact, covering a breaking international news event happening overseas was the largest challenge that the television industry had faced up until this time. While it was theoretically possible to transmit directly across the Atlantic through underwater cables, it would require pre-empting every existing cable at the prohibitive cost of 40 million dollars.1

Since videotape and satellites didn’t exist in 1953, the only viable option American and Canadian networks had was to physically transport film of the coronation to broadcasting facilities within the US.

As is the case with all breaking news, the networks compete to be first. This competition evolved into the “Great Coronation Race”. A variety of plans for scooping competing networks were proposed; NBC explored chartering the revolutionary new Comet jetliner from BOAC airlines to fly the film to the US. However, three disastrous crashes of the Comet within a year eliminated any interest in that option.

Canadian Broadcasting Company’s (CBC) arranged for the BBC kinescope film to be flown from London to Goose Bay, Labrador in an RAF Canberra jet. CBS and NBC managed to obtain space in the same Canberra for their separately made films. 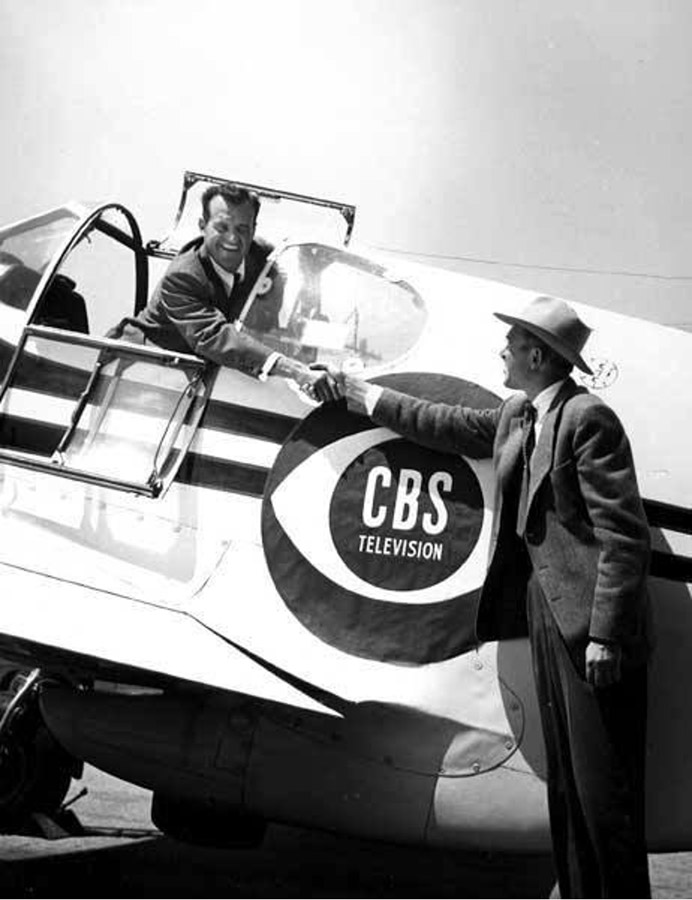 Joe DeBona(cockpit) shakes hands with Jimmy Stewart in a publicity shot showing the CBS logo. This logo was removed for the actual mission and smaller versions were carried on the fuselage and tail. Photo from Eyes of a Generation website https://eyesofageneration.com/june-2-1953-elizabeth-crowned-nbc-cbs-race-footage-to-usit-was-61-years-a/

The CBC film would be transferred from the RAF Canberra to an RCAF jet for delivery to Montreal and subsequent broadcast, so the two US networks needed a way to get the kinescope film from Goose Bay to broadcasting facilities in Boston. Boston was the closest transmission point with the ability to feed the entire country for both networks.

This is where Thunderbird/Mr. Alex comes into the story. The two networks set up a race. CBS hired Joe DeBona, flying Thunderbird, and NBC hired arch-rival Paul Mantz’s red P-51. The Mantz Mustang was flown by Stan Reaver, who had finished second to DeBona in the 1949 Bendix and vowed not to let that happen again.

At the time Thunderbird had been repainted as Mr. Alex, and it was owned by Jimmy Stewart, (who just happened to own an interest in a CBS affiliate TV station). The “Mr. Alex” moniker was in honor of Alexander Maitland Stewart, Jimmy Stewart’s father.

Both Mustangs were to pick up the film footage from the RAF Canberra in Goose Bay and race to carry the film from Goose Bay to Boston. 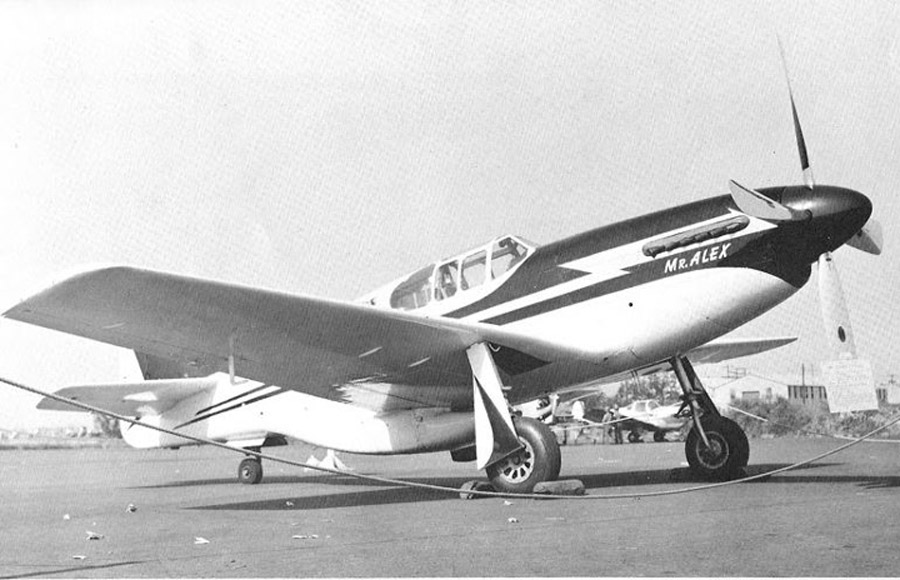 Mr. Alex on the ramp at an airshow, location and photographer unknown

When coronation day finally arrived, the kinescope film was shot, then loaded onto an RAF Canberra. The British jet made the crossing and was on the ramp in Goose Bay with the film by 1:45pm on June 2nd. DeBona and Reaver rushed to get their film reels and stow them in their respective aircraft.

As the realization dawned that Reaver and the NBC film would arrive after DeBona, an NBC executive approached ABC management with a new solution. ABC had already struck a deal to pay the Canadian Broadcasting Corporation (CBC) for access to their coverage of the coronation, and NBC was now willing to pay any amount so that they could also share the broadcast.

A deal was struck, and just moments before 4:00 pm (less than 15 minutes before DeBona landed in Boston), both NBC and ABC switched their feed to CBC coverage from Ottawa. As DeBona covered the last few miles to Boston’s Logan Airport carrying the CBS film, the NBC executives were dismayed to see that the CBC coverage was broadcasting the Canadian celebration ceremonies, instead of the events from London. 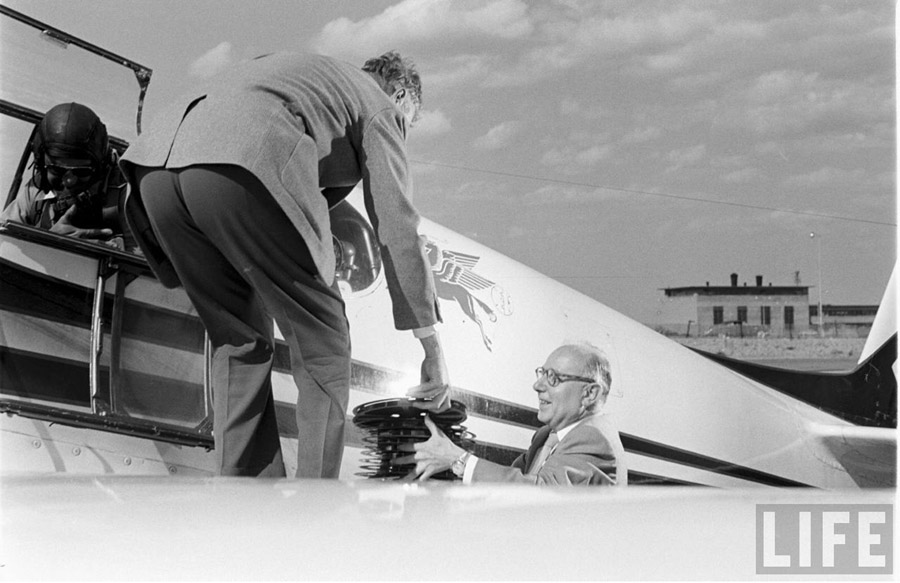 DeBona touched down in Boston at 4:13, taxied to the ramp, and handed the film over to CBS executives who rushed to the broadcast booth to get the film on the air as soon as humanly possible. However, four minutes later at 4:17pm, CBC switched to the Montreal feed that showed the London coverage of the coronation. This meant that both NBC and ABC were able to beat the CBS coverage by several minutes, without needing the film brought by Reaver a mere 20 minutes later.

So while CBS won the much vaunted air race, NBC and ABC were able to air Coronation coverage first. CBS went on the air with their own coverage at 4:23 and could claim to be the only network to run an edited version that they produced themselves.

The race did a great deal to promote television by enabling the same day broadcast of a distant world event. It provided an opportunity for millions to share a cultural event. According to Alice Rizzo, writing for Reuters in 2018,

“It’s also been widely viewed as the moment that changed the future of television.”

Six months prior to the coronation, in January of 1953, Jackie Cochran had sold Thunderbird back to Jimmy Stewart. Jimmy applied to the CAA for a variance to the restrictions on the registration limiting Thunderbird to flight within the continental United States. This was granted to enable the Coronation film flight from Goose Bay to Boston. The restriction was reinstated after the trip.

As the Mustang was prepared for the Coronation race, it was repainted and named Mr. Alex in honor of James Stewart’s father, Alexander Maitland Stewart.

Mr. Alex has been portrayed in artist’s renderings in various colors; sometimes black and yellow, one description said black and white, and the most common description was blue and white with a red spinner. Without a color photo, it is difficult to prove which colors are correct, but the best contemporary evidence indicates that it was blue and silver with a red spinner. This color scheme was described by an unnamed newspaper reporter who saw Mr. Alex at Meacham Field in Fort Worth, Texas.2 Black and white photos do appear to show the lighter areas as white, but black and whites of known silver Mustangs look like that as well. Hopefully, a color image will be found that settles the question once and for all.

On March 31, 1954, the final notable event in Thunderbird/Mr. Alex’s career with Joe DeBona and Jimmy Stewart was a new non-stop transcontinental record of 4 hours, 24 minutes, and 17 seconds from Los Angeles International airport to Idyllwild Airport in New York. DeBona’s average ground speed was just over 561 miles per hour! This record still stands for west to east prop-driven aircraft.

Cook installed silver iodide burners for use in suppressing hail storms in western Nebraska. He had earlier used a P-40 for this purpose, which was damaged in August of 1954, necessitating the purchase of another suitable plane for his hail suppression business.

On August 15, 1955 registration of N5528N was cancelled due to an accident. Contemporary news accounts quote James Cook as saying that one wheel locked in the up position and one locked down. Cook struggled to get the gear problem corrected for an hour and 40 minutes but couldn’t rectify the problem despite advice over the radio from several P-51 experts. Cook survived by bailing out successfully.

The wings received most of the restoration time this month, mainly the aileron linkage and the landing gear actuating system. 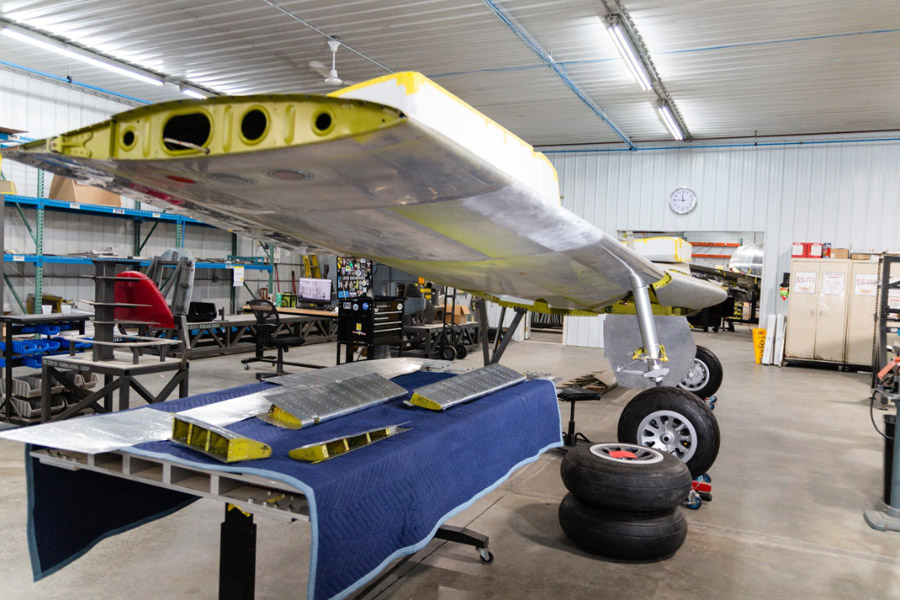 Thunderbird’s D model wings are on the main gear and a jack for easy movement and access as restoration continues. 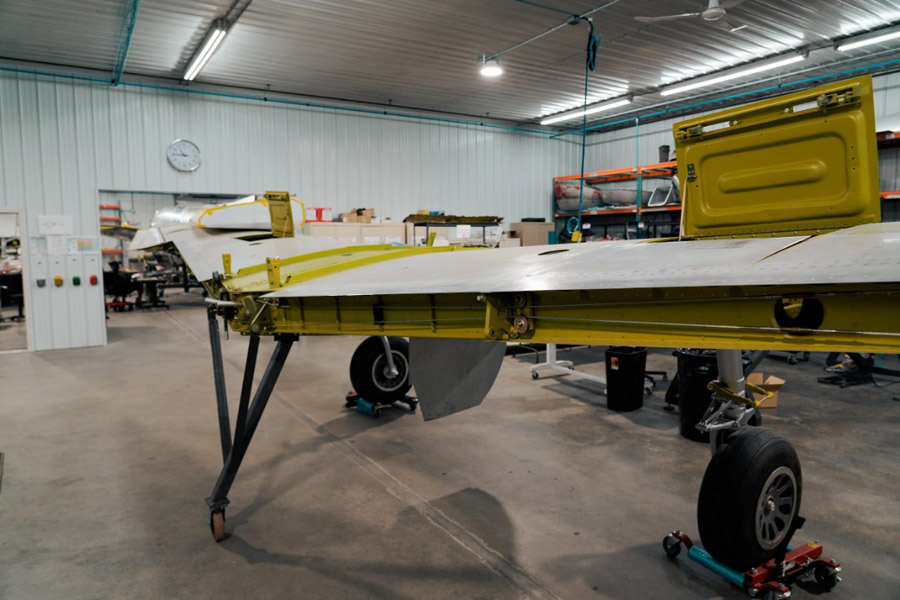 The wheeled jack supporting the trailing edge is visible here.

The aileron control linkages have been completed as wing progress continues. 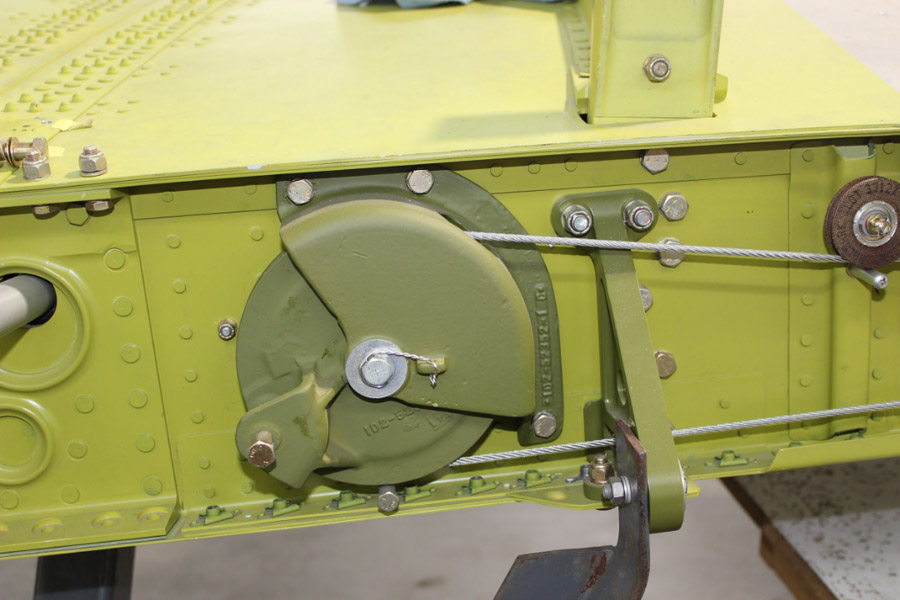 The aileron control linkage is installed. This is the inner pulley on the right wing. 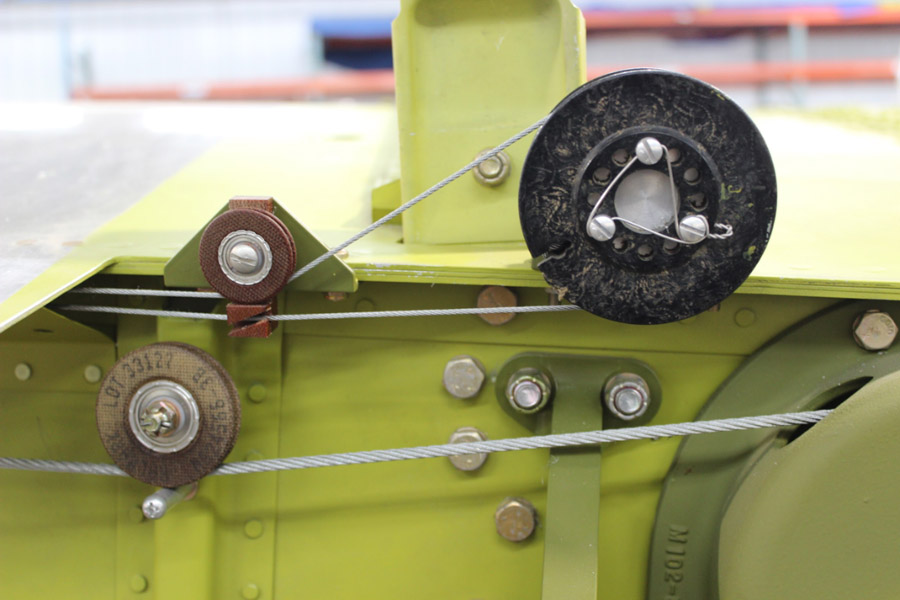 The large dark-colored pulley is the aileron trim drum. 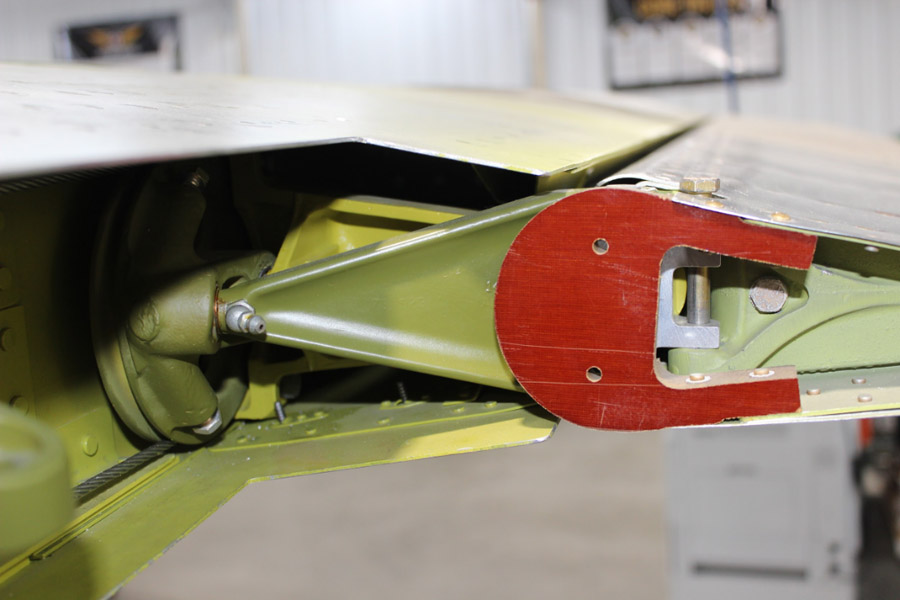 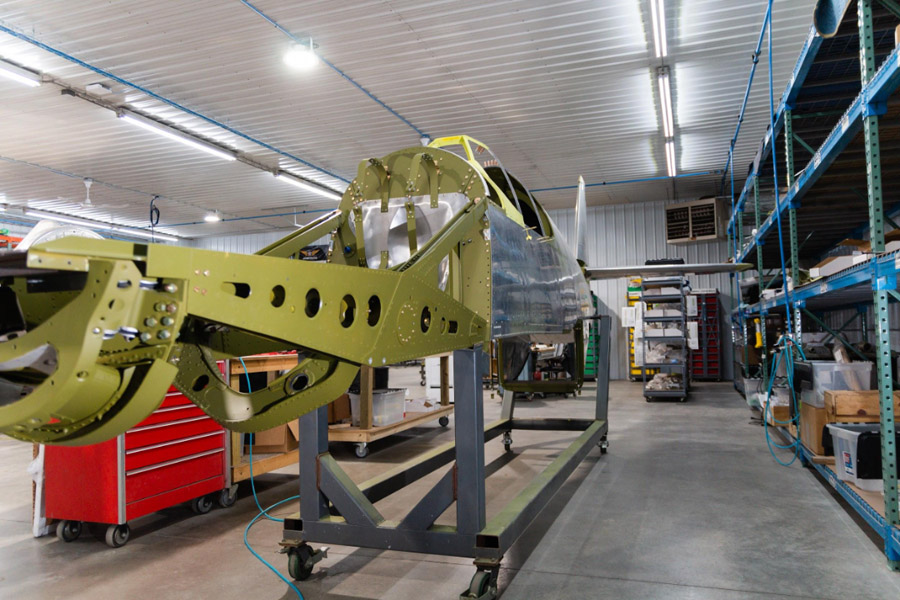 Engine mounts and some lower cowl formers are in place. 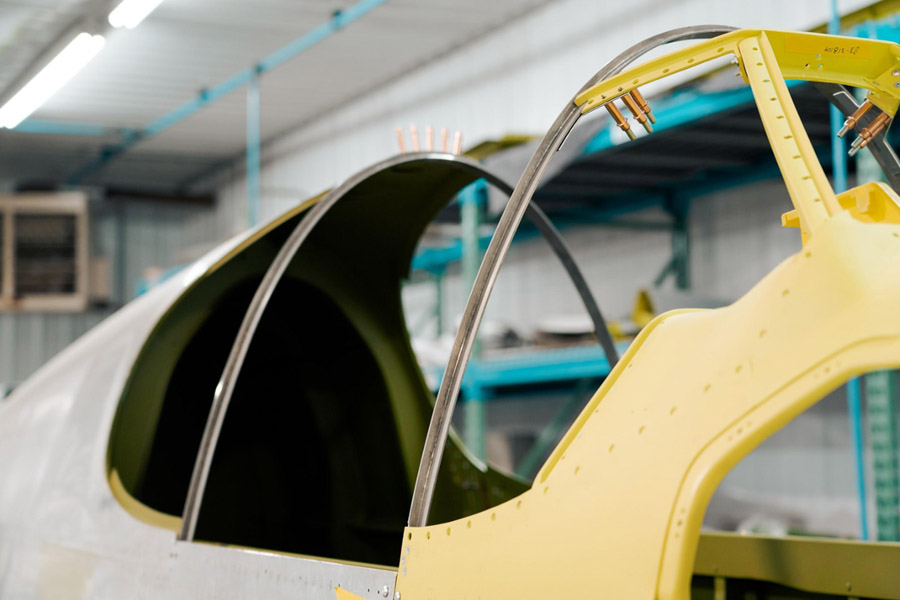 Work on the windshield and cockpit enclosure continues. 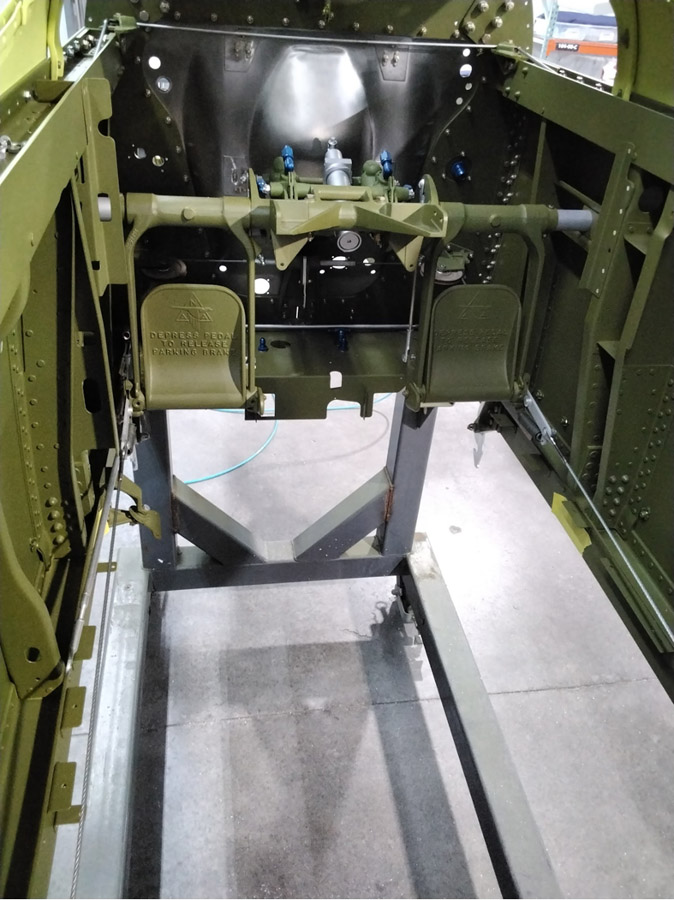 The rudder pedals are in place. 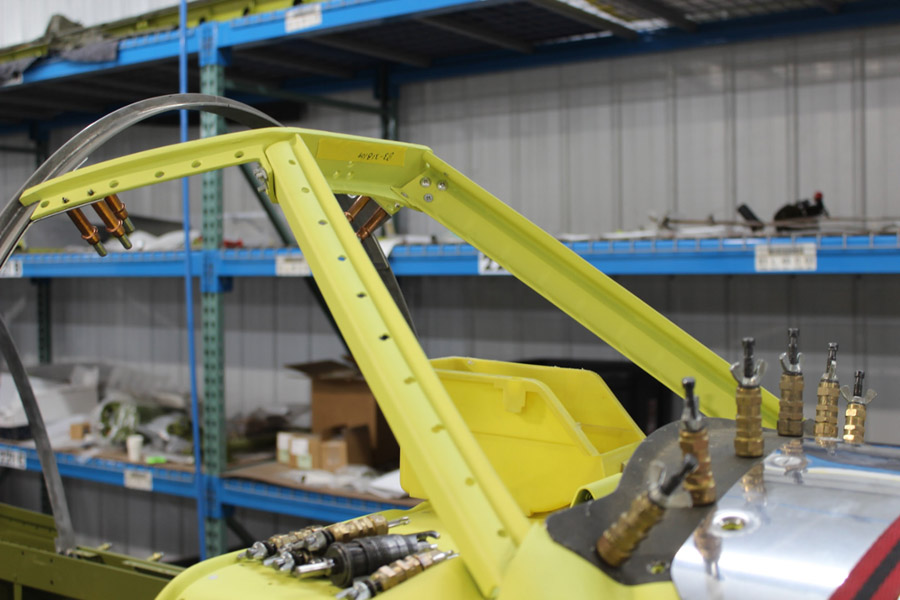 The windscreen assembly is being prepared for the glass installation. 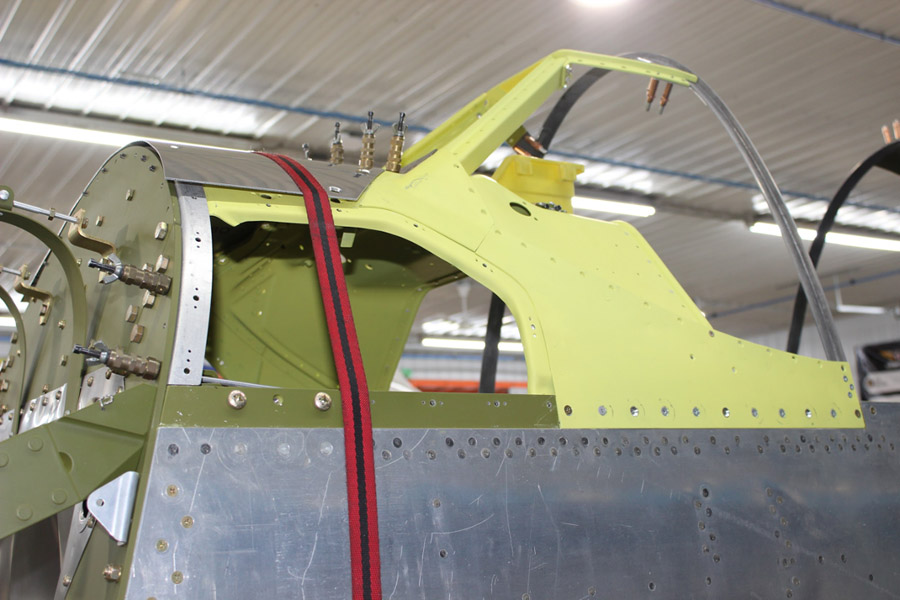 Another angle shows the left side of the windscreen assembly. 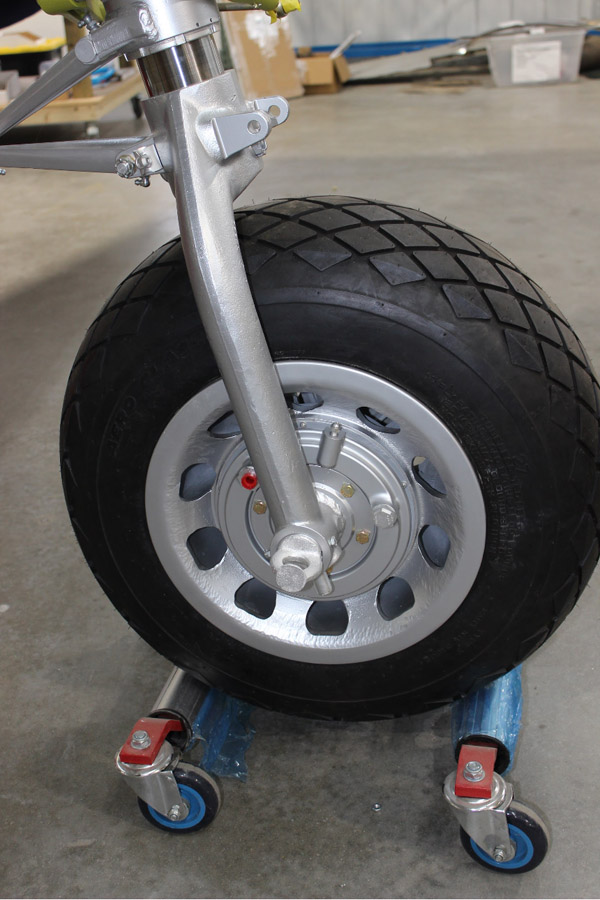 The wheels and brakes are finished. 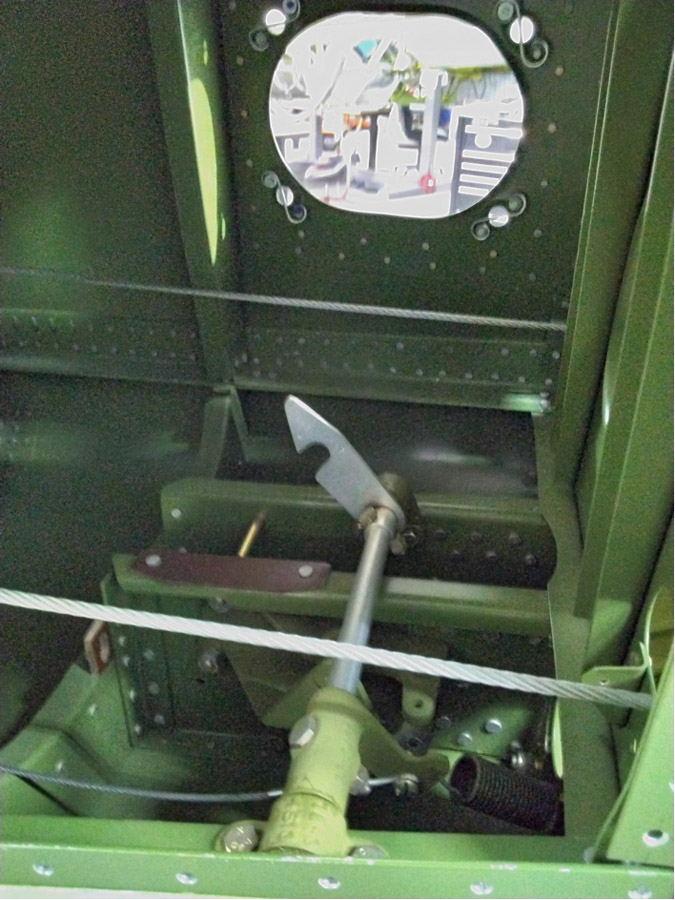 The tailwheel uplock hook is shown through an open inspection panel. 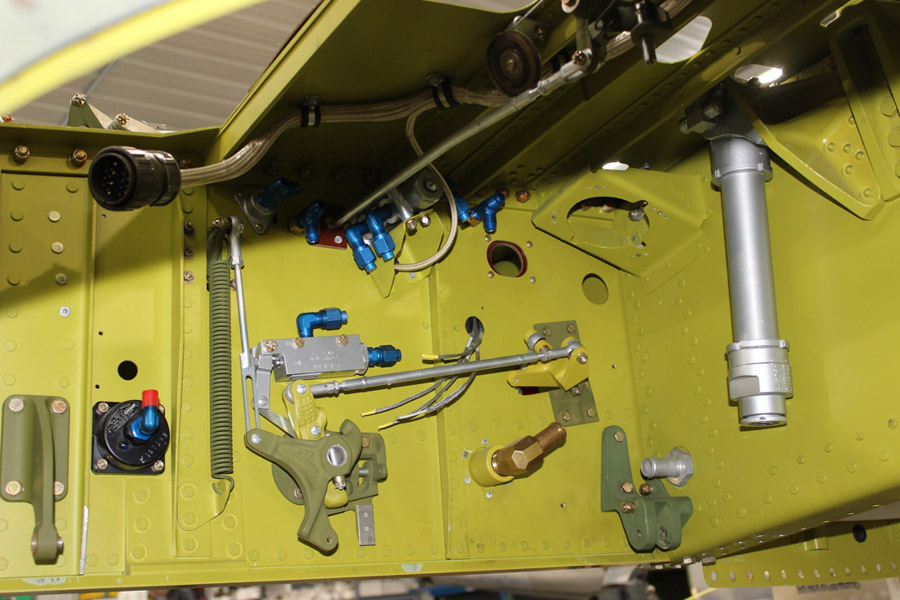 Mark Tisler has completed much of the work on the landing gear operating parts in the wheel wells. 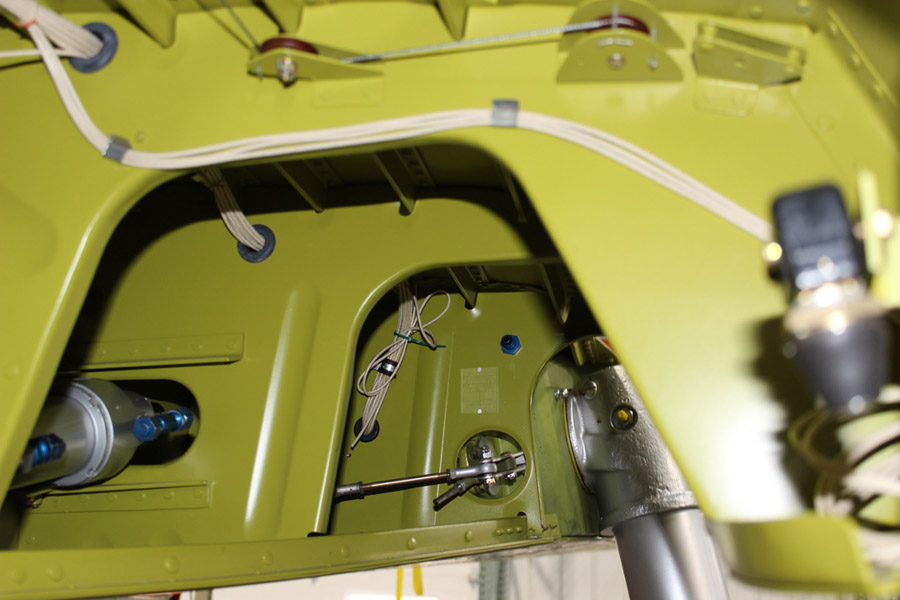 Visible in the lower center of this image is the end of the landing gear down lockpin. 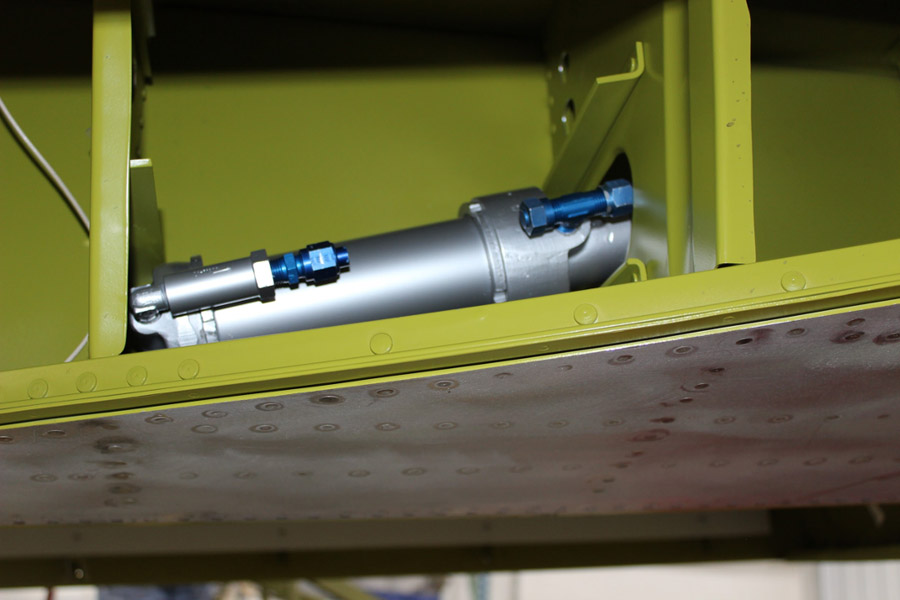 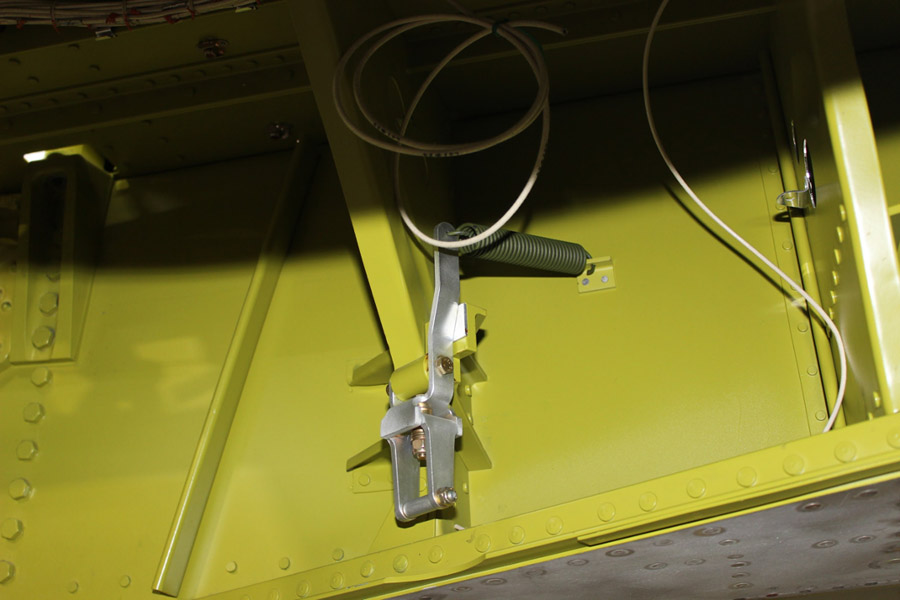 This is the landing gear fairing door lock. 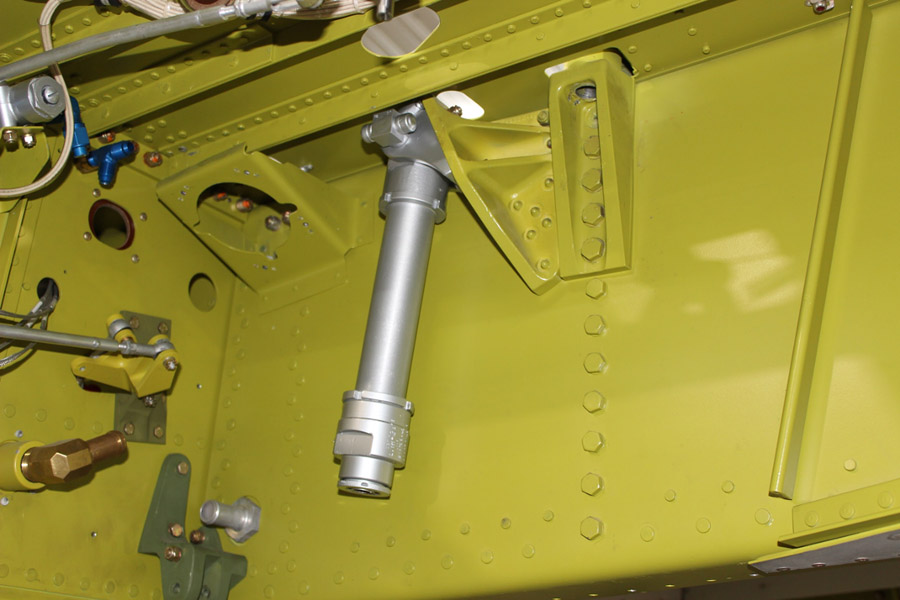 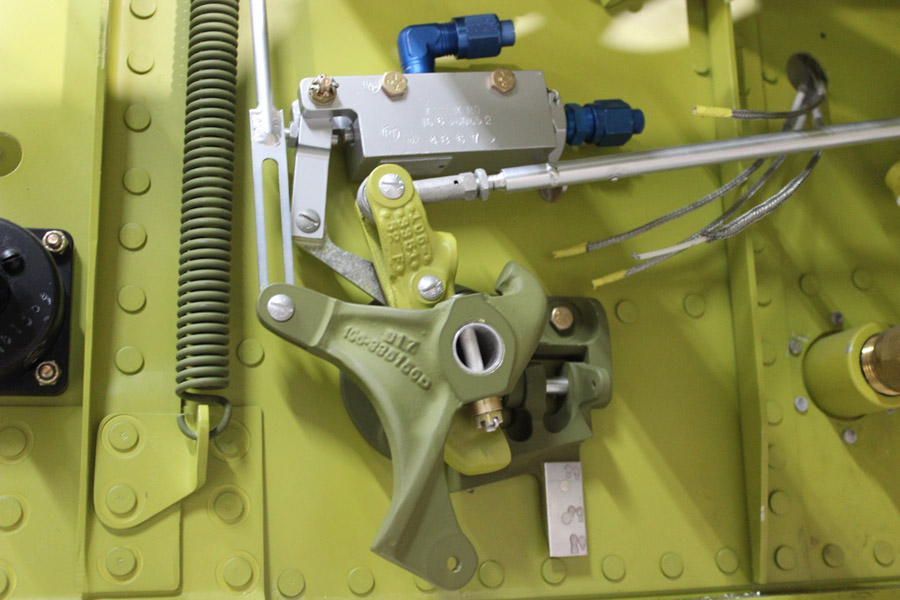 In the right wheel well, the darker green part is the bell crank attached to the landing gear torque tube, above it with the blue elbow fittings is the valve assembly - landing gear up controllable check complete. A red knob below the pilot’s panel connects to the torque tube via a rod linkage and to a hydraulic release valve. Pulling this knob exhausts all pressure in the landing gear hydraulic system, and also retracts the fairing door up-latch hooks by actuating the torque tube. 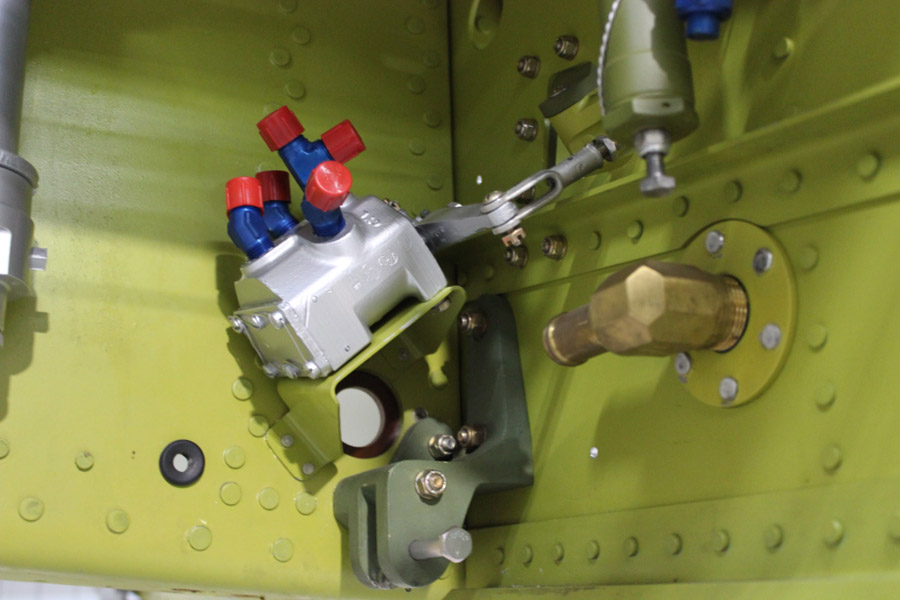 The silver component is the landing gear selector valve.