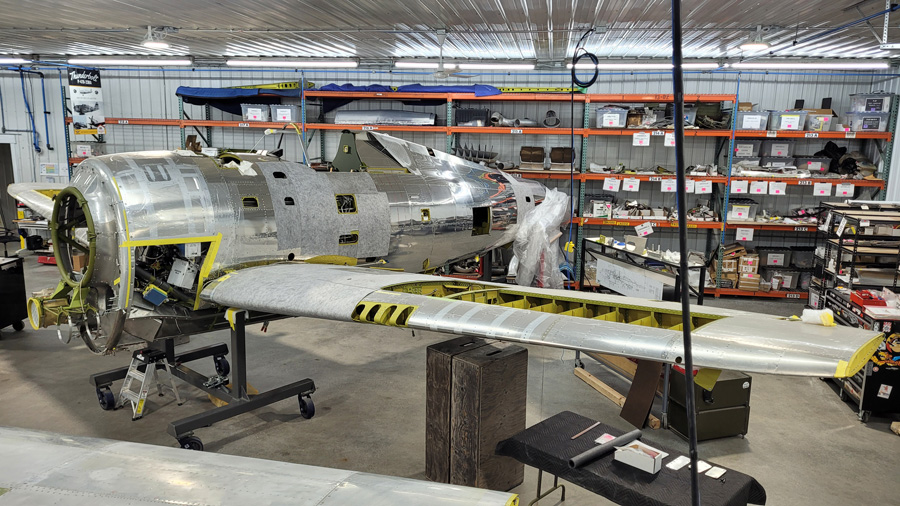 The sheer size of the P-47 is clear when you compare it to the work table under the airframe.

Systems work continues on the fuselage. 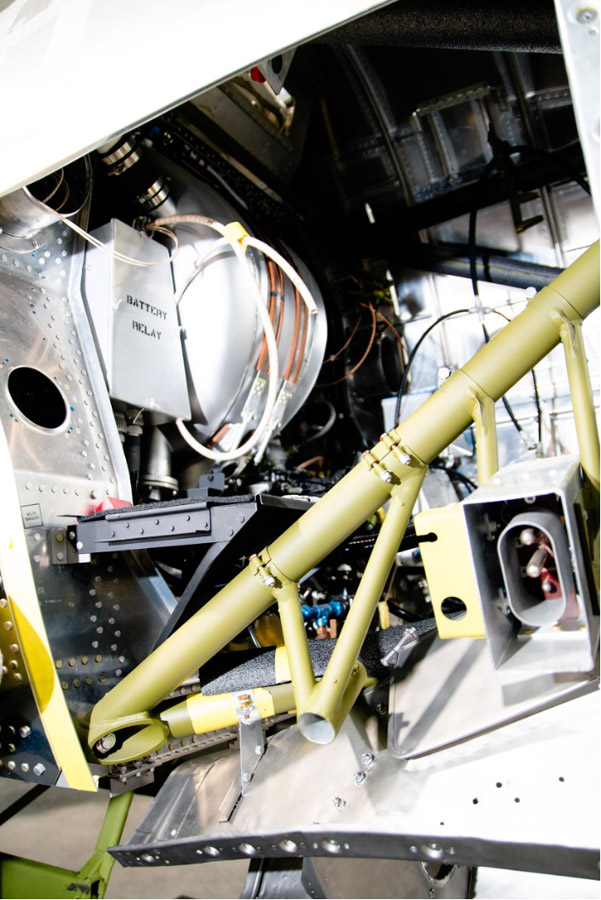 The black shelf, left center of the image, is where the battery will be mounted. The part of the motor mount with an open tube in the lower center is where the hand starter crank will go. Imagine hand cranking 2800 cubic inches of Pratt and Whitney radial! 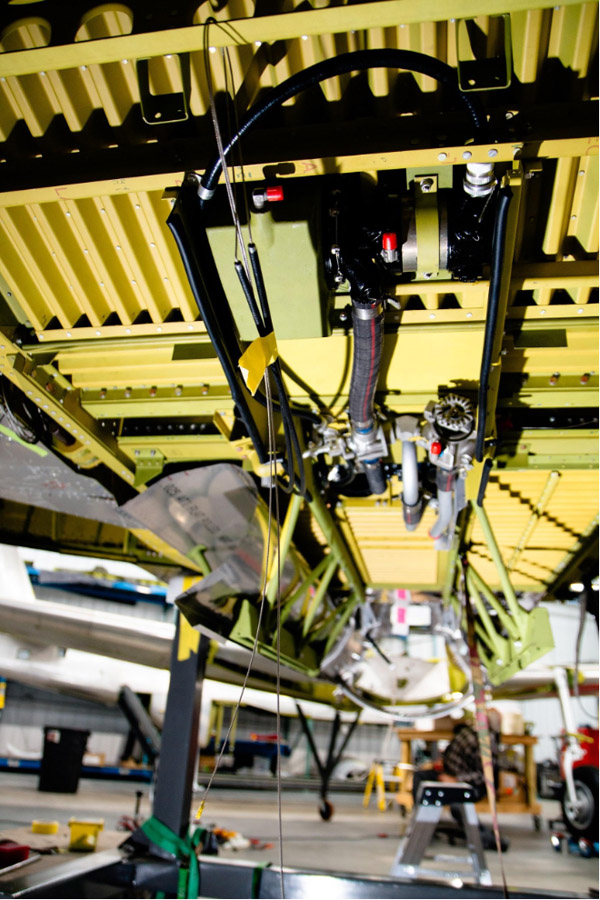 This is a view from under the auxiliary tank of some of the fuel system plumbing and components. At upper right, with the zinc chromate colored strap around it, is the auxiliary tank fuel boost pump. Below that, in the right center of the image, is the fuel strainer (it has what looks like a faucet handle on it). Just left of that with the large black hose connected to both ends, is the main fuel selector. The drop tank selector is also installed, but it is buried above the main selector and isn’t visible.

In any restoration, the various assemblies are put together with clecos, skins are fitted and drilled, then the assembly is taken apart for painting, deburring the rivet holes, and any other needed adjustments. Finally, the parts are actually riveted together to complete the component. The ailerons have reached the final riveting stage this month. 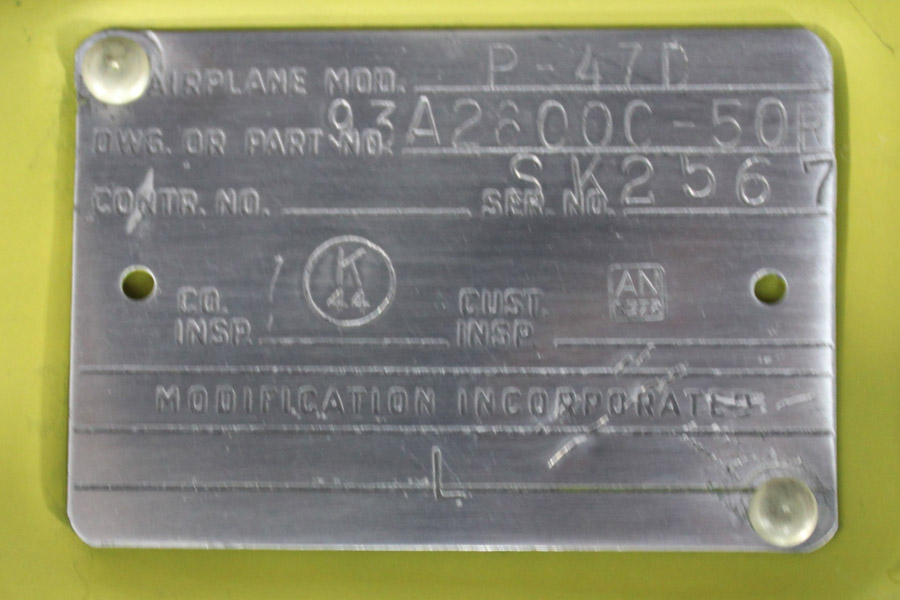 These assembly data plates are original and will be used in the restoration. 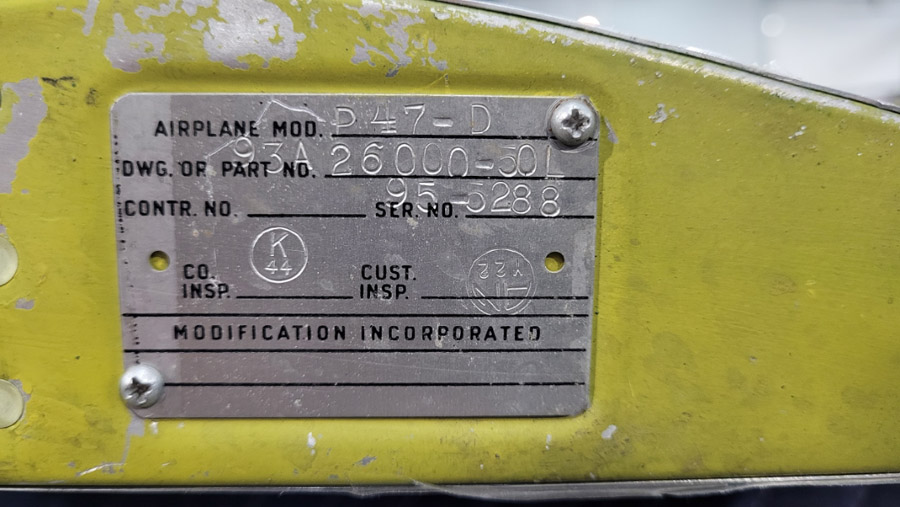 It is interesting to see the variation in the plates. This one was printed and the other stamped. 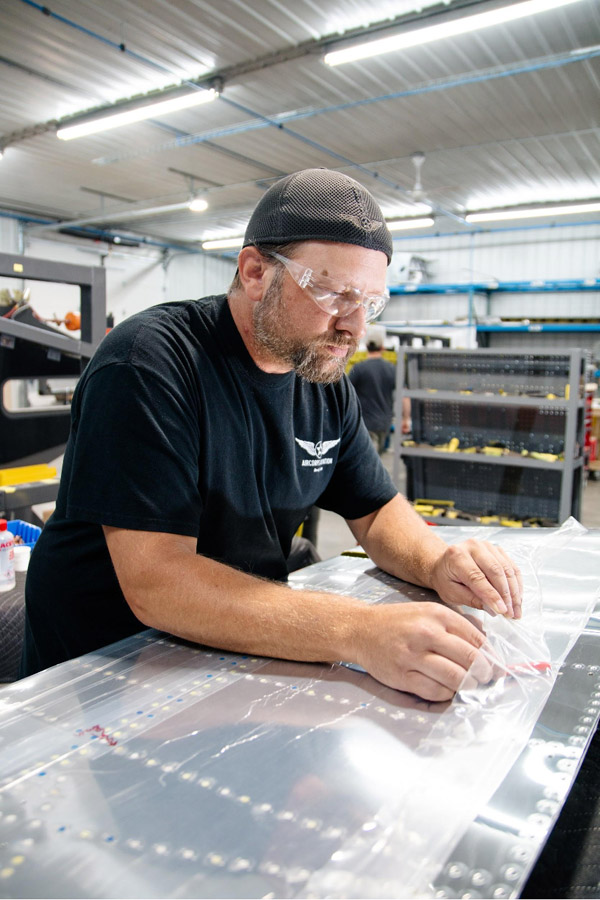 Brad works on an aileron. 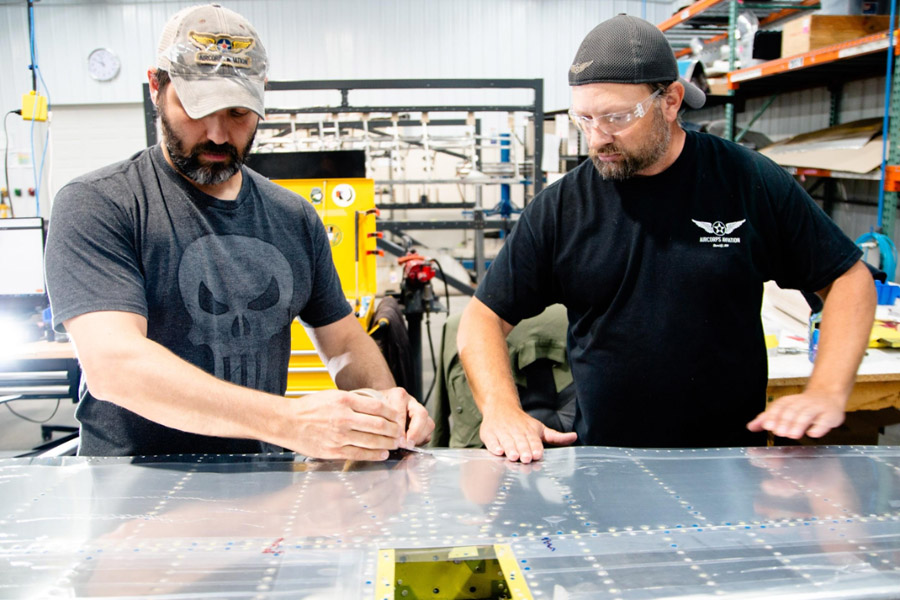 Randy and Brad fit one of the aileron skins. 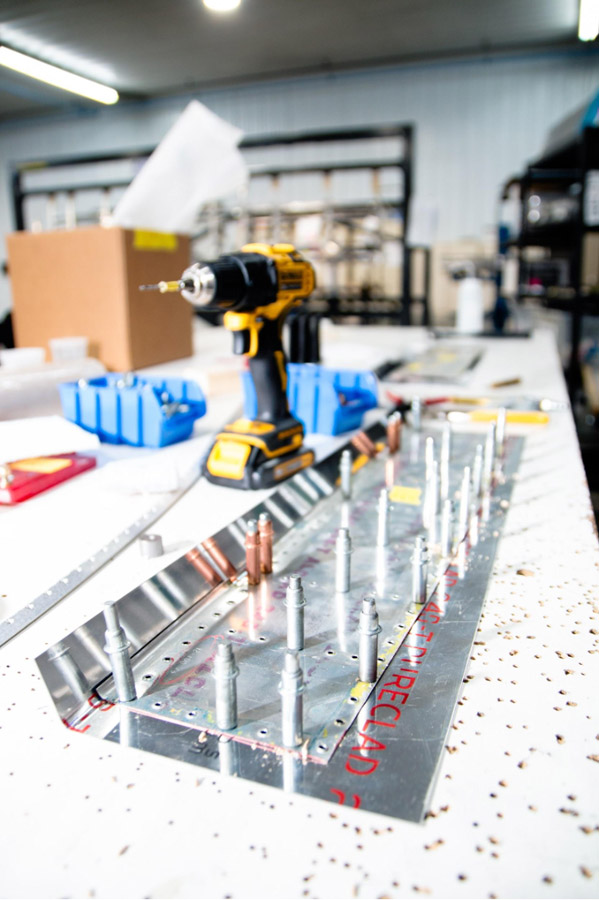 This is the skin for the right wing aileron trim tab. 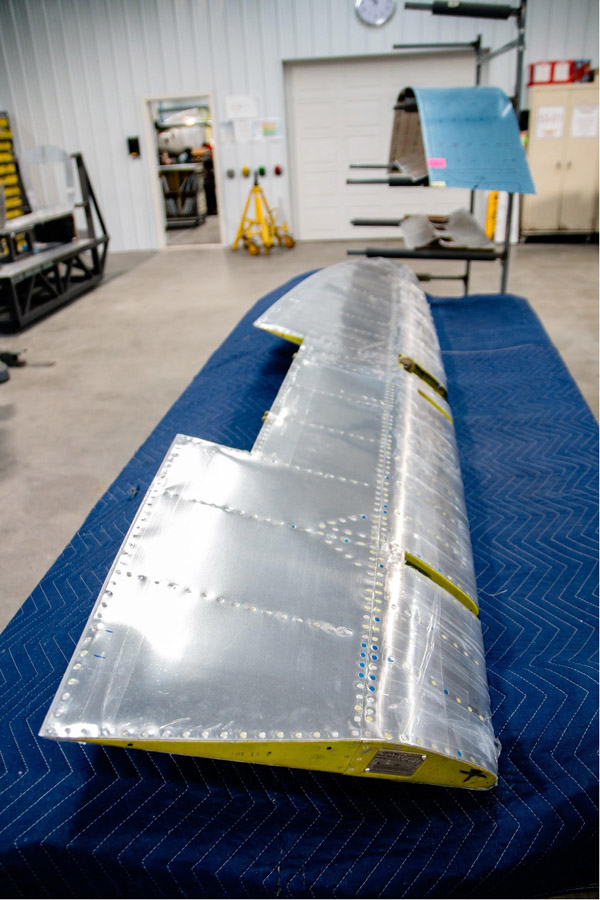 The opening for the trim tab can be seen in this nearly completed aileron. 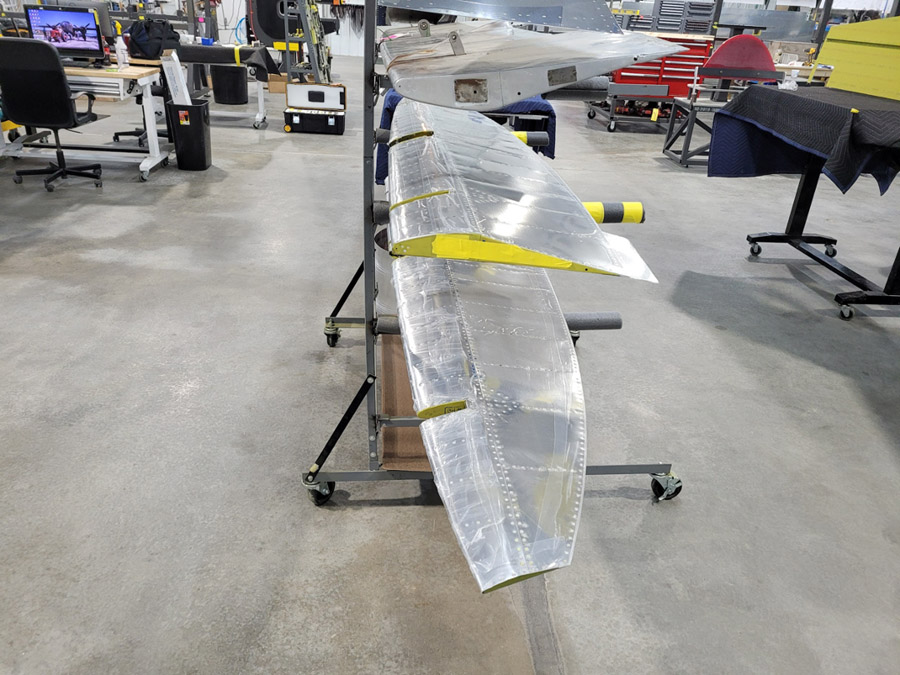 The ailerons rest on a rack, complete except for the trim tabs. 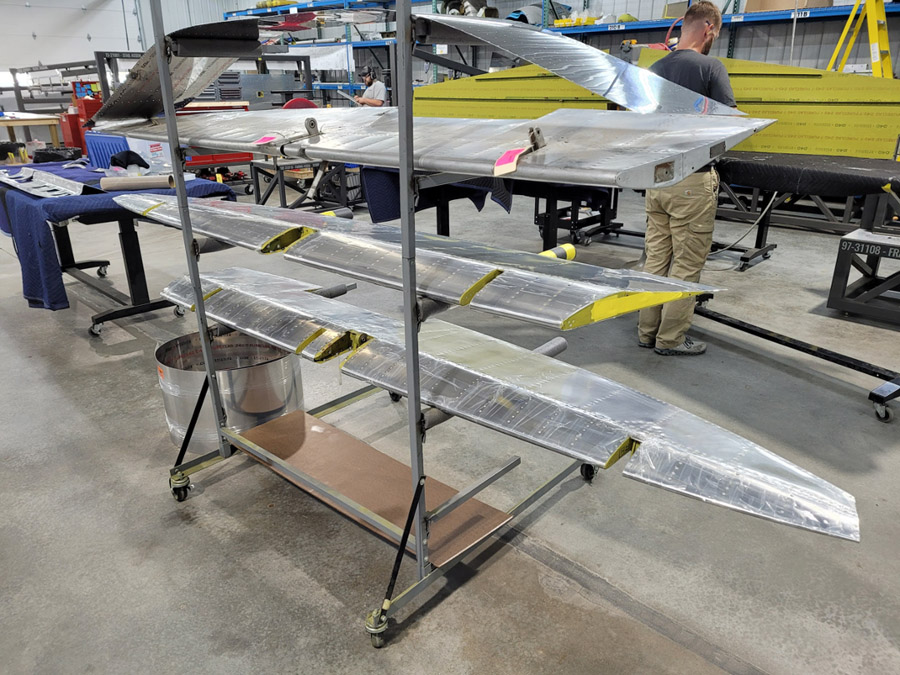 The lower two ailerons are the restored components, the upper one is a spare used for comparison.

The landing gear on the P-47 is massive, as befits such a large fighter. Most of the work restoring the gear has been completed. 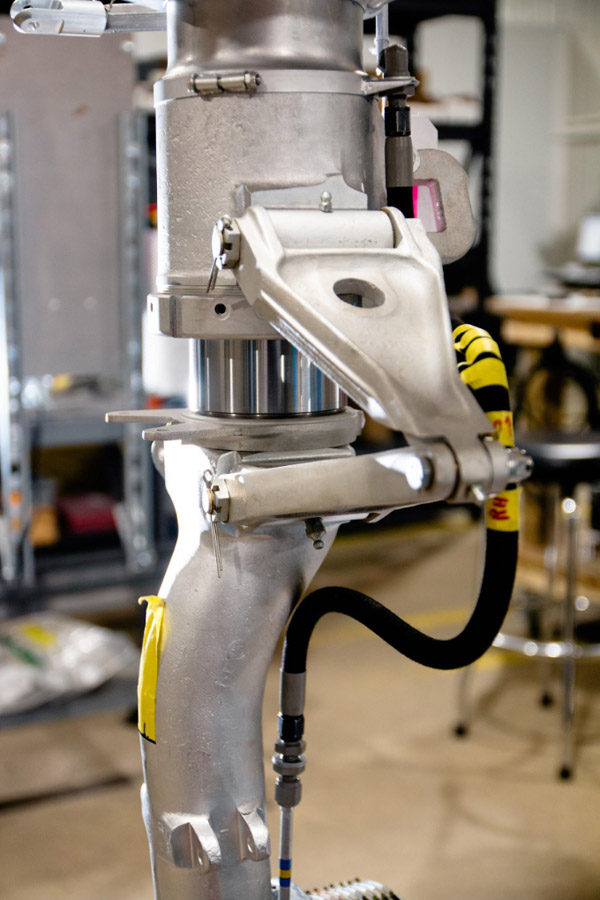 The scissors on the main gear keep the wheel aligned as the the gear telescopes up and down. 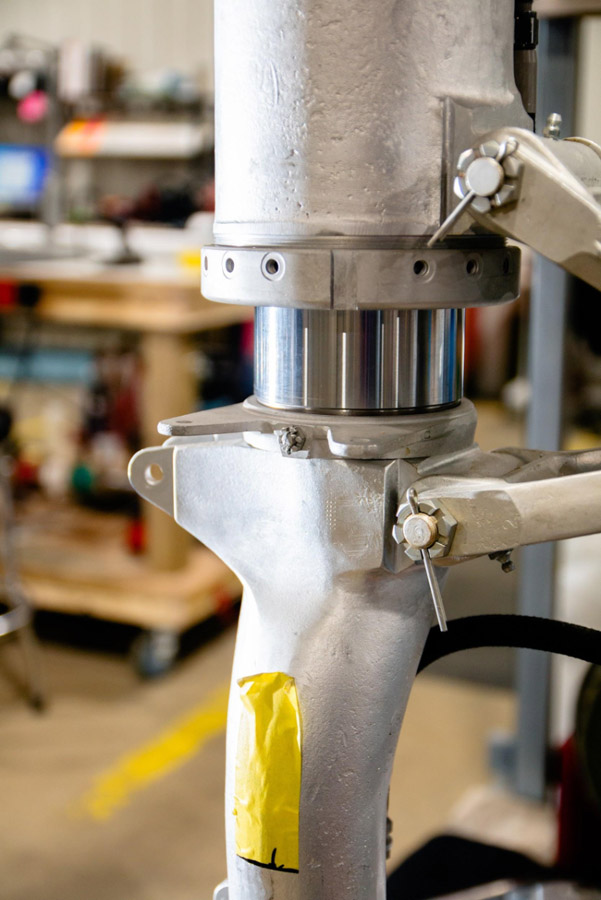 The “ears” with open holes are where the rod known as the shrinkage strut attaches. It is necessary to compress the long main gear legs to fit them into the wheel wells. The gear legs were designed this way to allow more room outboard of the gear for the gun and ammunition bays. 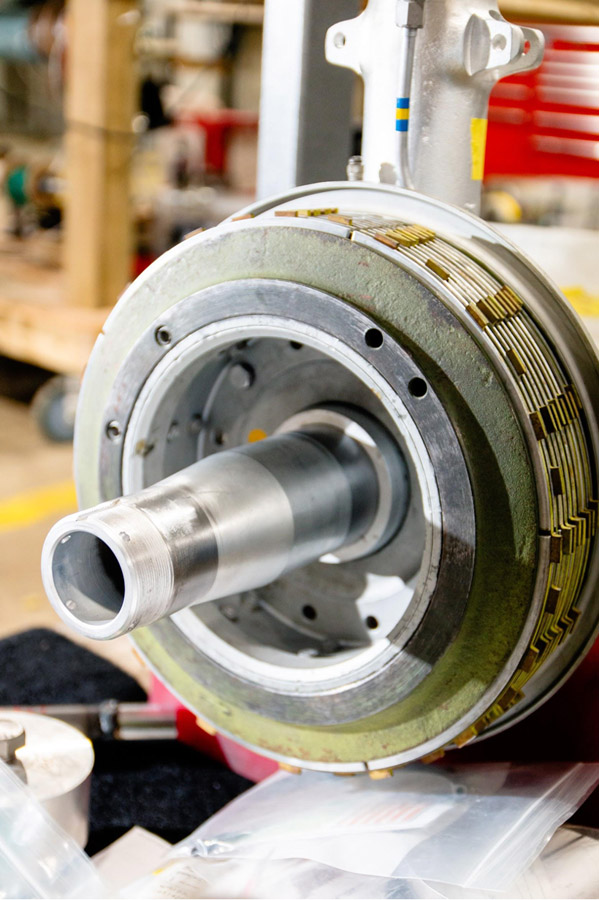 The multi disc brake assembly is in place on the axle. For this restoration, General Electric P-47N brakes are being used because their multi disc design is safer. The original brakes in a P-47D-23 would have been drum brakes that can fade because they don’t dissipate heat as readily as the disc design. 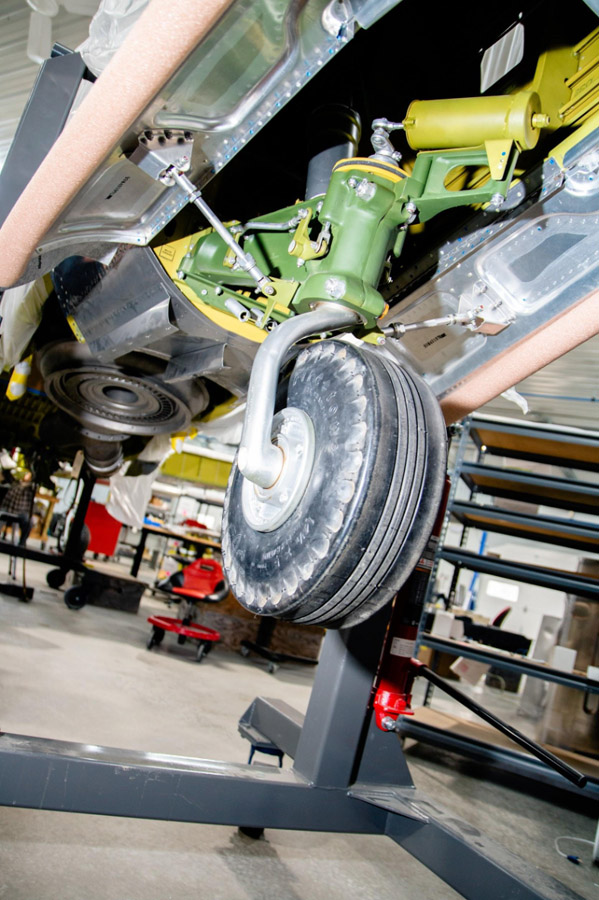 The tail wheel assembly is installed and the various mechanical and hydraulic connections have been completed. 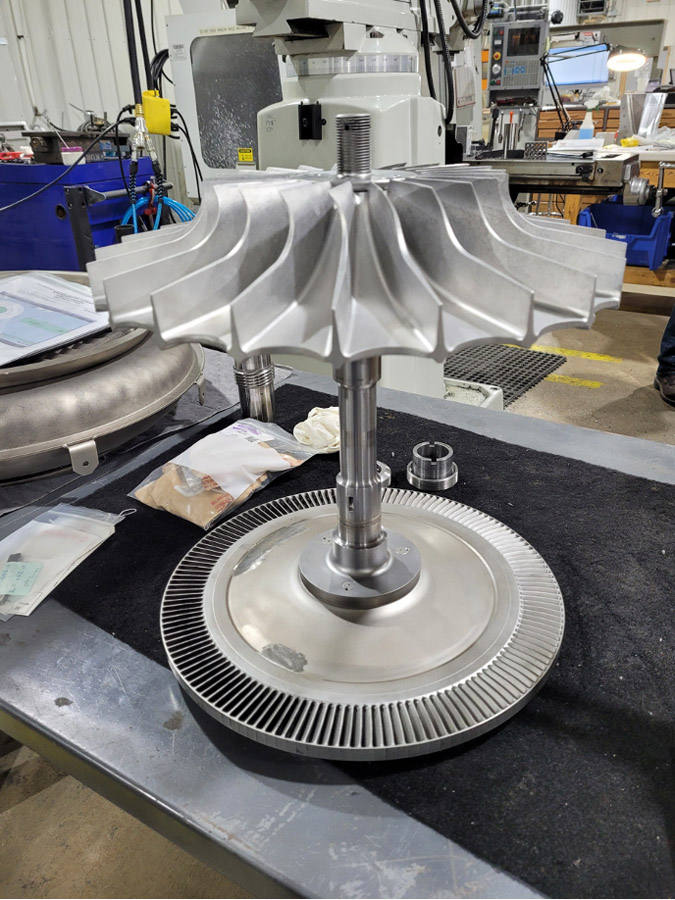 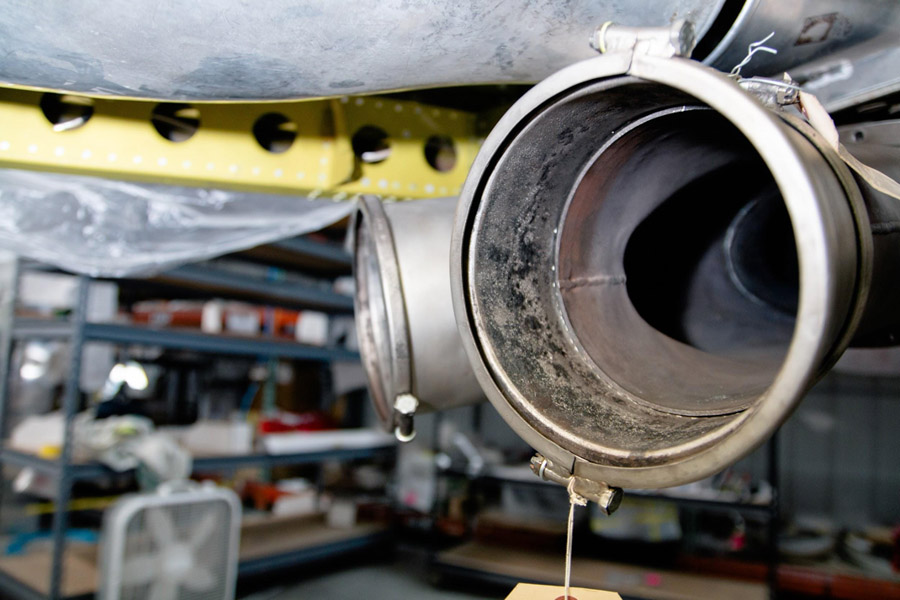 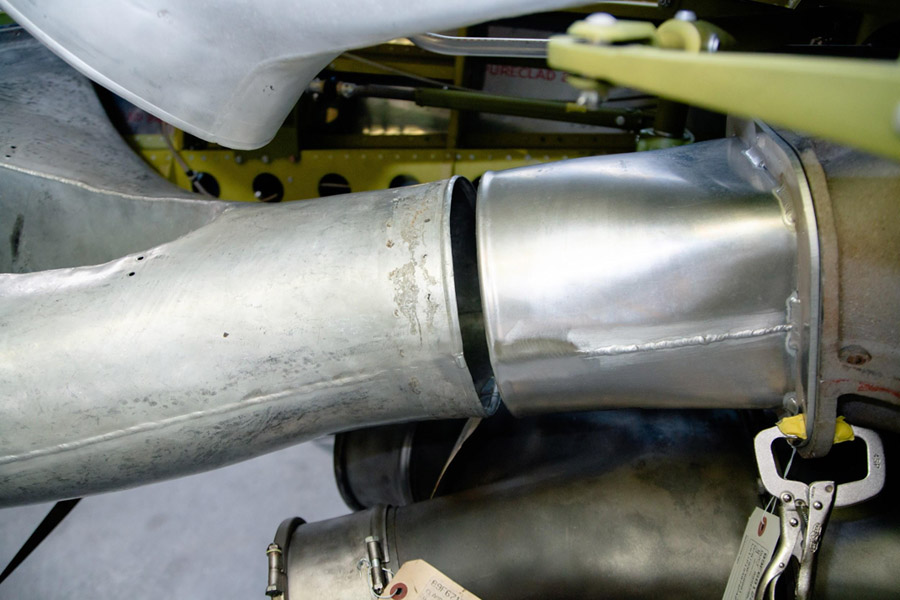 This is the upper connection that feeds the compressed air from the turbosupercharger back to the R-2800’s carburetor after it passes through the intercooler.

Both the connection for the exhaust gas to drive the turbosupercharger, and the compressed air connection can be seen in this image. 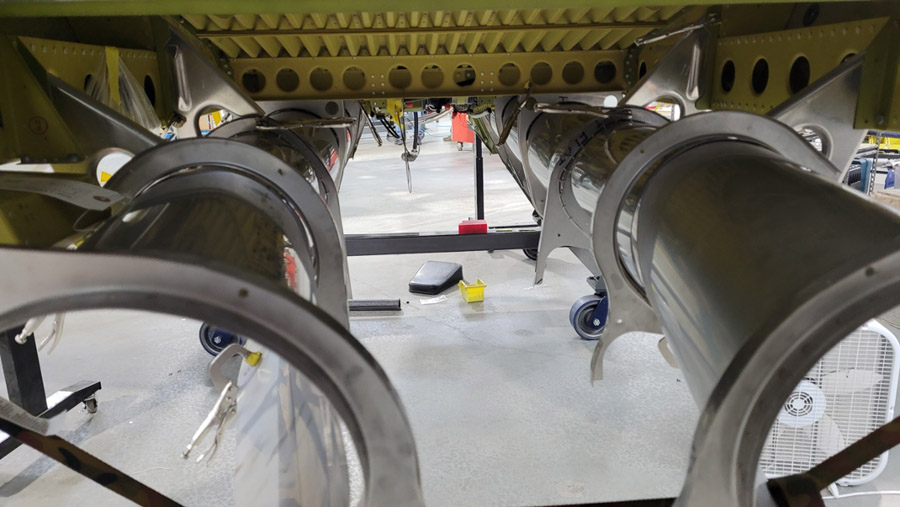 The exhaust tail pipes leading back to the turbosupercharger have been trial fitted.

Even at this stage of the restoration, small parts are still being fabricated. One example is the cover for the gun bay heat baffle. 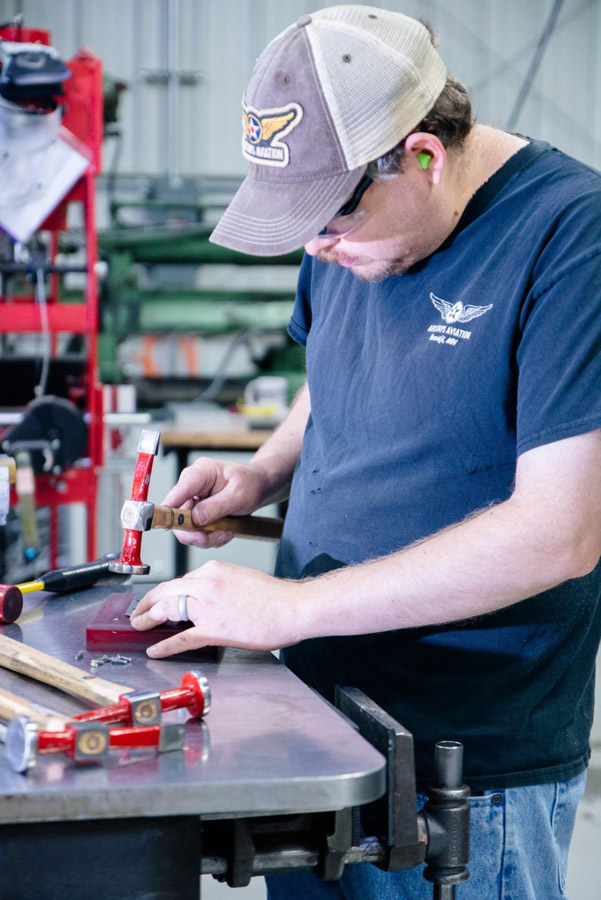 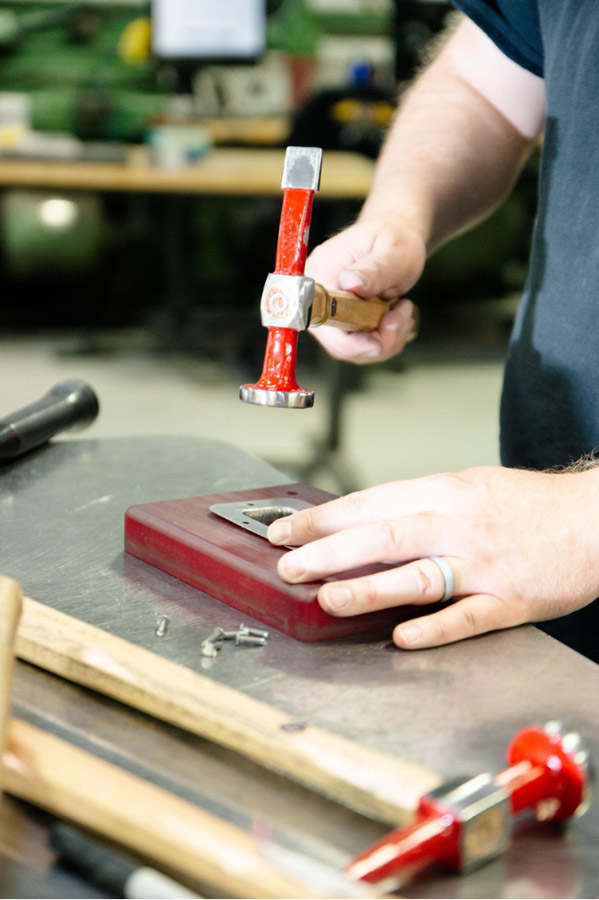 In this view the machined REN plastic form is more visible as Matt hammer forms the part.

There are so many complex systems on the P-47, and the exhaust system is no different. It has to flow back through the turbosupercharger to power that assembly before the exhaust gases are finally expelled. 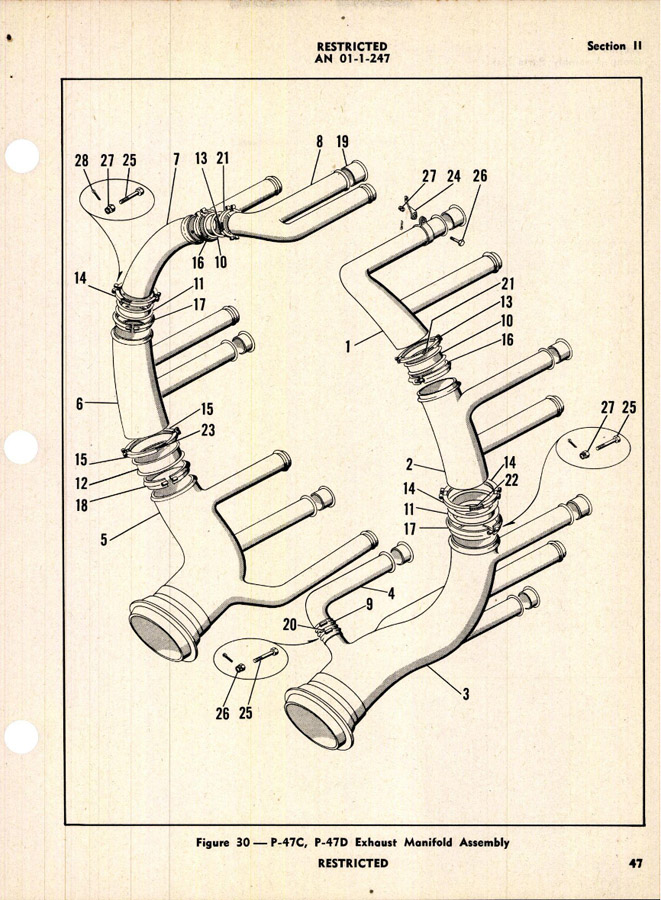 This diagram from a manual detailing the exhaust systems for multiple aircraft shows how the exhaust collector ring on the P-47 is assembled. 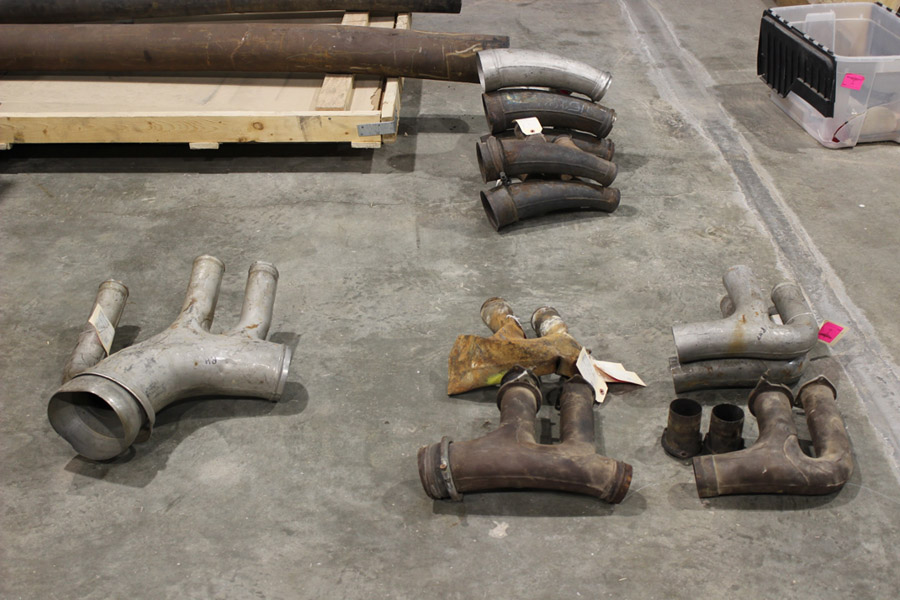 These are parts for the main exhaust assembly, the exhaust ring around the cylinders of the R-2800. All will be inspected, and some will be found restorable to service.

The branch that curves upward in this picture holds the wastegate control valve. The valve itself looks remarkably like a wood stove chimney draft flapper, and attaches to the shaft that sticks out in the photo. 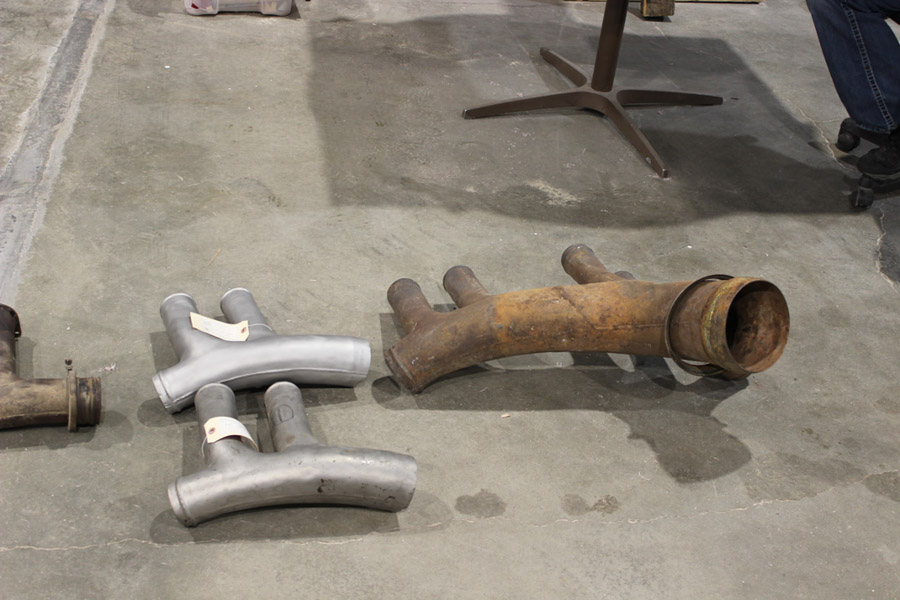 Here is a closer view of some of the exhaust ring parts.

42-27609 was operational in the combat area of Papua New Guinea from late May to the first part of September of 1944.

The 35th Fighter Group first received P-47D-23RAs in late June. They were the first Fighter Group to list the D-23 in their squadron history inventory pages. The 35th experienced a quiet period for combat during June and July of 1944, but combat missions increased greatly with the beginning of August. 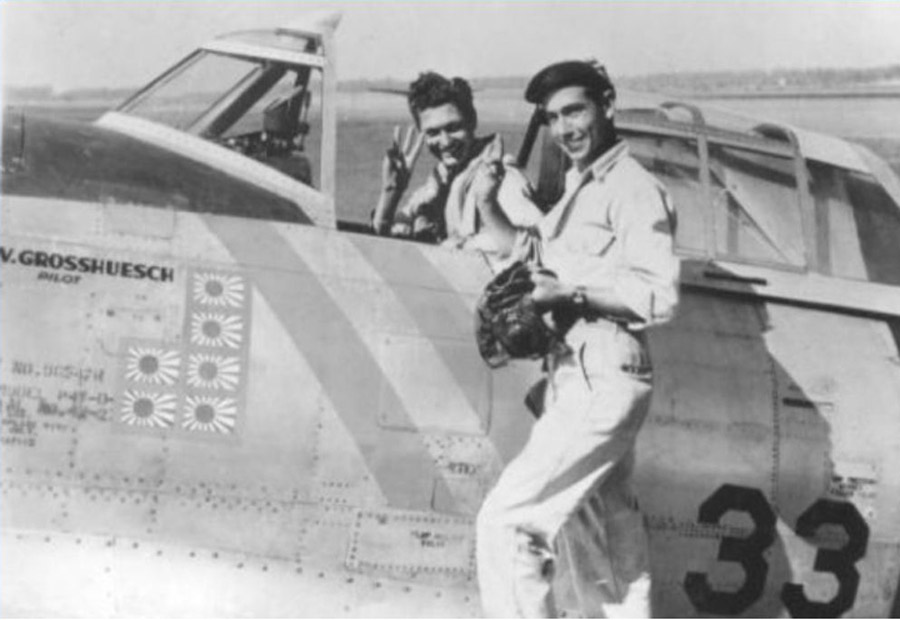 “On June 25th, 7 new P-47D-23RAs arrived from Finschaven. Seven more were added two days later but no missions were flown until August 3rd, when glide bombing was introduced against Japanese positions on Noemfoor Island and the Vogelkop Peninsula. For the first time, 500 pound bombs were used on the underwing shackles, doubling the P-47’s offensive load.”1

The 39th Fighter Squadron experienced a change in command during this period. Major Harris Denton turned the squadron over to Major Richard Cella. The first mission Major Cella commanded was a 900 mile flight of 26 P-47s from Nadzab to Noemfoor to cover the building of airfields on Middleburg Island. Over the next 6 weeks, the 39th guarded against the occasional raiding of Japanese soldiers during their tenure on the island.

On August 9th, their first operation from Noemfoor took place as two flights of P-47s covered a convoy off Cape Sansapor. Similar missions filled the next few days until August 20th when the squadron went out on a fighter sweep to the Moluccas, led by Captain Gordon Prentice. “With a flight duration of 5 hours and 20 minutes, it was the longest P-47 mission flown by the 39th (and probably any other Fifth Fighter Command unit) up to that date. No longer would the skeptics berate the P-47’s range. Later in the year, with three external tanks and a technique of controlling their cruising speed with propeller pitch, as demonstrated by Charles Lindbergh, the squadron registered missions up to eight hours.”2

The 39th and the rest of the 35th Fighter Group had moved 900 miles west during this time. The next big jump would be to the Philippine Islands later in 1944. 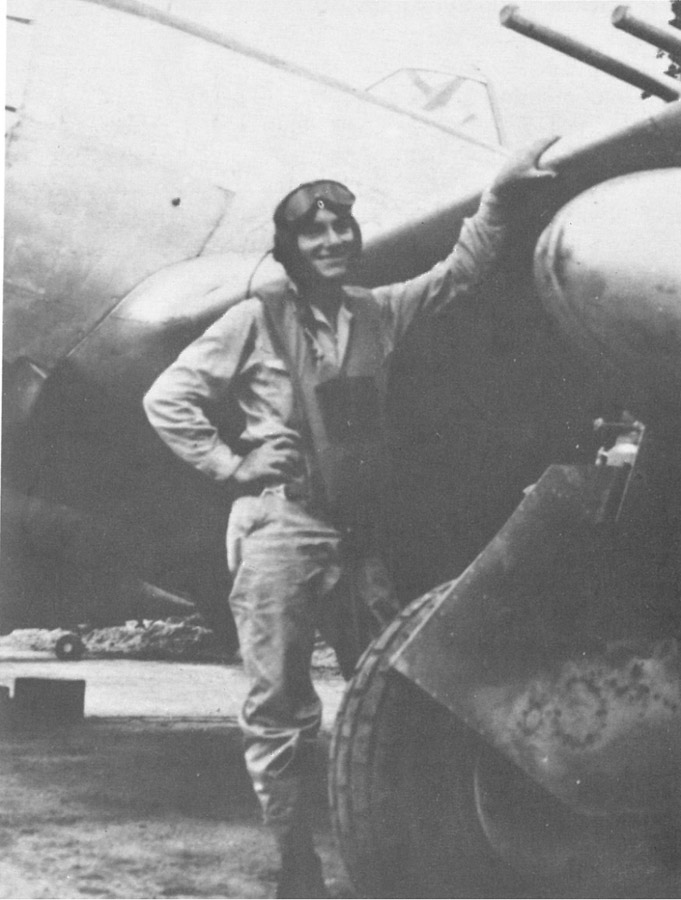 Lt. Billy Richards, killed over Jefman Island during a dive bombing attack, August 23, 1944. Photo from Cobra in the Clouds3

On August 23rd of 1944, the squadron sustained its first operational combat fatality, when First Lieutenant Billy Richards was shot down by enemy anti-aircraft fire over Jefman. Lt. Richards was flying P-47D-23RA, AAF serial number 42-27620. Richards’ P-47 is only 11 numbers after our restoration airframe in the Evansville sequence, and it arrived in Townsville, Australia on the same day. Both aircraft were shipped to the SW Pacific on the carrier Prince William, CVE 31.

On September 5th, a glide bombing operation was carried out on Halmahera. The P-47s made the 800 mile round trip with no difficulty and all returned safely with fuel to spare.

Air operations were halted briefly while the 39th began a move from Owi to Morotai on September 12th, the ground contingent arriving by ship four days later.