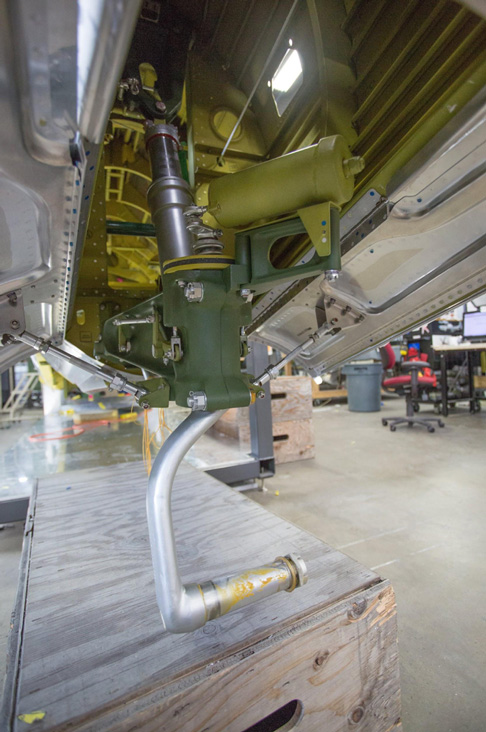 This month the restoration milestones include the tail wheel installation and the assembly of the firewall extension. We’ll check those out and incorporate the last installment of P-47 history.

The Thunderbolt’s tail wheel had to be strong and reliable to ensure safe take offs and landings at weights as high as 17,000 pounds for the D-23 and as much as 21,000 in later N models.  The tail wheellocks straight ahead after taxi and is released from the locked position after landing to be able to turn as The P-47 taxies.

The Thunderbolt is justifiably famous for ground attack missions in the European Theater of Operation.

But the P-47s ground pounding history didn’t begin in Europe.  While close air support of ground forces dates back to World War I, the air to ground communication of the time was very primitive, which limited effectiveness.

The fighter-bombers of the Allied and Axis powers in the Second World War were far more effective. For the USAAF in World War Two, close air support of ground troops was pioneered in New Guinea during the summer of 1942.

Long an advocate for ground attack, Fifth Air Force commander Major General George C. Kenney had taught a class titled “Attack Aviation Course” in 1937, and wrote the textbook for it.

General Kenney ordered his fighter groups to develop ground attack tactics after seeing the success of the A-20s.  Early 5th AF ground support missions were carried out with P39s, P-400s ( export version of the P-39) and P-40s.

When the formidably armed 8 gun P-47s arrived in the Southwest Pacific Theater in late 1943, they naturally were used in the ground support role as well as the air to air combat missions.

As the war progressed, the Twelfth Air Force moved on to Italy and Thunderbolts were used for ground attack extensively in that campaign. 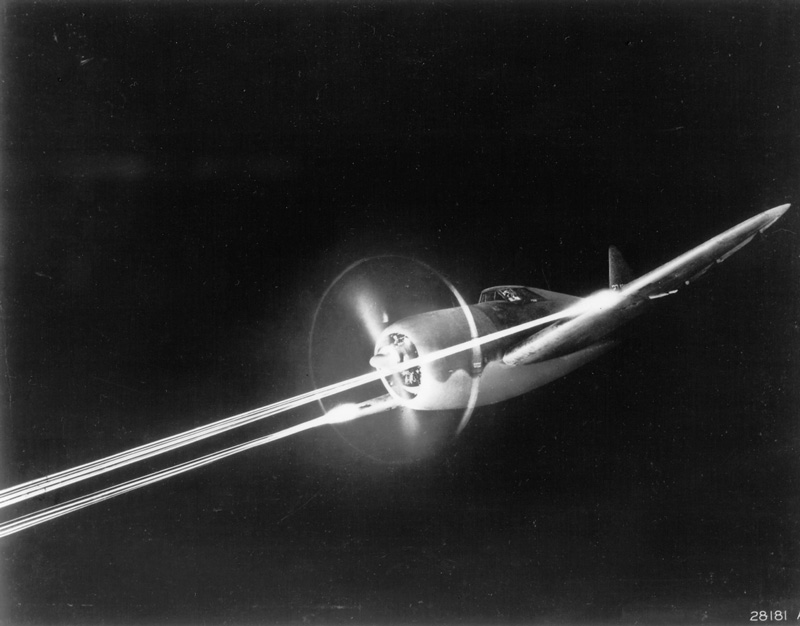 A P-47 firing its eight .50s is a formidable sight. Photo Wikimedia Commons

The effectiveness of the Thunderbolt’s eight .50 caliber Brownings, and its ability to carry a significant bomb load on the dangerous ground support missions in Papua New Guinea, made it a natural to be tasked with close support of the Normandy invasion and the subsequent march across France into Germany. The fighter-bomber or Jabo (short for the German jagdbomber) role of the P-47 is best known from the European Theater’s extremely effective and very dangerous ground attack missions after the invasion.

While various sources list slightly different totals, Thunderbolts have been credited with the destruction of an estimated 6,000 tanks and armored vehicles, 9,000 locomotives, 86,000 railroad cars and other rolling stock, and 68,000 trucks during the war.1 The number of troops killed and wounded by the P-47 in the fighter-bomber role will never be known accurately.

Besides the USAAF, P-47’s were sold or supplied to Brazil, Free France, Mexico, the UK, and the USSR during WWII.

Fifteen foreign countries and a few USAF reserve units flew the P-47 after the war.