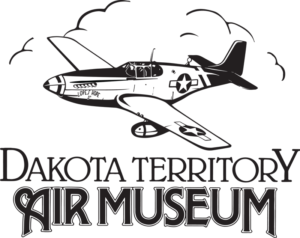 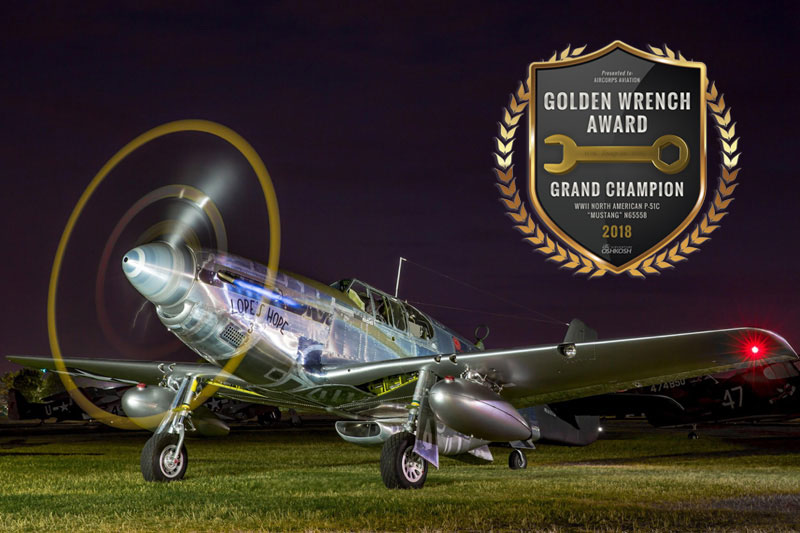 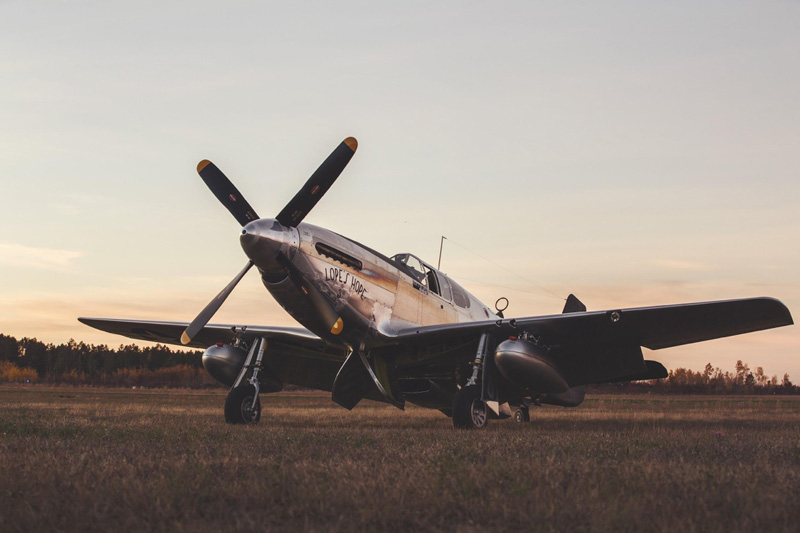 Don Lopez, the inspiration for this restoration

As far as is known, Lope’s Hope 3rd is the first P-51C restored to honor Mustangs serving in China. Donald and Lope’s Hope 3rd served in the China-Burma-India theater with the 14th Air Force, 23rd Fighter Group, 75th Squadron. The 75th’s mission throughout its service in China was to establish air superiority and strafe airfields, supplies, and Japanese troop concentrations.

The squadron flew from several airfields in China and moved from base to base, depending on the position of the front lines separating the Chinese army and the invaders from Japan. The 75th and sister squadrons, the 74th and 76th, were able to command the airspace and prevent the Japanese from developing a consistently effective bombing campaign in China during the final three years of the war.

Lt. Lopez flew 101 combat missions and had 5 victories in China. 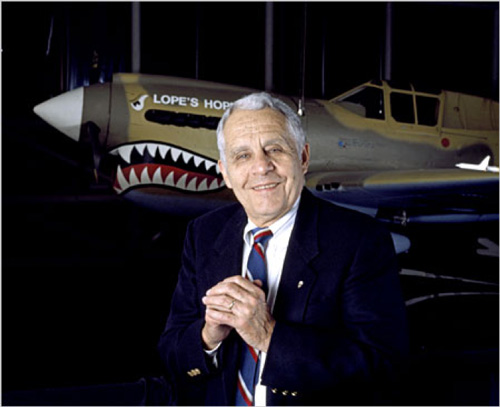 Don Lopez’s contributions to aviation didn’t stop with World War II. He went on to serve as a test pilot when the Air Force became a separate branch and transitioned to the early jets. At the close of World War II, Donald was assigned to the elite Proof Test Group of the Air Proving Ground Command at Eglin Field in Florida. There he test flew the P-59, P-80, and P-84, testing weapons systems, suitability for operational status, and developing tactics in the new jets.

Don also flew a tour in Korea, and spent five years helping establish the aeronautics department and teaching at the Air Force Academy.

Donald was instrumental in the planning and administration of both the museum on the Mall, which opened in 1976, and the Udvar-Hazy Center at near Dulles International Airport, which opened in 2003. Today, visitors to Hazy are greeted by a snarling P-40 with “Lope’s Hope” on the cowling and 194 on the tail. Don’s resting place is marked by a simple soldier’s headstone at Arlington National Cemetery.

Any time AirCorps presents a restored warbird for judging at Oshkosh, a great deal of preparation occurs to be certain that the airplane is presented at its best.

Before the trip, a 44 page judging book was prepared, to highlight details of the restoration that demonstrate craftsmanship, and both historical and technical accuracy. 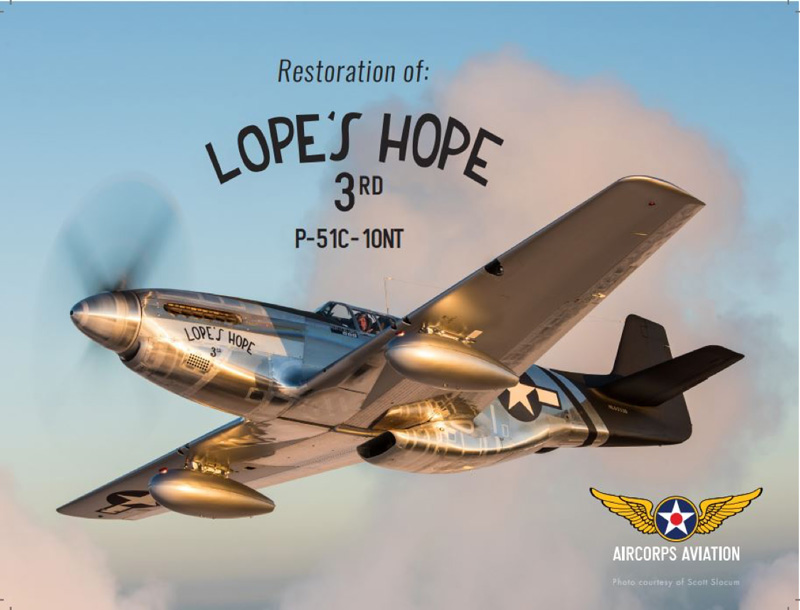 Lope’s Hope on the cover of the judging book. Photo by Scott Slocum

Display boards were an important part of the Lope’s Hope 3rd presentation. AirCorps’ historian composed, titled and obtained photo permissions. Then the material created was used by Evolve Creative to design attractive display boards. These were mounted on sandwich board stands for easy set up and take down.

The best reason to display a warbird at AirVenture is to share it with the people who attend. The history of the warbirds, the great men who flew them, and the sacrifices and effort that united America and allowed us to emerge victorious are preserved in a dramatically visual way by flying warbirds. Talking to people who stop by the display of a warbird allows that same history to be told in detail specific to a single plane like P-51C Lope’s Hope 3rd.

We spoke with thousands of visitors and had some very special people stop by. 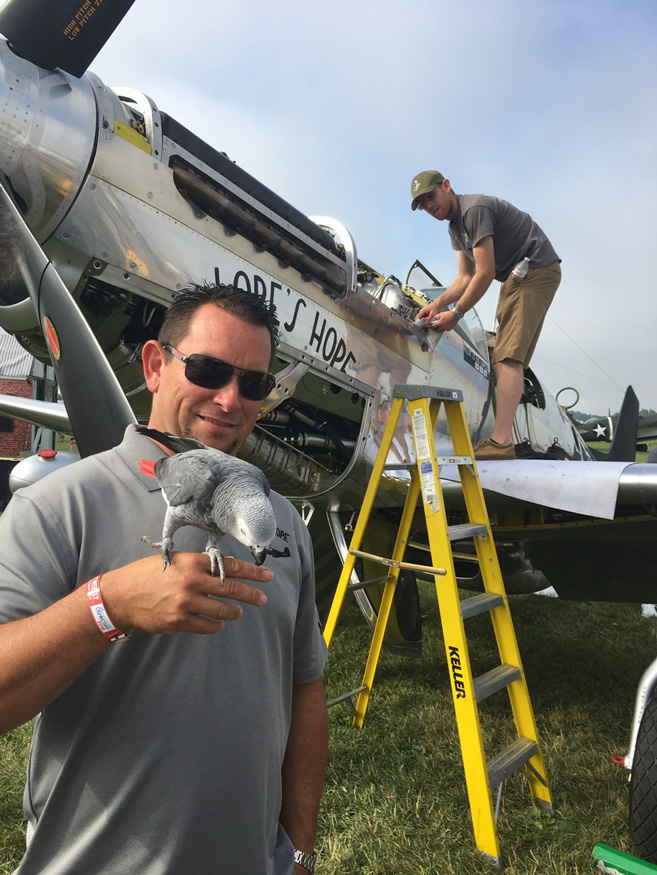 It‘s pretty unusual to see a parrot in the warbird area at AirVenture, but there’s a good reason for this avian visitor’s presence on Bernie Vasquez’s finger.

Lt. Lopez had a pet parrot in China, and Ken Voight brought the parrot and a bit of interesting history:

“My father-in-law was in China and flew some missions with Lopez. It always cracked him up when he talked about Lopes’ parrot and if the parrot started drooping his head, Lopez would give it oxygen.” – Kent Voight

After 6 days of displaying Lope’s Hope 3rd and sharing Don Lopez and his P-51C’s history, it was time to attend the EAA Warbirds banquet.