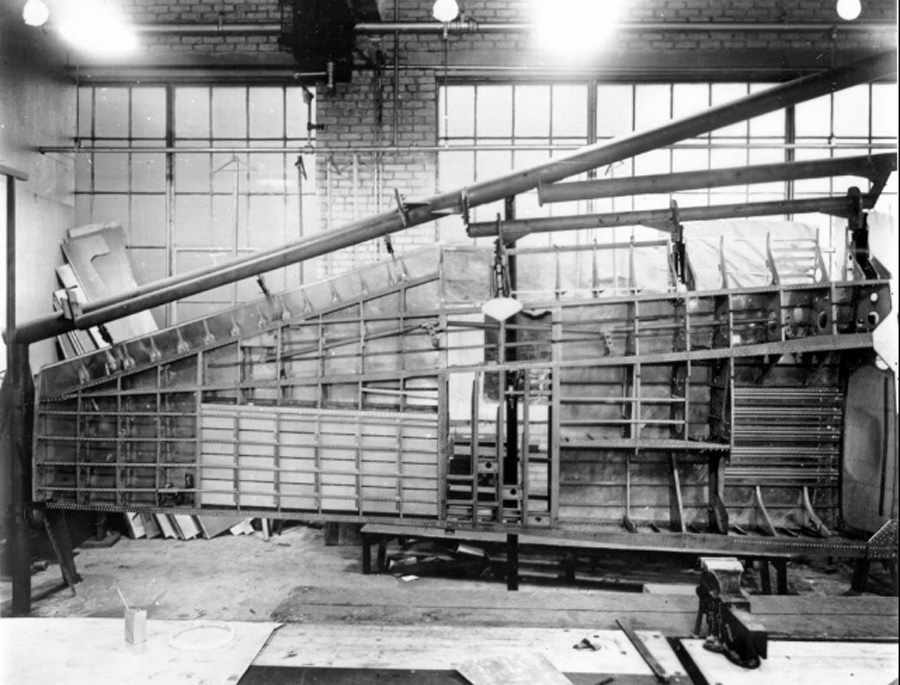 A P-47 wing in its fixture at the Evansville, Indiana Republic factory. Photo courtesy Harold Morgan 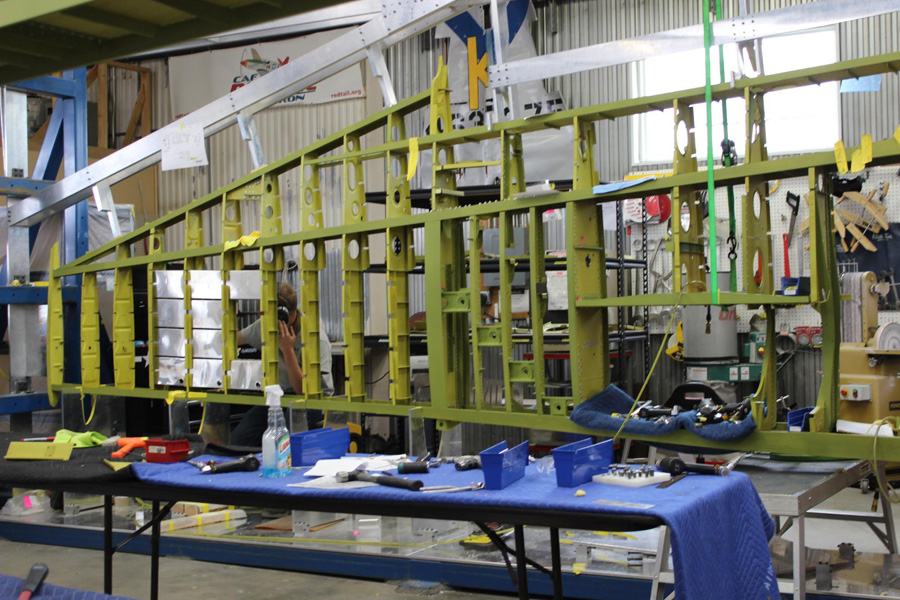 The factory photo shows the wing after part of the upper skin had been attached, but other than the upper skin, the 42-27609 wing restoration is very nearly at the same stage of completion.

The complex and time consuming wing structure assembly occupied much of the restoration technicians’ time this month as it has for several months.

The main complaint against the P-47 when the 5th Air Force began operating Thunderbolts was that they lacked the necessary range  needed to reach the Japanese bases. One of the attempted solutions was adding a tank behind the pilot in the upper turtledeck. The space available dictated the shape of the tank, which ended up being reminiscent of a Christmas tree.

The new tank was problematic, causing fire hazard issues, and a rearward center of gravity. Because of these problems, nearly all of the tanks were removed. However, 42-27609 still had the tank installed when it was recovered from Papua New Guinea.

The range problem was eventually solved using  lean cruising techniques and with large drop tanks. As many as three at a time were carried on long missions.

World War II self-sealing tanks were made with  multiple layers of rubber and reinforcing fabric. The outer layers were vulcanized rubber, and the inner layers were untreated natural rubber. When punctured, the inner natural rubber layer swelled from contact with the fuel and sealed the bullet holes.

Alexander Kartveli, the P-47’s designer, favored a wing plan shared by the prewar P-35: a straight leading edge with curved tips and semi-elliptical trailing edge. This design gave an elliptical area distribution without the manufacturing difficulties of a curved leading edge.1

Kartveli’s design created a much more complex structure than the straight trailing edge of the P-51 wing. 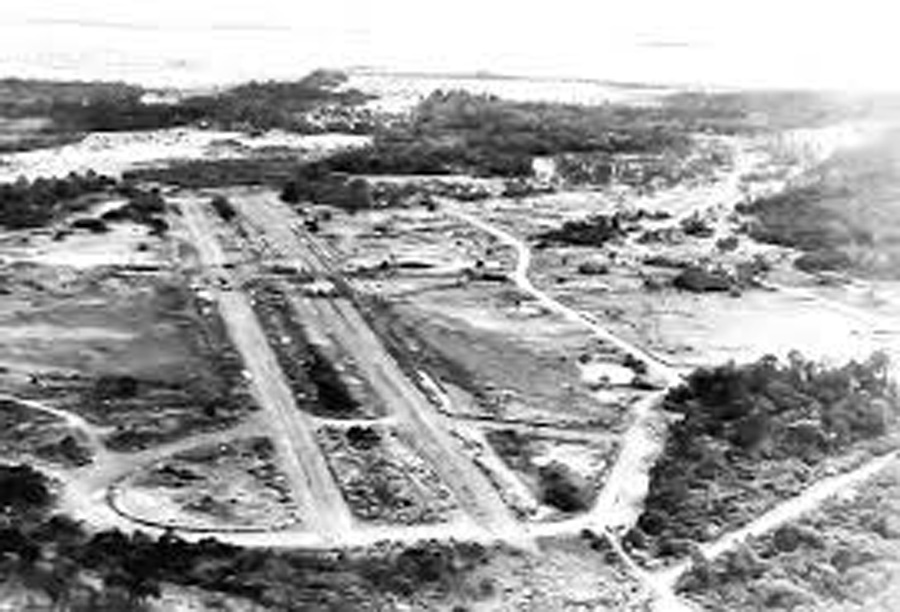 In June of 1944, the 39th Fighter Squadron was based at Nadzab in the Markham River valley. Nadzab was about 20 miles inland from Lae on the northeast coast of New Guinea. At this time, preparations were under way to move closer to the Japanese bases by transferring to Owi Island, 818 miles to the west.

“Meanwhile the pilots underwent training until the Owi base was ready. On June 25, 1944, seven new P-47D-23s arrived from Finschafen.” 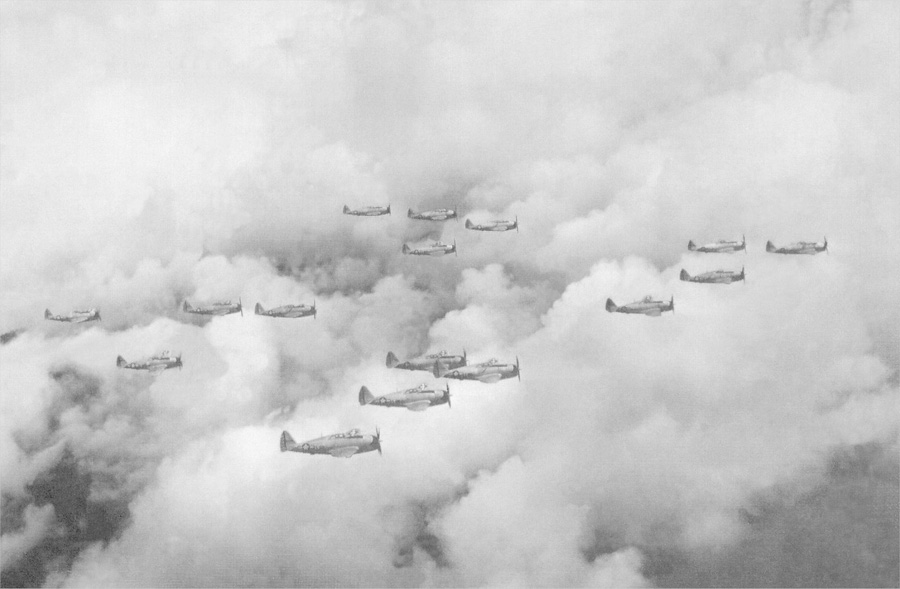 “Seven more were added two days later but no missions were flown until August 3, when glide bombing was introduced against Japanese positions on Noemfoor Island and the Vogelkop Peninsula. For the first time, 500 pound bombs were used on the underwing shackles, doubling the P-47s offensive load.”2

Glide bombing is similar to dive bombing,with the essential difference being a lesser angle of the attacking dive.

The technique normally used during WWII was to fly past the target to one side, then turn into the dive. A dive angle between 30 and 60 degrees was established, and the throttle was cut to prevent problems with ovespeeding and compressibility. The bombs were dropped by aiming slightly above the target, and released at an altitude of around 1500 feet (or sometimes lower).

On August 7th, Major Richard Cella led a flight of 26 P-47s on a 900 mile trip from Nadzab to Noemfoor. This mission established that the long range adaptations for the P-47 had been successful.

Over the next 6 weeks, the 39th flew missions guarding against the occasional raids on Middleburg Island airfields by Japanese soldiers.

On August 9th, the 39th FS operated from Noemfoor for the first time when two flights of P-47s covered a convoy off Cape Sansapor. A number of similar missions ensued until August 20th, when the 39th flew a 5 hour and 20 minute fighter sweep to the Moluccas. At the time, this was the longest P-47 mission flown, though later in the year, using 3 external tanks and maximum range techniques demonstrated by Charles Lindbergh, the squadron flew missions of as much as 8 hours.

On September 5th another glide bombing mission was flown, this time to Halmahera. The 800 mile round trip was carried out with no losses.3 The move to Morotai began on September 12th, and combat operations were diminished until routine patrol missions resumed on October 5th. By that time, 42-27609 had been taken out of service (on September 18, 1944).