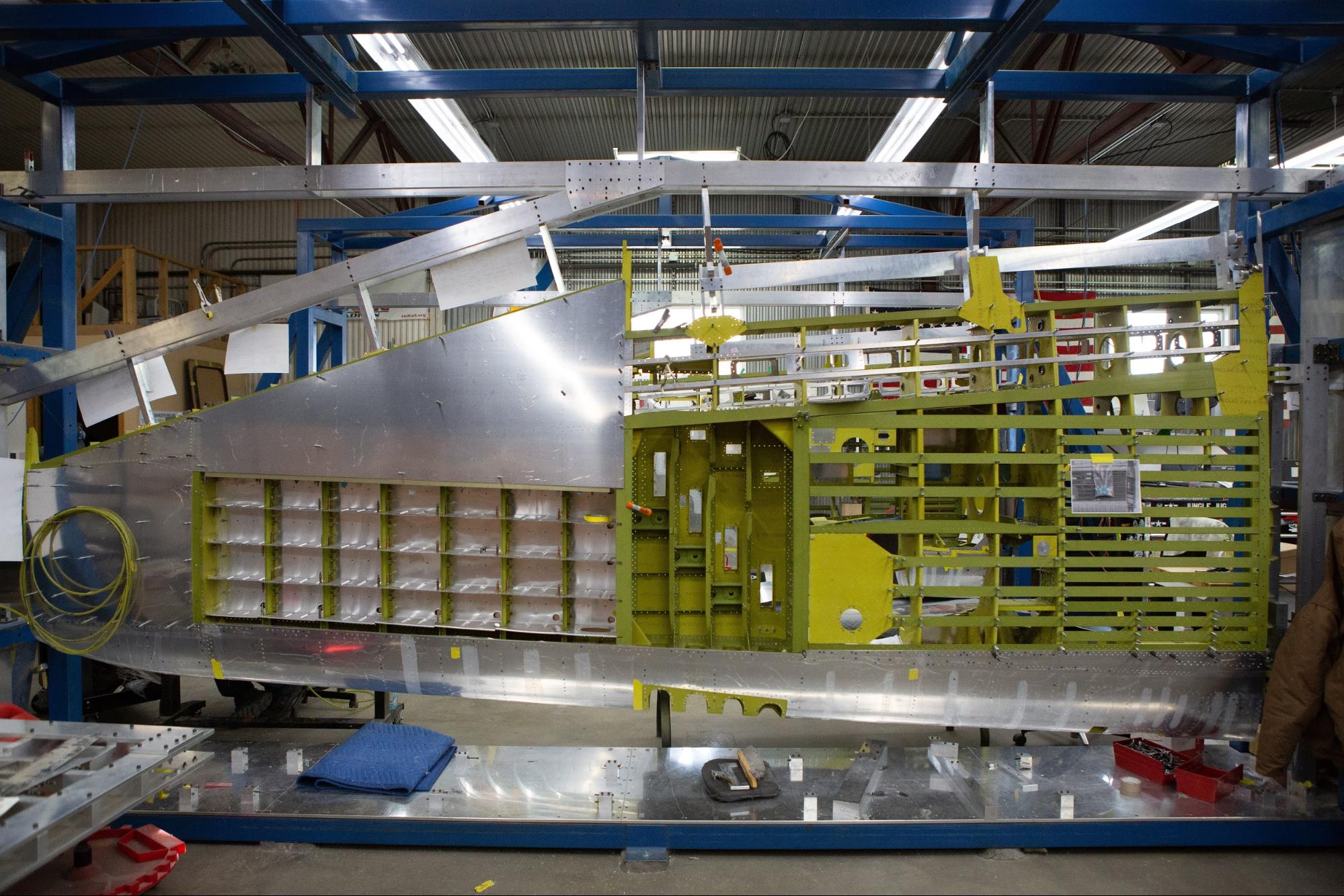 More skin has been fitted and riveting has begun on the wings.

The newly restored radio components arrived from John Castorina at Warbird Radios and permanent installation on the 5th Air Force field modified mounts has begun. The restoration technicians continue working hard on the wings, with new skin and wheel wheel completion the major tasks this month. Hydraulic plumbing and radio wiring is the focus of fuselage restoration.

The structurally complex wing remains the major focus of restoration efforts this month.

The outward appearance of the fuselage doesn’t change much as all the myriad of internal systems are installed and connected, but progress goes on.

The Thunderbolt relied on a formidable array of 8 .50 caliber machine guns for air to air combat and strafing. Most other US fighters used the same weapon, the Browning AN/M2 .50, but only carried 4 or 6 of these heavy machine guns. 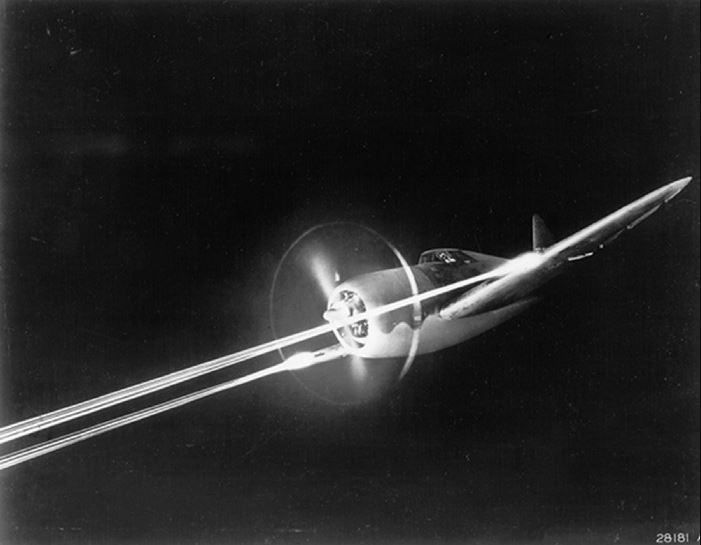 The eight .50's firing together from a P-47 could deliver over 9 lbs of lead per second. Spent cases and links were ejected from the bottom of the wing. 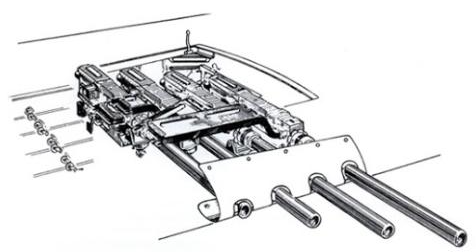 The Browning M2 heavy machine gun is a truly remarkable weapon. It is the second longest-serving weapon in the US military’s arsenal, after the M1911 semi-automatic pistol (another weapon designed by the prolific genius of gun design, John Moses Browning). Slightly upgraded versions of the M2 are still employed by over 60 countries worldwide. The M2 defined the modern use of the term “heavy machine gun”.

The origin of the Browning M2 dates back to battle conditions observed in the first World War. At this time the U.S. Army infantry and air service were armed with .30 caliber machine guns like the Browning M1917 on the ground, and the Lewis or Vickers gun on aircraft. Tanks, armored vehicles, and even an armored German aircraft (the Junkers J-1 ground attack aircraft) were introduced in WWI, and because of this it soon became apparent that there was a need for a more powerful round capable of penetrating armor better than the venerable M1 (30-06). General Pershing requested the development of a new machine gun with a caliber not less than .5 inches and a muzzle velocity of at least 2,700 feet per second.

John Browning went to work scaling up the M1917 machine gun for a heavier cartridge of his own invention. Browning scaled up the .30-06 round to .50 caliber (12.7-millimeter) initially for use as an anti-tank round and then adopted it for a new machine gun, the water-cooled M1921. The M1921 weighed 79 pounds without water and fired 500 rounds a minute.

John Browning’s machine guns worked on the recoil-operating principle. The rearward force of expanding powder gasses pushes the barrel and bolt to the rear, and after a short recoil, the bolt is unlocked and the barrel stops. The bolt continues to the rear, and the feed mechanism feeds a round from a belt of ammunition. The bolt pushes the cartridge into the chamber as it is returned by a spring until it again joins the barrel. Unfortunately, Browning’s invention wasn’t ready until after the Armistice of 1918, too late for WWI combat.

After Browning’s death in 1926, a Dr. S. H. Green redesigned the M1921 creating a downward-ejecting common receiver design which could be modified to feed from the left or right. The new machine gun became the Browning M2. The right and left feed options would prove to be very useful in adapting the M2 to fighter plane gun bays, since the ammunition chutes would feed from the left on the left wing gun bay and from the right on the other wing. Colt started manufacturing the M2 in 1933. 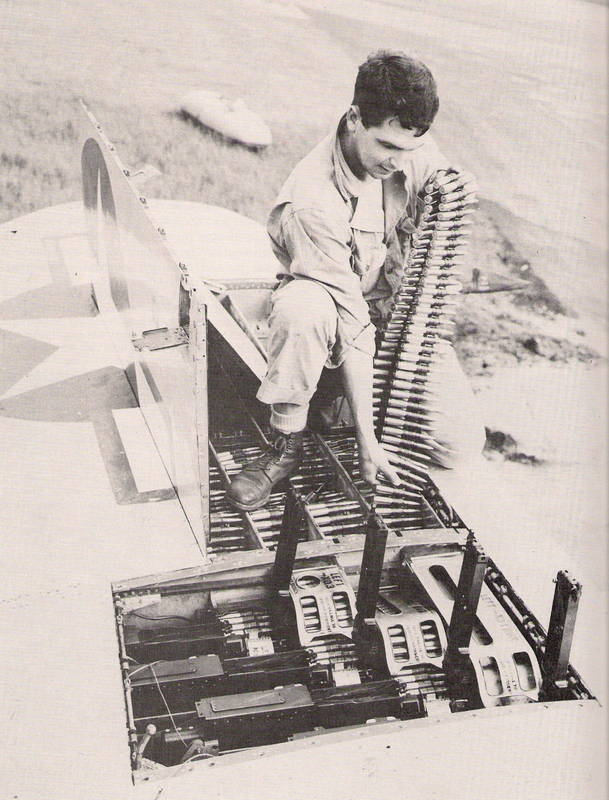 Crewman loading .50 caliber rounds into the ammunition chutes on a P-47, USAAF photo

The Browning .50 caliber was used in very nearly all US WWII fighters and bombers. The M2 began to be installed in US fighters in the 1930’s.  Some versions of the Boeing P-26 “Peashooter” carried one .30 and one .50 caliber machine gun. The Navy Grumman F3F had a similar gun set up. By the end of the 30’s the P-40D carried two .50 caliber M2s in each wing.

Combat experience showed the need for more firepower and the typical US fighter carried 3 .50s in each wing by about 1942.

The P-47 carried 4 Browning AN/M2 .50 caliber machine guns in each wing in nearly all Thunderbolt models produced. Up to 400 rounds could be carried per gun, enough for 32 seconds of fire, but the ammunition load was often reduced to compensate for the carriage of bombs or external fuel tanks.

Cooled by the aircraft’s slip-stream, the air-cooled .50 caliber (12.7 mm) AN/M2 was fitted with a substantially lighter 36-inch length barrel, than the M2s destined for ground use. The lighter barrels reduced the weight of the complete unit to 61 lbs. (23 lbs. Less than the 84 lb. Ground version) and also had the effect of increasing the rate of fire. The shorter, lighter barrel in the aircraft version allowed the gun to cycle slightly faster because there was less inertia in the lighter moving barrel and bolt.

Originally, the Air Corps adopted the M2 with a 600 r.p.m. cyclic rate. But, as aircraft speeds increased, fighter pilots had less time to track and shoot. Therefore, Frankford Arsenal boosted muzzle velocity from 2700 to 2880 f.p.s.. The standard ball cartridge was the 709-gr. projectile atop 253 grs. of IMR-5010. Armorers experimented with various belting combinations, alternating ball, armor-piercing incendiary (API) and tracer. The M2 AP (armor piercing) round would defeat nearly an inch of face-hardened steel at 200 yds. Armor-piercing incendiaries (usually 647 to 662 grs.) were most useful against aircraft, as they could penetrate enemy armor and engine blocks, sever enemy airframe components, and ignite enemy fuel tanks.1

Seeing a Thunderbolt diving at you with 8 .50s throwing a stream of fire had to be a terrifying experience!