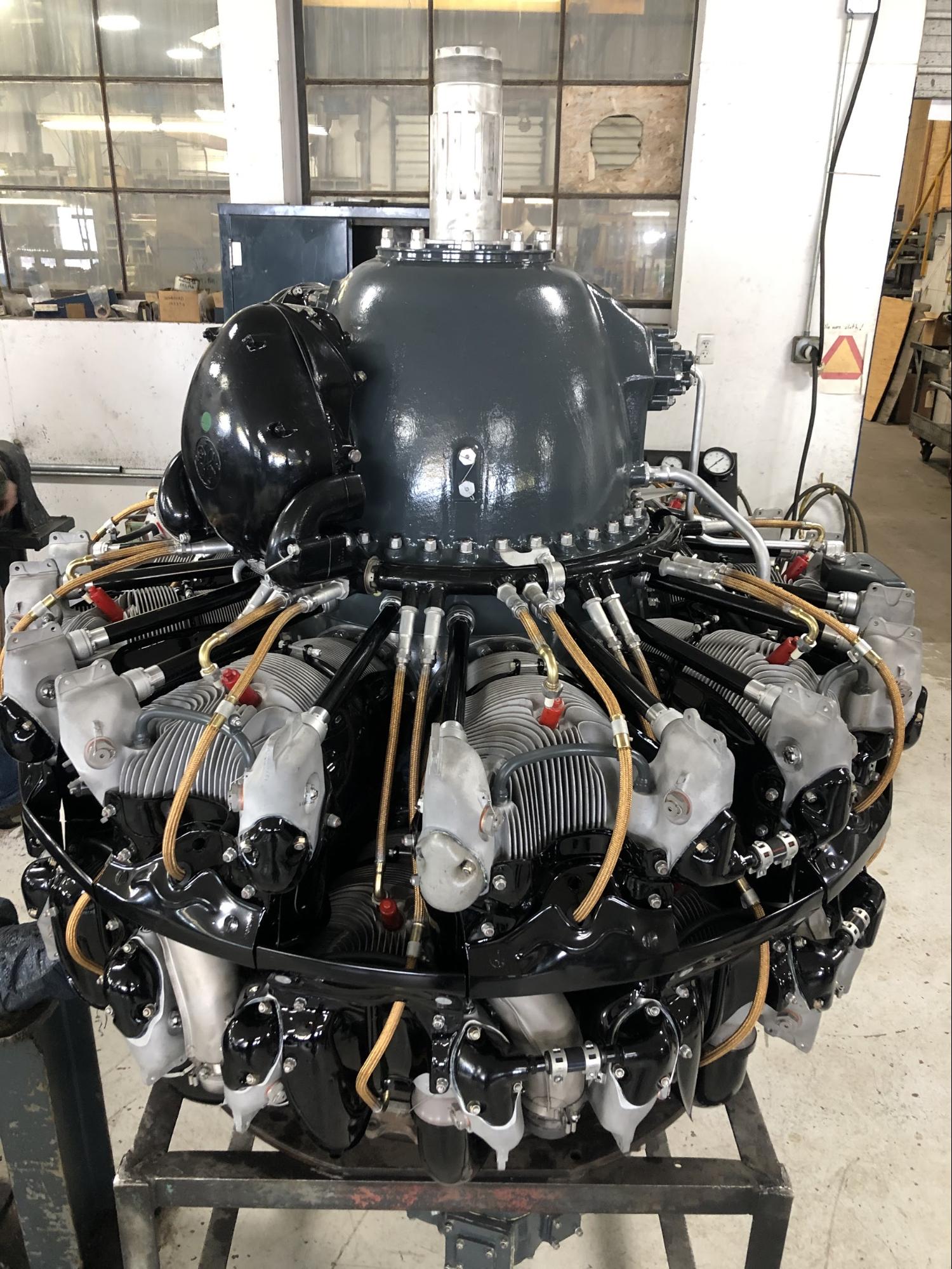 The Pratt & Whitney R-2800-59 Double Wasp for 42-27609 is finished and ready for test running at Anderson Aeromotive in Grangeville, ID

Some exciting news came from subcontractors this month. John Castorina has completed bench testing the SCR 274 comm radio set up for the P-47 and I am excited to incorporate his written description of his fine work into this update.

Another exciting development is that Anderson Aeromotive has the R-2800 power plant ready to test run.
Here at the AirCorps Aviation shop, the wing work and some fuselage detail work continues.

Preparations to install the radio system, some systems detail work, and firewall forward structural work were the areas of progress this month.

John Castorina consented to write about his work on the communications radios for 42-27609. His writing is exactly what was needed to explain the radio system work, so he is our contributing author this month. 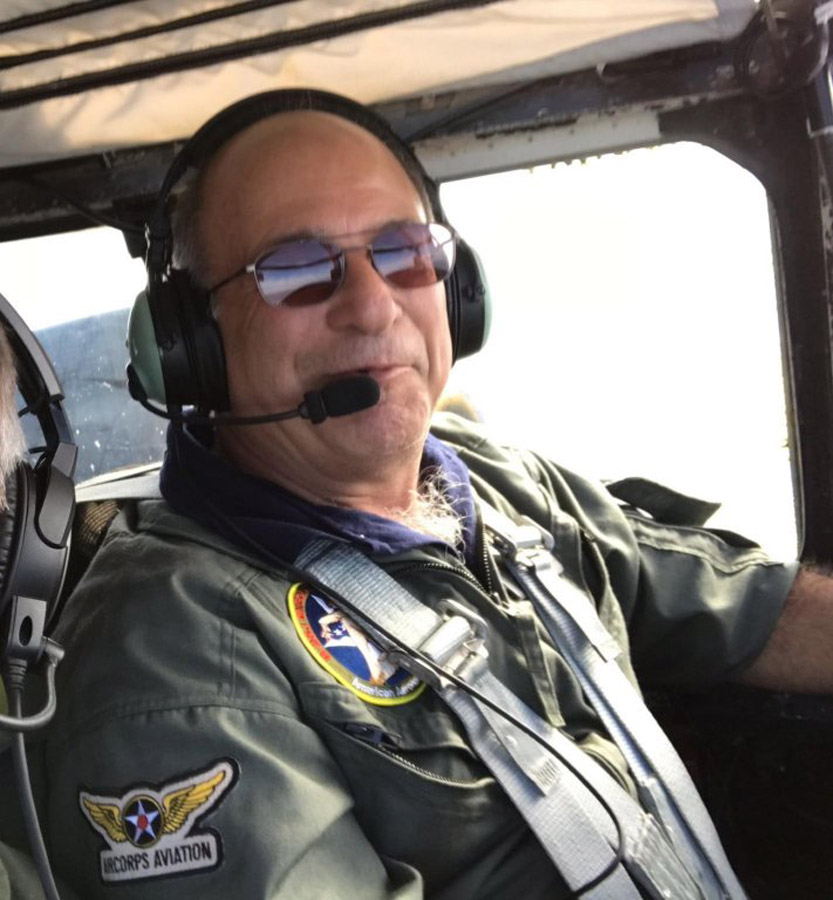 First a little background: John worked for Communications Satellite Corporation for over 20 years and is a commercial pilot. He is a Cessna 180 owner and 2015 Oshkosh winner. For AirCorps Aviation, John restored the radio sets for Sierra Sue II (Reserve Grand Champion 2015) and Lopes Hope III (Grand Champion 2018). Currently, John is the Director of Maintenance at Palm Springs Air Museum and flies North American B-25 “Executive Sweet” and Douglas C-47 “What’s Up Doc” whenever possible. He is the proprietor of Warbird Radios, located on Santa Paula Airport, Santa Paula, California.

Restoration of the communications radios for the Dakota Air Museum P-47D-23RA Thunderbolt has progressed to the integrated testing phase. Here’s a little background on these radios, and a short description of the restoration process.

Designated “SCR-274N” and commonly referred to as “Command Sets”, the SCR-274N was adopted by the Signal Corps as the main aircraft communications radio set for WW2. The SCR-274N is similar to the Navy ARA and ATA sets, whereas the ARC-5 sets came along later and have significant differences from the earlier sets, despite similar appearance.

The SCR-274N was found in all aircraft types, from single-seat fighters to large multi-engine bombers. The modular design allowed for any given installation to consist of from 1-4 transmitters and 1-3 receivers. 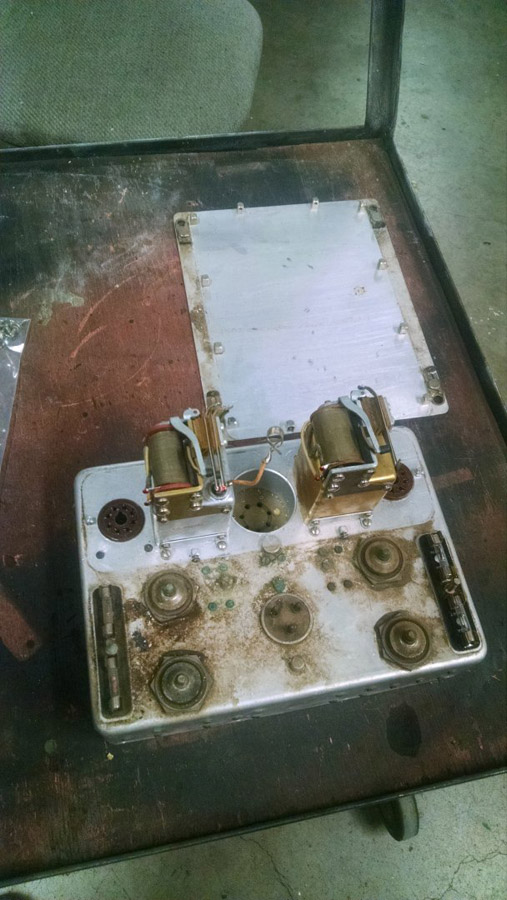 This is the modulator before restoration,
John Castorina photo 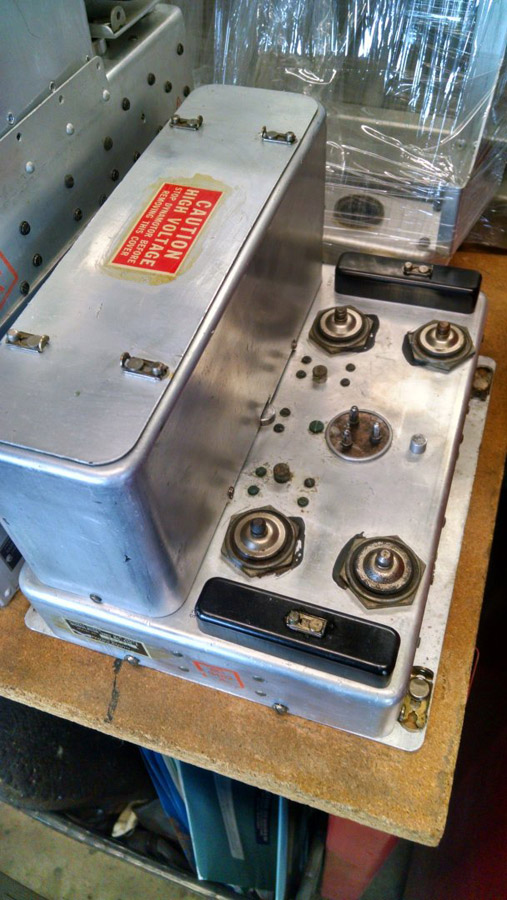 The modulator after restoration, the modulator supplies power to the transmitters and receivers.
John Castorina photo

All installations required one modulator, which also supplies power to the transmitters, and appropriate control boxes and mountings. Operating in the High Frequency (HF) range, four different receivers and four different transmitters cover the frequency range 0.19 mhz to 9.1 mhz. The transmitter power output ranges from about 40 to 60 watts, depending on mode (AM voice, cw, or amplitude modulated cw). 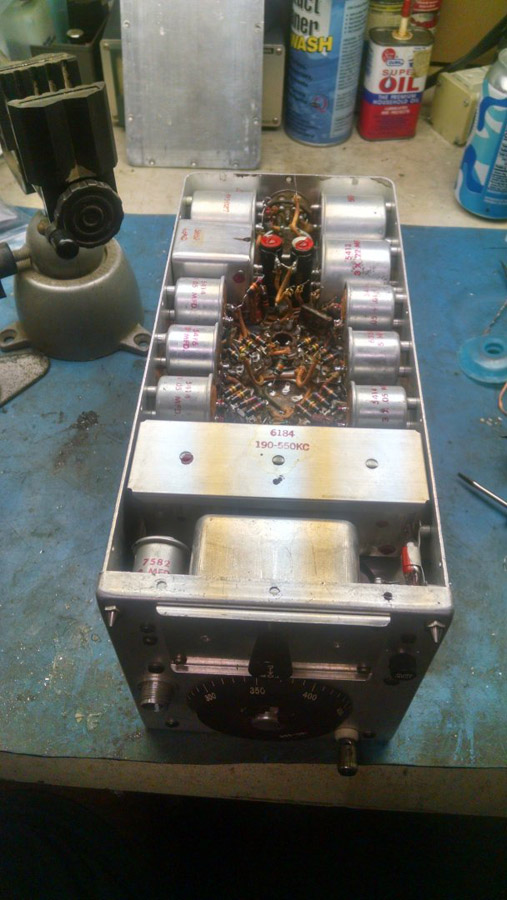 This is a receiver undergoing restoration.
John Castorina photo 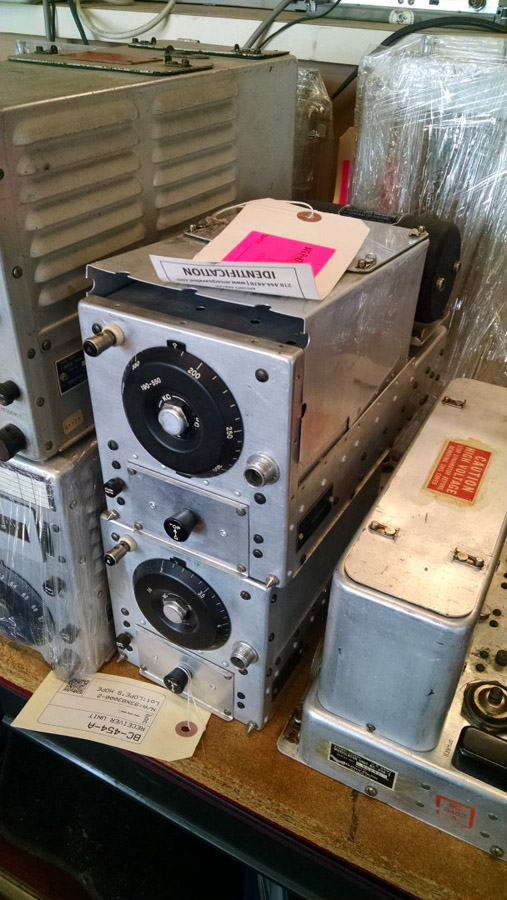 Work is in progress, two receivers sit in the middle, with the modulator on the right and a transmitter to the left. John Castorina photo

For the Dakota Air Museum P-47D-23RA, three receivers and two transmitters are required. As always, the first step in the restoration process was to locate all the components in un-modified condition and with the best cosmetic appearance. Even though it’s been 75+ years since these components were manufactured, many are still available but the majority have been modified by amateur radio operators for use on the “ham” bands and operation from “house” power, versus aircraft 28 volt dc systems. 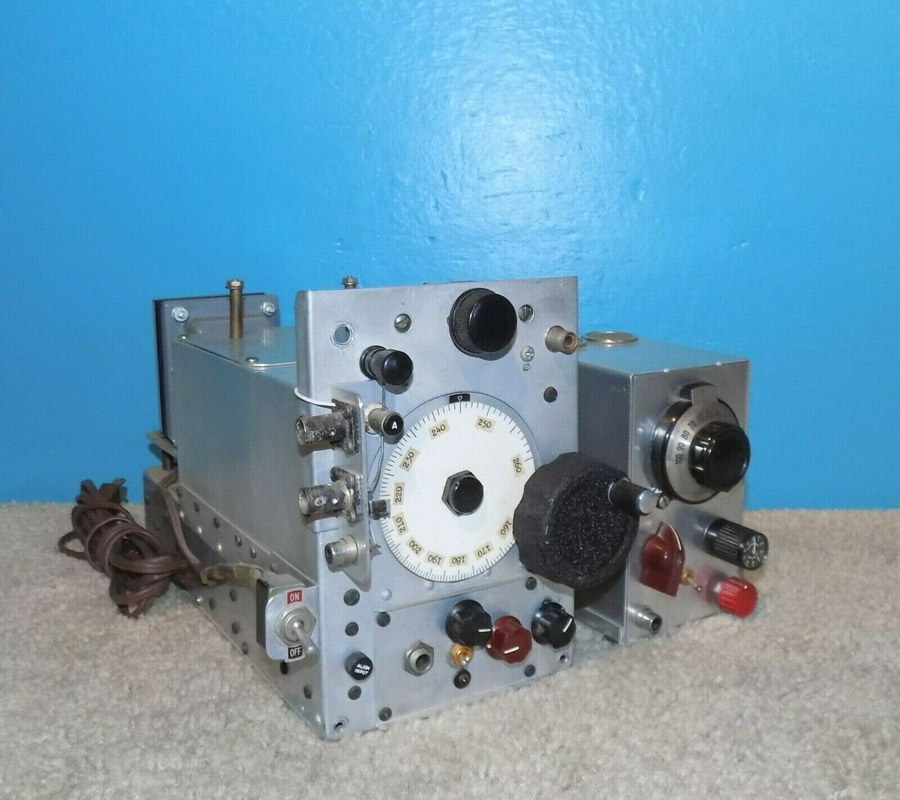 This is a much modified receiver that is like many still in existence, not suitable for warbird restoration. Photo from an EBay post.

Of those that survived in un-modified condition, many suffer the ravages of poor storage – dents, corrosion, varmints and other conditions that render them difficult, in some cases impossible, to restore to “as-built” condition.

Cosmetic restoration of each unit occurs first, after disassembly, and involves careful removal of all dirt, stains, dents and other imperfections. I take pictures of each unit so that if required, all factory markings can be reapplied exactly as found after a unit is deep cleaned or re-painted. All electrical contacts in relays and connectors are cleaned and treated with a special product which inhibits corrosion and promotes conductivity. Finally, all tubes are dynamically tested to ensure they meet factory test criteria. 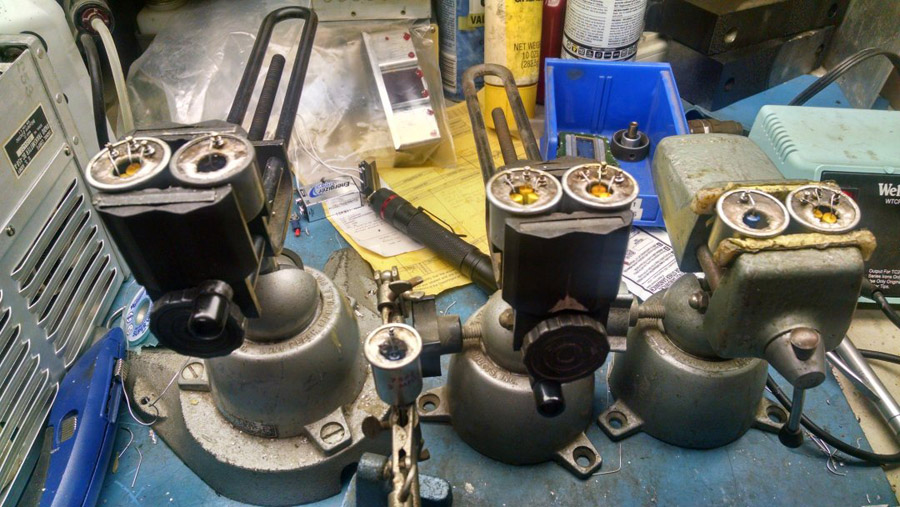 The second most time-consuming task (after cosmetic restoration) is the removal and replacement of every capacitor in each transmitter and receiver. Capacitors are the first items to die electrically, and most have long ago reached this stage. To maintain the original appearance, the capacitor cases are gutted, then new modern components are installed in the original case, followed by cosmetic work to ensure the final appearance is close to what it was when the units were built.

Dynamotors are opened, cleaned, and old (usually hardened) grease is removed from the bearings. New grease is packed in, and brushes are checked and replaced if necessary. 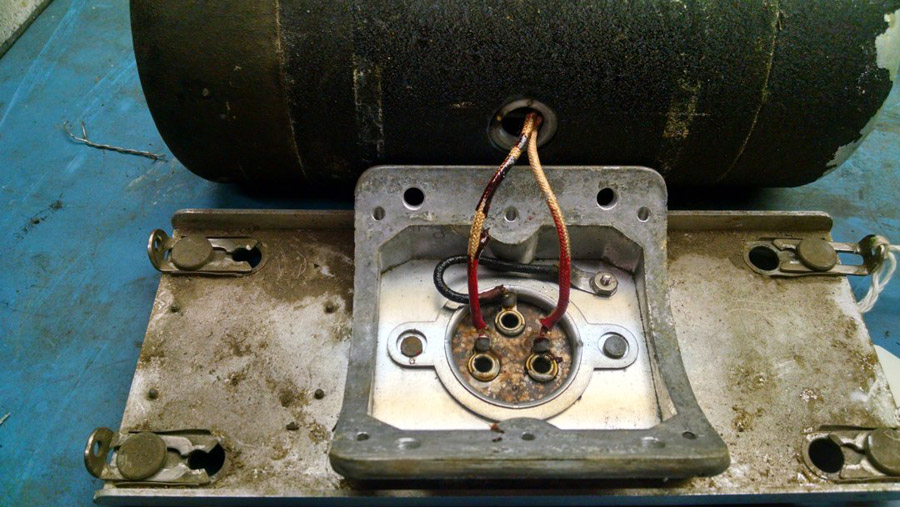 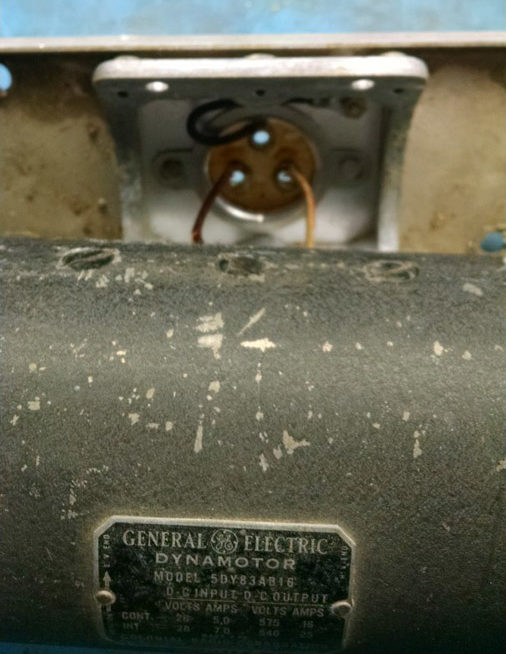 The dynamotor converted the 24 volts available in the generator/battery circuits into the much higher voltage required to power the tube radios in use during WWII. John Castorina photo

If needed, the exteriors are stripped and repainted in black wrinkle, then inspection markings are re-applied using custom rubber stamps which duplicate the factory markings. The same basic electrical and cosmetic restoration process is performed on each of the accessories – transmitter control box, receiver remote tuning box, antenna relay, and each of the mounting bases. Once complete, the units are partially re-assembled and integrated testing of the SCR-274N set can begin. 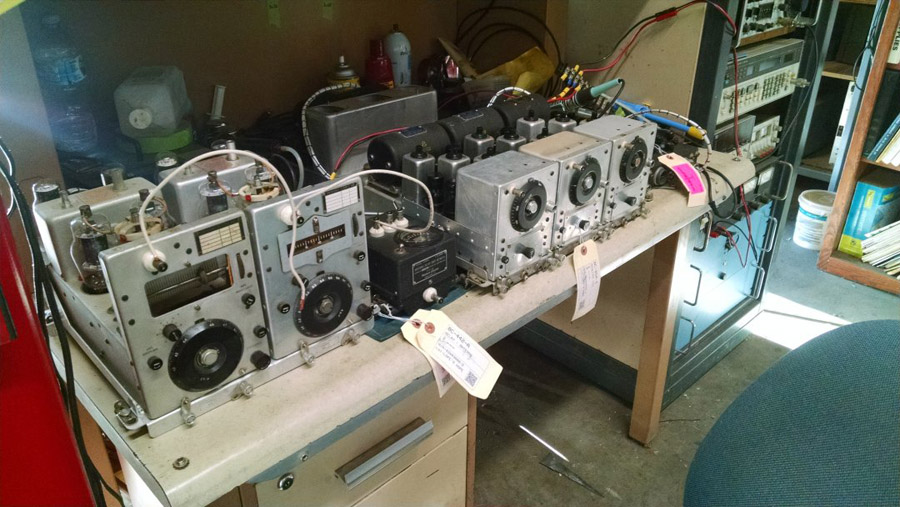 Integrated testing in progress, on the left are the two transmitters, on the right are the 3 receivers that make up the main communications components in the P-47. John Castorina photo

The initial test consists simply of applying power to each unit, listening for defects in the dynamotors and observing that none of the magic black smoke gets out of any part of the radio set.

Now a functional test – headsets and signal generators are connected to the receivers, power meters are connected to the transmitters, then a check is made of each unit that basic functions are working. Units which fail this check are isolated and repaired as required before continuing with the test procedures. It is worth mentioning that out of at least 20 transmitters and receivers I’ve restored, I can think of only a couple of units that did not work the first time at this point – pretty good considering the age! 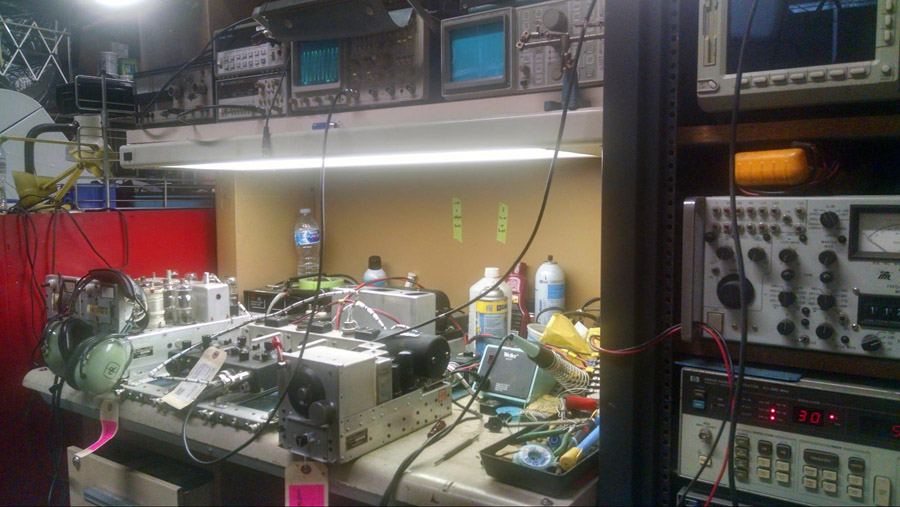 The radio system is being tested on the bench. John Castorina photo

Using modern digital test equipment, each unit is then tuned for performance to be equal to or better than the factory specifications. This involves precise measurement of receiver sensitivity, dial calibration, transmitter power output across the tuning range at multiple frequencies, audio output and distortion.

All units are then fully re-assembled with their covers and all screws (seems like hundreds of them) and then a final test is performed prior to packing them for shipment back to AirCorps Aviation. 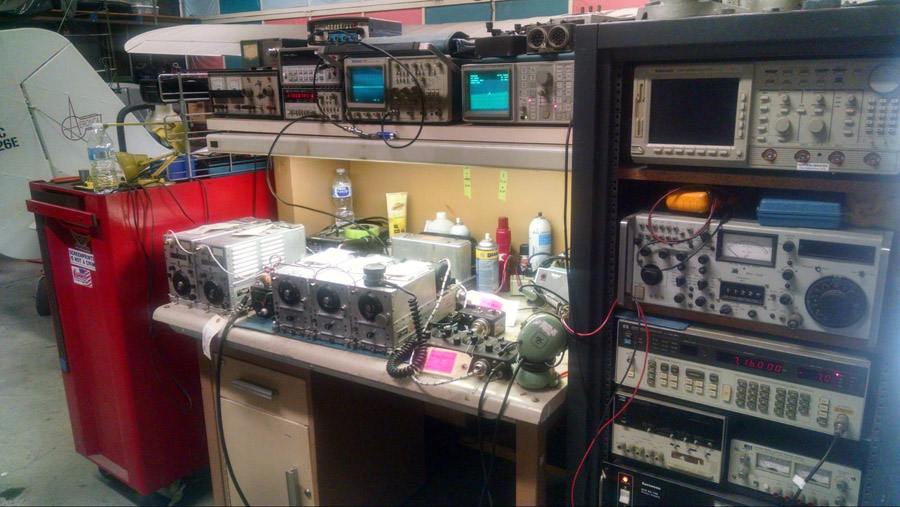 When the Dakota Air Museum’s P-47 is complete, licensed amateur radio operators will be able to demonstrate the capability of the SCR-274N using AM (amplitude modulation) voice communications on the 40 and 80 meter ham bands ! (7175 and 3985 khz respectively)

Special thanks to John Castorina for taking the time to write this excellent report on the radio system restoration.

The Pratt & Whitney R-2800 was the engine used in P-47s and many other WWII fighters, bombers, and transports. 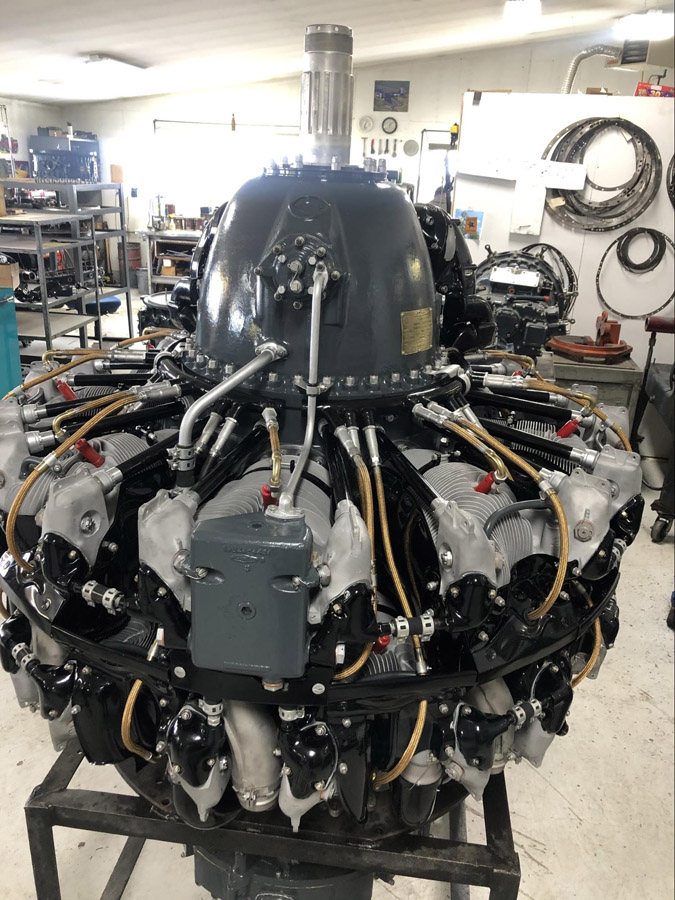 The R-2800 is an eighteen cylinder, double row, air cooled radial engine. The cylinder bore is 5.75 inches and the stroke is 6.0 inches, resulting in a total displacement of 2804 cubic inches.

To give a rough analogy of the sheer size of the cylinders, consider that one cylinder of an R-2800 displaces slightly more than the entire standard four cylinder engine in a Ford Fusion or Toyota Camry.

The version used in the P-47D-23 RA was the R-2800-59. The Dash 59 had General Electric magnetos, a single stage, single speed supercharger integral to the engine, with additional boost provided through the complex ducting of the General Electric C-23 turbo supercharger system, and water injection. It was rated at 2300 hp when in war emergency power setting with ADI (anti detonation water injection)1

Some have called the Pratt & Whitney R-2800 Double Wasp engine the most significant aircraft engine built in the United States during WWII.2 Like so many statements of this type, it is certainly debatable. However, a great case can be made for this superlative.

It wasn’t the most powerful, didn’t have the best power to weight ratio, and wasn’t the most technologically advanced. But the R-2800 was near the top in all of those characteristics. The big radial was legendary for taking incredible damage and continuing to run. It was exceptionally reliable, cheaper and easier to maintain than an Allison or Merlin, and had relatively low specific fuel consumption for its size and power.

Despite not being the absolute best in any one category, this combination of qualities produced an engine so useful that it powered many WWII combat aircraft and after the war both the military and commercial airliners used it for quite some time. 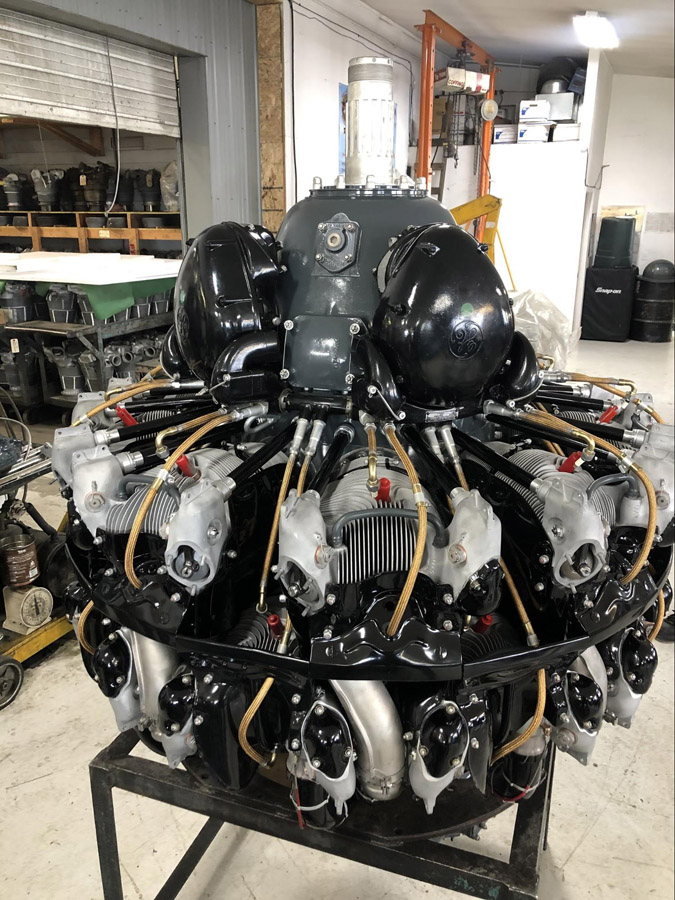 The General Electric company logo is visible on the magneto. They are two black, turtle shell shaped units bolted to the green front case. 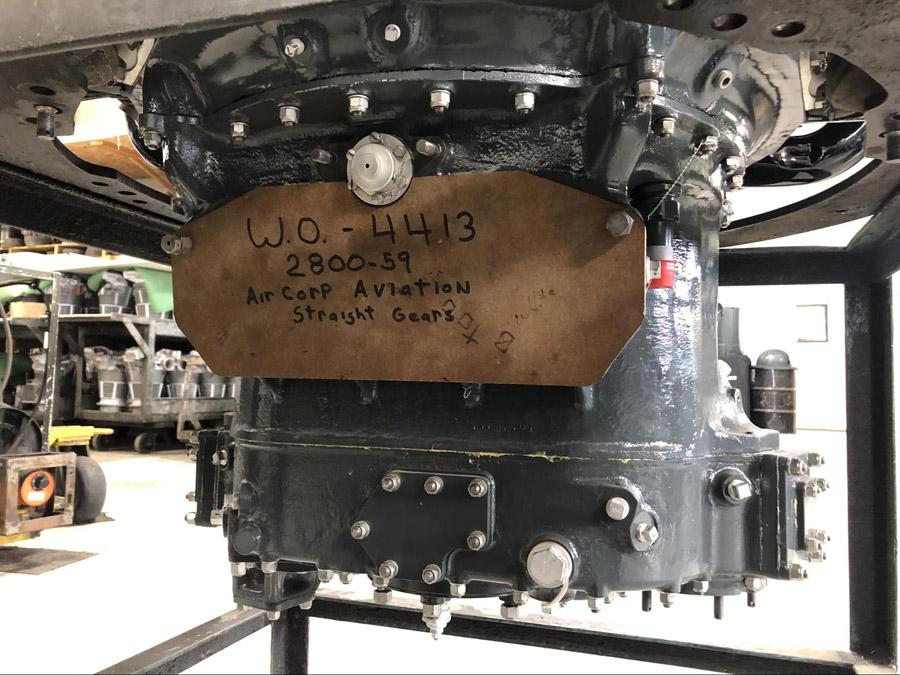 A work tag is attached to the supercharger in this image.

A few of the best known R-2800 powered aircraft were: