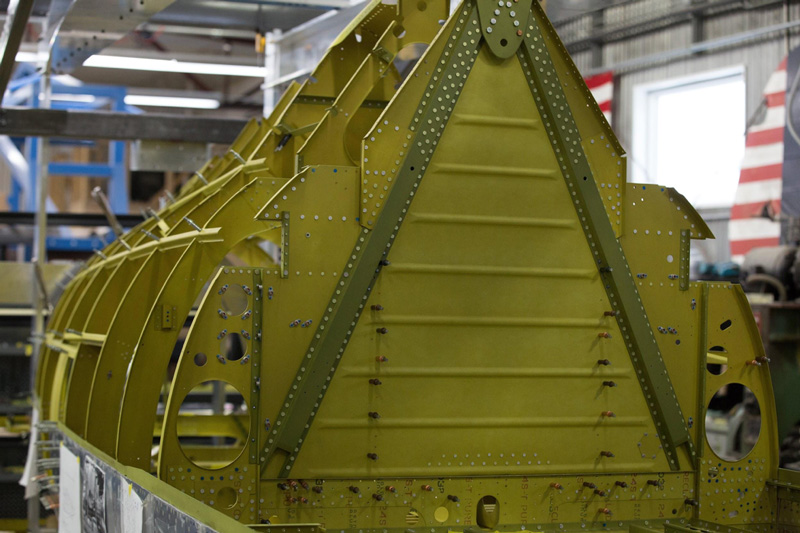 A restoration like this one requires repeated fitting, trial assembly, disassembly for painting, and eventually permanent reassembly. This month was all about details as the guys take care of final touches before disassembling the upper fuselage for deburring and paint. Once this is finished, the next step will be permanent reassembly.

The reassembly process requires that parts are prepared, inspected, and restored as necessary, and ready when the time comes for their installation. Because of that, parts preparation is a continual process that ensures smooth progress on the restoration.

The internal fuselage structure needs to be protected with zinc chromate, as was done at the Evansville factory.

The frame and window panels of the Razorback model are a complex assembly.  George and Ryan have been working at getting the parts ready for when that assembly becomes needed.

Putting it all Back Together

Early Development of the P-47

The Thunderbolt story began with a bit of commercial diplomacy.

1Alexander de Seversky, a Russian WWI combat ace, visited the American aircraft industry as a representative of the Czarist Russian government during the closing months of WWI. During his visit, the success of the Bolshevik revolution made a return to his homeland extremely hazardous. In fact, news of mass executions of former Czarist officers by the Bolsheviks made the decision to apply for American citizenship a logical and clear choice for de Seversky. He became a naturalized citizen by 1927.

During the citizenship process, de Seversky worked as a test pilot for the United States Army Air Service, and an assistant to General Billy Mitchell. In 1922 he established the Seversky Aero Corporation to manufacture aircraft parts, notably a successful bomb sight of his own invention. The company did not make complete aircraft, and went out of business following the 1929 stock market crash.

However, the financial crash did not stop Seversky, and in 1931 he secured financial backing and founded the Seversky Aircraft Company to build aircraft for the military market. Major de Seversky brought in fellow Russian emigre’ Alexander Kartveli as chief engineer in 1934. The company’s first entry in a US fighter design competition was a landplane fighter development of their SEV-3 floatplane. It wasn’t successful in winning the contract.

Kartveli went back to the drawing board and designed the SEV-1XP, which won the 1936 fighter design competition. The U.S. Army Air Corps (USAAC) designated the fighter P-35, and it was the first USAAC production, single-seat, all-metal pursuit plane with retractable landing gear and an enclosed cockpit.2 The P-35 was the progenitor of a line of fighters that led to the P-47, notably including the P-43 Lancer, a fighter that incorporated a turbo-supercharger.

By 1939, De Seversky had lost his company because of financial mismanagement. The company was reorganized and renamed the Republic Aviation Corporation. Alexander Kartveli stayed on as vice president of engineering, but Seversky was out.

At the time, Republic was working on the designs of two lightweight fighters: the XP-44 Rocket, similar to the P-43, but re-engined with a Pratt and Whitney R2180-1 of 1400 horsepower, and the little known XP-47A, powered by a 1150 hp Allison V-1710-39 liquid-cooled in-line engine. The XP-47A was originally conceived with only two .50 caliber guns and would have weighed 4900 pounds at gross weight.

Feedback from combat areas made it clear that heavier armament, armor protection for the pilot, and self sealing fuel tanks were a necessity in the existing combat conditions.

These new requirements prompted the USAAC to hold another fighter design competition. The requirements specified that the fighter must have a ceiling of 40,000 feet, a speed at 25,000 feet of 400 mph, at least six (and preferably 8) .50 caliber machine guns, protective armor plate for the pilot, and self sealing fuel tanks with a minimum capacity of 315 gallons.3

Kartveli realized that the designs he was working on had no chance of attaining those requirements, and again went back to the drawing board. The result was a new and completely different design incorporating the 2000 hp Pratt and Whitney R-2800, the most powerful aircraft engine yet developed in the US. Also part of Kartveli’s brainchild was a turbo-supercharger system that made meeting the high altitude specifications possible.

The Army Air Corps was impressed enough to order a prototype on September 6, 1940 and designated the type with the same “P” number as the XP-47A, a highly unusual event for an entirely new design. Accordingly, the XP-47B prototype, became the first in the long line of WWII Thunderbolts. 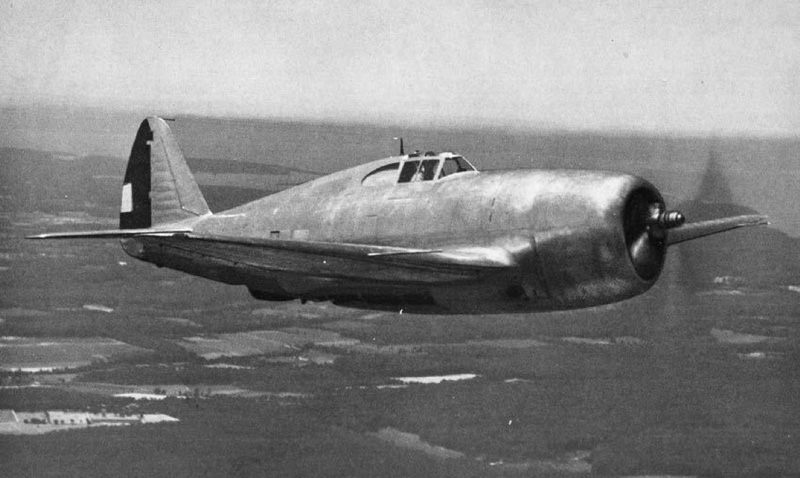 More history of the Thunderbolt next month.

A new feature of our update this month is a time lapse as the guys reassemble the rear upper fuselage after painting the interior structure. 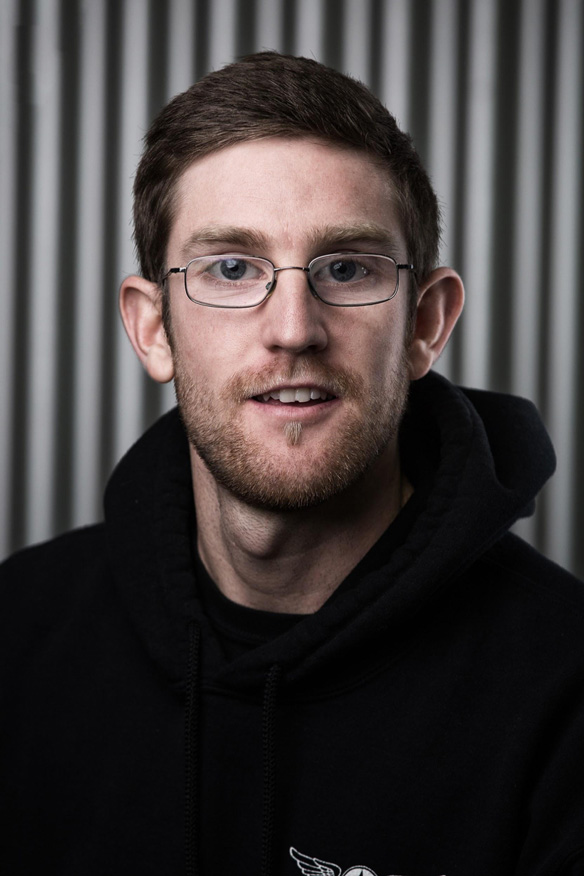 Our restoration parts coordinator, Sam Walsh, came to us from Solvang, California on the central coast near Santa Barbara.

There aren’t many who would commit to such a long distance relocation. Sam joined the AirCorps team in 2014. Since then, he has been a restoration technician, parts team member, parts sales coordinator, and restoration parts manager.

Sam has a Bachelor of Science Degree in Business Marketing Management and Industrial Technology from Cal Poly in San Luis Obispo. He is also an instrument rated commercial pilot, and is the president of the Bemidji Flying Club. Sam is very active in the Civil Air Patrol and EAA Young Eagles program. It is clear that Sam believes in giving back to aviation.

His expertise at finding rare parts, like the gun heaters unique to the P-51C, is one of the many elements that makes Sam an indispensable asset to AirCorps Aviation.

Sam’s favorite warbird is the F8F Bearcat and his favorite memory from AirCorps is his first ride in a warbird he helped restore, the Bush Stearman. Working with folks who are passionate about warbird projects is a high point in Sam’s experience here at AirCorps Aviation.

Seeing the P-47 fly and trips to Oshkosh every year are what Sam is looking forward to.