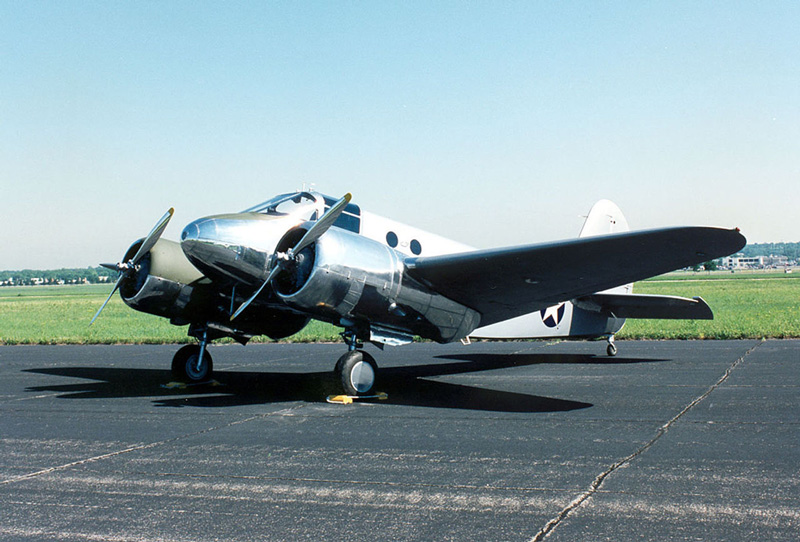 The only complete AT-10 in the world at the National Museum of the U.S. Air Force, USAF photo.

The Beech Model 25 project was designed to provide the Army Air Force with a small, twin engine trainer suitable for developing pilot skills in retractable landing gear twins.  It was to be produced with primarily wood construction because there was fear that aluminum suitable for airframes would become scarce as the war progressed. The original model 25 prototype crashed on May 5, 1941. Despite the accident, the design was promising, so Beech went ahead with further development of the design.  Work on the trainer, now designated Model 26, began the next day. 1

The Wichita, as it was named, was an important step in the development of twin engine fighter and two and four engined bomber crews, acting as an intermediate airplane between light, single engine trainers and the heavy, high performance twins.

Most likely it was completed on that date or a day or two before.  On 5-22-43, she was flown to Freeman Army Airfield, Seymour, Indiana and then on to Blytheville, Arkansas, on 6-24-43, arriving the next day.  There she served until she was declared surplus on 4-6-45. 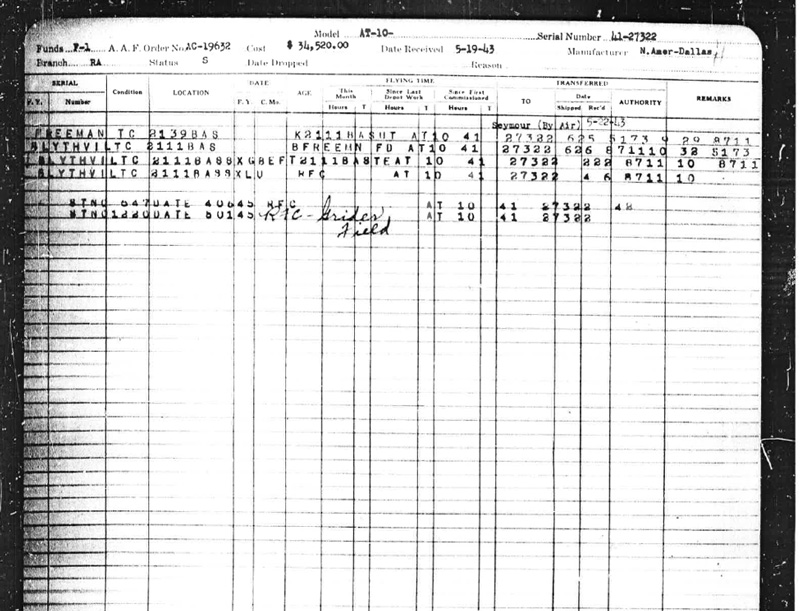 The only AT-10 photo confirmed to have been taken of a Blytheville-assigned Wichita that we have found. Courtesy of Ray Westbrook of Blytheville, Arkansas

There were ten Women Airforce Service Pilots assigned to Blytheville, either from other bases, or after training was completed at Avenger Field in Sweetwater, Texas. The official archive of the WASP is located at the library of Texas Woman’s University and the figures shown in this report come from there.

Most of this group of WASP flew as B-25 co-pilots and AT-10 pilots, but WASP flew over 70 types of aircraft during WWII.  Assignments included engineering test pilots, instrument check pilots, ferrying, and flight checks for returning overseas pilots.  Thirty-eight Women Airforce Service Pilots gave their lives flying for their country. 3

The following pages have information obtained from the pilot cards of the ten Women Airforce Service Pilots who may have flown our AT-10 at Blytheville Army Airfield, generously made available to me by Texas Woman’s University, the nation’s largest university primarily for women.

Continued research into a WASP or other pilot connection with 41-27322 will be conducted with a goal of locating a logbook entry showing that a specific pilot, male or female flew this airplane during World War II.

Dr. Clements was from Elmwood, Nebraska, courtesy of the official archive of the Women Airforce Service Pilots at Texas Woman’s University.

Margaret Bergh came from Tuckahoe, New Jersey and she was a group commander, courtesy of the official archive of the Women Airforce Service Pilots at Texas Woman’s University.

Glenside, Pennsylvania was Patricia Nuckols home before joining the WASP, courtesy of the official archive of the Women Airforce Service Pilots at Texas Woman’s University.

Mary Quist ( Edwards), hometown unknown, courtesy of the official archive of the Women Airforce Service. Pilots at Texas Woman’s University. No “pilot card’ seems to exist for Mary Quist in the archive.

Bethesda, Maryland was hometown to Dorothy Burri, courtesy of the official archive of the Women Airforce Service Pilots at Texas Woman’s University.

Our final pilot is Marjorie Christiansen of Provo, Utah, courtesy of the official archive of the Women Airforce.Service Pilots at Texas Woman’s University

On August 8, 2016, Cadet Air Corps Museum AT-10 Project board members Sam Graves and Brooks Hurst arrived at the AirCorps Aviation hangar at Bemidji Regional Airport bearing “gifts”.  The gifts were, of course, the components saved for many years to eventually use as the backbone in a restoration and rebuilding effort to once again put an AT-10 in the air.

There are no flying AT-10s and only one complete example in existence at the National Museum of the U.S. Air Force, shown in our cover photo.

You may have noticed that the remaining parts of these AT-10s are the metal sections.  Many AT-10s were purchased surplus for the two Lycoming R-680-9 radial engines, usable in Stearman crop dusters, among others.  The airframes were left sitting abandoned at various airfields around the country. Moisture and neglect over the years allowed wood rot to decimate the main portions of the airframe, so the AT-10s, like MacArthur’s old soldiers, faded away.

For those who wonder what a cleco is, it is an easily installed and removed temporary fastener used in aluminum aircraft assembly (among other applications).

Somewhat as a sewing pin is used to hold material together, the cleco functions as a temporary fastener to clamp the aluminum skins to one another or to underlying frame sections as holes are drilled, skins are trimmed, and as other fitting procedures are done.

Originally developed by the Cleveland Pneumatic Tool Company, they are a standard item in any aircraft sheet metal shop.  Color coded, the copper color of these clecos indicates that they are #30 for an 1/8 inch hole.