A sunny Friday drive to Duluth this spring allowed many of us here at AirCorps the distinct pleasure of having lunch with Jervis Van Vleck Heimbach, (who goes by Van), his son, Bob, and grandson, Rob. Van piloted P-51s over the skies of Europe serving in the 319 Squadron, 325th Fighter Group, flying missions primarily out of Italy. Stories of his WWII service left us mesmerized, and provided a glimpse into his experiences from training through being stationed in Rimini, Italy. Though it’s impossible to fully capture and relate the sense of reverence in the room that day, the chance to share a few tales can’t be passed up.

Having enlisted at age 21, Van talked about his advanced training in Mission, TX. While there, he got a picture of one of the commanding officers “flying across a field, upside down, in a P-40 with a pipe in his mouth and his cap on.” Van remembers another C.O. commenting on the stunt, “He might not shoot too many planes, but he’ll scare the hell out of them all!”

Van checked out in a P-40 initially, but then climbed into his first Mustang at Goodfellow Air Force Base in Florida. He remembers “being amazed at how fast the T disappeared in the mirror” when taking off in the faster fighter. He decided to do a couple lazy eights and noticed the engine heating up. Being new to the P-51, Van inadvertently closed the engine coolant control rather than opening it, causing the engine to freeze. Van called the field and reported a dead engine, knowing his team on the ground would prepare for the worst. However, the young pilot then executed “a perfect landing – with all the meat wagons and fire trucks out there ready to pick up the pieces.” Witnesses offered accolades on the landing, but the ego boost was short-lived. The fellow in charge of the flight line asked Van to describe what happened and then made sure the young pilot would forever be well-acquainted with each knob, lever, and button by making him sit in the grounded plane for an extended period. That training plan may have backfired a bit, leading Van to joke that his reaction was “Oh boy, if that happens again, I’m bailing out of that thing!”

While in Italy, Van remembers the airfield from which he flew being located very near a squadron of Tuskegee Airmen flying the famous Red Tails.

Van spent hour upon hour in early model P-51s, commonly referred to as razorback or fastback style. Van wished he would have been able to fly in a Mustang with a bubble canopy during combat due to the increased visibility.

Van Heimbach flew 55 missions in the war and is credited with shooting down a Heinkel He 111, one of Germany’s most important bombers. He won the Distinguished Flying Cross and the Air Medal with five oak leaf clusters.

Despite sharing some of the tales of the fun he and other pilots had buzzing in the Everglades and ticking each others’ wing tips, Van took his duty very seriously and mentioned that he abstained from alcohol so he could be always ready to fly. The fact that his brother, Robert, had been shot down in a bomber near Sweden certainly added to the stake he had in WWII.

Hearing first-hand accounts from Van, and others like him, who lived a history that many of us have only read about or seen in movies, is the greatest blessing that’s grown out of my time at AirCorps. A big thank you to Hans Wronka for helping us make the connection with the Heimbachs. 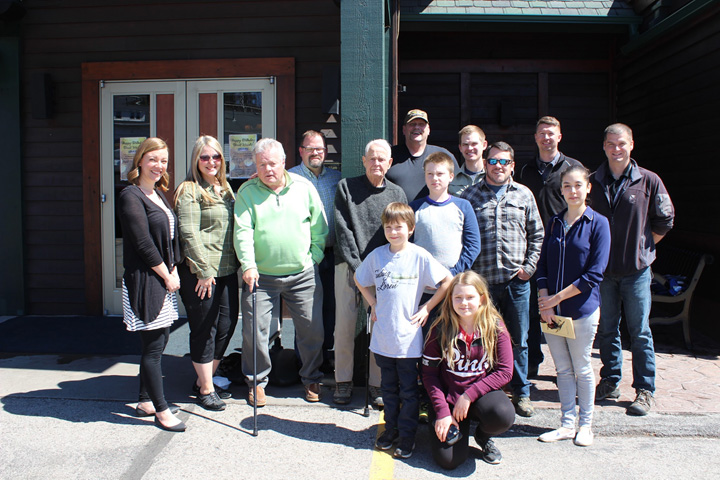