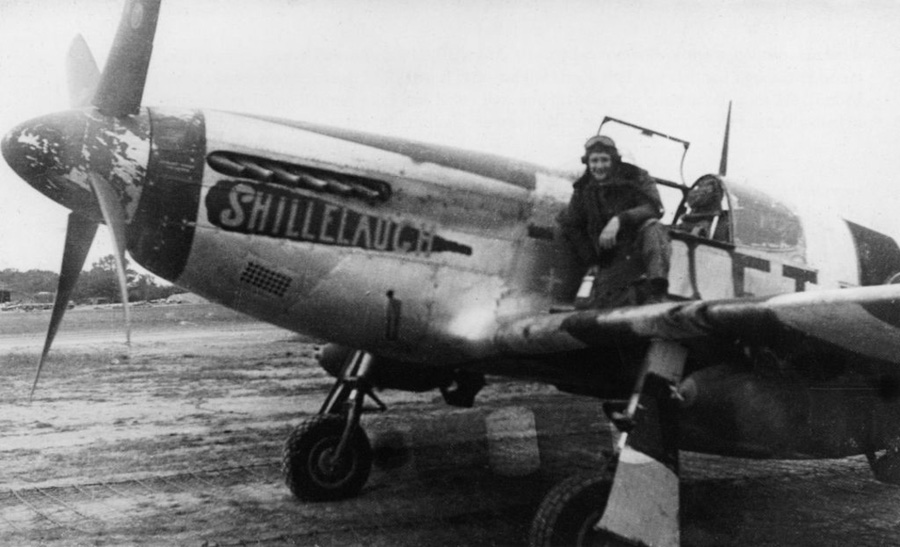 The restoration of Shillelagh honors Ken Dahlberg and his wartime story, as well as David O’Hara, to whom the Mustang was assigned. But a restoration like this also honors the entire squadron the Mustang served in. It is interesting to not only follow the mission history of Shillelagh, but to also note how many different pilots flew this particular Mustang in combat.

The 354th Fighter Group was known as the Pioneer Mustang Group because they were the first to fly P-51B Mustangs in combat, beginning with a mission on December 1, 1943. 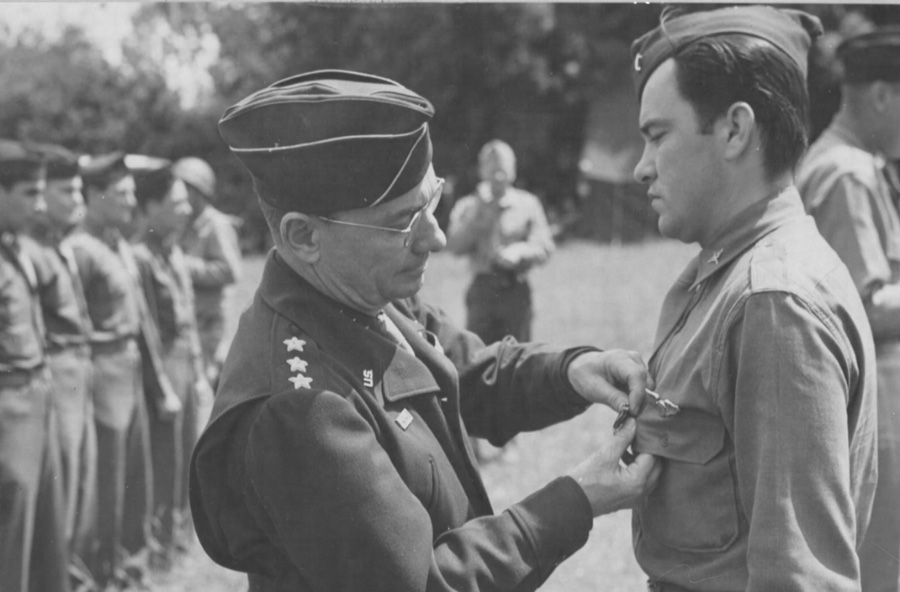 That first mission on December 1st, 1943, was also historic in that it was the very first combat mission for the Merlin-powered P-51. The mission was flown over the Pas De Calais area of France, and it was led by famed 4th Fighter Group pilot, RCAF and Eagle Squadron veteran, Col. Donald Blakeslee. The RAF entered combat with the Mustang Mark III (RAF nomenclature for the P-51B Mustang) on February 15, 1944, when 19 and 65 squadrons flew a similar sweep over the enemy-occupied Channel coast.

Just four months after that historic first mission in December, David O’Hara flew his new Mustang’s initial combat mission on April 15, 1944. He named his new Mustang “Shillelagh” after a traditional Irish walking stick that is often used as a club or cudgel.

There have historically been many styles of stick which have been referred to as a Shillelagh. The earliest known reference dates back over a thousand years.. These sticks were a club that was used extensively for warfare and personal protection. 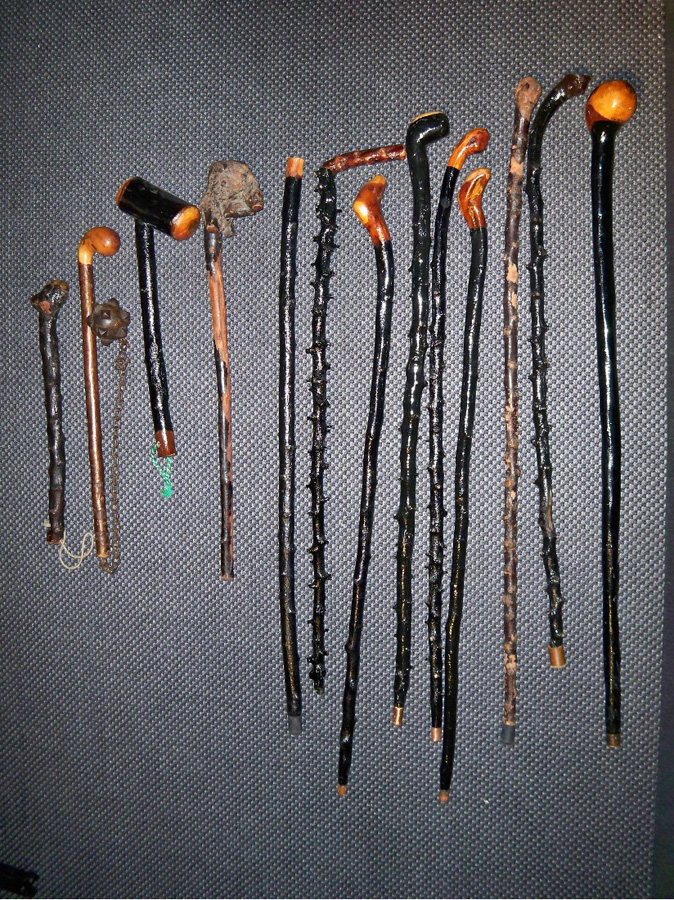 There is a great deal of variety in length, form and configuration of the traditional shillelagh. Photo Wikimedia Commons

When the English established plantations in Ireland during the sixteenth and seventeen centuries the native Irish inhabitants were increasingly pushed back into the mountains. During this period the traditional short shillelagh club was outlawed by English penal codes.

The Irish  responded by lengthening the shillelagh into a walking stick with a heavy end that could still be used as a club.

The shillelagh has deep rooted associations with Ireland, the fighting Irish, and Irish folklore.

The newly named and painted  P-51B-10NA that David O’Hara flew that day is the subject of Wings of the North Air Museum’s latest restoration.

P-51B-10NA 42-106602, Shillelagh (in several different spellings), was scheduled to fly 99 missions over its remarkable wartime career, four of which were aborted, (3 because of coolant issues, and 1 instance when it didn’t take off for an unspecified problem).

Flying 95 missions, and only aborting 4 of 99 scheduled under combat conditions, is an amazing record and a tribute to the ground crews of the 353rd Fighter Squadron.

P-561B-10NA 42-106602 nose art. Shillelaugh originally had nose art that represented a club behind the name, as shown in this profile drawing with the name spelled Shillelaugh. Over the night of June 5, 1944, 1944 full D-Day invasion stripes were applied. Profile illustration by Gaetan Marie

Shillelagh (or more properly Shilellaugh) wore this scheme from April through August 7th, 1944. It always carried squadron marking letters FT-P. The FT identified it as a 353rd Fighter Squadron fighter and the letter P was the individual plane identification.

In August of 1944, the Mustang received a “freshening up” of the paint, The nose art name was now spelled Shillelagh, and the Shillelagh was painted as a spiked club. Profile illustration by Gaetan Marie

The specific date that Shillelagh received new paint and a different spelling of its name hasn’t been found recorded in official USAAF records. But examining the squadron’s combat schedule gives us clues to when this change most likely occurred.

From August 7 through August 10, there were 5 days when FT-P did not fly in combat, this period is the most probable time for Shillelaugh to be sent to a repair depot for maintenance, and to have the upper invasion stripes removed from the wing and fuselage.

The original D-Day invasion stripes were clearly visible from the air and ground, and were intended to prevent friendly fire during the D-Day invasion. Two months after the invasion, the greatest remaining threat came from nervous Allied ground gunners, and from enemy fighters. The upper stripes also compromised camouflage when on the ground. Therefore, removal of the stripes on the upper surfaces was allowed by the Supreme Headquarters Allied Expeditionary Force (SHAEF). The upper stripes stood out when viewed from above, so they were removed to reduce the risk of enemy fighters spotting Allied planes and diving to attack from a position of altitude advantage. The lower stripes were retained so Allied ground gunners could easily recognize friendly planes. By August of 1944, most were gone.

By early August of 1944, 42-106602’s had completed 90 combat missions and needed a bit of refurbishment. Besides the maintenance and removal of the invasion stripes; the paint and nose art were refreshed with a change in the nose art from a club to a mace, along with change in the spelling of Shillelaugh to Shillelagh.

Pilots Who Flew Shillelagh into Combat: 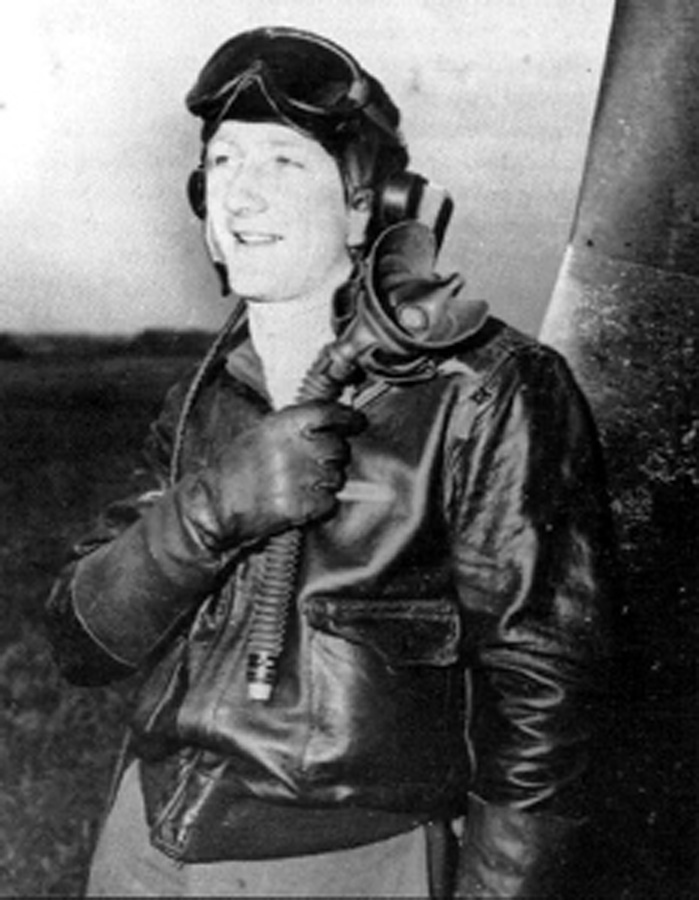 The Shillelagh restoration is a tribute to Ken Dahlberg, who was shot down in this Mustang, and to David O’Hara, who was assigned 42-106602 as his personal P-51.

But it will also pay tribute to the 18 other pilots of the 353rd Fighter Squadron and the 354th Pioneer Mustang Group who flew Shillelagh into danger over Europe in 1944. 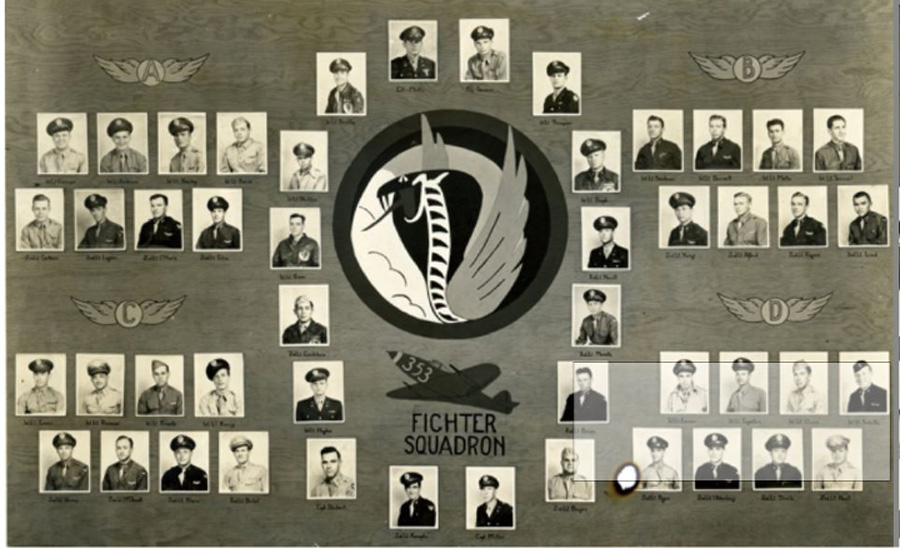 353rd Fighter Squadron pilot board. This image can be more easily examined and selectively enlarged on the 354th Fighter Group website: http://www.354thpmfg.com/history_pt1_353rdfs.html, accessed 11-9-2021

In all, the list includes twenty different pilots who climbed into Shillelagh and flew off on combat missions. Seven of those twenty pilots had attained ace status before the war ended, and four of them had double digit victory tallies. 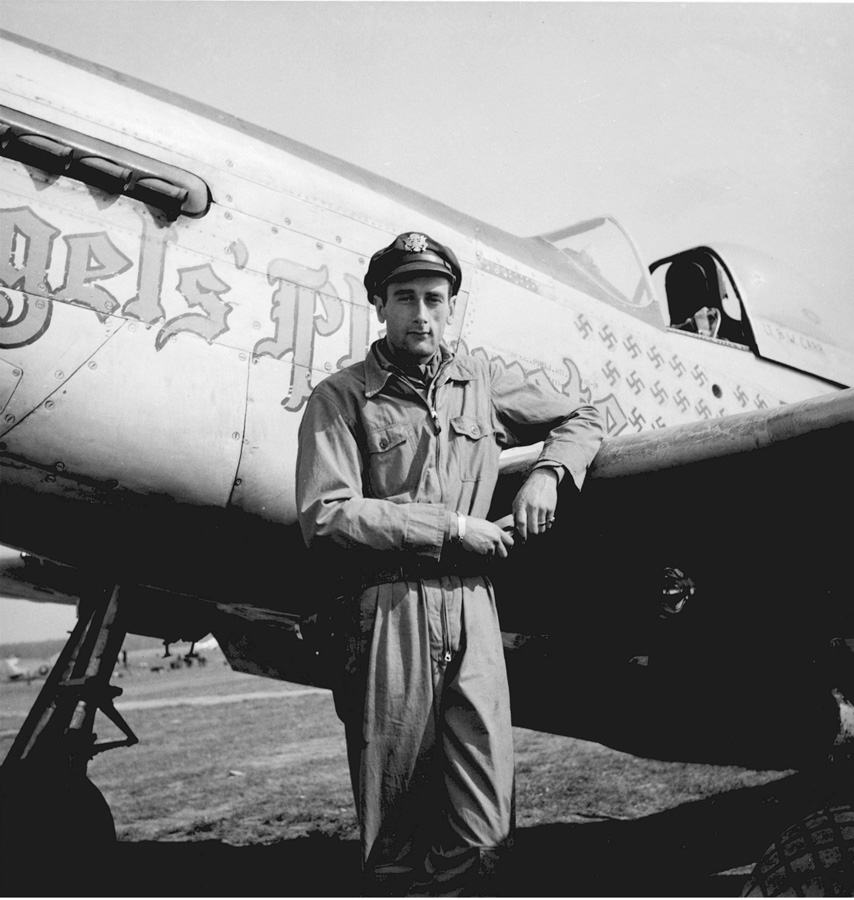 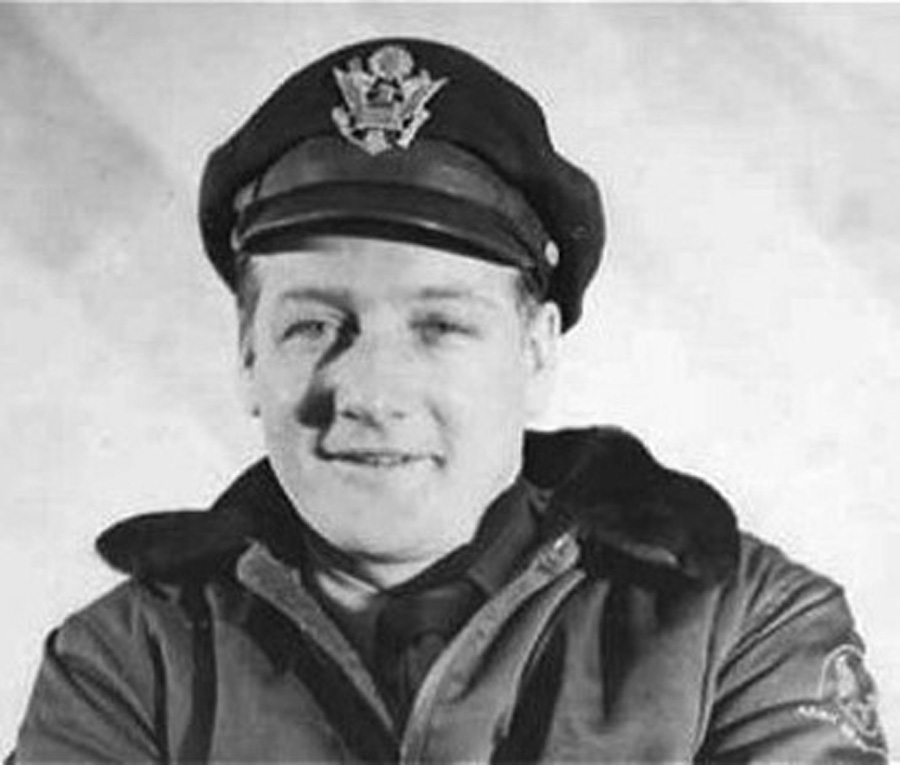 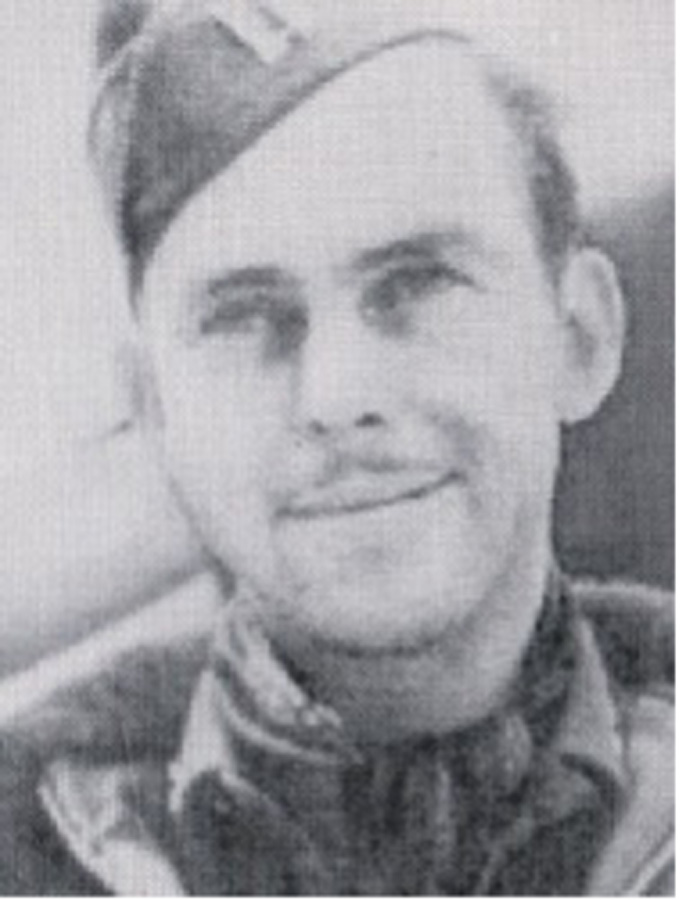 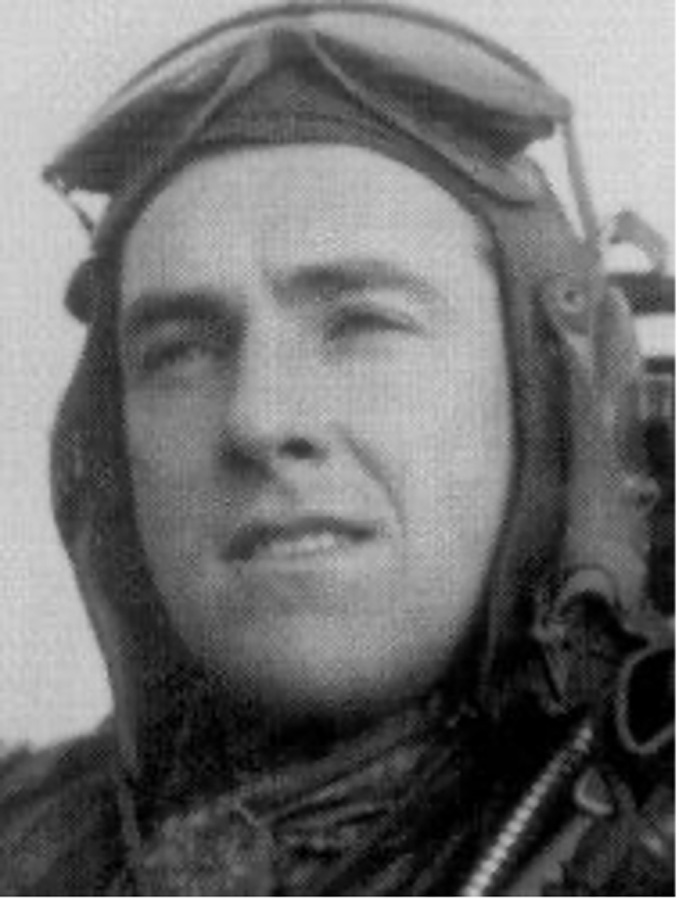 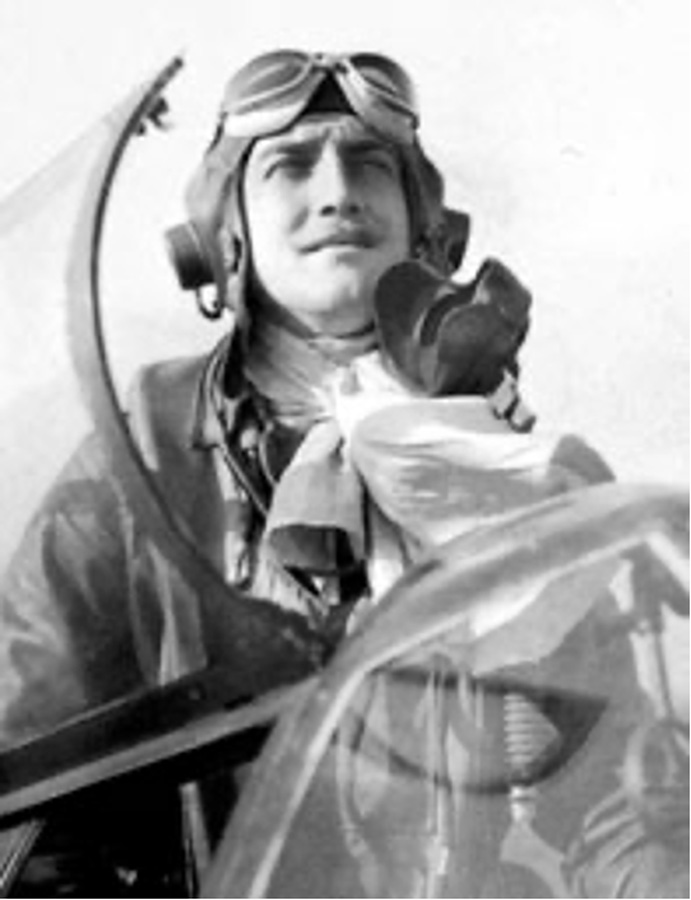 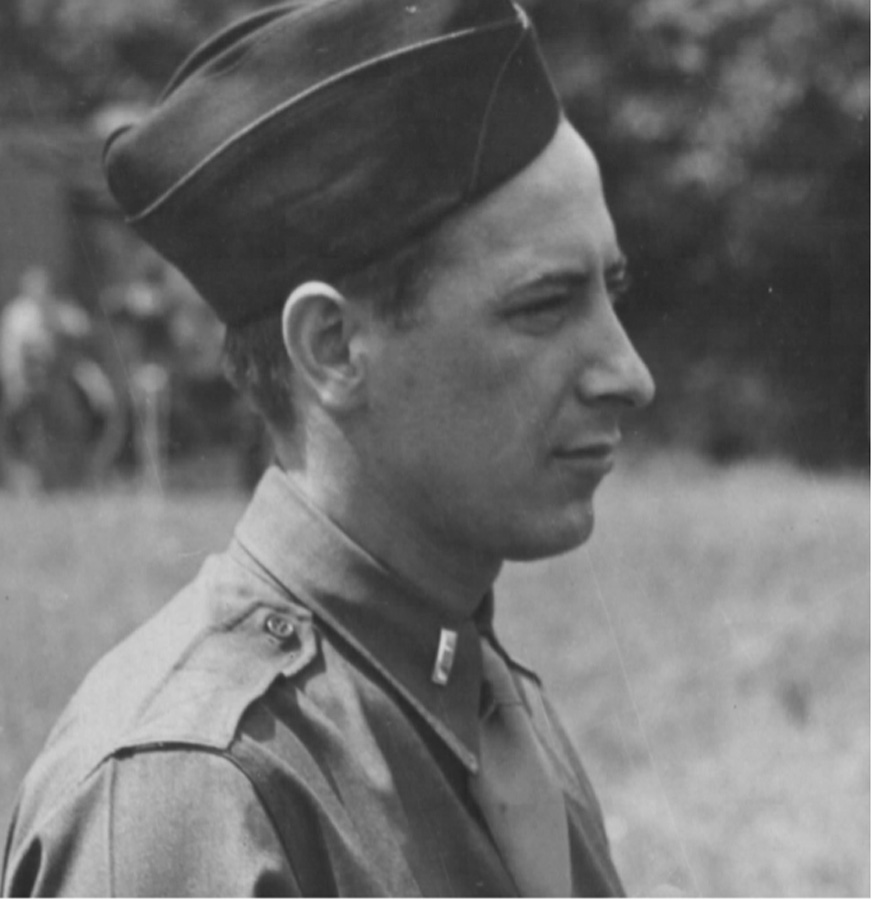 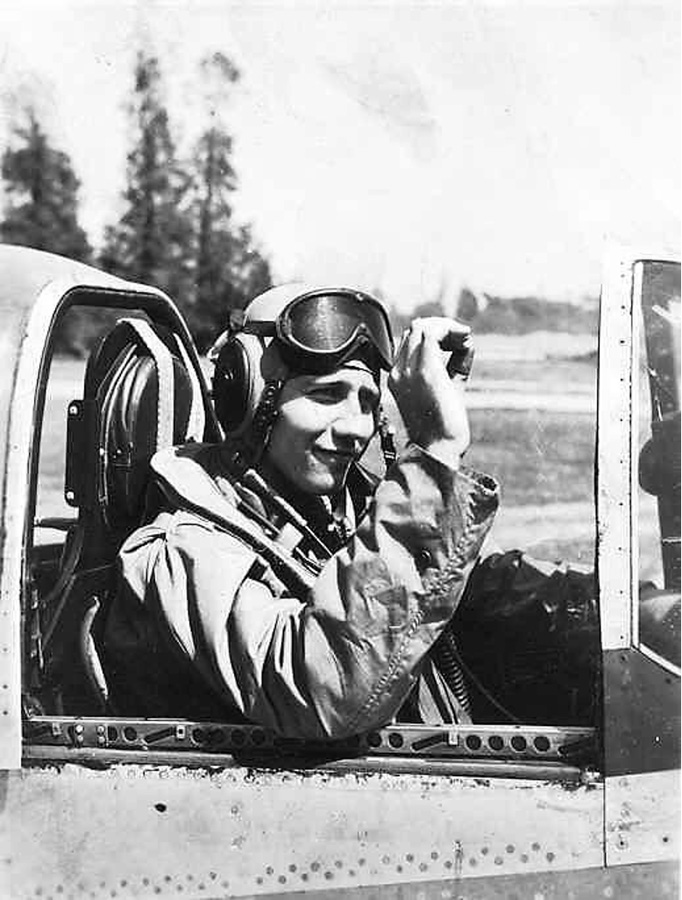 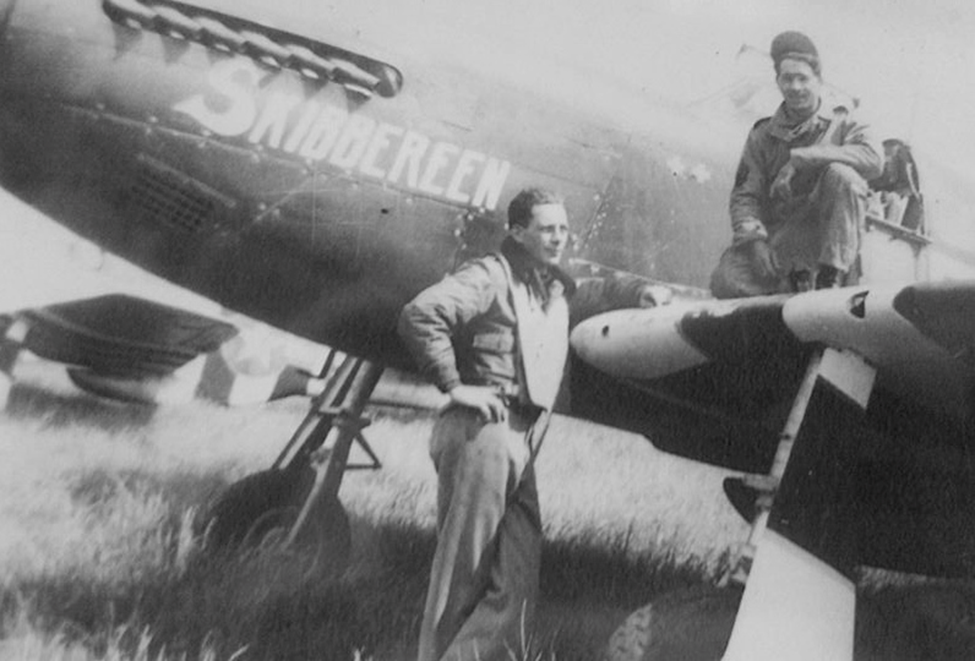 Of course, the most frequent pilot was David O’Hara, since Shillelagh was assigned to him.

In descending order of the number of combat missions flown in Shillelagh, the pilots were as follows:

Combat mission reports of the 353rd Fighter Squadron, 354th Fighter Group provide us with listings of all missions that P-51B-10NA 42-106602 flew. Shillelagh was assigned to the 9th Air Force on April 13, 1944, and then to the 354th Fighter Group, 353rd Fighter Squadron. The P-51B was assigned to David O’Hara and, as noted earlier, he flew the first listed combat mission with the 353rd on April 15, 1944. The Squadron code assigned was FT-P.  O’Hara’s previous Mustang, also coded F-TP, and named Shillelaugh, had gone missing in action on April 11 while being flown by Lt. Ralph A. Brown. Brown survived, was captured, and spent 13 months in Stalag Luft 1, Barth.2

353rd Squadron missions formations were typically made up of between 4 and 16 fighters.  The formations were divided into flights. Each flight (normally four fighters) of a squadron formation was assigned a color code.

These color codes indicate the position that the pilot was to fly within formation.

The 353rd’s combat schedules frequently listed the flight color codes.  In all that listed them, the colors were listed in the order red, white,  blue, and green. It is an order that would be easy to remember for any USAAF pilot. So it is a reasonable assumption that the lists that did not write out the color code of each flight probably followed the same convention.

Making a list in the order that the American flag colors are normally named , and then adding green to make up the standard squadron maximum complement of 4 flights makes sense.

On the last mission listed above on 8/16, O’Hara was flying FT-T mission 205, also to Mantes – Etampes – Chateau Dun. After crashing on the 16th, Dahlberg escaped with help from the French landowners of the Chateau he landed on. No official Escape & Evasion Report, German J Report, or Missing Air Crew Report was ever filed for Dahlberg, meaning that the pilot did report back within 48 hours of being shot down, and most likely being within territory that the Germans would not have undertaken salvage operations. Dahlberg returned to combat on 8/25/1944, mission #215.

Other notable events for Shillelaugh in 1944 include (in chronological order):

Video by Wings of the North

The restoration of 42-106602 Shillelagh is in the early stages of visible assembly progress, but a great deal has been done in the area of original North American parts procurement, and fabrication of other parts before actual assembly can begin.

One of the first major components to be assembled is the tail cone. The tail cone is one of the three main sections of a P-51 fuselage. 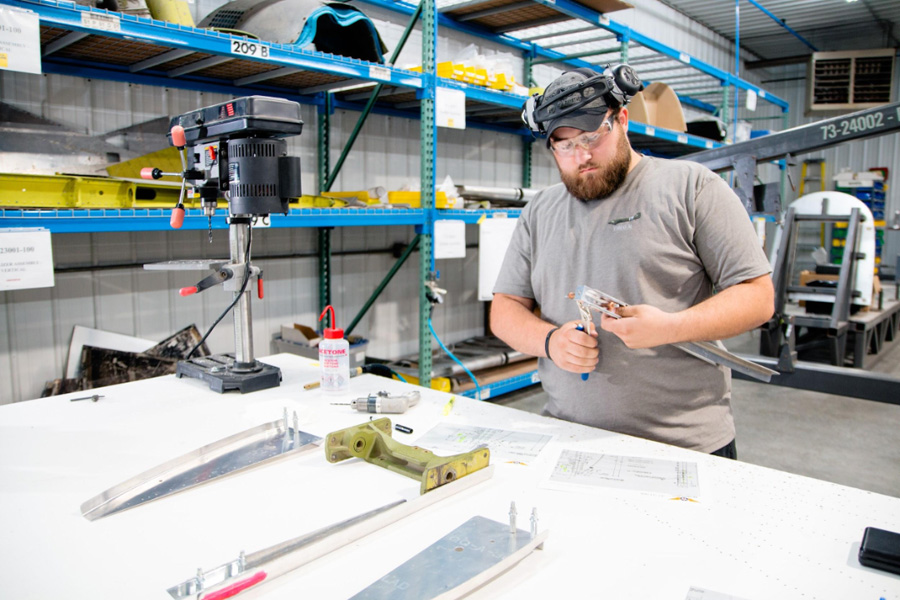 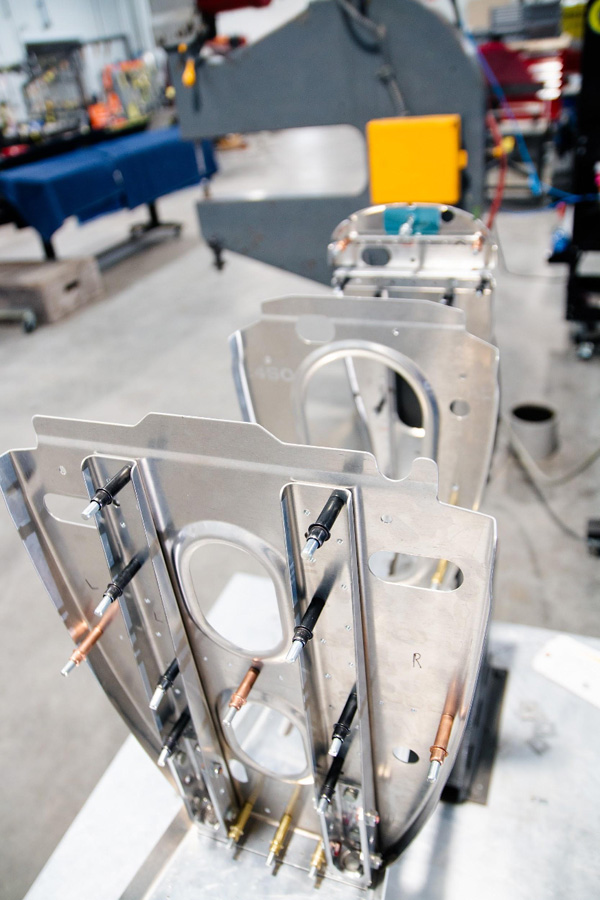 The first fuselage formers are in place in the fixture. 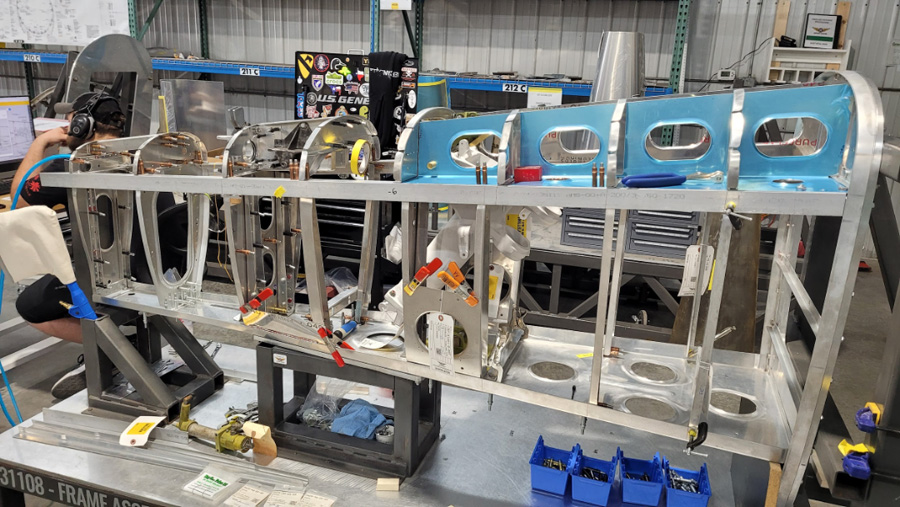 The tail cone assembly begins to take shape in the fixture.

Another component that is one of the earlier assemblies in this restoration is the horizontal stabilizer. 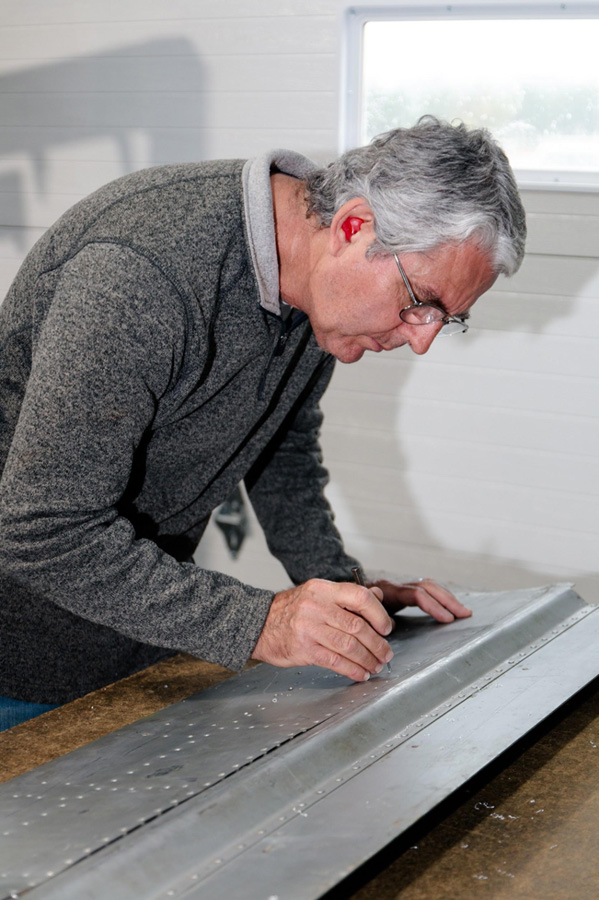 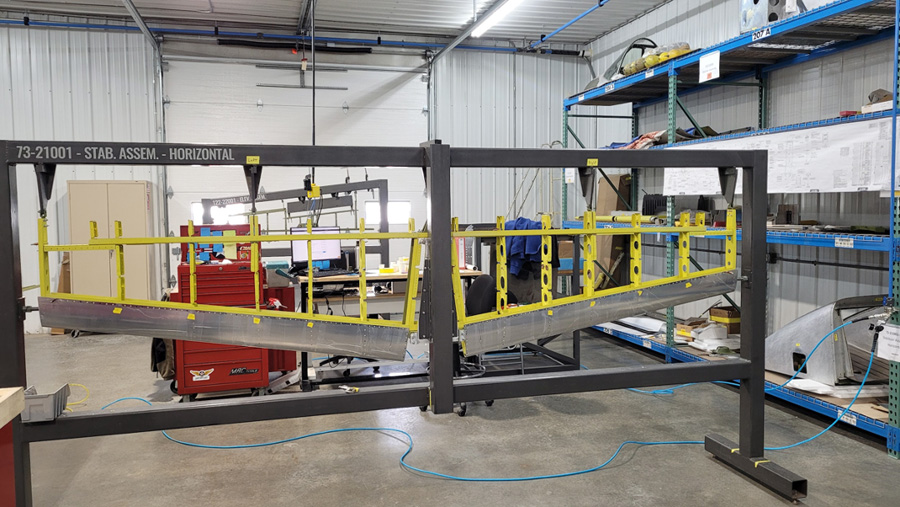 The horizontal stabilizer in the fixture after the ribs and spars have been painted. 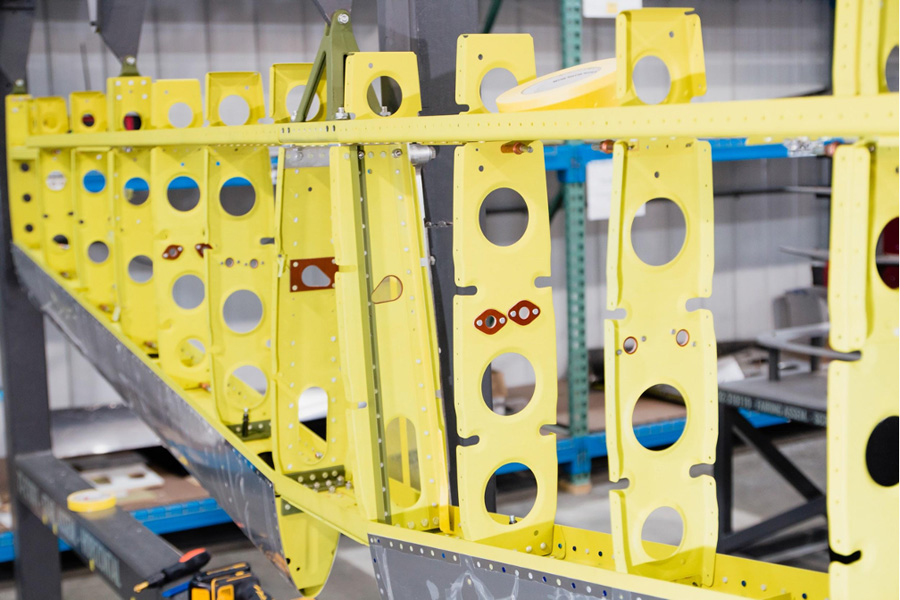 Here is a closer view of the horizontal stabilizer structure. 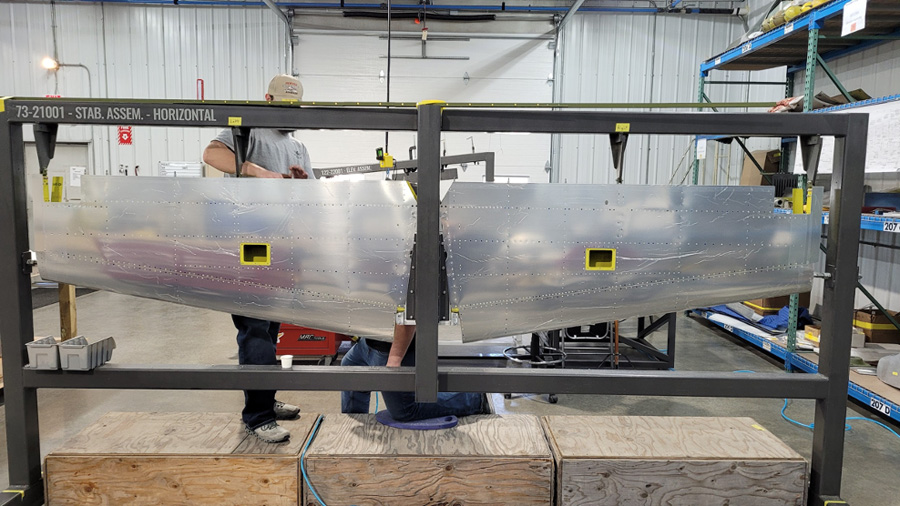 After the painting was completed, the horizontal stabilizer had its skins riveted on. 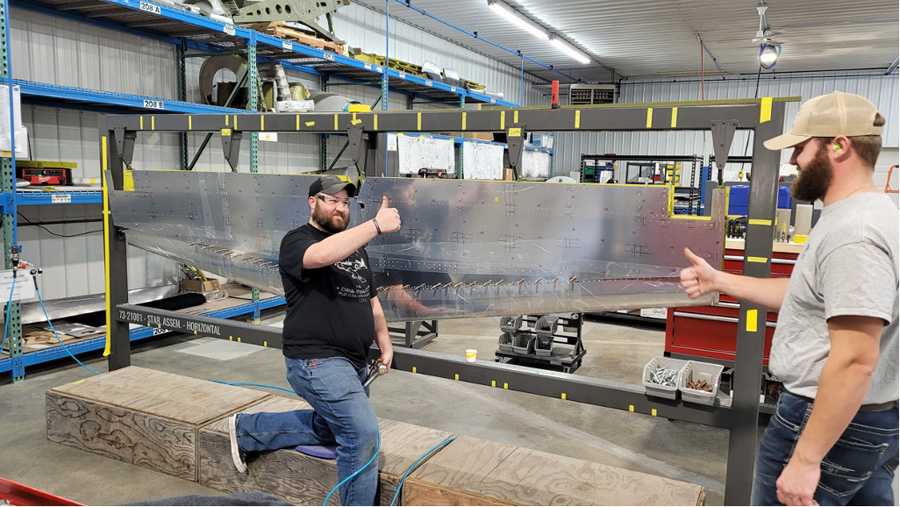 Theo and Neil seem happy with the completed horizontal.

One of the fascinating parts of restoring a fighter built in the 1940s is that sometimes the factory workers signed parts they worked on. The horizontal stabilizer used in Shillelagh’s restoration is a good example of this. Upon disassembly, Richard found the grease pencil signatures of two women who worked at North American Aviation building the Mustangs that would play such a big part in winning WWII.

Their names were Tina Page and Rosemary O’Toole. Their signatures were found on one of the spars inside the horizontal stabilizer. 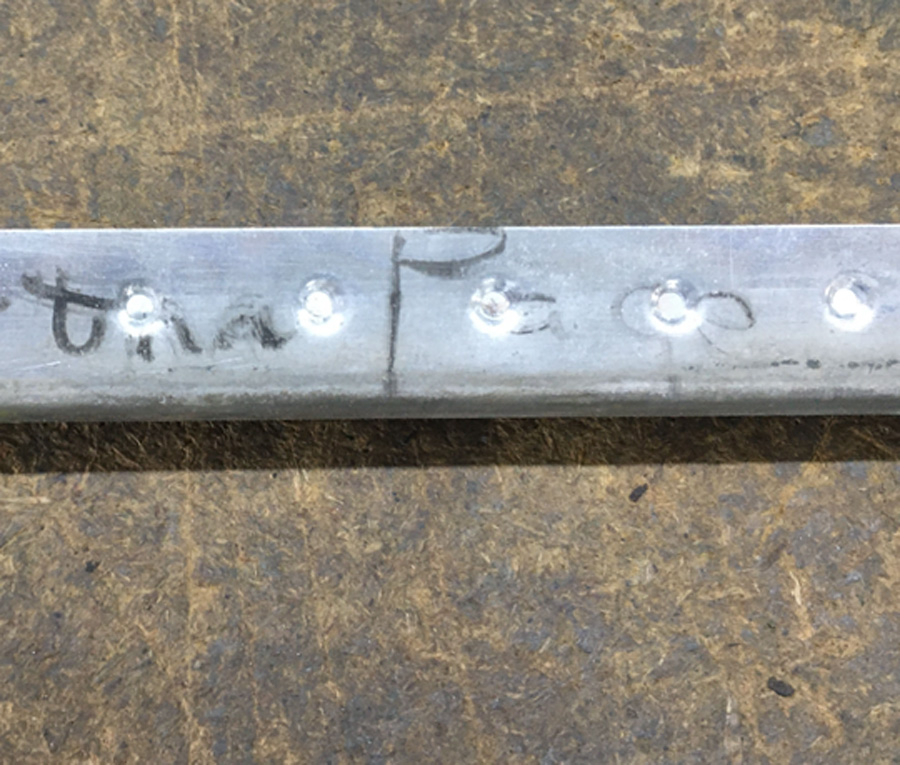 A close view of the spar makes it easier to read the last three letters of Tina Page’s last name. 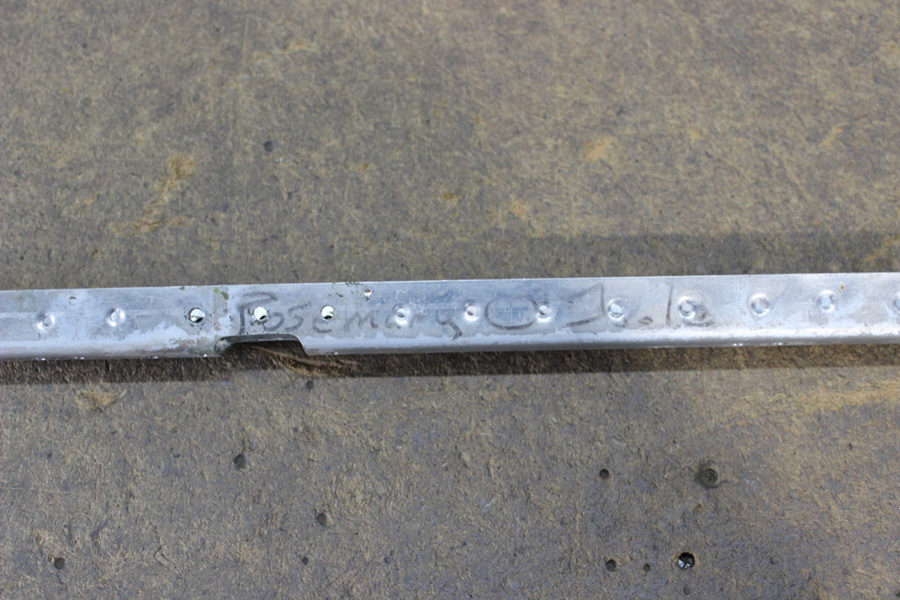 Rosemary O’Toole’s signature on the other side takes up more space. 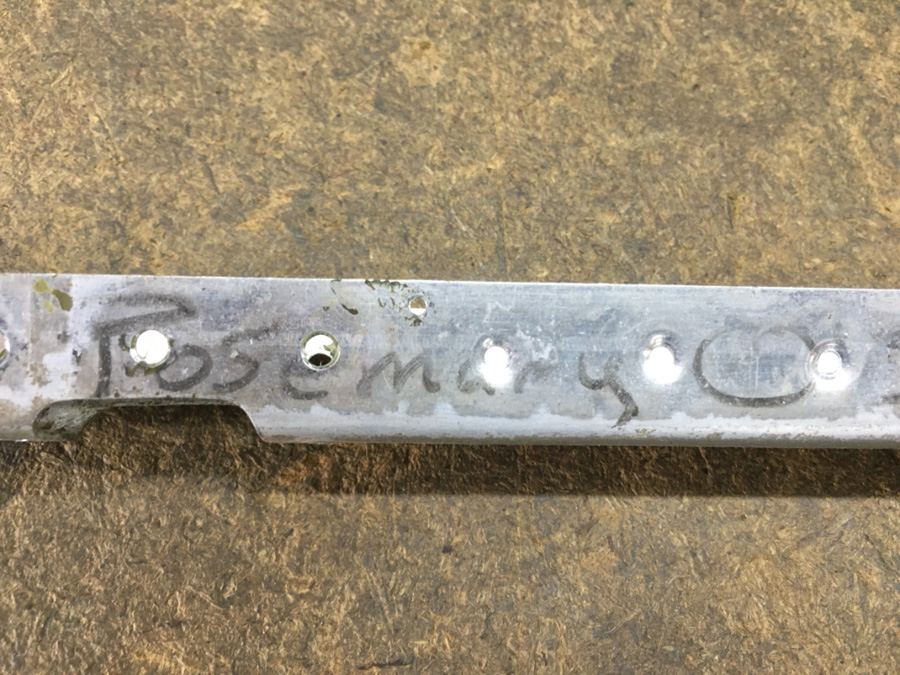 Here is a close-up of Rosemary’s first name.

Upon inspection, these spars were not found to be airworthy, but the signatures will be faithfully duplicated on the replacements. 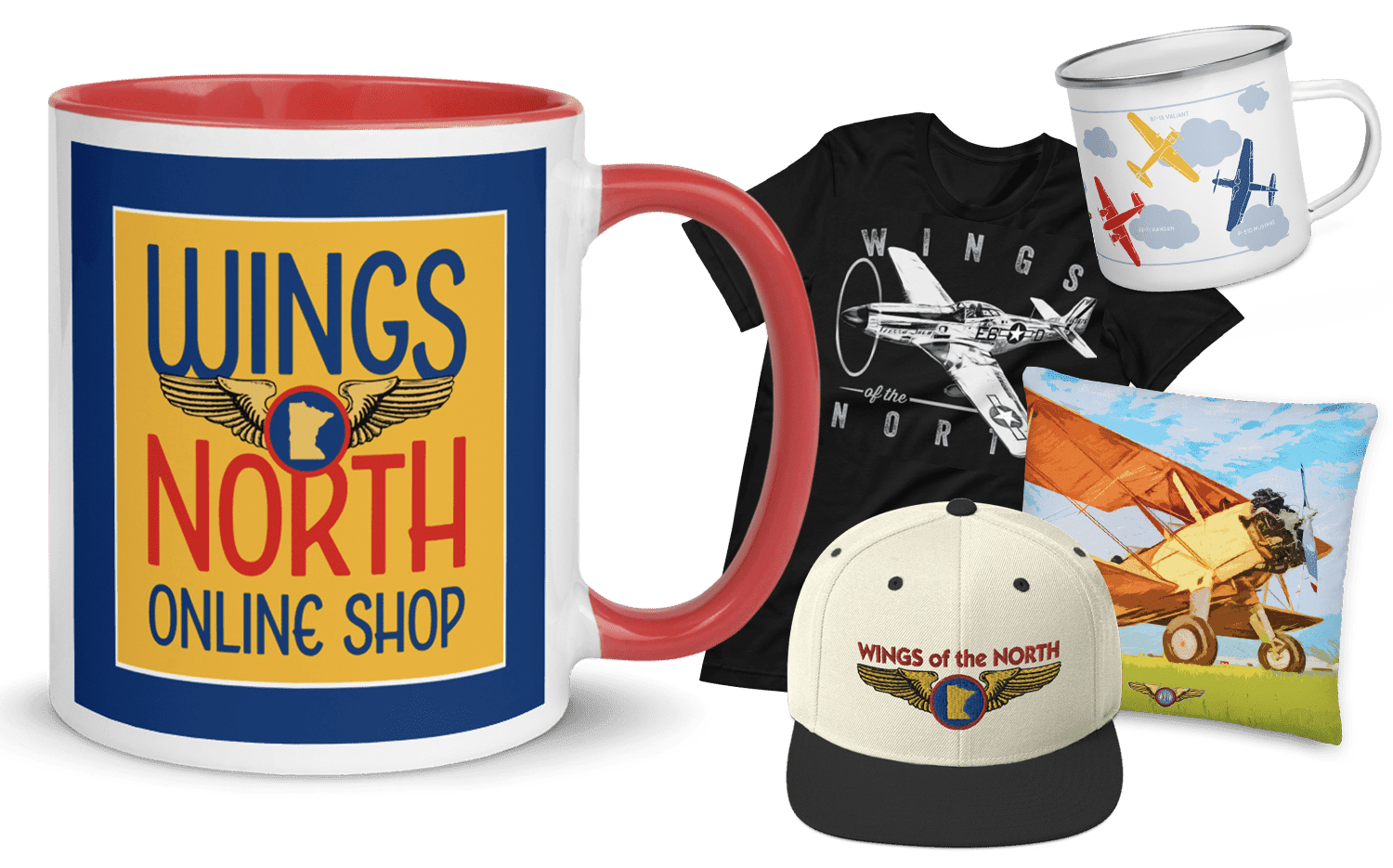 SHOP 'TILL YOU DESCEND!

Wings of the North has you covered for unique aviation gifts, take a look! All profits go towards making the museum collection accessible and affordable for everyone.